From the UAE to the USA via Libya. Trophy "Pantsir-S1E" and its history 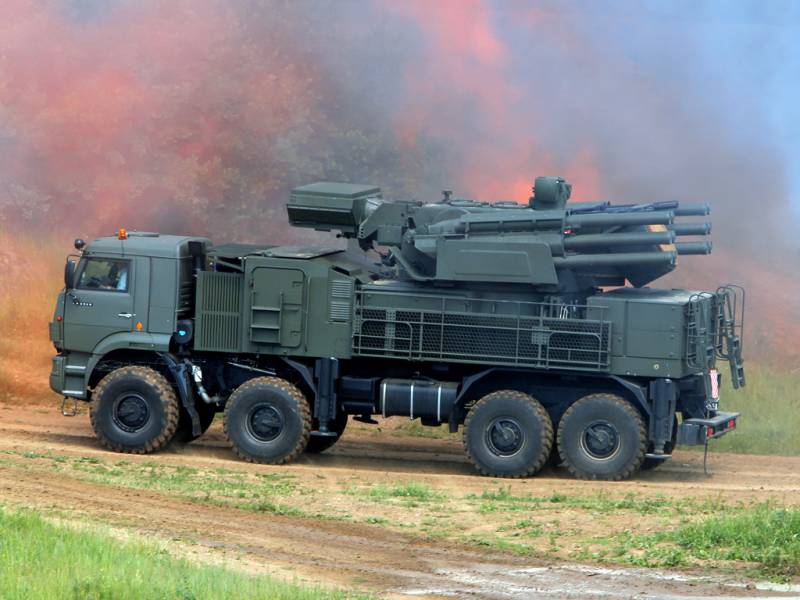 A few days ago, information appeared in the foreign press that the United States was able to obtain a Russian-made Pantsir-S1E anti-aircraft missile-gun system. This combat vehicle was taken out of Libya and is now planned to be shipped to American territory for further study. Let's consider this situation in more detail.

The design of the ZRPK 96K6 "Pantsir-S1" was completed by the mid-nineties, but due to financial problems, the completion of all necessary work and acceptance into service were postponed indefinitely. At the end of the decade, a foreign customer was found who expressed their readiness not only to purchase ready-made equipment, but also to finance the completion of development work.

The first foreign buyer of the export version of "Pantsir-C1" was the armed forces of the United Arab Emirates. The agreement with the UAE provided for the supply of a large amount of equipment and ammunition for it with a total value of $ 800 million, starting in 2003. However, these deadlines were not met, and the first air defense missile systems were sent to the customer only in 2009. Deliveries continued until 2013.

Russian enterprises sent to the buyer 50 96K6 Pantsir-S1E combat vehicles on a foreign chassis, 1000 9M331 guided missiles, an unknown number of 30-mm artillery shells, and a number of related products for the operation of new equipment. No new purchases were planned, but in the recent past, the UAE has expressed a desire to upgrade the existing facilities.

For many years, a civil war has been going on in Libya between several organizations and groups with foreign support. One of the parties to the conflict is the Libyan National Army (LNA), which is assisted by the UAE. Support is expressed in financing, supplies of materiel, etc. 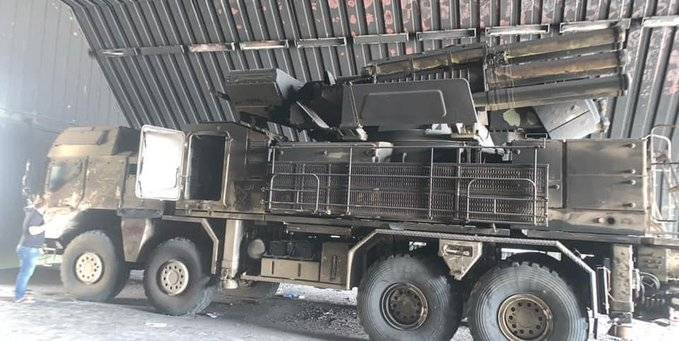 Pantsir-S1E, lost by the LNA along with the Al-Watia base, May 18, 2020
In mid-2019, an export version of the Pantsir-S1E air defense missile system on the MAN chassis was seen on the Libyan battlefields. The vehicle was operated by the LNA and was apparently received from the UAE. Later it became known about new deliveries of similar equipment. According to various estimates, the LNA could receive at least 10-15 anti-aircraft systems from the presence of the Emirates army.

The level of losses indicates relatively large volumes of "Pantsirei" supplies. Thus, the Loct Armor database indicates that from February to May 2020, the LNA lost eight air defense missile systems in different sectors of the front. Seven vehicles were destroyed under various circumstances, and the eighth became the enemy's trophy. At the same time, as far as is known, the LNA still has a certain amount of such equipment.

On May 18, 2020, the troops of the Government of National Accord (GNA) conducted a successful operation to capture the Al-Watia airbase near Tripoli. Retreating, the LNA abandoned various weapons and equipment. One of the trophies of the PNS in this case was the Pantsir-S1E complex, which received some damage. The launcher had a full load of missiles in a damaged condition. Another vehicle of this type was destroyed during the battle and burned out.

According to foreign media reports, the captured ZRPK was soon sent to the city of Zaviya, where it fell into the hands of one of the armed formations associated with international terrorists. Then the Ministry of Internal Affairs of Libya's PNS conducted a special operation and seized the trophy, which was then transported to the Zuvara airfield. 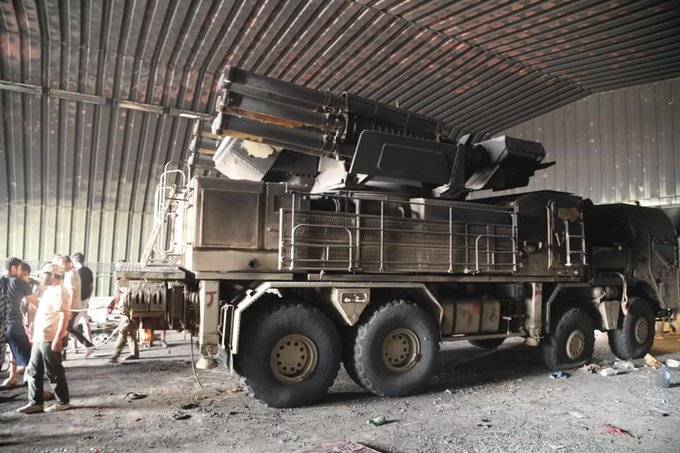 At the end of January 2021, new messages appeared about the fate of the captured ZRPK. The British newspaper The Times wrote that last June the PNS handed over "Pantsir-S1E" to the American military. A C-17 US Air Force transport aircraft with a team of specialists arrived in Zuwara; they prepared the anti-aircraft complex for transportation and took it away. The combat vehicle was delivered to the German Ramstein airbase, where it presumably remains to this day.

Literally the day after The Times, Popular Mechanics raised the topic of the trophy "Carapace". It revealed the possible further fate of this machine. According to him, the ZRPK still remains in Germany, but in the near future it is planned to send it to the United States for a thorough study.

Pantsir-S1E will be transported to Wright-Patterson Air Base (Ohio), where the National Aerospace Reconnaissance Center operates. One of the main tasks of this organization is the study of foreign samples. aviation equipment and anti-aircraft weapons. The Russian air defense missile system in export performance should become the next topic of such research.

Popular Mechanics assumes that the trophy complex will be disassembled and studied at the level of individual units and parts. Then it can be repaired and reassembled for various types of field tests. However, it is not yet clear to what extent these assumptions correspond to reality. In addition, even the approximate dates for sending the air defense missile system to the United States were not named. 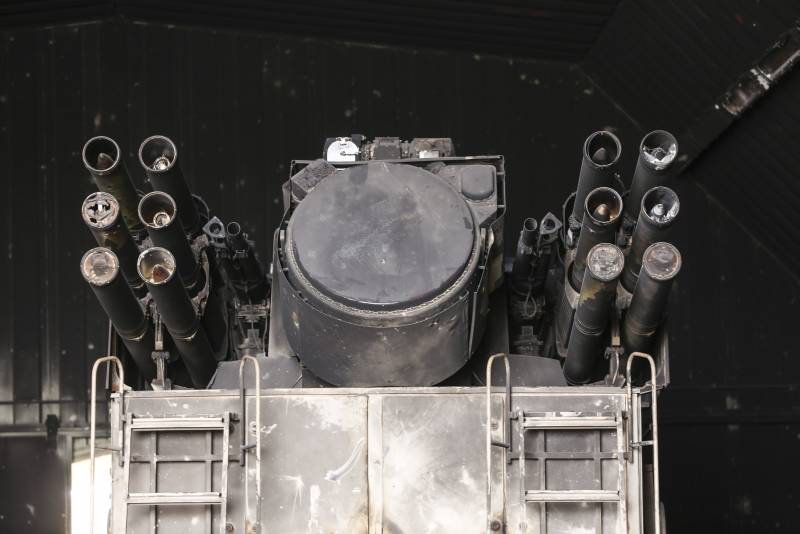 The combat vehicle received noticeable damage
of the latter, News it follows that the United States is not going to return the received "Pantsir-S1E" to the owners in the person of the UAE. Even the long-standing and fruitful military-technical cooperation of the countries will not contribute to such a development of events. Thus, for a country that ordered and paid for fifty air defense missile systems, this machine is actually lost - like others destroyed in battles.

According to the results of the study ...

History with the trophy "Shell" itself is very interesting, but the most interesting events, it seems, will take place only in the future. The United States is going to study the received ZRPK and draw certain conclusions. What the American specialists will learn and how this will affect the further development of aviation and means of attack is a big question.

Probably, American specialists will not learn anything fundamentally new. The United States and the United Arab Emirates have long cooperated in the military sphere, and the Americans had access to the Emirati anti-aircraft systems. They could inspect and study equipment, observe it during firing and communicate with the calculations. However, it is much more convenient to have "your own" complex - now the USA can study it more fully.

Getting Russian-made equipment into the wrong hands could have negative consequences. However, there is nothing to worry about. Before concluding a contract with a foreign customer, the Pantsir-S1E project passed all the necessary checks and examinations. This means that the supply of equipment abroad does not violate state secrets and does not threaten our security.

The exact list of differences between the export ZRPK Pantsir and the vehicle for the Russian army is still unknown. Various sources mentioned the use of radar components with reduced characteristics, the absence of Russian-style state identification means, other computer systems, etc. Thus, the export product differs from the Pantsir-C1 in its lower performance and the lack of some features. 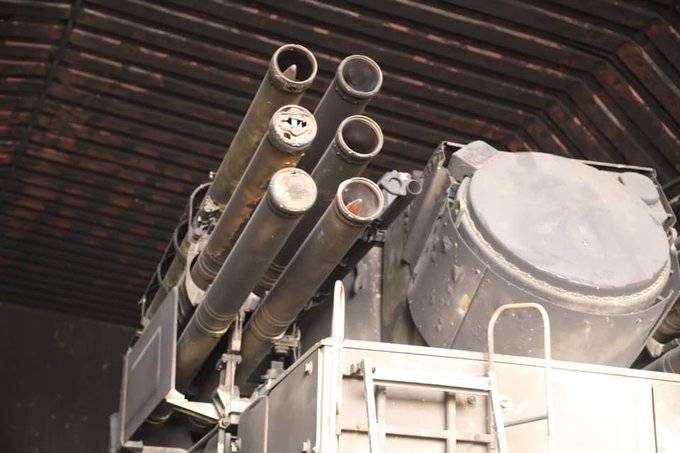 However, even the export air defense missile system is of great interest to American specialists. They get the opportunity to study a real piece of equipment without relying on information from open sources, intelligence or allies. Perhaps some of the features of the Russian complex were not yet known to the American military - and this may affect the further development of some areas.

The current situation around the former Emirati and Libyan Pantsir-S1E is very interesting, and its continuation could have noticeable consequences. At the same time, there are already both winners and losers.

So, the Russian side does not lose anything - the UAE paid for the supplied air defense missile systems long ago, and various kinds of combat losses do not concern us. The loss of classified information does not threaten our country either, because we are talking about a simplified export complex. The United States gets the opportunity to study a modern foreign model, even if not the latest model, and draw conclusions.

For the LNA and the UAE, the loss of the "Shell" is a clear failure. The Libyan national army was left without another element of its air defense, already not too developed, and the UAE lost some money invested in the purchase of equipment. The PNS troops also did not receive any advantages - they were not allowed to strengthen their outdated air defense with a modern model.

It is very likely that the story with the captured "Pantsir-S1E" will be continued in the very near future. The complex is still in Germany, but soon it should go to the USA. How the process of testing and studying will take place, and what results it will lead, perhaps, will become known later.