The Russo-Japanese War as a confirmation of the old rule 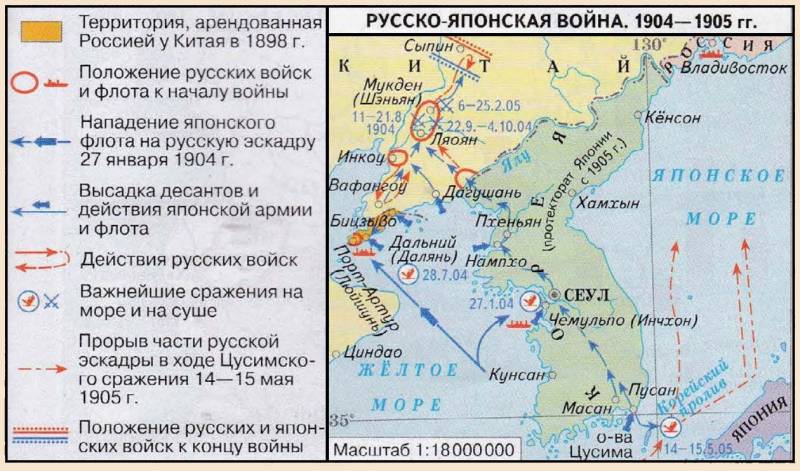 There is an old rule:

"Smart commanders don't think about strategy, but about logistics."
And it was he who was confirmed by the Russo-Japanese War in all its glory. It is precisely the gaps in supply and basing fleet and led to the result that we know.

Disputes about the Russo-Japanese War in general and the catastrophe of the Russian fleet in particular have been going on for more than a century. True, they are moving in the direction of searching for the guilty. Those same legendary switchmen, if you had removed them, everything would have been different. This is not the case.

There were no culprits among the generals and admirals. They were simply given, in principle, an impossible task. And we must start with the plans for war. To understand - they really didn't exist.

On land, Kuropatkin's plan was in effect, the whole point of which was to collect half a million troops and how to hit ... The plan is stupid.

But were there alternatives?

Having neither normal supplies, nor recruits within walking distance (but instead of this - the single-track Transsib in the stage of completion), one can only hope for the numerical superiority, which still needs to be brought up. I will say more - even shoot with caution, because the supply of ammo is not guaranteed.

That, in fact, the brilliant staff officer Kuropatkin understood. So I planned on the basis - while the fleet cuts off the supply to the Japanese, we will gather people and deliver supplies.

All his fault is that he did not consider the position of the fleet. And it was, perhaps, worse than in the army.

There was no fleet in the Pacific Ocean.

There was the Pacific Squadron of the Baltic Fleet, accountable to the governor in the Far East. Formally submitting to Kronstadt, in fact it was a kind of independent force. So independent that in the person of Rear Admiral Vitgeft (who allowed himself to send in a veiled form the head of the General Staff School, Rear Admiral Rozhestvensky), it proudly declared:

"We will draw up the war plan ourselves."
With all this:

1. The only dock for battleships is in Vladivostok. Most of the shipbuilding specialists are in Port Arthur. Between them is the Tsushima Strait, completely controlled by the Japanese.

2. Serious repairs are possible only in the Baltic. Where before the war the detachments of ships and drove. Reinforcements can only be obtained from there. Like shells, and spare parts, and recruits ...

3. For the entire theater of operations, Russia has exactly 2 (two) bases: Port Arthur and Vladivostok. The first is on foreign territory, the second is poorly equipped. Between them is (once again) the Tsushima Strait, which is under someone else's control ...

4. Coal for the furnaces of ships in the Far East was not mined. More precisely, as ... Something was dug there on Sakhalin and Suchan, but of little use. Without logistics. Accordingly - Cardiff, naturally - the delivery of fuel from England by neutral ships with the risk of interception. By the way, no shells were produced in the Far East either, and, in general, nothing was produced. That is, absolutely. The second squadron had to drag the whole train to Vladivostok, including the floating workshop.

5. The fleet is not only ships with guns. This is also transport, and tugs, and other longboats ... All of this was just wildly lacking. Let's say there was exactly 1 (one) icebreaker in freezing Vladivostok. If suddenly, God forbid, we are waiting for spring and freeze-up. Have arrived. It was not for nothing that Skrydlov asked to send Ermak with the Second Squadron. After all, the only "reliable" and serviceable ones did not always pull out.

Summing up all this, one can only be surprised. No, not defeat. And the fact that they held out for so long in the hope of Baltic reinforcements.

By the way, about reinforcements. It was not that much with them either.

It is known that the emperor handed over first 8, and then four more (3 squadron) battleships to the "bolarin Zinovy". The power is tremendous. But the logistics are damn ...

Firstly, only four of them were linear - of the Borodino type. Another - the fruit of the gloomy Russian genius, the battleship-cruiser, which has no analogues in the world, Oslyabya. More precisely, there were two analogs - already in the Pacific Ocean. And they have already shown themselves from the worst side.

This is our eternal fashion for exclusive ...

We are designing a flying submarine under Khrushchev. Under Stalin, sailors want an aircraft carrier battleship. Then under Nicholas we are building something slower than an armored cruiser. And weaker armed and armored (but healthy and handsome, contagion) than an armadillo. And then into battle after a march across three oceans ...

"Sisoy the Great" (they gave the same name) a ship with new artillery, but such a quality the buildingsthat the French, carrying out repairs, almost fainted. They have so hackwork was not accepted. And even smaller. In order to save money.

"Dish with Music"
in the sense of "Navarin" with black powder, old artillery and in quality - close to Sisoy. As well as on the marasmus of economy on displacement.

Well, and the cruiser "Admiral Nakhimov", honestly scratched by the British unsuccessful project. And also outdated.

Nebogatov's squadron is a song. Reinforcements for Rozhestvensky came .... The ancient battering ram "Nicholas I" with artillery not even of the past (like in "Navarin"), but of the generation before last. And three BBOs. What is translated as battleships shore defenses sent by the royal will to ocean hike and fight.

The result - 4 ships of the line, two non-linear ships, two old men, one obsolete misunderstanding and three overgrown gunboats in a linear battle are meaningless.

All this was backed up with light forces - 8 cruisers are enormous power.

True, it is also not without nuances.

Among the eight cruisers, there are actually two for battle. Of these, "Oleg" with problem cars. A "Aurora" with insufficient (for a cruiser) speed. The rest are two ancient armored frigates, two yachts (one with by four three-inch) and two scouts, purely destroyers to drive.

Oh yes. Nine more destroyers. Weaker than Japanese ones. And worn out during the trip.

And this horde was driven across three oceans without entering ports, without repair facilities, without firing on crews. (Who was in the battle - knows. The first time - it's scary. And it turns out differently from the maneuvers).

And why did we fail?

Maybe Nebogatov (champion of Russia in handing over weapons) was cowardly?

Or maybe the sailors did not work well?

No, probably there were few points in the corners. And the nuts (shells) of the wrong model ...

Personally, I blame the admirals for one thing - let's go. And it was necessary to resign and the newspaper scandal. And people would not have died, and the ships were useful, and the fleet would be repaired.

And it turned out that it happened.

There were troughs right up to Gorshkov. Of the fleet did not have.

Ctrl Enter
Noticed oshЫbku Highlight text and press. Ctrl + Enter
We are
About Stalin and KhrushchevWhat you didn't want to know about England
Military Reviewin Yandex News
Military Reviewin Google News
301 comment
Information
Dear reader, to leave comments on the publication, you must sign in.