"Varan" against "Manatee": what will be the Russian aircraft carrier of the new generation 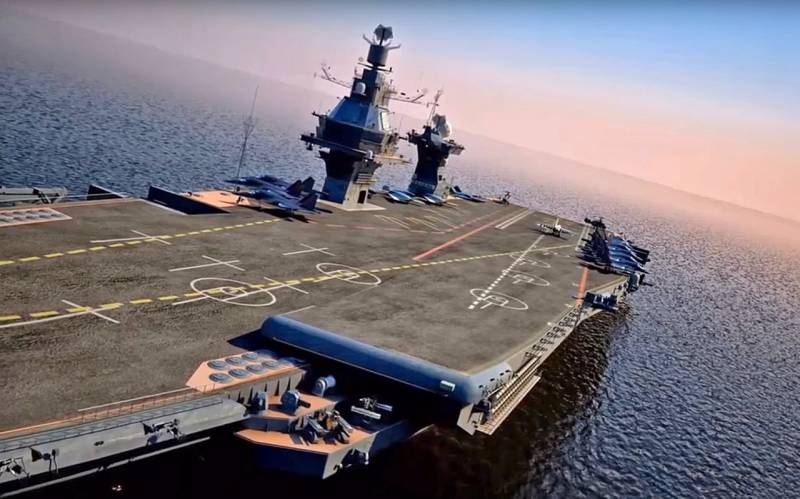 Despite the obvious successes of Russian shipbuilding (in particular, the transfer the fleet last year, the second frigate of project 22350 "Fleet Admiral Kasatonov" and the laying of the first universal landing ships), the main problem is in no hurry to leave the agenda. You can argue as much as you like about the prospects of the hypersonic "Zircon", compare it with Western counterparts, talk about carriers, and so on. However, it is obvious that this complex will not fundamentally change the balance of power. As before, aircraft carriers will remain the "first violin" in tactical terms. Replacing them with frigates or destroyers with missile weapons will be (if) "insofar as".

Even if we assume that the range of a promising hypersonic missile is 1000 kilometers (according to other sources - from 400 to 600 kilometers), this still does not give a decisive advantage over the deck aviation, carrying anti-ship missiles of the AGM-158C LRASM type, with such or even greater range. We also note that the carrier strike group has a flexibility of use that cannot be compared with anything else.

Speaking of the Russian Navy, everything is unchanged here: the country, as before, will rely on "Admiral Kuznetsov"... After the fire that occurred on board in 2019, rumors often appeared about the decommissioning of the ship, but, as far as can be judged, they do not correspond to the truth. The reason the problematic aircraft-carrying heavy cruiser will continue to serve is trivial: there is currently nothing to replace the ship with. The above-mentioned UDC are helicopter carriers and cannot be considered as a substitute for it. In December, a shipbuilding source said that sea trials of the upgraded aircraft carrier Admiral Kuznetsov should begin in 2022. Most likely, this is close to the truth.

Source: mil.ru
Alas, the modernization does not solve key conceptual problems, such as the lack of a launch catapult, a relatively small air group and, therefore, vulnerability to air attacks. It is not surprising that projects of new aircraft carriers are periodically proposed in Russia. The projects are very different. 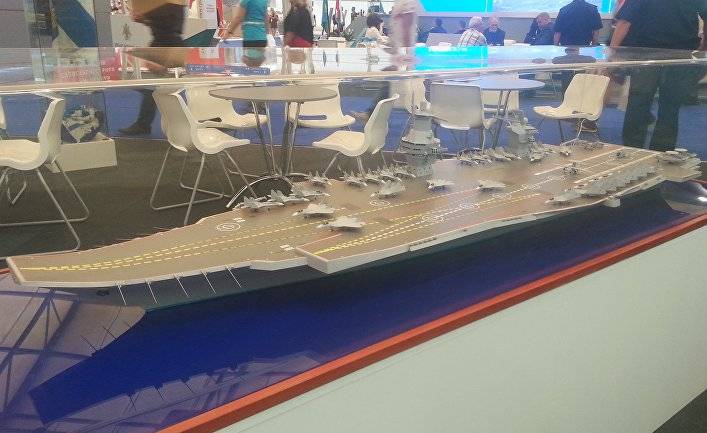 The model of this ship was shown to specialists in closed mode as part of the international naval show in St. Petersburg in 2013. The general public was able to see her at the Army-2015 International Military-Technical Forum.

Judging by the size and potential of the ship, its concept, in general, fits into the concept of a "supercarrier": that is, a conditional analogue of American "Nimitz" and "Gerald R. Ford", which can also carry up to 90 aircraft. On the flight deck of the Russian ship, there are four launch positions: it is supposed to use four electromagnetic catapults. The landing of the aircraft will be provided by one aerofinisher. It is known that they want to equip the Shtorm with RITM-200 nuclear reactors: the same was chosen for the Arctic icebreaker.

In the spring of 2016, it became known about the possibility of building a promising ship at the facilities of the Far Eastern Zvezda plant, but since then information on the promising aircraft carrier has practically not appeared in the public domain. 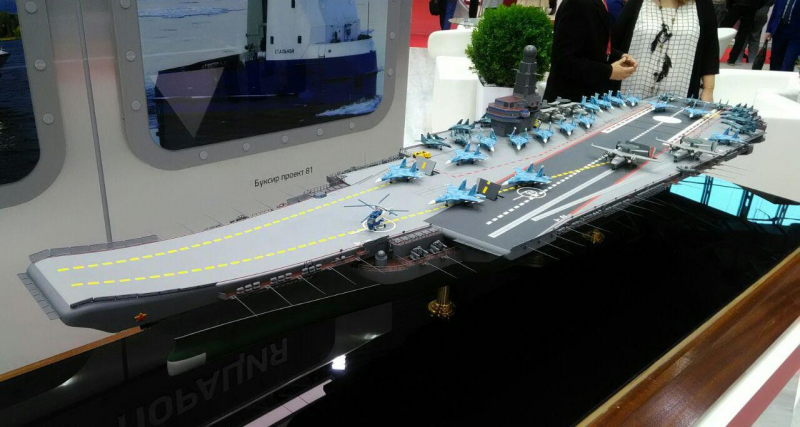 In July, TASS reported that the Nevsky Design Bureau, part of the United Shipbuilding Corporation, presented a project of a new aircraft carrier with the original name "Manatee" at the International Maritime Defense Show in St. Petersburg. According to the plans, the nuclear-powered aircraft carrier should receive a springboard, two electromagnetic catapults and four aerofinishers. Aviation ammunition ranges from 1600 to 2000 tons of ammunition and aircraft weapons.

Attention is drawn to the appearance of the ship. It is difficult to say what exactly this is connected with, but it is easy for a non-professional person to confuse an aircraft carrier with the above-mentioned TAVKR "Admiral Kuznetsov", which can hardly be called successful in the full sense of the word. It is also noteworthy that the developers did not "fantasize" about the deck version of the fifth generation: judging by the layout, the ship will be able to carry deck versions of MiG-29 and Su-27 (Su-33?) Fighters. Of course, such an air group in the XNUMXst century can hardly be called fully modern. Obviously, the issue of creating a fifth-generation carrier-based fighter will be no less "interesting" than the actual development of the new ship itself.

Despite all the differences between the projects "Storm" and "Manatee", there is one aspect that makes them in common: the almost complete lack of information in the media. 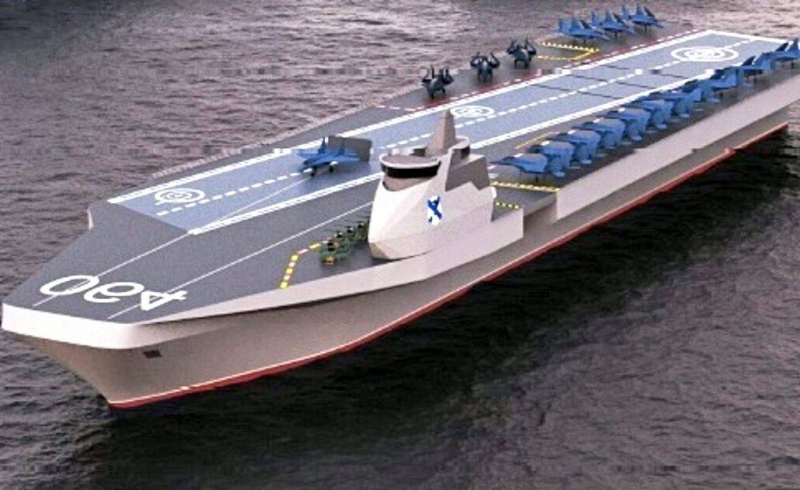 The last known project of a promising Russian aircraft carrier is the Varan universal naval ship (UMK) presented by the Nevsky Design Bureau in the new year. Judging by the image, the carrier-based version of the MiG-29 is seen as the basis of the air group. There are no other reliable data to date.

The aircraft carrier is significantly smaller than the previously presented samples. In general, over time, the size and capabilities of promising Russian aircraft carriers became smaller and smaller. Obviously, this can be viewed as a reflection of the objective economic realities of the Navy and the state as a whole.

It is difficult to say whether this or that project will get a start in life. Today, the likelihood of another "deep" modernization of the TAVKR "Admiral Kuznetsov" in the future is much higher than the construction of any of the aircraft carriers presented.

One of the most important problems is the complexity of international cooperation in this area, aggravated by the sanctions pressure of the West and the difficulty in accessing new technologies. Nevertheless, as mentioned above, the presence (or absence) of full-fledged aircraft carriers dramatically affects the combat capability of the entire Navy. And this means that the topic will not be off the agenda soon: if it ever happens in the future.