Romanians are running in a noisy crowd across Bessarabia 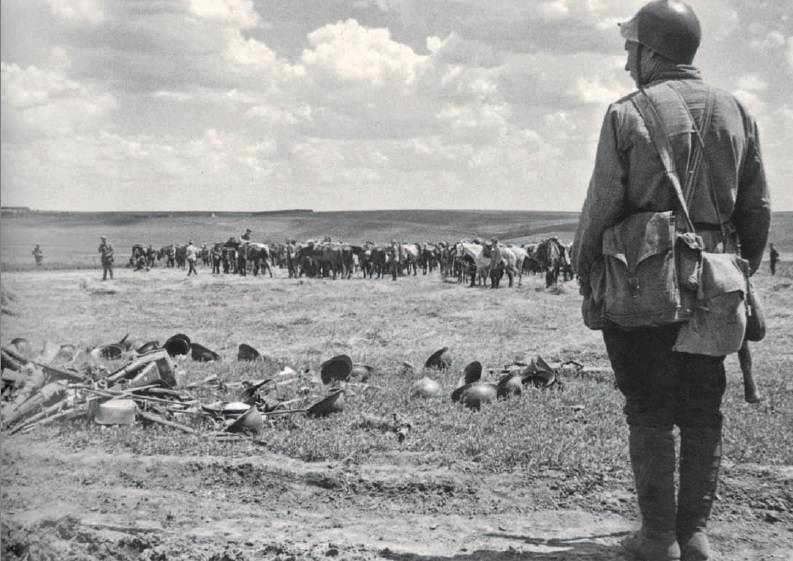 Based on this photograph, it can be concluded that the Romanian soldiers did in fact throw weapon... However, most likely, this photo was taken on July 3, 1940, or later, when the border was closed, and Soviet troops detained and disarmed the Romanian soldiers and officers who did not have time to leave - a total of 7446 people

This история attracted my attention for a long time and was mentioned in my book “Victor Suvorov is lying! Sink the 2013 Icebreaker. There was a large section about Romania and Romanian oil, in which I refuted Viktor Suvorov's thesis that the return of Bessarabia provoked Germany to attack the USSR. First, the return of Bessarabia occurred with the consent of Germany. Secondly, the oil fields were taken under the control of the Romanian troops with the expulsion of the British and French personnel of the firms that owned these fields on July 3, 1940, three days after the Soviet troops on July 1, 1940 established control over Bessarabia.

But we are not talking about oil, but about the weapons, ammunition and military equipment left by the Romanians in Bessarabia, which were then for the most part returned to the Romanians and exported. The literature noted that “abandoned weapons were collected”, from which it could be concluded that the Romanian troops fled in panic from Bessarabia, abandoning rifles, machine guns, guns, cartridges. 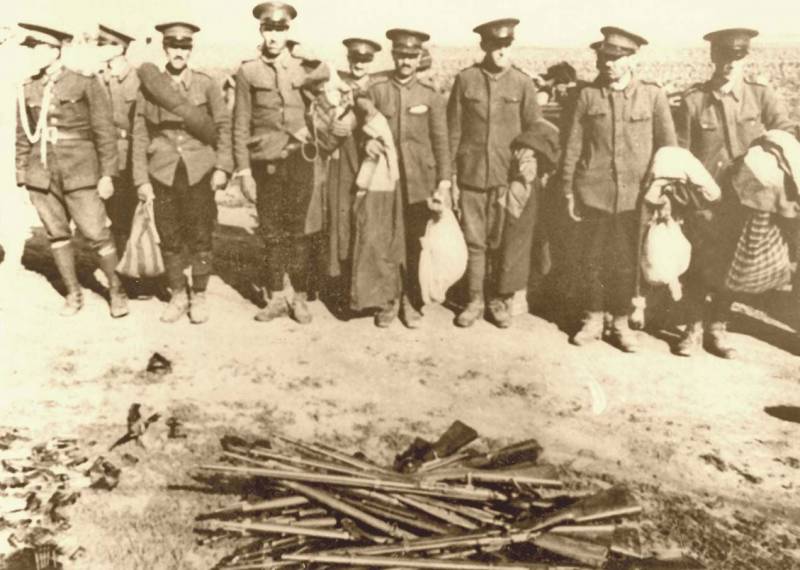 Inspection of Romanian officers when crossing the border
While looking through the inventories of the RGVA funds, I came across documents from the Ministry of War of Romania, among which was the case of the transfer of this very weapons and military property. It is never superfluous to look into the documents - perhaps they will contain some interesting details of this strange and mysterious episode. I will say right away that the documents did not reveal all the secrets, but they gave something interesting, which allows us to look at the exit of the Romanian troops from Bessarabia from a slightly different angle.

They were military warehouses

There were not so many documents, and all of them concerned the transfer of weapons, ammunition and military property left in Bessarabia and Northern Bukovina. They mention divisional general Aurel Aldea, who at the time of the events commanded the 4th Infantry Division and first headed the commission for resolving issues of the evacuation of Romanian troops from Bessarabia and Northern Bukovina, and then headed the commission in Odessa for the return of abandoned Romanian weapons and property (RGVA, f. 492k, op. 1, d. 9, l. 15). Subsequently, he commanded the 2nd and then the 7th Army Corps. General Aldea was an opponent of the war with the USSR and was part of a group of officers who hatched plans to go over to the side of the anti-Hitler coalition, and then played an important role in the coup that overthrew General Ion Antonescu.

The most interesting document from this case is a list of weapons, ammunition and military equipment, which compared the amount left with the amount returned as of 8:13 on November 1940, XNUMX. The document was in a separate black folder, very well designed, on excellent paper, with beautifully executed diagrams. All pages of the document were stamped "Secret". In general, the documents of the Romanian War Ministry were distinguished by the quality of execution, and diagrams and diagrams were generally a work of drawing art. Better than German documents.

Apparently, this document was submitted either to the Minister of War, General Josif Iacobici, or even to Antonescu himself. After the war, the original document ended up in the Russian State Military Academy.

The list shows that what was meant was not what was abandoned by the troops or left in the places of deployment, but what was in the warehouses of weapons, ammunition, quartermaster property, medical, veterinary property, food and fodder. For the export of this property, about 1000 wagons were required, and these warehouses, of course, could not be removed in two days, from June 28 to July 1, 1940, while the evacuation of Romanian troops from Bessarabia and Northern Bukovina continued. Therefore, the Romanians first left these warehouses, and then demanded the return of the property. There were no hostilities, the withdrawal of the Romanian troops took place by decision of the Romanian government, and therefore all this property could not be considered trophies of the Red Army.

The Romanians put forward their demands, apparently based on the inventories of weapons, ammunition and property in the abandoned warehouses, which were available at the General Staff of the Romanian Army. After some negotiations, the Soviet government decided to satisfy the demands of the Romanian side. On October 29, 1940, 3 soldiers, 096 officers and 202 railway workers arrived in Bessarabia and Northern Bukovina to load and dispatch goods. On November 218, 10, 1940 covered wagons and 321 flatcars crossed the border, a total of 471 wagons with military cargo.

It follows from the list that the Romanians did not receive all the property. Part of it, from July to November 1940, one might say, "the moth went away." I will not give the entire long list, but give some positions from it: 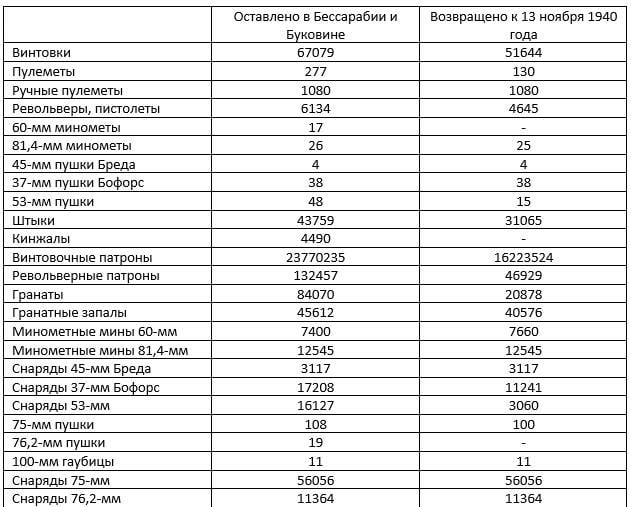 As you can see, some categories were returned in full, for certain categories of low-value property, the Romanians were given more than they demanded. Some of the weapons and ammunition that could have been used by the Red Army were not returned to the Romanians.

They had to part with uniforms and foodstuffs completely or almost completely. Very few uniforms were returned. Out of 79 greatcoats - 227 pieces, out of 1 pairs of boots - only 471 pairs. The directive of the commander of the Southern Front, General of the Army G.K. Zhukov directly stated:

Pay special attention to the appearance of the fighters and their fit, everyone should be shaved, cleaned, in neat clean summer clothes and helmets. The poorly dressed should be left in the rear and not taken to Bukovina and Bessarabia. 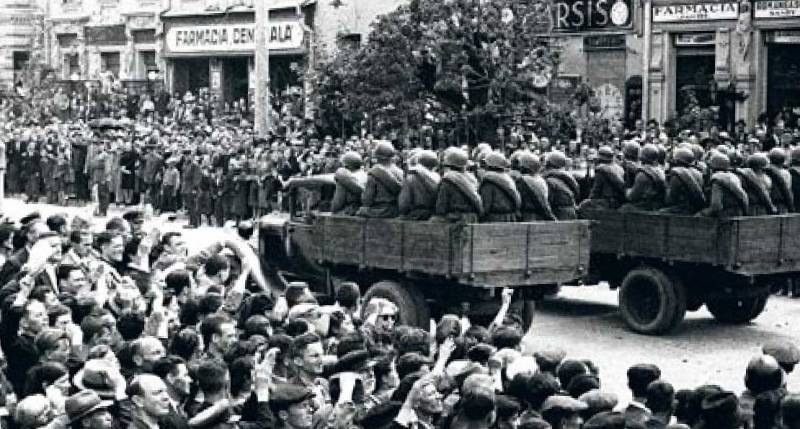 Red Army enters Bessarabia
This directive, as we see, contains a recognition that some of the Red Army soldiers were poorly dressed. It must be assumed that the Romanian uniforms were used to replenish the troops of the Southern Front. If this is the case, then by the number of uniforms not returned to Romanians, we can say that about 10% of the Soviet troops of the Southern Front were dressed and shod in an inappropriate way.

Why were these warehouses created?

An interesting question arises - what were these warehouses? On the one hand, they were clearly created for the war with the USSR. Bessarabia - between the Dniester and the Prut - the territory is small. In the Bendery area, it is about 90 km wide, along the Cahul - Akkerman (Belgorod-Dnestrovsky) line - about 160 km. That is, the depth of Bessarabia is like that of the army's rear. Three railway lines: Novoselitsy - Mogilev-Podolsky, with a branch to Balti and further to the east; Iasi - Chisinau - Bender - Tiraspol and Galati - Bender. Despite the fact that Bessarabia is in a sense an isolated region, and access to it is limited by bridges over the Prut and Dniester, the Romanian army did not have any special problems with supplies. But nevertheless, some theater reserve was created - and obviously for the war with the USSR. 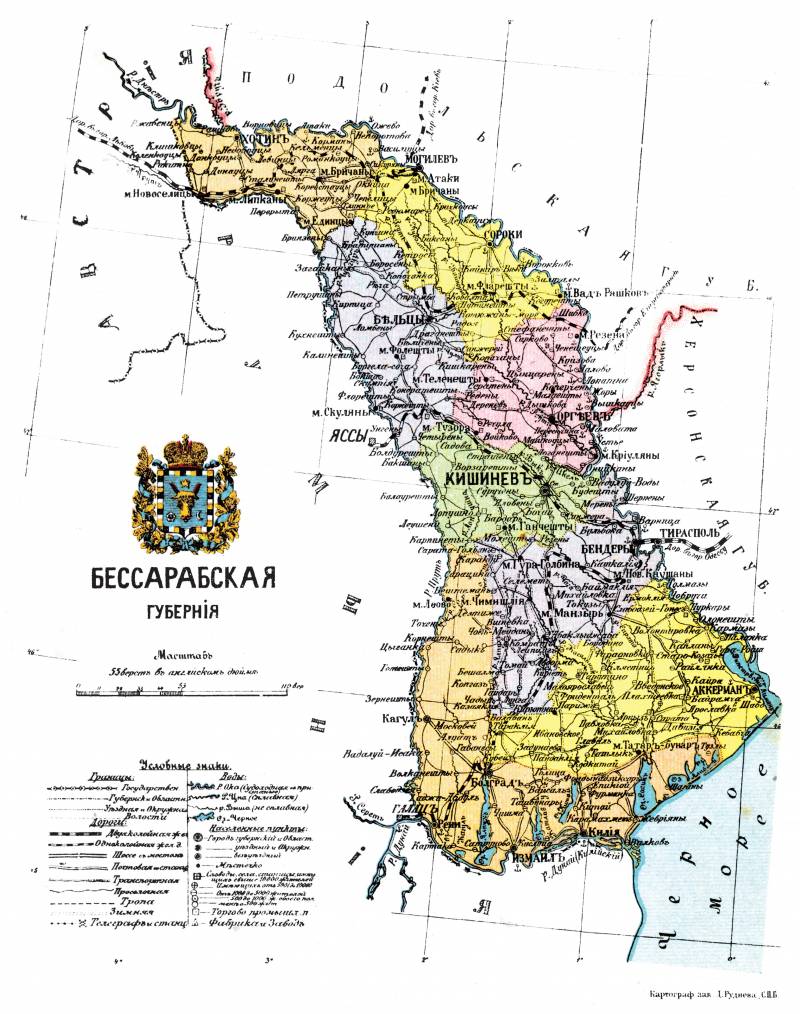 On the other hand, the Romanians deployed a grouping of troops consisting of 20 infantry, 3 cavalry divisions and 2 mountain infantry brigades with a total strength of 450 thousand people. This is about 60% of the strength of the Romanian land army. As you can see, the warehouses were clearly small for the full supply of such a group of forces. If the available stock of cartridges is divided by the ammunition of an infantryman with a rifle - 60 cartridges, then you get 1 bq per 396,1 thousand soldiers. Taking into account the machine-gun ammunition, the stock of ammunition was approximately 0,7 bq for the entire grouping of Romanian troops. You can't really fight with such a margin.

The delivery of bread for the troops was about 360 tons, while the warehouses stored less than a day of delivery of finished bread and wheat in grain for about 7 days. It was hardly possible to expect that the Romanian troops could defeat the opposing grouping of the Southern Front of 638,5 thousand people, superior in artillery and armored vehicles, in just a week.

As for the supply of the entire Romanian grouping in Bessarabia, there is still no documentary data available. As for the warehouses left in Bessarabia, one can draw the following conclusions: either they were warehouses for the first few days of hostilities, in addition to the transported supplies that the troops had with them (and took them during the evacuation), or they were warehouses for replenishment, which should have be recruited locally or transferred from Romania. Judging by how easily the Romanians left them, and then agreed with the non-return of some of the weapons, ammunition and property, their loss was not seen as a critical decrease in the combat capability of the Romanian army.

Why did the Romanians retreat? Because it would hardly be possible to count on victory in a battle with the Southern Front, which had a numerical and especially qualitative superiority, while the defeat of this group would deprive Romania of 60% of the army and make the country very vulnerable both in the face of the USSR and in the face of Hungary , relations with which were hostile. The concessions saved the army. However, having conceded once, I had to concede the second. According to the second Vienna arbitration, on August 30, 1940, Romania ceded Northern Transylvania to Hungary, and on September 7, 1940, South Dobruja was ceded to Bulgaria. These territories were returned to Romania after the end of World War II.