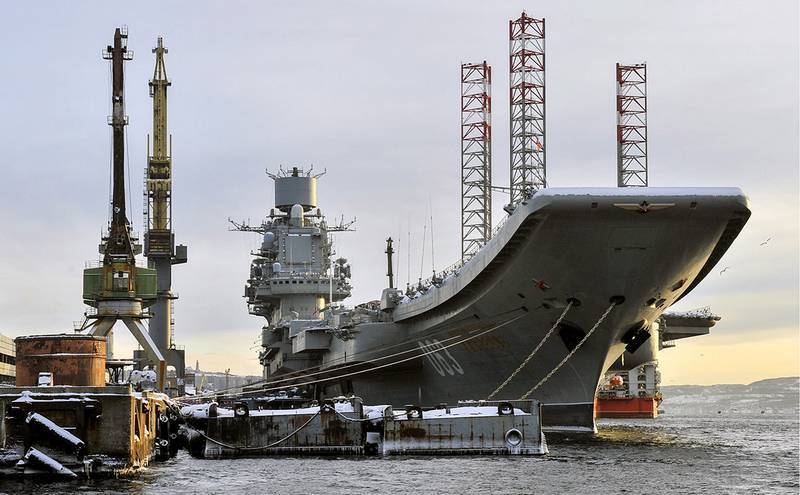 The Zvezdochka shipyard has denied rumors about another fire on board the aircraft-carrying cruiser Admiral Kuznetsov, which is being repaired. This is stated in the message of the press service of the enterprise.


Commenting on reports that appeared in some media about a fire allegedly on board the ship due to an acetylene cylinder that exploded during repair work, Yevgeny Gladyshev, the head of the press service of the Zvezdochka Central Service Center, said that there was no fire.

There was a malfunction in the operation of technological equipment, which did not lead to a fire and did not affect the progress of the ship's repair in any way
- quotes the press service of his words.

According to the published information, the ship is currently at the 35th shipyard, work on board the aircraft carrier is proceeding according to schedule, there are no delays.

Recall that on December 12, 2019, a fire broke out at the Admiral Kuznetsov aircraft carrier undergoing overhaul and modernization, the area of ​​which reached 500 square meters. meters. It took almost a day to extinguish the fire. The preliminary cause is the ingress of a spark from welding into diesel fuel. During the fire, 12 people were injured, two servicemen were killed. In August 2020, the USC named the amount of repairs to the ship, taking into account damage from the fire - from 300 to 350 million rubles.

Recall that work on the repair and modernization of the TAVKR "Admiral Kuznetsov" began in 2017. It was originally planned that the cruiser would be delivered to the customer in 2020, but a series of accidents on the ship led to the fact that the timing of the return of the TAVKR began to shift to the right. The last date for the return of the aircraft carrier to service is 2022.
Ctrl Enter
Noticed oshЫbku Highlight text and press. Ctrl + Enter
We are
Kudrin knows how to "save" the rating of Vladimir PutinMedia: For half a month there was a second emergency with a submarine in the Northern Fleet
Military Reviewin Yandex News
Military Reviewin Google News
49 comments
Information
Dear reader, to leave comments on the publication, you must sign in.