Will the Tu-214R challenge the capabilities of the farsighted E-8C JSTARS? Aces of strategic intelligence in the theater of operations of the XXI century 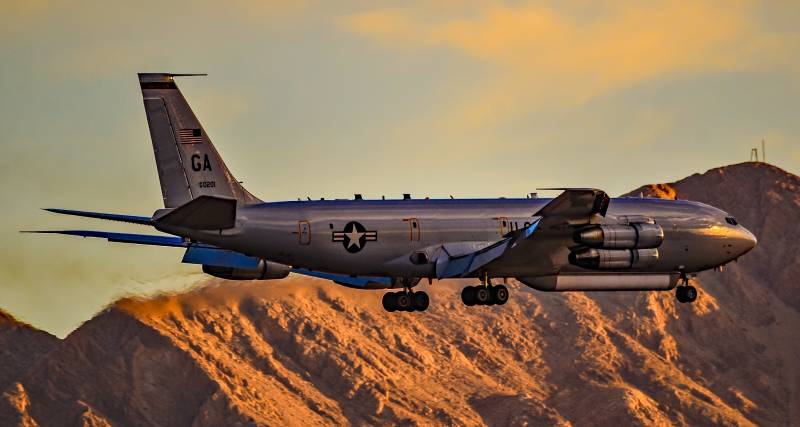 It is no longer a revelation to anyone that over the past two decades, the strategic radar / radio intelligence aircraft E-8C JSTARS (Joint Surveillance Target Attack Radar System) continue to be a key help to the US Armed Forces in maintaining proper situational awareness in active areas of theaters of operations. ).

Due to the presence in the electronic architecture of the E-8C high-energy X-band AFAR side-looking radars AN / APY-3, which have the highest level of noise immunity and the ability to operate in the synthetic aperture mode (SAR) with the formation of a radar image of photographic quality (with a resolution of about 1– 3 m), these machines provide the Air Force, Navy and ILC of the United States with comprehensive information on the location and actions of any surface (surface and ground) objects, including not only radio-emitting, but also any radio-contrast targets that are in radio silence.

Moreover, not only their classification is provided, but also identification achieved due to the hardware and software ability of the APY-3 BO radar to determine the EPR of detected objects, as well as to form their detailed radar "portraits" (with a drawing of the hull layouts and even individual structural elements).

Technical advantages of APY-3 radars, ensuring JSTARS maintain the status of "key tools" of strategic radar intelligence of the US Air Force

And even despite the fact that the tasks of strategic radar reconnaissance and target designation in the US Air Force are currently entirely assigned to the aircraft fleet of dozens of RQ-4B Block 40 high-altitude reconnaissance UAVs, the outfit of 20 manned E-8C JSTARS will continue to retain its status The "strategic asset" of the air reconnaissance of the 461st Air Wing of the US Air Force, having gone through several stages of modernizing the element base of the avionics and updating the AN / APY-3 radar software, as well as the integrated information and control systems JSTARS, automatically endowing the E-8C with the function of air command posts.

So, just a few days earlier it became known about the conclusion between the US Air Force and the military-industrial giant "Northrop Grumman" 325 millionth contract for the prolongation of technical support and service of these machines.

The decision of the US Air Force command to extend the operational life of the E-8C Joint STARS aircraft against the background of the active use of the Global Hawks is far from unreasonable.

In particular, in contrast to the AN / ZPY-2 MP-RTIP side-looking airborne radar systems installed on the RQ-4B Global Hawk UAV and having a survey performance of the earth's surface of about 15 thousand square meters. km / min in the moving target / GMTI mode (with an effective bearing range and target identification of about 170-200 km), the AN / APY-3 integrated AFAR radars of E-8C aircraft are capable of scanning a surface sector with an area of ​​about 50 thousand . sq. km at a distance of about 220-250 km.

Three times higher survey performance of AN / APY-3 radars (compared to AN / ZPY-2) is achieved not only due to the higher energy potential and range of APY-3 (represented by AFAR from 2600 PPM), but also due to the impressive elevation field of view, reaching 120 degrees against 45 degrees for the AN / ZPY-2.

Consequently, in the active area of ​​the theater of operations (against the background of a large-scale high-intensity conflict), replete with the widest range of armored and artillery weapons of a potential enemy, the JSTARS strategic radar aircraft equipped with AN / APY-3 radar is able to provide the US Armed Forces with a much higher level of situational awareness than UAVs " Global Hawk "with a less advanced airborne radar AN / ZPY-2.

At the same time, all the advantages of the E-8C can be demonstrated much more clearly in a difficult meteorological situation, when the SYERS-B / C turret multispectral optoelectronic systems placed on the Global Hawks will lose efficiency due to a multiple decrease in the meteorological visibility range, which means that will be able to even partially compensate for the lower parameters of the AN / ZPY-2 radar.

In the Russian Aerospace Forces, the tasks of strategic radar and optical-electronic reconnaissance / target designation with the proper level of efficiency can be performed exclusively by Tu-214R aircraft.

The Tu-214R strategic radar and optoelectronic reconnaissance aircraft developed by specialists of JSC Tupolev for the first time in stories modern intelligence aviation boasts a unique multi-band MRK-411 radar capable of operating in the subsurface radar mode (using ultra-low frequency bands of the order of 120-400 MHz and pulse duration of 50-200 ns) and providing detection and identification of subsurface radio-contrast objects (enemy bunker infrastructure, mine launchers etc.), which are under the multi-meter size of soils of various types.

This radar system, represented by two AFAR canvases (placed under radio-transparent side beams in the nose of the fuselage), is able to provide the Russian Aerospace Forces, the Navy and the Russian Army with comprehensive information about any actions of a potential enemy, significantly surpassing the MP-RTIP radars of the RQ-4B Global Hawk drones "And more" far-sighted "radars AN / APY-3 of E-8C aircraft (and this is not to mention the presence in the avionics of aircraft of this family of multispectral long-focus OLS" Fraction ", operating in the IR / TV / low-level TV ranges ).

In the same turn, one of the questions still remains open ...

We are talking about an extremely meager fleet of strategic reconnaissance data, which today is represented by only two Tu-214Rs with registration numbers RA-64511 and RA-64514.

To our great regret, this number of Tu-214Rs is enough to obtain proper situational awareness in only one of the three key strategic directions in the European conventional theater of operations.

Ctrl Enter
Noticed oshЫbku Highlight text and press. Ctrl + Enter
We are
Unknown details of the exercises of the B-52H flight 25 km from the northern borders of Crimea. Has the USAF achieved the desired result?Situational analysis of the death of the MH17 flight (Malaysian Boeing 777), made on the basis of engineering analysis from 15.08.2014
Military Reviewin Yandex News
Military Reviewin Google News
28 comments
Information
Dear reader, to leave comments on the publication, you must sign in.