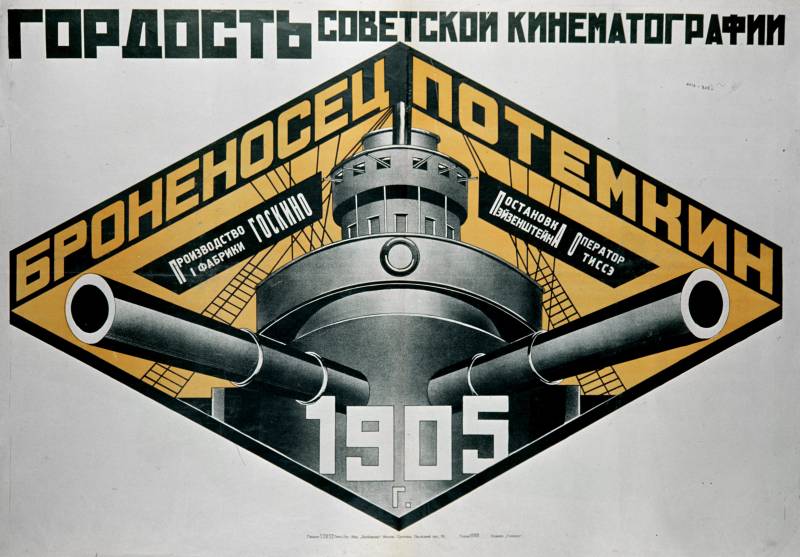 "Battleship Potemkin" - historical a feature film shot at the first film factory "Goskino" in 1925. The work of director Sergei Eisenstein has repeatedly and over the years been recognized as the best or one of the best films of all times and peoples based on polls of critics, filmmakers and the public.


However, Potemkin is far from the historical truth. In fact, it is a masterpiece of propaganda.

The newest battleship, which was commissioned in May 1905, terrified coastal cities for 11 days. Petersburg and all of Europe followed his chaotic throws.

"God grant that this difficult and shameful story ends sooner."

As a result, the "Prince Potemkin-Tavrichesky", whose mutiny was not supported by the rest of the Black Sea Fleet, surrendered to the Romanians in Constanta.

The team went ashore. The battleship was returned to Russia. And they renamed it "Panteleimon".

Already in November 1905, the ship's crew tried to support the uprising of the cruiser "Ochakov". However, the battleship was disarmed. And he did not take an active part in the mutiny.

The Potemkin's mutiny was carefully studied.

Most researchers noted that the uprising was caused by a number of objective and subjective reasons.

The Russian Empire was in crisis, spurred on by an unsuccessful war with Japan. The revolution began. Strikes, executions of demonstrations, clashes with the police and the army, pogroms, revolutionary terror, the death of the fleet at Tsushima formed a nervous, difficult situation in the Black Sea Fleet.

The team was recruited from a pine forest. And it didn't work out.

A chain of absurd accidents fell upon this. Meat with worms, tarpaulin taken out on the ship's deck at the wrong time, weakness and indecision of the officers, etc.

The common cause of the mutiny on the ship is the rotten meat served at the crew's lunch.

Indeed, the battleship commander, Captain 1st Rank Yevgeny Golikov, sent the ship's inspector, midshipman Makarov, to Odessa to purchase provisions. The situation in the city was vague. There was a general strike, many shops were closed, others were experiencing supply problems.

As a result, Makarov came to the store of his friend, the merchant Kopylov. He had meat, but already rotten. The sailors took him. On the way back, a destroyer sent for sailors with provisions collided with a fishing boat and delayed for several hours.

As a result, the meat became frankly rotten and the officers who took the food noted that the meat smelled stale. There were refrigerators on the ship, but they did not work, since the Potemkin was launched in a hurry. In principle, for the practice of that time, this was not a special incident. The meat would be processed in salt water and used.

The ship's doctor Smirnov, when they lifted packages of pasta with the inscription Vermichelli on board, joked that the crew would feast on worms (in Italian, "vermicelli" means both narrow pasta and worms). The sailors did not understand the joke. And they took the doctor's words at face value.

At 11 o'clock the signal for lunch was played on the ship. They put my brother with vodka on the deck. A dinner cup was poured for each sailor, they drank it right there. The captain and senior officer did not take a sample of the borscht cooked for the team. Doctor Smirnov found him fit, also without a test. However, the sailors refused to eat it. And demonstratively gnawed crackers, washed down with water.

This was reported to Golikov. He commanded the general assembly. I ordered the doctor to re-examine the dish. Smirnov again recognized the borscht as good without tasting it. And he said that the team "got fat".

Golikov threatened the sailors with punishment for the riot. And he ordered those who want to eat borscht to go to the 12-inch tower. For the rest he called a guard. Most of the team went to the tower. Several dozen people doubted.

Senior Officer Captain 2nd Rank Ippolit Gilyarovsky ordered to detain those who remained and to record the violators of discipline. He also instructed to bring a tarp from a 16-oared launch. This was taken as preparation for execution.

The excitement intensified. Some researchers noted that the courage of the crowd was given by a glass of vodka drunk on an empty stomach. The sailors rushed into the battery room, capturing weapon and cartridges. An open rebellion began. Gilyarovsky tried to suppress him, but was killed. Both the captain and several officers were killed. Others were arrested.

The destroyer that followed the battleship was captured under threat of fire.

It should be noted that after the successful uprising, the sailors calmly ate borscht. Nobody got poisoned.

Having captured the Potemkin, the sailors did not know what to do.

The battleship went to Odessa, which caused pogroms in the port. The authorities blocked the port and prevented the riots from spreading further. Odessa, then Sevastopol and Nikolaev, were declared martial law. The forces of the Black Sea Fleet were sent to Odessa.

In order not to fall into a trap, the battleship went out to sea. Before that, he fired at the city.

On the morning of June 17 (June 30), Potemkin met with a squadron of Admirals Krieger and Vishnevetsky. The "Silent Fight" took place.

The team was ready for battle and death. But the guns of the ships of the squadron were silent. The rebel battleship passed through the squadron twice. He was greeted with shouts of "hurray" and the battleship "George" joined him. The battleship Sinop almost joined the uprising.

The rest of the ships, where the sailors sympathized with the rebels, were taken by the frightened command to Sevastopol. 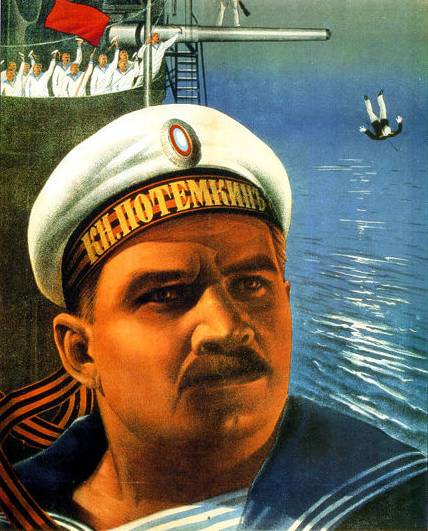 The situation is difficult. The tsarist authorities feared that other ships would also support the uprising. In Sevastopol, a conspiracy on the battleship "Catherine II" was uncovered. The instigators were arrested, the ship was disarmed.

On June 19, the uprising took place on the training ship Prut. There was a threat that the uprising would engulf the coastal cities. The naval command was paralyzed. And I couldn't really do anything.

The West closely followed the situation. The press wrote about the complete disintegration of the Russian Empire. Britain was ready to send ships into the Black Sea to restore order. In Constantinople, they feared that the rebellious battleship would appear in Turkish waters and cause an uprising already in the Turkish fleet. The Turks began hastily to strengthen the mine and artillery defense of the Bosphorus Strait.

"Potemkin" and "Georgy" arrived in Odessa, seized a transport with coal. On "Georgia" the control was intercepted by the officers and the part of the team that did not support the riot.

"Potemkin" left Odessa. Dangled along the coast. And under the threat of shelling, he demanded provisions and coal in the ports. The insurgents were given food, but not coal.

On June 25 (July 8), the ship arrived for the second time in the Romanian Constanta and surrendered. The team was stationed in Romania.

For "Potemkin" came the ships of the Black Sea Fleet. He was taken to Sevastopol. Sprinkled with holy water and renamed to banish

The sailors of the rebellious battleship who returned to Russia were caught until 1917.

In total, 173 people were convicted, only one was executed - Matyushenko. That is, tsarist Russia, unlike Western countries, had a very humane court. Most of the Potemkin residents remained in Romania, some left for the world. Most of the fugitives returned to Russia after the revolution.

In 1910, the battleship underwent a major overhaul. During the First World War he took part in battles against the Germans and Turks.

After the Revolution of 1917 and the intervention, it was captured by the Germans, then by the Anglo-French occupiers.

In 1919 it was put out of action by the British. Was in the White Fleet, then returned under the control of the Red Army. In view of his deplorable state, he did not return to duty.

And was commissioned on metal.

The film "Potemkin", which was released in 1925, did not correspond to historical reality. But, as a film campaign, it is a great work.

First, the Bolsheviks had nothing to do with organizing the rebellion. The Sevastopol Revolutionary Organization (Sevastopol Central) was an organization of Social Democrats, not just Bolsheviks. This organization did not expect an uprising on the Potemkin, the ship's crew was considered "backward" in a revolutionary sense.

The leaders of the rioters were non-commissioned officer Grigory Vakulenchuk and sailor Afanasy Matyushenko. Vakulenchuk belonged to the revolutionaries, but whether he was a member of the RSDLP is a question. Matyushenko is more of an informal leader, a criminal rather than a political one. Representatives of the “bottom” were grouped around him.

Later in exile, he called himself an anarchist. I met with Lenin in Switzerland, but it all ended in a scandal and a fight. Similar types killed officers in the Black Sea Fleet and the Baltic after the February Revolution of 1917.

Vakulenchuk's supporters initially planned to wait for a general uprising. But Matyushenko's line took up - an immediate revolt and support for the unrest in Odessa. It is possible that Matyushenko had connections in the "Odessa party", which was behind the unrest in the city. Vakulenchuk died during the riot. And the rebellion was led by Matyushenko.

Eisenstein completely invented the most powerful psychological scenes in the film: the shooting of the instigators of the mutiny, covered with a tarp like a shroud.

In fact, the tarp was commonly used for dining on the upper deck during hot weather (so as not to accidentally spill over the deck).

There were no indiscriminate shootings in the Russian fleet. And the sentenced were not draped with anything.

Another beautiful, powerful and cruel, but fantasy (fake) is the execution on the Potemkin Stairs.

And the red flag on the rebellious battleship is not a symbol of the Bolsheviks, but according to the international code of signals - readiness for battle.

Therefore, this film was too far from the historical truth.

But as an example of agitation, it is, of course, a purely author's masterpiece of world cinema. 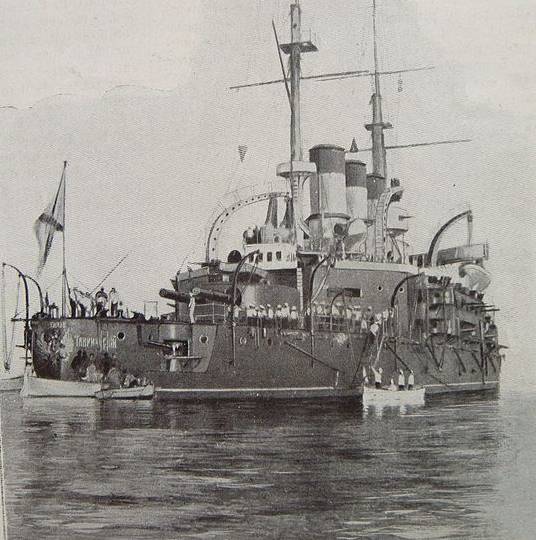 Battleship Potemkin. Disembarkation of the team at the port of Constanta.