Not awarded with an award. In memory of border guard Pavel Kapinos 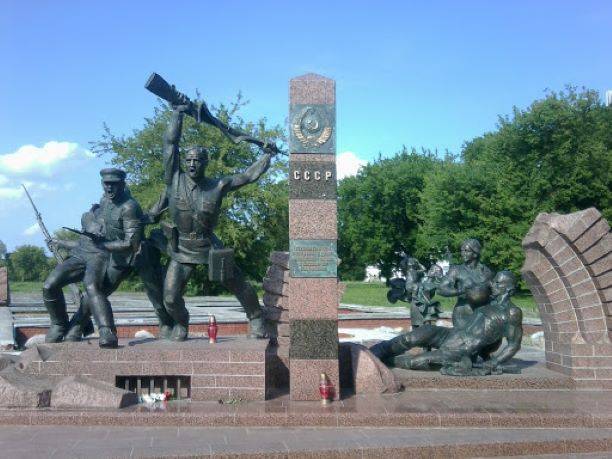 Russians don't give up

Border guard Pavel Kapinos was a brave and courageous guy. Served superbly, as expected. He guarded the border with due vigilance. He was an excellent tracker and a well-aimed sniper. Had many promotions from the outpost command. 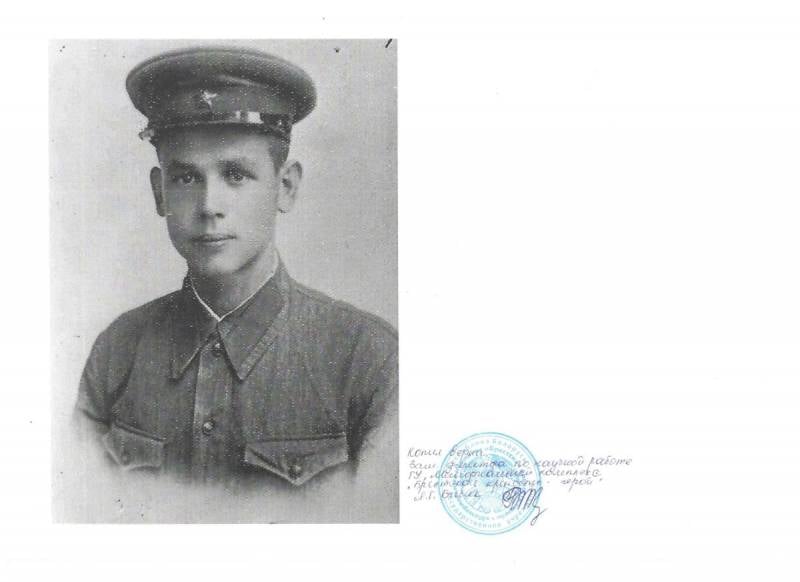 When German troops invaded our land without declaring war at dawn on June 22, 1941, he - corporal, shooter of the 2nd outpost of the 1st commandant's office of the 17th Red Banner Brest frontier detachment of the NKVD troops, together with other defenders of the border, met the intruders with fire. He died just ten hours later.

No, the life of Pavel Kapinos was not cut short by an enemy bullet. He knew how to disguise himself well and fought to the last bullet. But they ran out of ammunition. And the brave fighter preferred death to captivity. For himself, he left this last patron.

But it is only according to church canons that suicides are considered sinners and do not even have funeral services. Moreover, what is he - Pavel Kapinos, a suicide. He simply did not understand what it was like to surrender to the enemy.

In the 60s of the last century, the Moscow publishing house "Young Guard" published the book "First volleys" by the Kazakh writer-border guard Sergei Martyanov. The publishers have embodied a truthful documentary study of the first hours of the war at the 2nd outpost into a brochure.

Pocket size. Paperback. She quickly disappeared from circulation. This is usually the case with books of this kind. You will hardly be able to find her now. Don't even try. If only in large libraries. 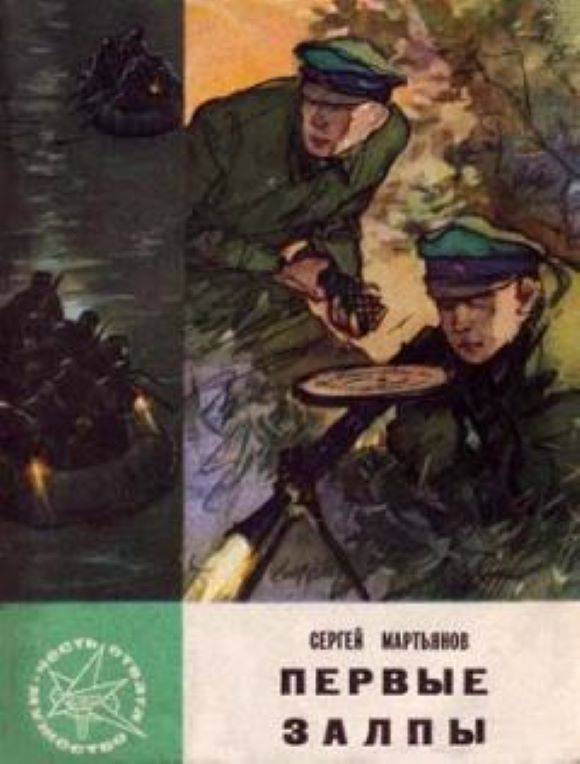 But now it is easier to do it on the Internet: the book in the public domain is fully laid out already on many sites. In my opinion, this is correct. Because we all should know exactly this historywritten by researchers who were not indifferent to those events.

Where can you find out the truth

The work of a talented prose writer from Yaroslavl, Sergei Martyanov, has always stood out for the better by the fact that the author, who had served for many years in the border troops, always took a document as a basis in his works.

He delved into the archives for a long time, looking for, at first glance, inconspicuous moments in the history of the border troops, which he then embodied in stories, stories, film scripts. So the writer came to the feat of Pavel Kapinos. 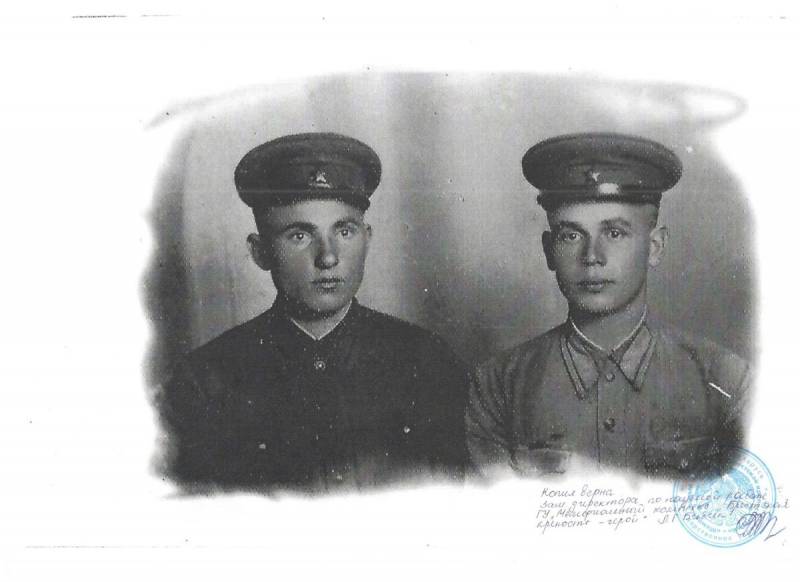 Yes, he was not the only one at the 2nd outpost to meet the enemy as befits a border warrior. Nearby were the same fearless colleagues. And smart, experienced commanders. Martyanov was looking for one of them - the head of the outpost, junior lieutenant Vasily Nikolaevich Gorbunov, for a long time. And yet I found it.

The veteran went through the entire war and lived in the 60s in the same Yaroslavl, where the writer himself was from. Together they went to Belarus, to the Brest region, to visit the battlefield after a little over twenty years. And there, among the charred ruins of his native outpost in the village of Novosyolki, Vasily Nikolaevich Gorbunov clearly remembered how it all happened ...

On June 21, in the evening, political commander Leonty Gorbachev and corporal Pavel Kapinos walked along the bank of the Western Bug and checked the border posts. They walked openly, not disguising themselves, and at some point noticed two bathers near the opposite bank.

Suddenly one of those splashing in the water swam to our shore. Not reaching forty meters, he shouted that on the 22nd at four in the morning Hitler would strike at the Soviet Union. And quickly swam back.

Unless help arrives in time

All the further time will be taken by endless checks of what he heard. Yes, the Nazis are concentrating untold forces on the other side of the Bug: a metallic clang, endless movement of cars at night, abrupt sounds of commands, flashes of searchlights.

And in the morning, on the opposite Polish side, there is always a quiet and level field with endless heaps of hay. What's under them? But maybe this is still a provocation, about which the border guards have been warned every now and then?

Nevertheless, Gorbunov prepared for any surprises: he sent reinforced detachments to the directions of the likely advance of the enemy, two hours before the start of the war he raised the personnel of the outpost on command:

"Outpost! In the gun! "
At dawn, the chief of the outpost urgently transferred most of the soldiers and members of the officer's families to an equipped blockhouse. It was still quiet, and the border guards, finding three saboteurs dressed in Red Army uniforms, destroyed them. But then it began ...

The dense shelling of the outpost did not inflict damage on the personnel of the border guards, only destroyed many of the buildings. Everyone was still alive. A fight ensued. Rifle shots, automatic and machine-gun bursts were heard everywhere.

The Nazis, crossing the water surface of the Bug on pontoons, did not particularly disguise themselves. But bumping into a dense fire, they were forced to lie down and crawl, like snakes, from one hillock to another. This was clearly not what they expected.

Corporals Pavel Kapinos and Ivan Buzin, as part of the squad, held the defense on the northwestern outskirts of Novosyolok. The border guards have rifles. Pavel, of course, has a telescopic sight. Easel machine gun, cartridges, equipped machine-gun belts and grenades.

It seems that everything is there, but there is not much. Unless help arrives in time ...

The museum fund of the State Institution “Memorial Complex“ Brest Fortress-Hero ”contains four ordinary pages filled with the fine handwriting of the border guard officer Gorbunov. They are dedicated to the feat of Pavel Kapinos, a black-haired, black-browed, tall boy from the Stavropol village of Preobrazhenskoye, who is called upon to guard the western border. 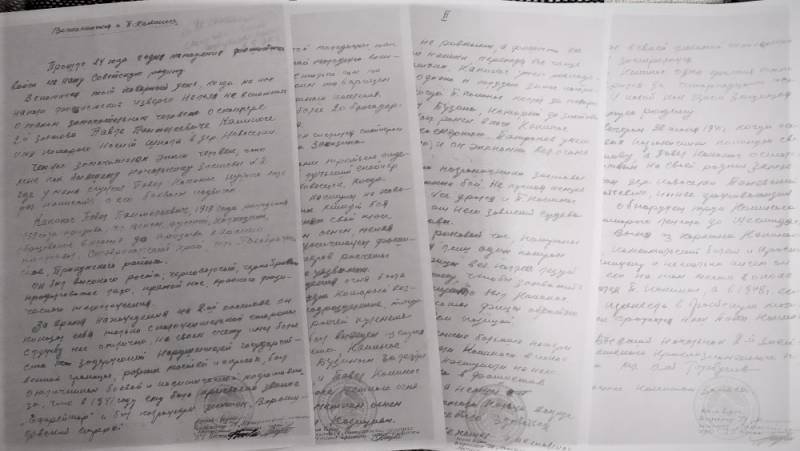 From the first minutes of the battle, the sniper Kapinos unmistakably selected the officers' figures among the advancing Fritzes through the telescopic sight and mercilessly destroyed them. One fell, the other. And immediately among the attackers - confusion, confusion.

Pavel changed position and silenced the enemy machine gun. A sniper bullet stuck in the eye socket of the Nazi. Kapinos crawled a little to the side, a shot - and the loader falls like a sack near the enemy mortar.

But the numerical superiority of the advancing machine gunners is evident. They are conducting a dense fire, you cannot raise your head. And fighters of the border are dying, dying. "Maxim" fell silent. And Pavel, putting his rifle aside, takes the control handle and presses the trigger.

Buzin helps him, directs the machine-gun belt. The ammunition runs out quickly, and Paul sends a friend for a new batch. The battle continues, but Buzin is still not there. The ring of attackers shrinks around Paul.

Yes, where are you, Ivan, why did it take so long?

But Buzin, mowed down by a burst of automatic weapons, dies in the roadside grass. He never made it to the outpost. The last machine-gun belt has been shot. The grenades are used up.

Pavel takes up the rifle again. There was only one cartridge left. Shot… 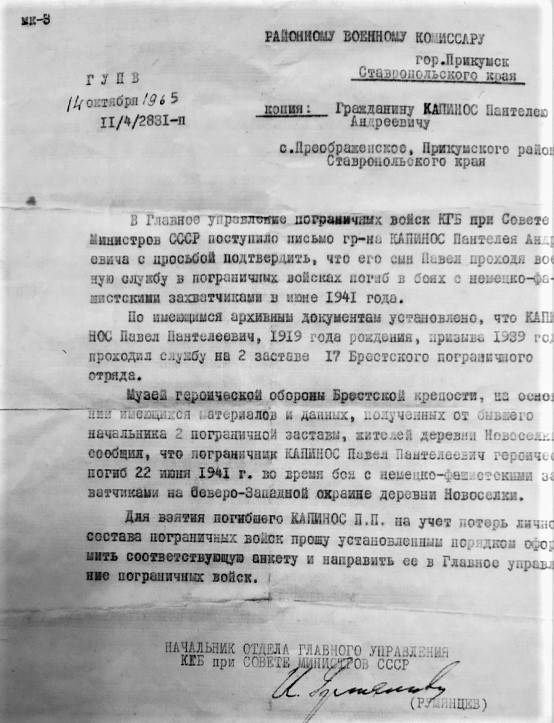 Late in the evening, when the skirmish died down, and the enemy orderlies began to collect the dead Fritzes, a local resident Alexei Panevsky, watching from hiding, counted the killed Nazis who were being carried. There were more than fifty of them.

Cars with corpses disappeared behind the outskirts of the village. And only then did Alexei go up to Pavel. He took Kapinos's documents and letters from his tunic pockets, and then buried him in a small trench, the last safe hideout of a brave border guard.

Panevsky did the same with the other killed soldiers. A few years later, in 1948, their remains will be reburied in a mass grave.

The museum archive of the Memorial Complex contains another document signed by Junior Lieutenant Vasily Gorbunov. This is a list of the dead border guards of the 2nd outpost. Together with those who came to them for help from the commandant's office, during ten hours of defense, 52 defenders of the border were killed in that battle. 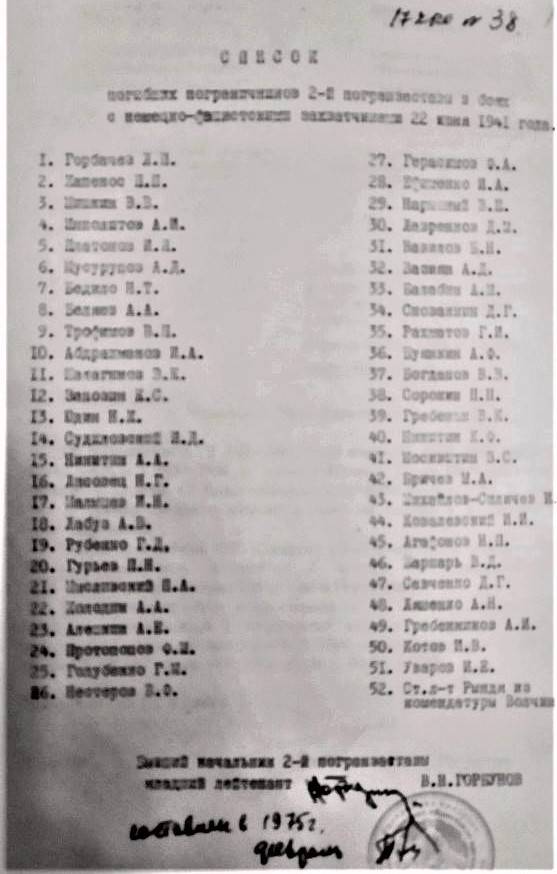 Only a few survived. Together with the head of the outpost and members of the officers' families, they were able to leave. For many of them, the fate of the war was pretty bad. Someone survived. And Gorbunov himself ended the war in Berlin as a captain.

Two decades after the war, thanks to the books of Sergei Martyanov, his fellow countrymen in the Stavropol region learned about the feat of Pavel Kapinos. So in the villages of Preobrazhenskoe (Stavropol Territory) and Novosyolki (in Belarus), streets appeared, indicated on the map by his name.

Since 2006, Pavel Kapinos has been listed among others at the monument-stele in the city park in Budennovsk. And on June 22, 2017, a memorial plaque was unveiled in the native village of the border guard, perpetuating his memory. 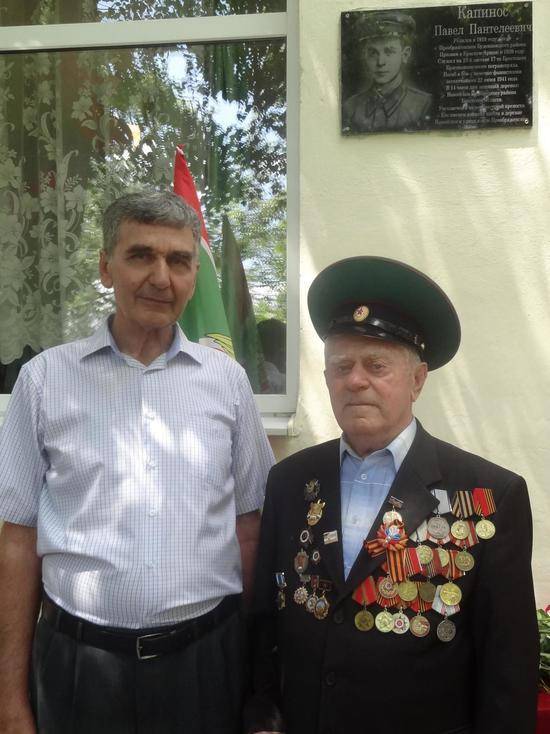 The brother of the hero Nikolai Panteleevich Kapinos and the front-line border guard Ivan Obryaschenko.

Not allowed. So put it on!

And this is the question that involuntarily arises. The feat of the border guard is obvious. And there is even documentary evidence of this, written on behalf of the former head of the outpost Vasily Gorbunov.

But how is it that his heroic deed was not marked with an award?

Not then? Not later? Not now? When the year of the 75th anniversary of Victory is over.

The history of the Great Patriotic War knows examples when a soldier who alone destroyed 50 officers and soldiers with an ax and grenades was awarded the title of Hero of the Soviet Union.

And for corporal Pavel Kapinos, I feel humanly offended.

It's a shame that this heroic boy was never noted by the Motherland.

And representatives of the Stavropol Territory Regional Branch of the Russian Council of Veterans of the Border Guard Service continue to refuse all their applications for rewarding Pavel Kapinos by the higher authorities every time.

"Not allowed",
They usually say.

"Before you had to think."

"There is no primary view."
What rewards were you thinking about then? When the Motherland is in danger ?!

Bureaucratic barriers are difficult to overcome.

Well, how can you prove the obvious to those who have settled in armchair trenches?

Unless, as in the famous song of Vladimir Vysotsky:

“And the rifle for you?

And send you into battle? " 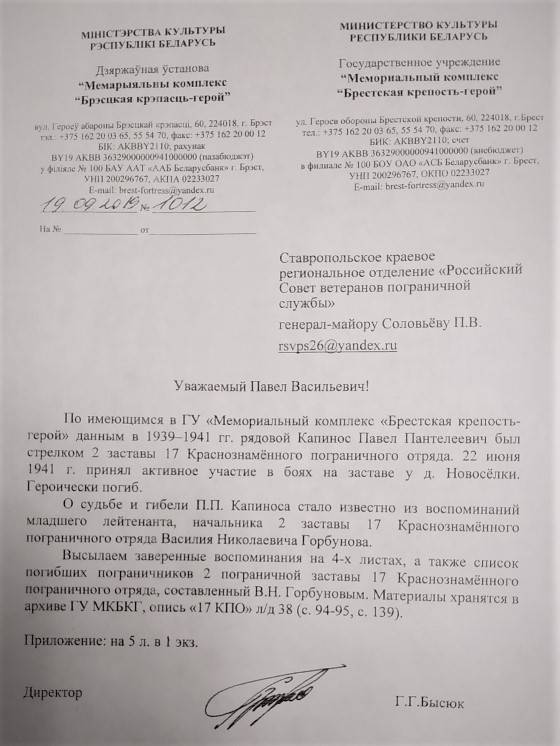 Then such a clerk is unlikely to be on the front line? And, most likely, he will break into the run.

That's the whole story on this.

Ctrl Enter
Noticed oshЫbku Highlight text and press. Ctrl + Enter
We are
The most productive snipersDamansky, Dulaty, Zhalanashkol - unknown pages of the history of the Soviet-Chinese conflict
Military Reviewin Yandex News
Military Reviewin Google News
31 comment
Information
Dear reader, to leave comments on the publication, you must sign in.