Press of Ukraine: The war in Donbass forced the United States to immediately create a short-range air defense system IM-SHORAD 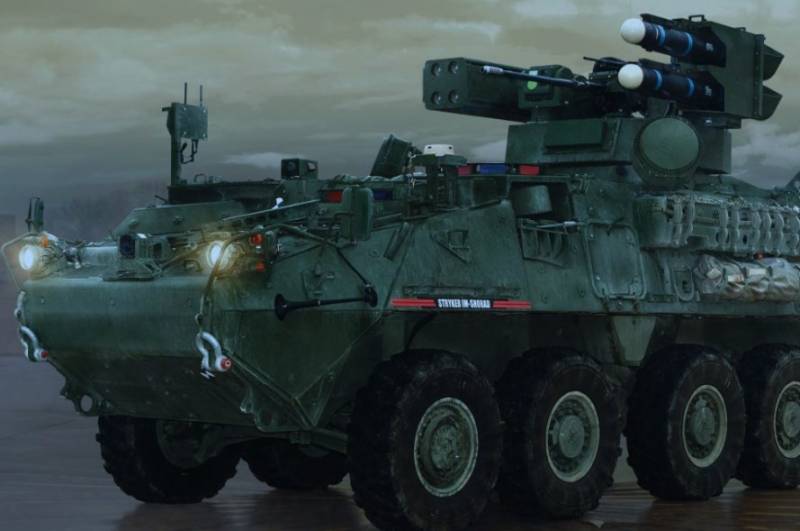 The American company Leonardo DRS has announced the first deliveries of equipment kits (MEP) for the new IM-SHORAD (Initial Maneuver Short-Range Air Defense) anti-aircraft missile systems. The main requirement of the military to the manufacturer was as follows: the new machine should be able to independently identify and destroy air targets, especially UAVs, as well as helicopters, airplanes and cruise missiles.

Leonardo DRS has announced that it will supply the US Army with the first kits for 28 short-range self-propelled air defense systems IM-SHORAD manufactured by General Dynamics Land System for their final integration into new Stryker armored personnel carriers. These will be the first deliveries under a five-year contract worth more than $ 600 million signed with the US military on December 2 last year. The total amount of contracts for this project is $ 1,2 billion. Its performers are General Dynamics Land Systems, Leonardo DRS and Raytheon.

The centerpiece of the MEP kit is the unique integrated tower armory platforms. Its uniqueness, among other things, lies in the "stuffed" means of destruction of both air and ground targets. These are the 7,62-mm M240 machine gun, the 30-mm XM914 cannon, Hellfire missiles for destroying ground and air targets, and Stinger anti-aircraft missiles.


Oddly enough, the creation of this technique is associated with the events in Ukraine. At least that's what Ukraine itself thinks. The war in the Donbass forced the United States to immediately create the IM-SHORAD short-range air defense system. In particular, the idea of ​​creating a new complex was prompted by the US Army's report from the 2015 Congressional Research Service, which described the successful use of drones by both sides of the conflict in southeastern Ukraine.

The threat was re-voiced in 2018, when Iraqi forces tried to recapture the city of Mosul from radicals, but were attacked by small drones dropping grenades for a long time. Although the US Air Force planes dominated the sky, they were powerless against quadcopters flying at an altitude of 60-100 meters.