The earliest firearms: wheeled and multi-barreled ... 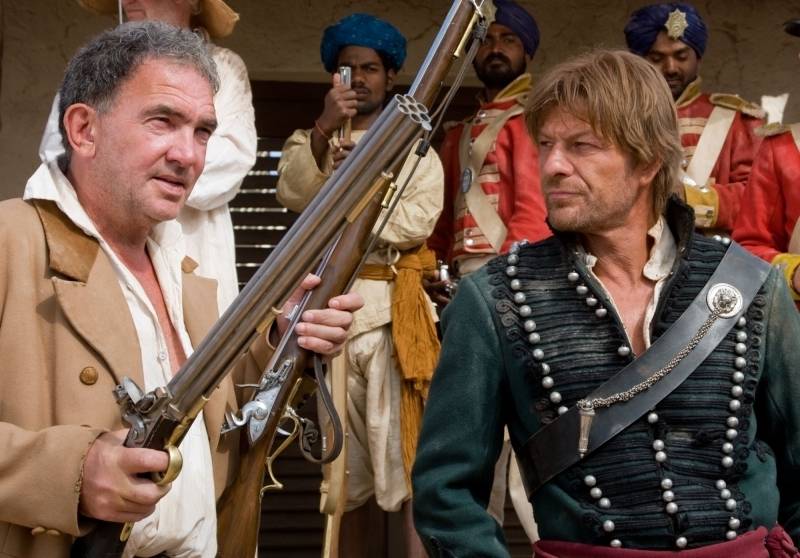 A multiple rocket launcher (pictured left) designed by James Wilson in 1779. Henry Knock produced these guns for the British fleet... All seven barrels had a common fuse and fired in a volley. When fired, bullets flew to the sides several times, so one shot into the crowd could hit several people at once. However, it was possible to load only one central barrel and shoot like a single-shot rifle. A scene from one of the films about the adventures of the King Sharp

We got into a fight on Silver Street ...
We would fight now
Why, unfortunately, one of us grabbed the revolver.
"Badges" Rudyard Kipling
History firearms weapons. Last time we stopped at the fact that the wick lock became the main mechanism for igniting the powder charge in the barrel, and this mechanism in the same Japan, as well as in Tibet, existed for a very long time. Until 1868! Well, hunters - they could even use matches! Remember N.A. Nekrasov:

Kuzya broke the trigger at the gun,
Matchesk carries a box with him,
Sits behind a bush - lure a grouse,
Attach a match to the seed - and it will break out!
However, human thought did not stand still, and very soon a wheel lock was invented to ignite the powder charge. Where and by whom? Impossible to say. A diagram of the device of such a lock was discovered in the book by Leonardo da Vinci "Codex Atlanticus" 1505. And this is essentially his only invention, which became widespread during his lifetime. But there is also a manuscript by Martin Löfelholz dating from the same year, which also shows a very similar incendiary device. So which of them was the very first is hard to say. Again, there is nothing surprising in the fact that we do not know for sure the author of this invention.

An ordinary lighter - that's what it is!

The fact is that, since matches did not exist at that time, people constantly had to deal with a variety of devices for making fire. Here you have a chair, and a tinder (a piece of linen cloth burnt on a fire), and, most likely, the banal wheel lighter that appeared already then (only without a can of gas, of course), in which the toothed wheel was twisted with a finger, and the pyrite pressed against it, or the flint gave a sheaf of sparks that fell on the tinder and ignited it. And it didn't take a lot of mind to come up with the idea of ​​putting the same thing on a musket or arquebus and connecting it to the trigger. True, it was necessary to do something - not with a finger, of course - to turn the wheel itself. But this was already a purely technical solution: a wheel with teeth was connected to a spring through a short chain and a stopper was attached to it - and so the wheel lock was born! 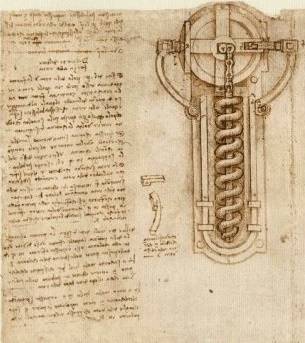 Diagram of Leonardo da Vinci's wheel castle from the Codex Atlanticus 1505 Library of Ambrosian, Milan
First of all, the new lock surpassed wick locks in reliability. He was not so sensitive to moisture and could be cocked for a long time. If it used hard flint, then the notch on the wheel quickly wore out. Soft pyrite did not spoil it like that, but it crumbled itself, and its particles contaminated the lock mechanism. In addition, it had a lot of details (at least 25!), And therefore it was very expensive. So, in 1580, an arquebus with a wick lock could be bought for 350 francs, but the same arquebus, but with a wheel lock, cost no less than 1500 francs. In addition, a key was required to wind up its mechanism - if the shooter lost it, then his weapon also became useless. But the fact that such a weapon could be carried covertly and just as suddenly and unexpectedly caused a completely predictable reaction of rejection (so great was the fear of this novelty!), So in 1506 wheel locks were banned in Geislingen, and in Hamburg and In a number of other German cities, carrying pistols with such a lock without the permission of the magistrate was punished by cutting off the hand.

The inner structure of the wheel lock. Drawing from the book "Small Arms" by Christopher Hunt. P. 9
By the way, it was thanks to the wheel lock that the pistols appeared. The wick-lock pistol was very inconvenient, although it was used in Japan. But the new castle immediately raised military affairs in Europe to a completely new level. Now it was possible to arm the cavalry with such a weapon, and ... riders-pistoliers - reitars and cuirassiers - who replaced the former knightly cavalry, immediately entered the battlefields. 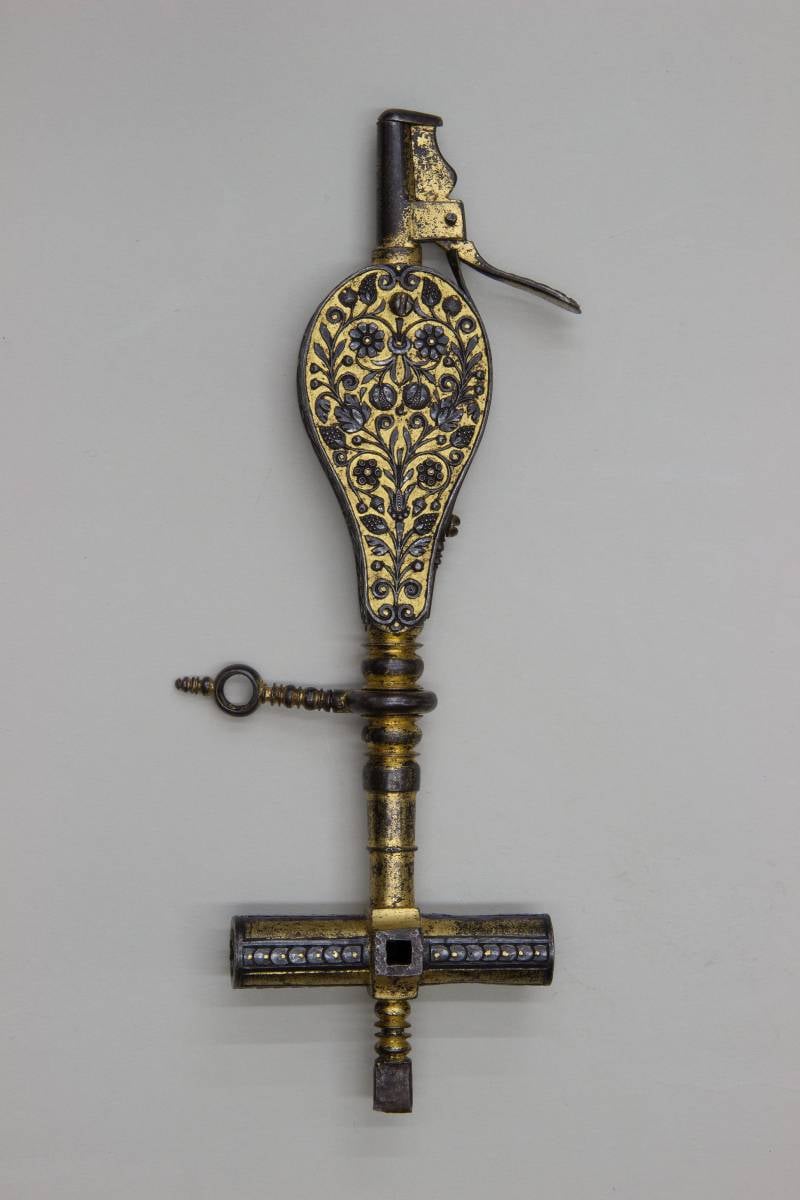 This was the key that should be used to wind the spring of the wheel lock. Lost the key - left unarmed! Moreover, this key itself is not simple, but is combined with a powder flask-natrus for seed powder. Metropolitan Museum of Art, New York
Accordingly, this led to the last most serious thickening and weighting of the rider's armor, which now counted on protection from a bullet fired from a wheeled pistol almost point-blank! However, there was a whole series of articles about what the cavalry of the New Time was like, so we will not develop this topic here, but we will continue to get acquainted with the changes that the wheel castle made to military affairs.

Without a key - nowhere!

But the Japanese samurai riders used match pistols and did not complain. One can only imagine how much attention the jump demanded from them with a lit fuse in their hands or already in the weapon, so that it would not burn out from the headwind, so that it would not fall out of the serpentine, and the horse, too, could not be ignored. And then you still had to shoot at the enemy and then jump back. He simply could not have a second pistol ready to fire, while a European rider could have quite a lot of wheeled pistols!

Baijutsu is a Japanese match pistol. Edo period, 1615-1868 Anne and Gabrielle Barbier-Muller Museum, Dallas
And, by the way, again, we note that these changes mainly affected the cavalry, but the infantry still continued to use the match lock. It was simple and cheap, and then the military took the quantity, leaving the quality to the cavalry! 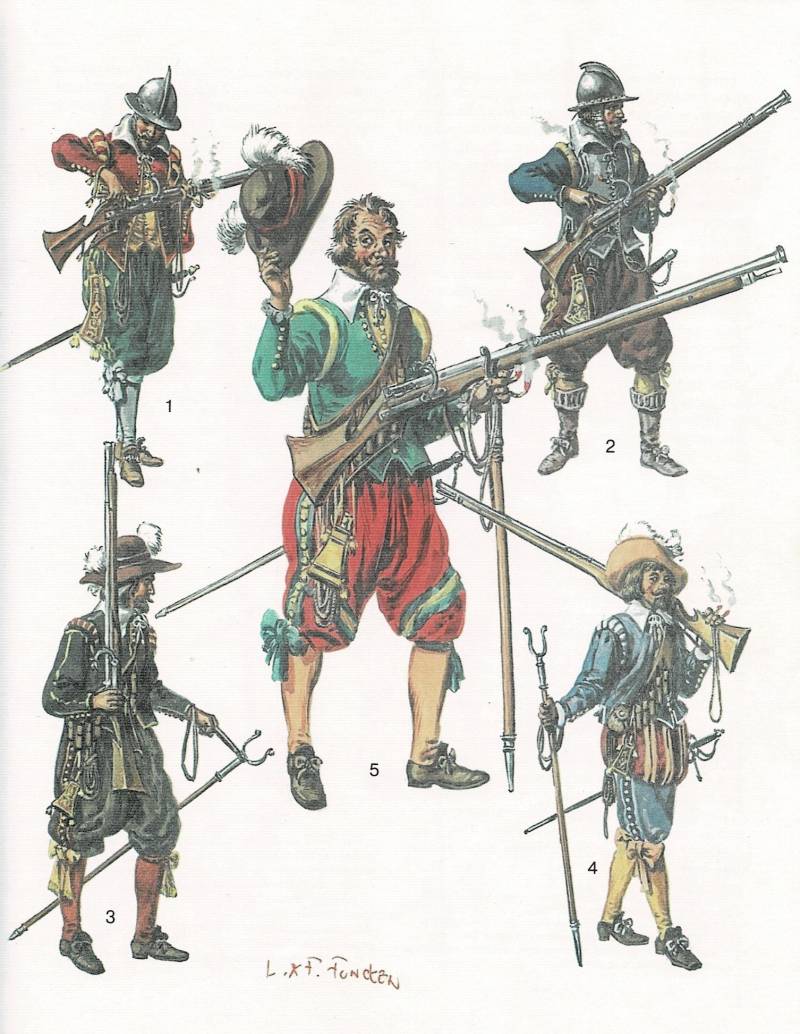 European arquebusiers and musketeers of the 2002th century with match weapons in their hands. It is easy to distinguish the former from the latter: arquebusiers wore helmets and did not have stands for shooting. Illustration from the book by Liliana and Fred Funkenov “Encyclopedia of weapons and military clothing. Middle Ages. Renaissance: Infantry. Cavalry. Artillery "M .: Astrel, 50, S. XNUMX
The wheel lock began to be widely used in hunting weapons - since at that time only the nobility was hunting with firearms, and she could afford the most modern weapons at that time, as well as in weapons for target shooting - here God himself ordered the use of this lock, because it really made it possible to turn gun shooting into real entertainment.

Weapons for hunting and shooting fun

Wheeled hunting musket, approx. 1640-1650 Master Kaspar Spaat. Material: steel, gold, pear wood, antler, bone. Dimensions: total length 106,4 cm; barrel length 77,6 cm; caliber .46 (11,7 mm); weight 3350 g. Metropolitan Museum of Art, New York
The Dukes of Bavaria were keen collectors who collected exotic objects and works of art in a special gallery called the Kunstkamera. In the capital of Munich, they opened various workshops, where the most skilled artists and craftsmen produced objects of art for the princely collection or for gifts to foreign dignitaries. Among the artists employed by the Munich court were steel carvers Emanuel Sadeler (active 1594-1610), his brother Daniel (recorded 1602-1632) and Kaspar Speth (circa 1611-1691). Unlike other artists, they did not try to achieve a decorative effect using a large amount of gold, but used it mainly as a background to emphasize the blued steel ornament, carved in high relief. They usually took plots and patterns of decor from drawings by Flemish and French artists of the second half of the 1597th century, made in the style of mannerism. Craftsmen of wood, ivory and horn carving and engraving, such as Jerome Borstorfer (1637-1633) and Elias Becker (1674-XNUMX), have been called upon to create ornate armory boxes of the highest quality to match magnificent barrels and weapons. The locks were made by Sadeler and Spaat.

But the most interesting thing is that, although the first "multi-barreled" weapons appeared in the era of absolute domination of the matchlock, it was the wheel lock that made it possible to create effective multi-barreled - usually double-barreled types of such weapons. However, the match weapon was also improved. True, mostly hunting - here the masters could not limit themselves to anything. They did not limit, so that even the wicked muskets-revolvers they created have come down to us!

Hunting revolver musket, eight-round, with a match lock. Germany. 1600-1610 Steel, wood, bone, copper alloy; forging, carving, engraving, inlay. Total length: 139,0 cm; barrel length: 94,4 cm; caliber: 18,3 mm. Inv. No. 3.0.-6305. Photo of the State Hermitage Museum, St. Petersburg
But double-barreled pistols with wheel locks began to be used by cuirassiers and reitars. And no wonder! After all, the pistols of that time were large and heavy. Two pistols were placed in saddle holsters, since they had a length of half a meter, two more could be tucked into the tops of boots, and two more were somehow tucked into a belt or placed on a special harness. That is, six barrels to the maximum, and each weighing at least one and a half kilograms, or even more. And also a cuirass, legguards, a helmet, a sword, a powder flask, natruska, a bag with bullets ... But all these problems were solved by the presence of just a double-barreled pistol: two of these pistols were already four shots, and four - eight, while their total weight increased slightly.

Two trunks are better than one! 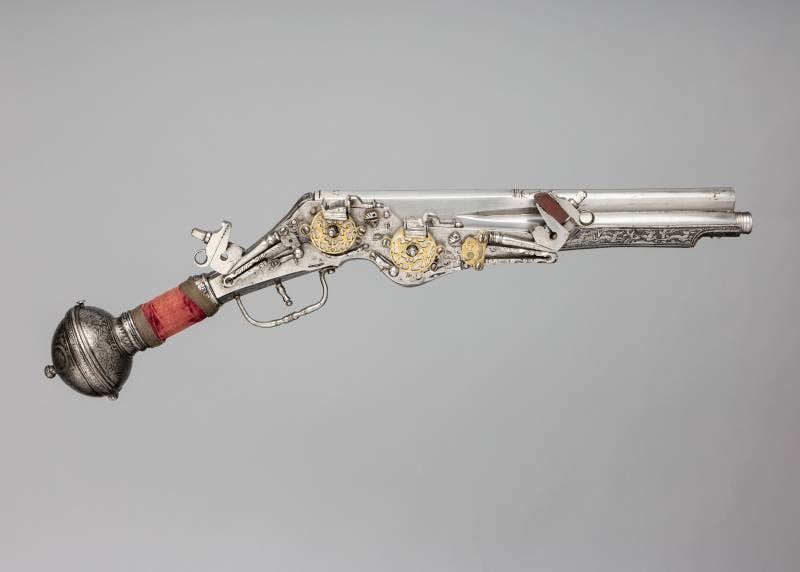 Double-barreled wheeled pistol from Augsburg, approx. 1580 Material: iron, brass, velvet. Dimensions: total length 54 cm; the length of the upper trunk is 31,6 cm; lower barrel length 27,3 cm; upper barrel caliber 12,1 mm; lower barrel caliber 12,7 mm; weight 2401,2 g. Metropolitan Museum of Art, New York
It is interesting that the "ball" ("apple") at the end of the pistol grip did not serve at all in order to hit the opponent on the head in hand-to-hand combat, although this also happened. Usually it was hollow, unscrewed and served as a container for spare flints or pyrites. 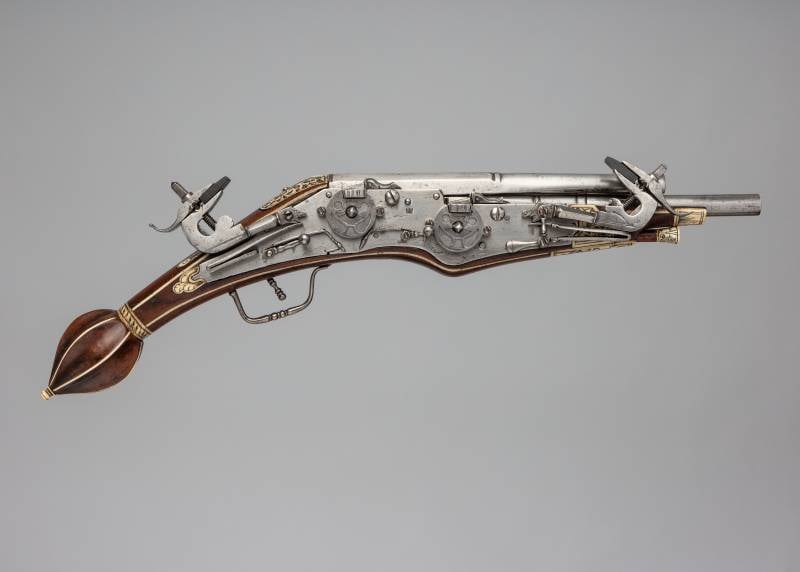 Another double-barreled pistol with a wheel lock, 1612. Also from Germany. Material: steel, wood, antler. Dimensions: length 51,75 cm; upper trunk length 24,1 cm; lower barrel length 23,8 cm; upper barrel caliber 10,8 mm; lower barrel caliber 13,6 mm); weight 1800,2 g. Metropolitan Museum of Art, New York
The "secret door" (a small case on the right side with a sliding lid) was a fashionable fixture on the butts of wheeled muskets. It was customary to store bullets there, ready for use, that is, wrapped in an oiled cloth or just paper. 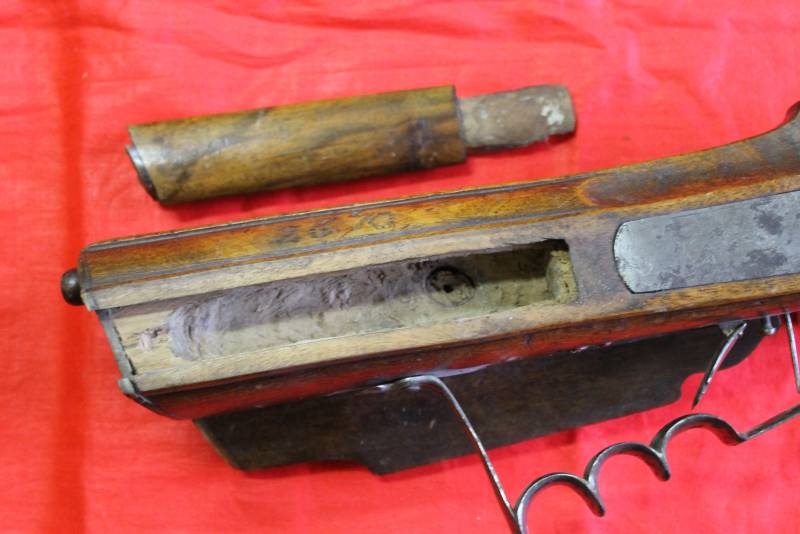 A pencil case on the butt of a wheeled gun. Penza Regional Museum of Local Lore 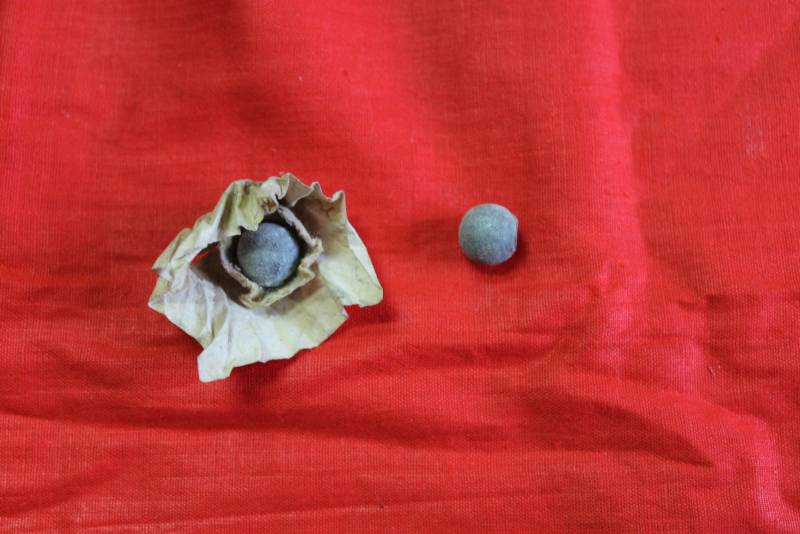 One of three bullets, wrapped in a paper wad. Found in this pencil case. Penza Regional Museum of Local Lore
But it turned out so strange that the era, one might say, the heyday of weapons with wheel locks simultaneously became the era of the emergence of exceptionally perfect samples of much older weapons, for which this time became at the same time the end of its existence. But we will talk about what kind of weapon it was next time ... 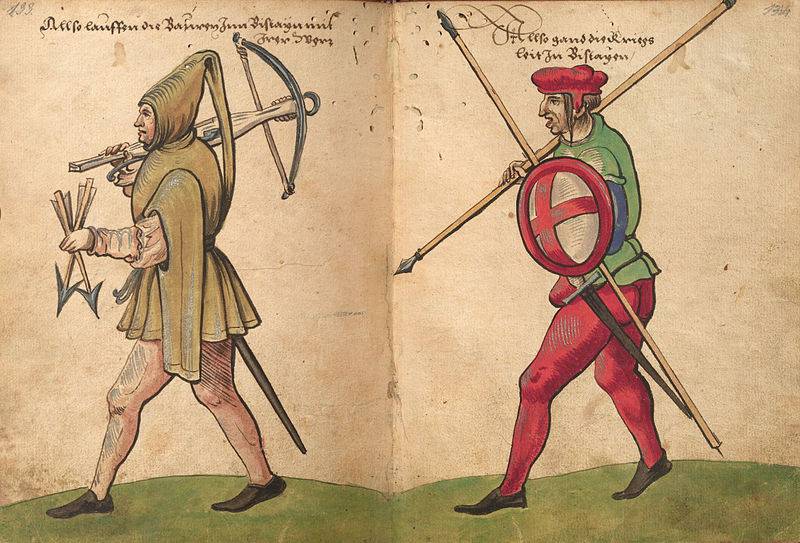