With the clarity of a clockwork. Supply of German troops at the beginning of the war 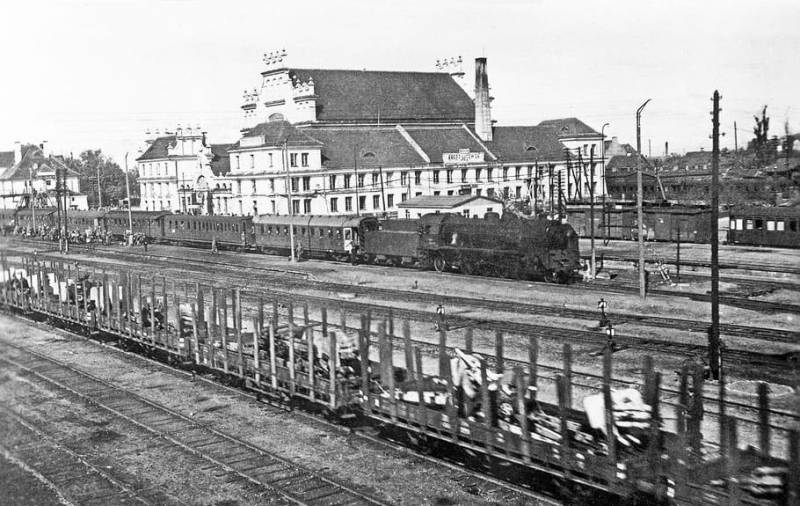 I considered this topic for a long time, back in the book "Fiasco 1941. Cowardice or treason?", Published in 2015. The book was generally devoted to the polemic with Mark Solonin (and I managed to catch him on the direct falsification of the memoirs of Lieutenant General IV Boldin; pp. 301-306, who is interested). But there I tried to make out a number of points related to the preparation of an attack on the USSR, in particular, rail transportation for the supply of German troops stationed on the Soviet-German border, as well as how much Soviet intelligence knew all this. It turned out that Soviet border intelligence had collected enough information that clearly indicated that an attack was being prepared. In the German literature, some information was found about rail transport in Poland during the preparation for the attack, from the end of 1940 to June 1941. But on the whole, the data were scarce and lackluster. I always wanted to look at the process from the inside: how it was organized and how it happened.

Dreams come true, and I managed to find a file on the transportation and accumulation of military supplies (ammunition, fuel and food) by Army Group B from December 1940 to the end of May 1941.

Well what can I say? All this was arranged with the precision of a clockwork. Now, if on what example and see the importance of a well-organized rear for the German army, then on this.

How was it in its most general form?

In general, the process of transportation and stockpiling proceeded as follows. OKH first, in mid-December 1940, requested data on the storage capacity at the disposal of three armies that were part of Army Group B: 4th, 17th and 18th. After receiving information about the capacity of the warehouses and the amount of goods already delivered, a plan was drawn up on how much more ammunition, fuel and food should be delivered. The plan was expanded across the armies, according to the supply districts created on their territories, up to a specific warehouse, designated by a code name.

The necessary goods were in military warehouses in Germany. OKH was planning their loading and transportation to Poland. An exact train schedule was sent to the headquarters of the army command from the OKH, indicating the nature of the goods and the destination.

The command of the armies accepted the cargo, placed them in warehouses with the help of their rear units, and then reported to the OKH on the number of accepted supplies and the fulfillment of the unloading plan. Such reports were compiled on average once every two weeks. The first report was drawn up at the end of January 1941, and the last one, available in the case, at the very end of April 1941. Staff correspondence quite well reflects the entire large amount of work that was done to accumulate reserves necessary for the military campaign against the USSR.

In the future, links will be provided on the following case - TsAMO RF, f. 500, op. 12454, d. 98. To illustrate this process, I will give a few examples, as well as general statistics of stock accumulation. This is important for understanding the further course of events.

There are no maps in the file, but there are accompanying notes. On December 29, 1940, 4th Army sent a detailed report on the state of the warehouses to Army Group B and the Quartermaster General of the General Staff. The warehouses in the border area were designated by code names, for example, an ammunition depot 10 km northwest of Biala Podlaska was designated Martha. Warehouses in the deep rear were not designated by code names.

An interesting picture. 36% of ammunition, 72,9% of fuel and 36% of food were moved to the border and distributed among warehouses with a capacity of 2 to 6 thousand tons each.

The file contains a document with a general overview of the state of stocks for the entire army group, but without a cover letter. Apparently, the case was drawn up at the headquarters of the army group as a kind of reference book, and the documents were selected there on purpose (there is a German inventory of the contents, and the documents themselves are arranged thematically and sequentially).

This document contains the most important information - coefficients. Ammunition (Ausstattung: A.) - 600 tons, refueling for the division (Betriebstoffsverbrauchsatz; VS) - 30 cubic meters, daily supply (Tagessatz; TS) - 1,5 kg per person. In principle, there is no particular need for us in this, since in further documents all figures are given in weight or in volume for fuel. However, it may be useful for other researchers working with German military documents. 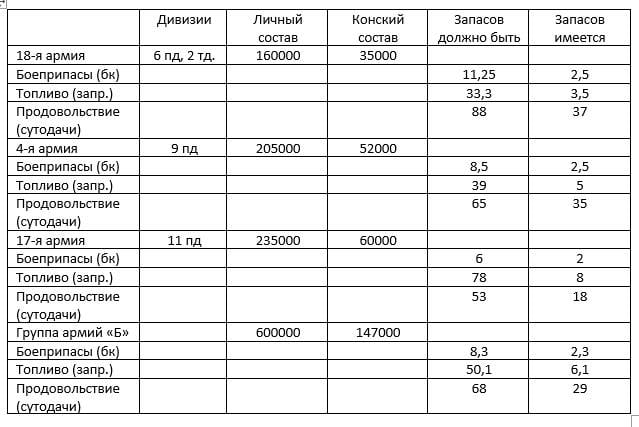 On December 18, 1940, the command of Army Group B received an order from the OKH that it was necessary to complete the unloading and placement of all planned cargo by May 1, 1941; the goods should be delivered to the final warehouses as soon as possible or, in any case, without the involvement of railways in intermediate transport. From 20 February 1941, each army will receive 8 trains per day with supplies, which must be unloaded immediately.

The armies were instructed, starting from January 15, 1941, to report on the 1st and 15th day of each month on the state of unloading (l. 18-20). A sample of such a report was even attached to the order so that the staff officers would do everything in the same way. 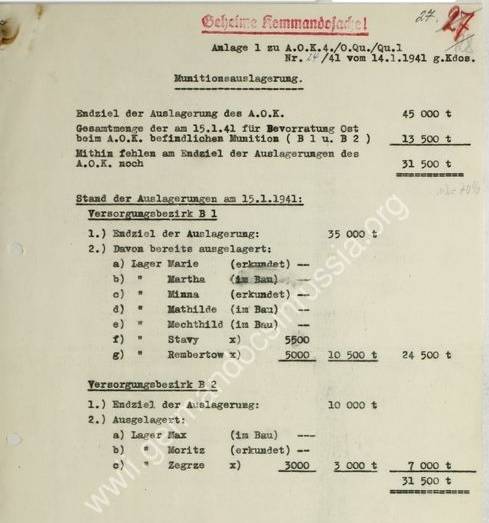 One of the reports on unloading and delivery to warehouses
The territory of Army Group B was divided into three supply districts, which at the end of January 1941 were renamed North, Center and South districts (previously called A, B, C) and the distribution of warehouses between these districts. The file preserved the distribution of ammunition depots between supply districts (pp. 66-67).

The transportation itself was organized with maximum clarity, and here the whole German order manifested itself in full. For example, on January 4, 15, an order was sent from OKH to the 1941th Army with a timetable for trains with ammunition.

And so on for each train separately. Such schedules were drawn up for each army and sent to the army command in advance. If you adhere to the procedure for loading and preparing for the departure of trains, it becomes very convenient to receive them and quickly unload them, as well as place ammunition in accordance with the nomenclature and purpose. In subsequent timetables, which were drawn up in March-April 1941, when the railways were switched to maximum traffic, they also began to indicate the destination of the train and the name of the supply district to which it was sent. 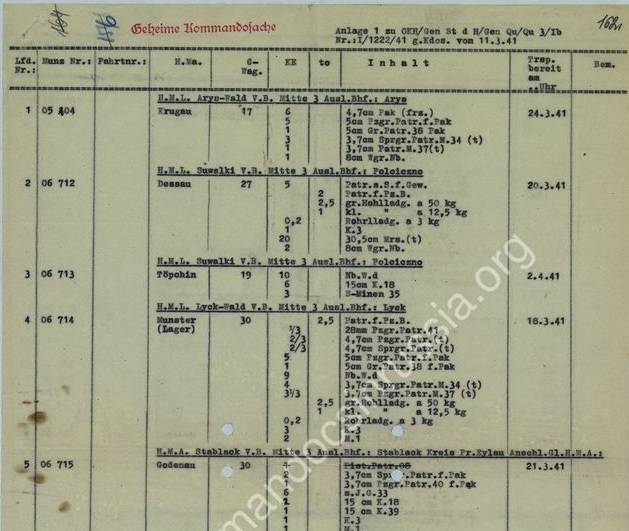 They brought almost everything

This work required great care and organization, but the result is obvious. The whole picture is easier to display in a summary table (ammunition and food - in tons; fuel - in cubic meters): 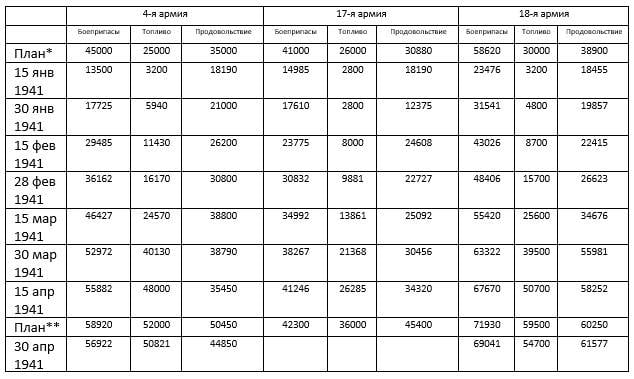 The table shows the original plan (*), while the plans for the delivery of goods were repeatedly revised and increased, as well as the final plan indicated in the last reporting document (**). There is no data on the 17th Army for the end of April 1941 in the file.

For example, the 17th Army, which became part of Army Group South and was advancing in Ukraine, already in mid-April 1941 had 6,2 bq of ammunition, 79,6 refueling, 97,3 days of food supplies. The 4th Army from Army Group Center, advancing on Minsk and Smolensk, in May 1941 had 10,3 bq of ammunition, 191,9 fuel fillings and 164 days of food supplies. The army was very well supplied, and its reserves significantly exceeded the original plans. Probably, the warehouses of this army were also intended as a supply reserve for the entire Army Group Center. Some of the warehouses, about half, were moved to the border and were located at a distance of about 20-30 km from it.

Ctrl Enter
Noticed oshЫbku Highlight text and press. Ctrl + Enter
We are
Diplomats of the People's Commissariat of Defense: on the eve and during the warChernobyl notebook. Part of 3
Military Reviewin Yandex News
Military Reviewin Google News
218 comments
Ad