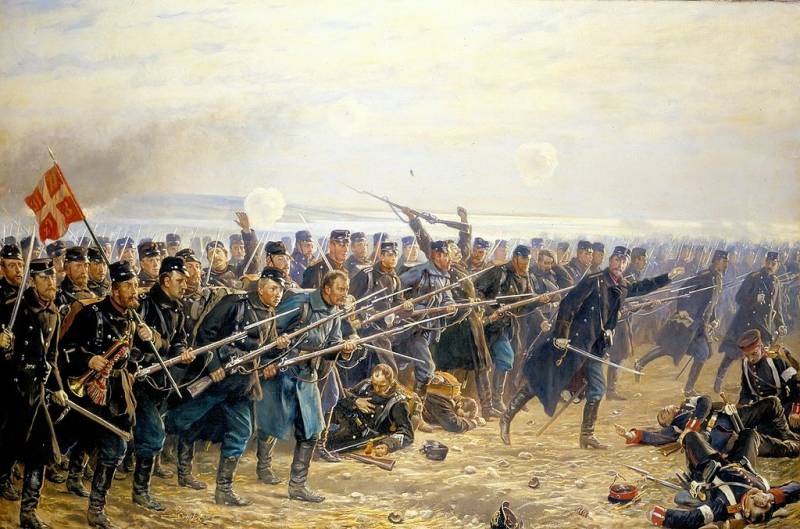 And angrily sees Karl the mighty
Not upset clouds
Unhappy Narva fugitives,
And the thread of the shelves is shiny, slender
Obedient, fast and calm,
And a row of unshakable bayonets.
(Poltava A.S. Pushkin)
History weapons. With the advent of rapid-firing primer and then cartridge magazine rifles, the huntsmen as a kind of infantry ceased to exist. The last time in uniforms different from the general army, they fought during the American Civil War. These were “Berdan's shooters”, but their debut, although impressive, remained in history “the last chord in an old play about gamekeepers”. Already in the Russian-Turkish war of 1877-1878. the use of American Winchesters by the Turks in the battle near Plevna did not allow our infantry to approach the Turkish trenches and bring matters to the point of being hit with bayonets. Well, with the discovery of smokeless powder, there was no hope that the infantry in a line formation would go into bayonet attacks. Nevertheless, the inertia of thinking of various military authorities was so great that their opinion was "a fool's bullet - a bayonet well done", "shoot rarely, but accurately!" remained dominant for a long time. The inconsistency of these judgments was shown, however, already by the battles of the Austro-Danish-Prussian (Danish-German) and Franco-Prussian wars, which cost huge losses in the infantry of the supporters of the previous military tactics. And there were still used single-shot rifles that fired black powder cartridges! By the way, the same counterattacks on the Prussian regiments in the Battle of Dyubbel led only to huge losses, since they were met with fire from rapid-fire needle rifles. What, then, could be expected from the coming wars, in which soldiers would fight with magazine rifles in their hands, and smokeless gunpowder would be used in cartridges ?! 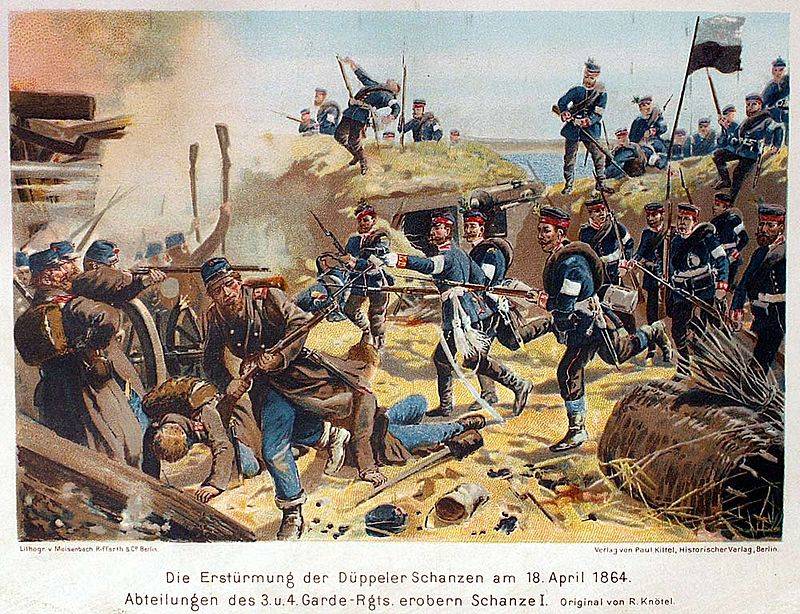 Prussian soldiers attack the Danes at the Battle of Dubbel. Richard Knotel (1857-1914)
No one disputed the merits of needle bayonets, but in addition to them, a cleaver was also required. And in the new conditions, when almost hundreds of cartridges were shot in battle, it seemed to many too ... not rational to wear both a cleaver and a bayonet. The time when, God forbid, a dozen cartridges were fired by a soldier for the entire battle, are now over. They tried to reduce the layout, saving literally on grams, just to give the soldier more cartridges, so that the idea of ​​a universal bayonet was gradually actualized in the minds of even the most traditionally thinking generals. Although not immediately and not everywhere ... 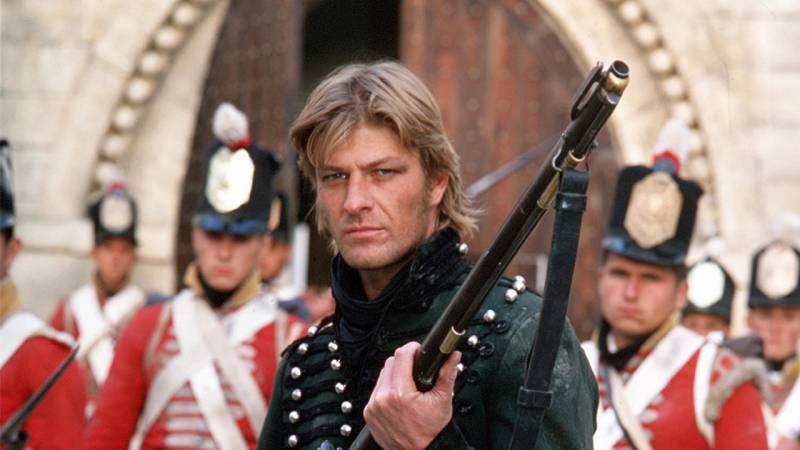 The simplest attachment of the blade bayonet was carried out on the Baker rifle. On the right of the barrel (on the right, because there was a ramrod at the bottom!) There was an L-shaped rack (very clearly visible in the photo), which entered into the groove of the handle and a spring latch. In this case, the handle and blade were located horizontally on the right. This slightly shifted the balance of the gun, but the blade fit well into the body between the ribs. A scene from one of the films of the series about the adventures of the King's Shooter Sharp
So, in England, the bladed bayonet was introduced in 1854 and even managed to take part in the battles of Alma and Inkerman during the Crimean War. The blade bayonet also appeared on the French Chasspo rifle (see previous material - V.O.), as well as in the armies of a number of other countries.

As one British newspaper wrote,

the committee, when recommending this new bayonet, apparently had in mind the fact that from now on bayonets will be less frequently used as a weapon of attack and defense than in the old days; therefore they wanted to replace the old bayonet with a more general instrument. 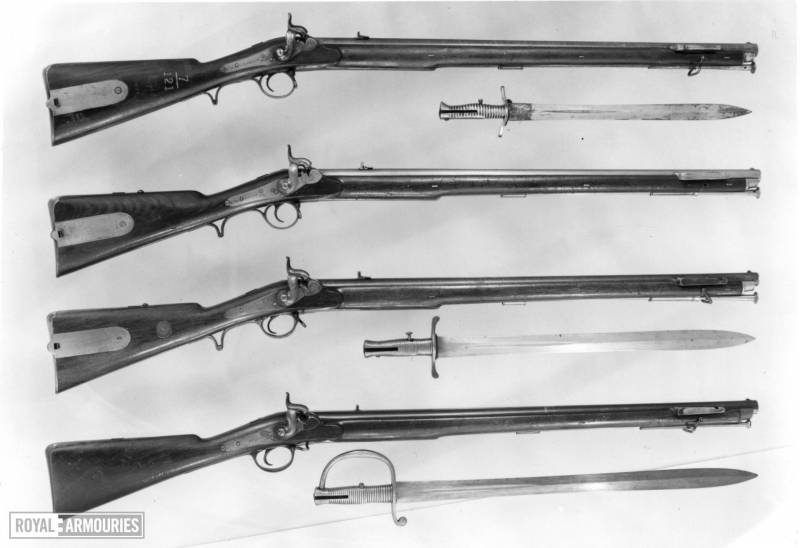 English fittings and bayonets (1841). Royal Arsenal, Leeds
Already for the 1871 Martini-Henry rifle, a machete bayonet with a blade expanding towards the end and a sawtooth back was adopted. It proved to be a very effective chopping weapon, but it was made only in small quantities, since it turned out to be much more expensive than the classic piercing bayonet.

The traditional needle bayonet of the Martini-Henry rifle, 1877-1899. Royal Arsenal, Leeds
Then, already in 1875, a bayonet-saw was adopted to the Snyder rifle (artillery carbine) as the most convenient for artillerymen, as well as sappers and ... army butchers, since with its help it was possible ... to butcher livestock for meat!

French needle bayonet of the early XNUMXth century. with fastening ring (photo by Alain Daubresse)
The first such bayonet was adopted by the German states in 1865; until the middle of the First World War, approximately 5% of bladed bayonets were supplemented with a saw version. In Belgium, such bayonets appeared in 1868, in Great Britain the first samples - in 1869, in Switzerland - in 1878 (the last model in 1914). The original “reverse saw” bayonets were produced for sappers, and to some extent the aspect of the bayonet itself was secondary to the aspect of the “tool”. Later, the German "saw bayonets" became indicators of the rank of their owner rather than a functional saw. And it was not very convenient to saw with such bayonets. Therefore, in most countries, by 1900, sawtooth bayonets were abandoned. The German army stopped using the bayonet with a "reverse saw" in 1917 - and then only after the protests of the world community against the fact that the serrated blade caused unnecessarily serious wounds when used as a fixed bayonet.

Nevertheless, double-edged bladed knives were used very widely. These were: the British Mk2 bayonet of 1888 for the "Lee-Metford" rifle (the first bayonet-knife, adopted by the army of the United Kingdom), the British long blade bayonet with a bow-hook (disappeared after 1913) 1907 for the "short rifles "Lee-Enfield" and even ... the front bayonet of the German Nazi police in 1940. The latter had neither a groove on the handle, nor a latch, that is, it was simply impossible to attach to the rifle, but on the other hand he had a beautiful eagle head on the handle, and the handle itself was decorated with reindeer antlers! 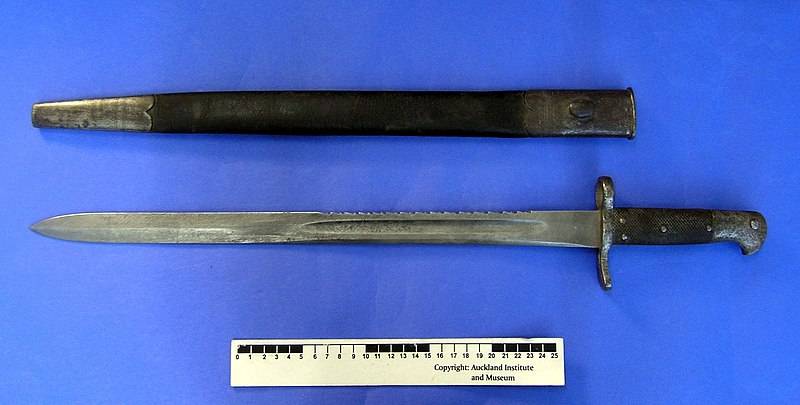 British bladed bayonet, 597 mm long, model 1875. Designed for gunners armed with a rifle (Snyder carbine), type 1. Photo of Auckland Institute and Museum, New Zealand
Since 1870, the US Army has been producing bayonets-shovels for infantry regiments according to the design of Lieutenant Colonel Edmund Rice, and such bayonets could not only be stabbed and used as a digging tool, but also used ... instead of a spatula for plastering walls; and sharpened on one side, it could cut sticks and pegs to set up a tent. True, in 1881 this "spatula bayonet" was declared obsolete by the US Army.

American "bayonet-spatula" 1871-1899 Royal Arsenal, Leeds
From 1899 to 1945, the Japanese used a very long (25,4 cm) bayonet with a "type 30" blade on the already very long Arisaka rifle. Obviously, this was done to compensate for the growth and relatively small length of the arms of the Japanese army infantry.

Close up of the same bayonet. A typical yatagan bayonet! Reverse curvature blade with fuller, T-shaped profile with reinforced "back" (photo by Alain Daubresse)
The bayonet-epee (which had lost the hook and loop) of the French Lebel rifle was also very long, which was also very long in itself. This made it difficult to use it in trenches with a bayonet attached, but it helped in the desperate bayonet attacks that French soldiers went to at the very beginning of the First World War. 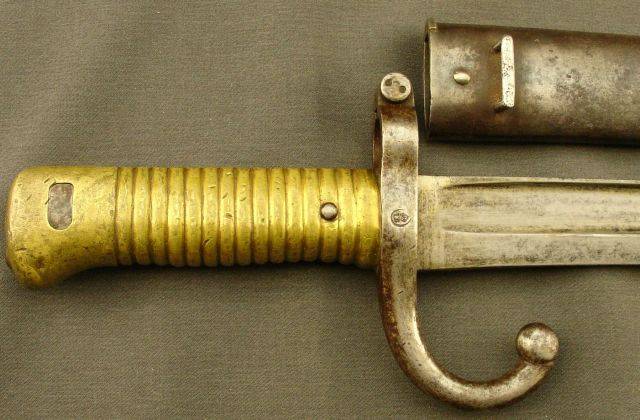 All-metal Comblane carbine bayonet handle with crosshair hook (photo by Alain Daubresse)
The French army received this bayonet in 1886, and its length was 52 cm, as a result of which the total length of the rifle and bayonet was 1,8 m.In response, Germany adopted the Seitengewehr 1898 bayonet-knife 98 cm long for the Mauser rifle model 50. But the total length of the rifle with a bayonet turned out to be 1,75 m, that is, it was inferior to the French one quite a bit. 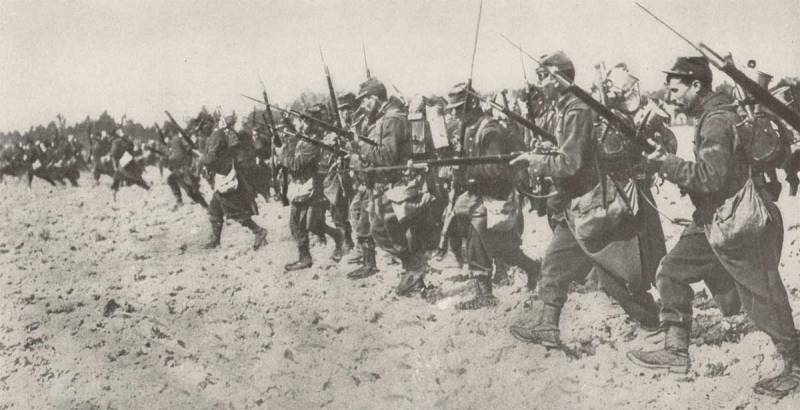 French infantry with Lebel rifles mod. 1886 learns to go into a bayonet attack. Photo of 1913
In 1905, the German army adopted a shortened 37-centimeter bayonet Seitengewehr 98/06 for the engineering troops, and in 1908 also the Karabiner Model 1898AZ short rifle, which was produced in limited numbers for cavalry, artillery and other special forces. Long-barreled rifle "Mauser 98" remained in service as the main infantry small arms. Moreover, the German military continued to promote in every way the idea of ​​defeating the enemy on the battlefield not only with fire, but also with bayonets. Learning bayonet techniques was equated with the ability to shoot accurately. An impressive bayonet training technique was developed, which was later adopted by the armies of many other states, including the US Army, where on the eve of World War I a 40,6 cm long blade bayonet was used with the Springfield rifle. 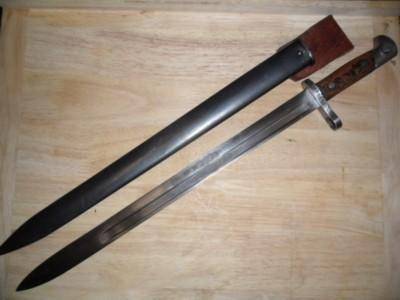 Blade bayonet for the Winchester 1895 rifle. Rifles of this system during the First World War were ordered by the Russian government in the United States for the Russian imperial army (photo by Alain Daubresse)
Before the war, three types of blade bayonet mounts were created. The first is similar to the bayonet mount on the Baker rifle (side right). The second is for M88 and M98 Mauser rifles with a bayonet attached under the barrel and a T-shaped slot for a pin in the handle. With lateral fastening using a ring in the crosshair, with which the bayonet handle was put on the barrel, while its pommel was fixed to it using a T-shaped protrusion on the barrel and a corresponding profile groove in the handle. Finally, the bayonet under the barrel is similar to the 1914 Enfield rifle, when the bayonet is attached under the barrel in the same way as the German Mauser bayonet, but also behind the ring on the crosshair with an emphasis on the base of the front sight.

In the Russian imperial army, tetrahedral needle bayonets were traditionally used, which were attached to the barrel using a sleeve with an L-shaped groove. It was forbidden to remove them, since the rifle was fired with a bayonet. However, so that the bayonet did not interfere, it was often removed and put on again, turning the point towards itself.

Author:
Vyacheslav Shpakovsky
Articles from this series:
"In the blue cold of bayonets ..."