An airplane for its niche. Short C-23 Sherpa 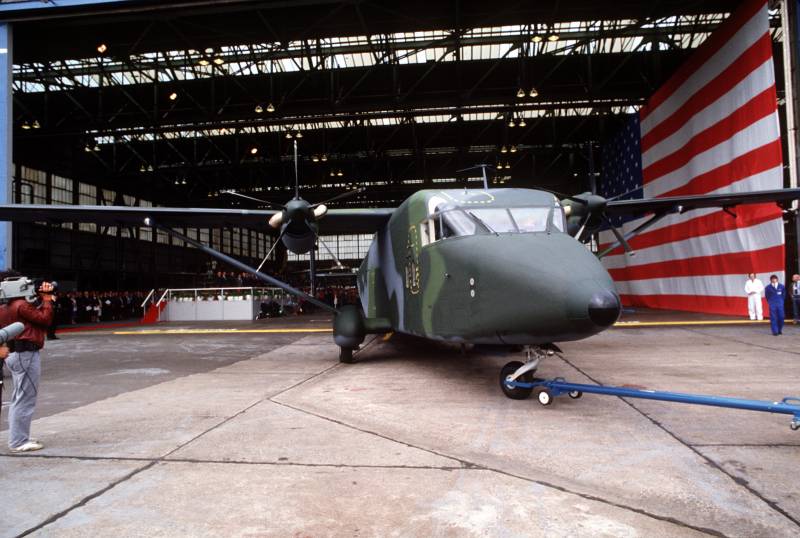 By the early 23s, the US Air Force had a number of military transport aircraft with different characteristics. However, new challenges arose, and none of the available samples could cope with them. The answer to this challenge was the new Short C-XNUMX Sherpa.

In the early eighties, US and NATO experts conducted another study of the Air Force's prospects and issued recommendations for their further development. It was found that the existing fleet of military transport aircraft is not the optimal tool for supplying air bases and deployment airfields in Western Europe. In a major war, this threatened to disrupt the combat work of tactical aviation.

The way out of this situation could be a new light military-technical cooperation. He was required to transport cargo weighing more than 2 tons the size of the turbojet engines of American aircraft, to land and take off from shortened strips, to fly in typical European weather conditions, etc. 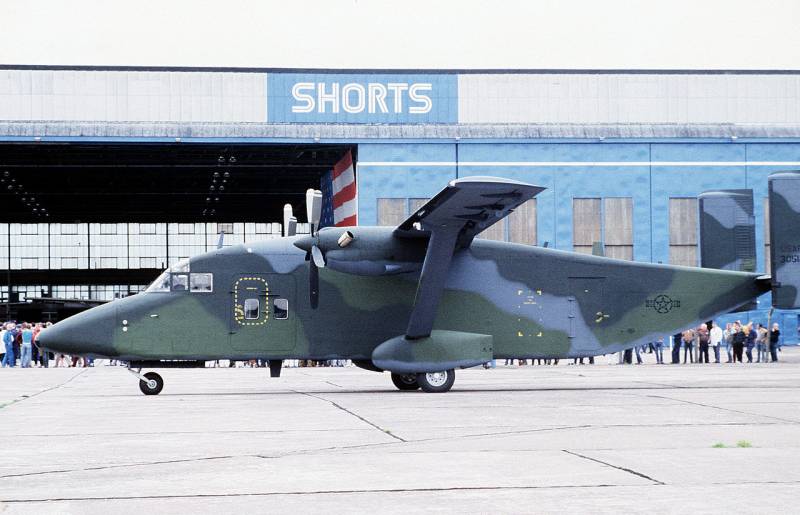 The first aircraft in the series, side view
In 1982, the Pentagon issued preliminary requirements for a promising aircraft, and soon received the first applications. A few months later, in 1983, they launched a full-fledged development program called EDSA (European Distribution System Aircraft).

Seven companies from the United States and other NATO countries applied for the EDSA competition. In accordance with the customer's requirements, all projects were based on existing equipment samples. In the future, this simplified the assessment of projects and the selection of the most successful ones, as well as subsequent construction and operation.

After examining the proposals, the Pentagon selected two finalists. They turned out to be a modification of the passenger aircraft "330" called Sherpa from the British company Short Brothers and the modernized aircraft C-12 Aviacar, created in cooperation with the Spanish company CASA and the American McDonnell Douglas. 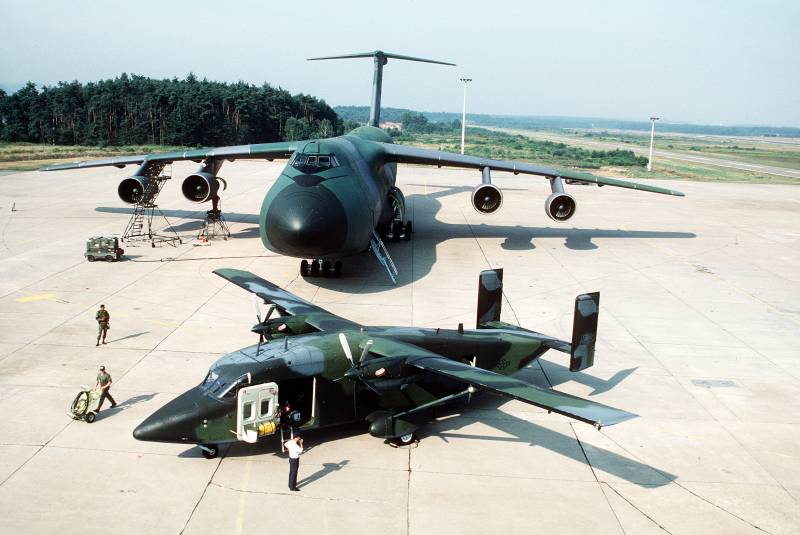 Light C-23A and heavy C-5A
In 1982-83. two aircraft have passed factory and army tests. The British military-technical cooperation "Sherpa" was considered more successful. In March 1984, Short received its first $ 165 million order for 18 production vehicles and serviced them for 10 years. They also granted an option for 48 aircraft worth almost $ 500 million. The production aircraft were to be supplied to the US Air Force under the designation C-23A Sherpa.

The development of the future C-23A took minimal time. The fact is that the basic Short 330 aircraft was brought to series in 1975-76, and immediately after that they began to create its specialized modifications. In particular, transport options with side doors and a stern ramp were being worked out. The last project was developed, and already in 1982 the first flight of the prototype took place.

The C-23A was a twin-engine turboprop strut-braced high-wing aircraft with an H-shaped tail assembly. The aircraft was built on the basis of a fuselage with a length of 17,7 m with a square cross section and characteristic nose and tail contours. A straight wing with a span of 22,76 m was used with developed mechanization, which simplifies takeoff and landing. The airframe was mainly made of aluminum with separate steel parts. 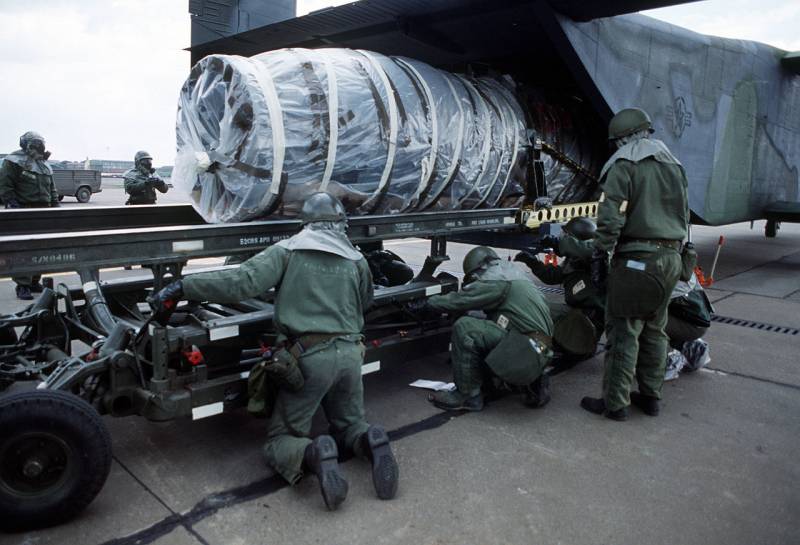 Working with cargo - turbojet engine, 1985
In the gondolas on the center section there were two Pratt & Whitney Canada PT6A-45-R turboprop engines with a capacity of 1200 hp each. The motors were equipped with Hartzell five-blade variable-pitch propellers with a diameter of 2,82 m.

Inside the fuselage, it was possible to place a cargo-passenger cabin with a length of 8,85 m and a section of 1,98 x 1,98 m. In its bow, on the left side, there was a door. In the tail, a descending ramp was placed, on either side of which there were two side doors. The cabin could accommodate up to 30 people, up to 3 standard cargo pallets or other load. To simplify loading operations, three guides with rollers were installed on the cab floor.

The aircraft was operated by two pilots, the third crew member was responsible for handling cargo. During the revision of the original project "330", new devices and systems were introduced that met NATO standards and ensured full operation in the Air Force.

An empty C-23 military vehicle weighed 6,5 tons, and the maximum take-off weight reached 10,4 tons. Landing on any runway with a mass of no more than 10,25 tons was allowed. The payload was 3175 kg. The fuel supply exceeded 2 tons. 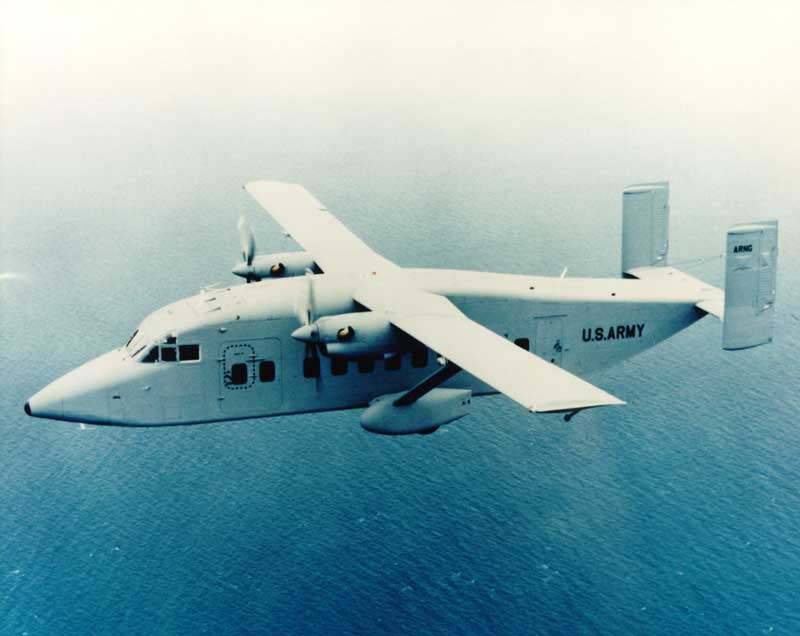 VTS C-23B Army Aviation
An efficient propulsion system combined with a well-constructed wing made it possible to fly at a cruising speed of 350 km / h and ensure a stall speed of at least 135 km / h. The length of the takeoff run and the run, depending on the load and the type of runway, did not exceed 1000-1200 m. The flight range with the maximum load and full tanks exceeded 360 km. The maximum range is 1240 km, but the load was reduced to 2,2 tons.

Aircraft in the Air Force

The execution of the Air Force order was not difficult. Already in August 1984, the first production aircraft was rolled out at the Short plant in Belfast. In the coming years, 17 more units of the first batch were built. In 1985-86, the adopted vehicles were transferred to continental Europe. According to the plans of the Air Force, military transport aircraft were to be based at the Zweibruecken airfield in Germany and, if necessary, fly to other air bases, providing the transportation of various cargo and personnel. According to calculations, the total annual flight time of new military-technical cooperation should have reached 12 thousand hours.

Despite the high load, the received C-23A coped with the assigned tasks. As a result, the Air Force decided not to exercise the option and not to order new aircraft. Active operation of Sherpa aircraft in the "European distribution system" with constant flights between different bases continued until the end of 1990, when NATO adopted a plan to reduce forces in Europe. 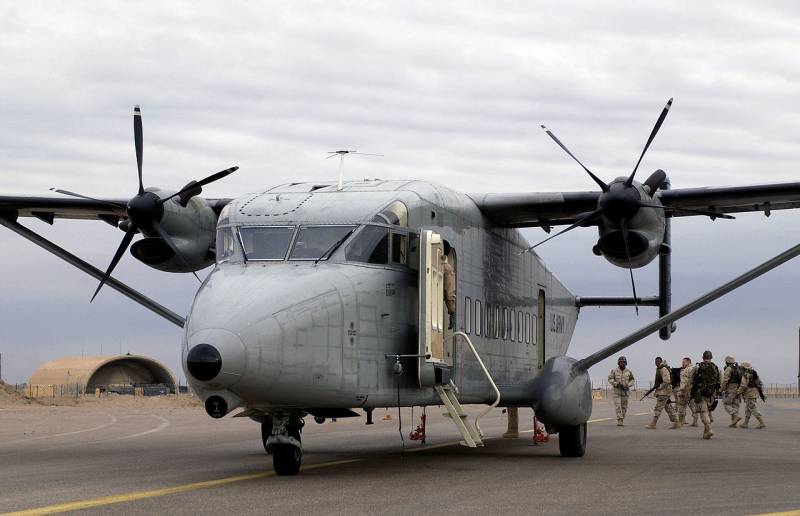 C-23B in Iraq, December 2003
The entire fleet of light military-technical cooperation was withdrawn to the USA, after which it was written off and distributed to various structures. Three vehicles went to the Edwards Air Force Base Flight School, where they served until 1997 and when they were fully developed. Eight Sherpas were donated to the Army Air Force, and the remaining seven were donated to the US Forest Service.

By the time eight C-23As were received from the Air Force, the ground forces already possessed the equipment of this family. Back in the mid-eighties, the army ordered four Short 330s to work at the Kwajalein training ground. Then they ordered ten more aircraft - for the National Guard and repair units. It is interesting that the technique of the first batch retained the previous designation "330", and the military-technical cooperation of the National Guard was renamed C-23B.

In 1990, a contract was planned for 20 newly built C-23A aircraft for the army and the National Guard, but Short had already closed their production. Instead, the army had to buy used Short 360 aircraft and deeply modernize them. The onboard equipment was updated; also replaced the tail unit and installed a ramp. These aircraft were designated C-23B + Super Sherpa. Later, two more civilian "360" were rebuilt. 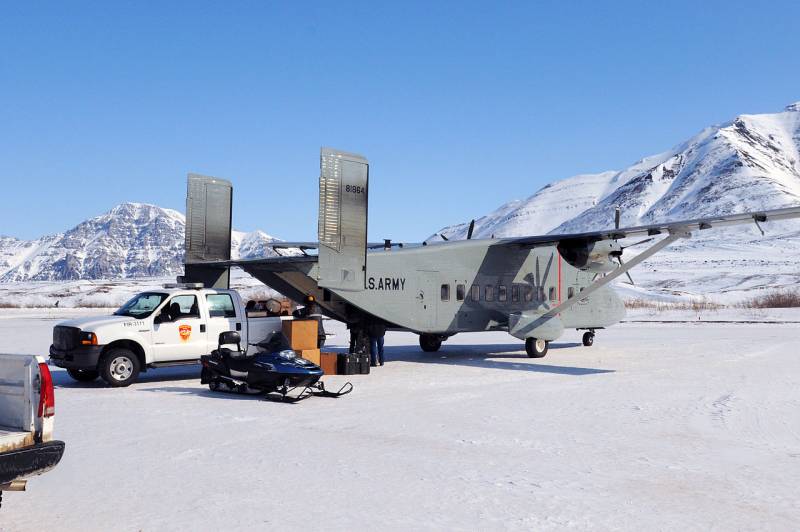 Trained transport missions in the harsh conditions of Alaska, April 2011
In 2003, several C-23B / B + aircraft were transferred to Iraq to support the activities of the American contingent. They have become a convenient addition to heavier military vehicles and a cost-effective alternative for helicopters. In addition, to participate in the Constant Hawk reconnaissance operation, special equipment was installed on seven C-23Bs. Two of them collided and crashed on their way to Iraq, while the rest have been successfully operating for several years.

In the 23s, a modernization program for the C-43C project was implemented, which provided for the replacement of part of the equipment. 23 cars underwent such an update. The C-XNUMXD project was also developed, but only four aircraft were redesigned on it, after which work stopped.

Not only in the army

In 2007, the Pentagon made a fundamental decision to abandon the obsolete Short C-23B / B + and replace them with modern aircraft of a similar class. By this time, the ground forces had 43 vehicles; in the National Guard there were no more than 16 units. In the coming years, it was planned to write off Sherpa and sell it off. Instead, it was planned to purchase Italian Alenia C-27J Spartan aircraft. 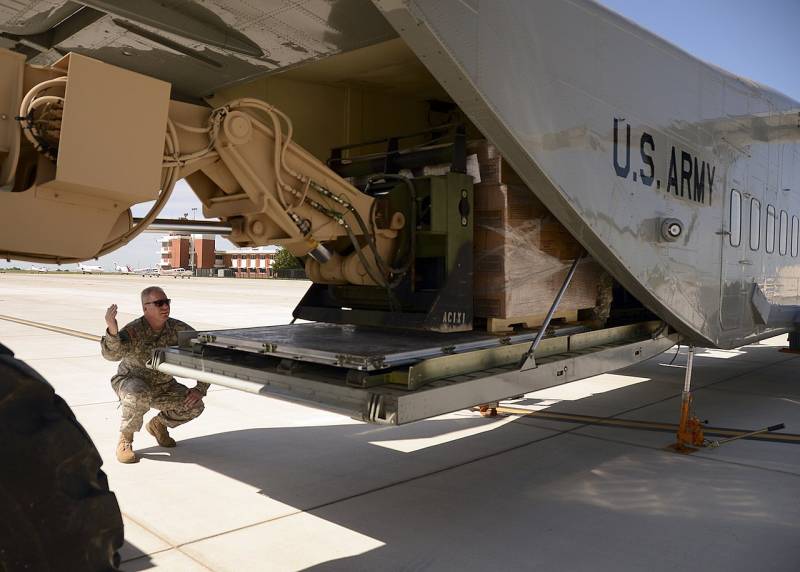 Unloading an aircraft operated by the National Guard, 2013
This commercial proposal interested two American carriers. Several C-23Bs were bought by Era Aviation, which operates routes over Alaska. Another party became the property of Freedom Air and flew to about. Guam. Another civilian operator was the Philippine airline Royal Star.

By the mid-tenths, eight aircraft were transferred to the Brazilian army. The same number of vehicles were sent as support to Djibouti. In addition, it was reported about the possible supply of equipment to Estonia and the Philippines.

Two planes were handed over to museums. One of the Short 330s operated at the Kwajalein test site is now in the Millville Aviation Museum. On display at Beaver County Airport in Pennsylvania is one of the C-23Cs formerly owned by the army.

Decommissioned C-23B / B + / C based storage, March 2020
The remaining aircraft were transferred to the Davis-Monten base for long-term storage. With the appropriate solution, they can go for repairs before being sold to new operators - or they can go for disposal.

In your niche and not only

As part of full-scale serial production, Short Brothers built a total of 18 C-23A Sherpa aircraft. The option for 48 cars was never exercised. Nevertheless, the new operators needed large quantities of such equipment - and rebuilt the short 330 and Short 360 aircraft of similar design. Due to this, the C-23A / B / B + fleet increased by almost 40 units.

The Short C-23 Sherpa aircraft was created for a specific niche in the US Air Force logistics system and, as shown by the operation, was fully consistent with its role. It could remain in the ranks for decades and ensure the operation of the bases. However, in 1990 the situation changed, and the need for such equipment disappeared. Plans for further production were canceled, and soon the Air Force abandoned the no longer needed aircraft.

Subsequently, the operation of the C-23 and its versions was mastered by other structures, incl. from other countries. In all cases, the Sherpa military-technical cooperation successfully coped with the assigned tasks and received high marks. However, the positive experience did not outweigh the specific role and features of the operation. The C-23 did not become truly widespread, and now its история is approaching its completion.