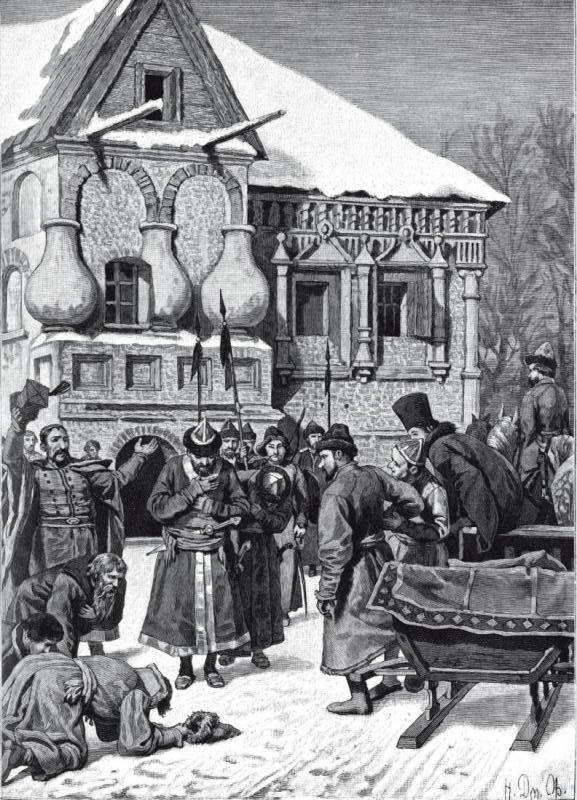 Arrival of Dmitry the impostor to Kaluga after fleeing from Tushino. Painting by N. Dmitriev-Orenburgsky

The "good king" looked more and more like a formidable autocrat. The boyars and nobles were suspected of betrayal. His "guardsmen" seized the courtiers and executed them. The Polish prisoners were tortured and drowned.

Tsar Vasily Ivanovich understood that he would not defeat the Tushino thieves on his own. The people's liberation war, which was already blazing in Russia, frightened the boyars.

Shuisky's government did not follow the path of supporting and forming popular militias led by popular voivods. Shuisky preferred foreigners. The choice fell on Sweden. The Swedes were the enemies of the Poles. And King Charles IX was the uncle of the Polish monarch Sigismund and took the Swedish throne from his nephew.

Sweden sought to use the difficulties of Russia, round up its possessions at our expense and prevent the Commonwealth from occupying Moscow.

Negotiations in Veliky Novgorod with the Swedes were led by a relative of the tsar, who had already distinguished himself in the war against the Bolotnikovites, Skopin-Shuisky.

In February 1609 the Vyborg Treaty was signed. Sweden provided an army under the command of De la Gardie. These were mainly mercenaries from Europe - all sorts of Germans, Scots, etc. The Shuisky government was inferior to Korel with the district, paid the mercenaries high salaries.

Skopin-Shuisky gathered a militia in the north. And on May 10, a campaign began with the aim of cleansing the Russian state of thieves. In the summer, the prince defeated the Tushins in several battles. But further progress towards Moscow was delayed due to disputes with the mercenaries. They demanded the promised money. The Swedes were waiting for the transfer of the Korela fortress. Only by the fall did Delagardie receive new confirmation of the terms of the Vyborg treatise from the tsar and Skopin.

Skopin defeated the troops of Sapieha and Zborovsky in October 1609. And he settled in the Aleksandrovskaya Sloboda. In November, the boyar Sheremetev joined him, who led the militia of the lower towns (Lower and Middle Volga). On the way, he suppressed a revolt of the non-Russian peoples of the Volga region. In December, Skopin and De la Gardie restored the alliance. Hetman Sapieha, fearing the significantly stronger army of Skopin-Shuisky, at the beginning of 1610 lifted the siege from the Trinity-Sergius Monastery. 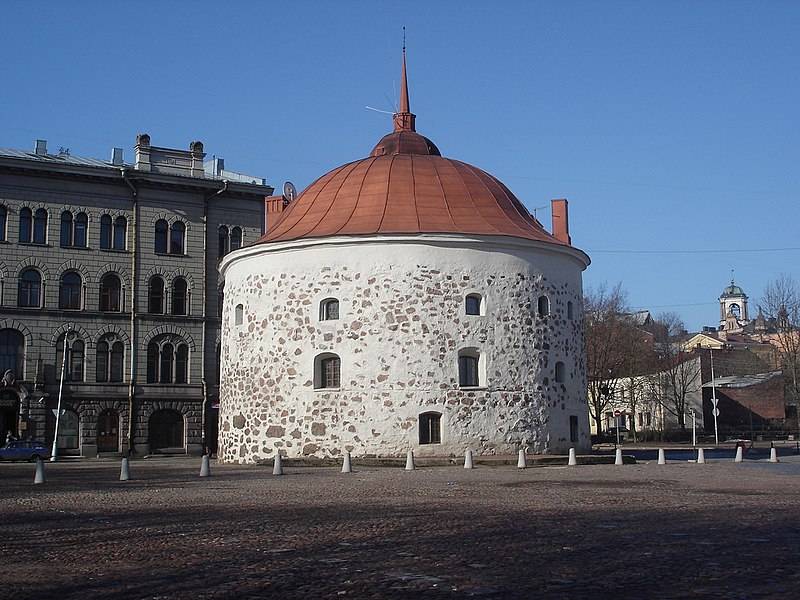 The Round Tower in Vyborg, where an agreement was signed in February 1609.

The collapse of the Tushino mill

The people's war against thieves, failures in the siege of Moscow, the successes of Skopin in the north and other tsarist governors (Sheremetev, Pozharsky, etc.) led to the decomposition of the Tushino camp (How the Poles divided Russia). But the main blow to the Tushinians was dealt by Poland.

The Polish king Sigismund decided that the time had come. Enough for the Poles to hide behind an impostor, it's time to go and take the fruits of victory over Russia. The Polish army invaded the Russian state and laid siege to Smolensk (The heroic defense of Smolensk; How the Polish army stormed Smolensk).

In February 1610, an agreement was concluded to call the Polish prince Vladislav to the Moscow table.

The impostor's attempt to remind him of his rights made Hetman Ruzhinsky laugh. In December 1609, False Dmitry tried to escape with the help of the Cossacks, but was arrested. He was placed under house arrest. However, with the help of loyal people at the end of December, the Tushinsky thief was still able to escape. He disguised himself as a simple man and hid in an ordinary cart.

The impostor fled to Kaluga, where he created a new courtyard. This led to the collapse of the Tushino camp. Cossacks and part of the Poles led by Tyshkevich, who did not want to obey Sigismund, followed to Kaluga. The Russian nobility decided to support the position of the Polish king. In February, Marina Mnishek fled to Dmitrov to Sapega, and then to Kaluga.

Rozhinsky (Ruzhinsky) with the Poles loyal to him decided to join the king. It no longer made sense to stay in Tushino. Skopin was advancing from Sevr, whom Sapega could hardly restrain. In the south, in Kaluga, a new army of the impostor was gathering. Rozhinsky moved to Volokolamsk, to the Iosifo-Volotsky monastery. In March, his soldiers burned down the camp and left.

On the way, most of the Russian thieves fled, Rozhinsky himself fell ill and died. Shuisky's troops scattered the remains of the thieves in the Tushino area.

In the Kaluga period, False Dmitry II received full independence. At this time, he took up patriotic positions. He called for the killing of Polish and Lithuanian thieves. He tormented the Russian people with Sigismund's desire for the complete enslavement of Russia and its Catholicization.

Tsar "Dmitry" swore that he would not give up an inch of the Russian land and would die for the Orthodox faith. This impulse was supported by many. Many cities again swore allegiance to False Dmitry. A new army was formed around the impostor, in which the Russian element already prevailed. Later, many of the impostor's supporters became active members of the First and Second Militias. In Kaluga, as before in Tushino, its own system of government was created.

The Kaluga thief ordered all the cities that were on his side to seize the Poles, themselves and bring goodness to Kaluga. In a short time, "Dmitry" collected a large treasury, filled the dungeons with foreign hostages. The impostor was distinguished by great suspicion, suspected treason in the environment. He surrounded himself with a convoy of Tatars and Germans. Many Poles and his former supporters were tortured and executed. Executed Skotnitsky, the former captain of the guard False Dmitry I and the governor of Bolotnikov.

In the spring of 1610, the army of the impostor grew considerably stronger and recaptured Arzamas and Staraya Russa from Shuisky. Sapega, having visited the king's camp near Smolensk and achieved nothing, in June again joined the tsar "Dmitry".

In the summer, the Polish army under the command of Hetman Zolkiewski moved to Moscow. The Russian army was destroyed at the Battle of Klushino (Klushinskaya catastrophe of the Russian army). Poles approached Moscow from the west. In July, Sapega moved the troops of the Kaluga tsar to Moscow.

Supporters of "Dmitry" suggested the Muscovites to overthrow Shuisky. Then it was proposed to elect a new king.

On July 17, Vasily Ivanovich was overthrown and forcibly tonsured into a monk.

Having deposed Vasily, the Muscovites sent a delegation to the False Dmitry's camp near the Danilov Monastery. The boyar duma of the "tsarka" did not fulfill its promises regarding the removal from power and "Dmitry". Muscovites were offered to open the gates and meet the "legitimate sovereign". On August 2, the impostor settled in Kolomenskoye. On August 3, a detachment of Zholkevsky appeared near Moscow. Moscow boyars preferred to take the oath to Tsar Vladislav.

The Moscow oath pushed most of the Russian land away from the Seven Boyars. The apogee of anarchy has come in Russia. Many cities and villages preferred the power of the "true Tsar Dmitry" to the Polish prince with the bony rump of Moscow boyars. The patriotic propaganda of the Kaluga tsar also worked well. In the capital itself, many prominent people again began to establish ties with the impostor.

The myth of the "good tsar" was again circulating in Russia. Many cities swore allegiance to him, which used to oppose the Tushino thieves. Kolomna, Kashira, Suzdal, Vladimir and Galich took the side of False Dmitry. Cossacks, representatives of the urban poor and slaves poured into his troops in droves.

The nobles who were in the Kaluga court, on the contrary, fled to Moscow. A new wave of violence against the nobility began. The threat from the camp of False Dmitry forced the Semboyarshchina to let Zholkevsky's Poles into the capital. Pan Zholkevsky drove the Kaluga thieves away from Moscow. The impostor returned to Kaluga. 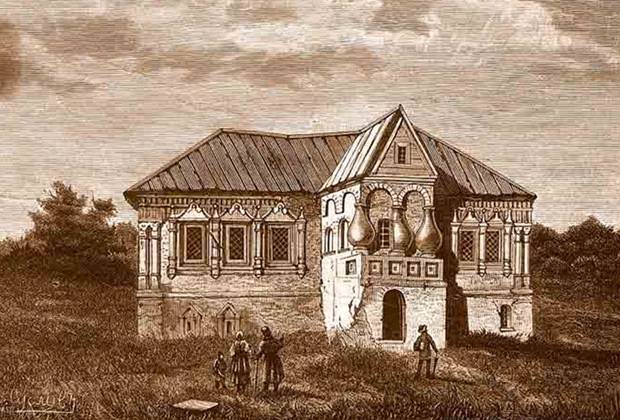 House in Kaluga, where False Dmitry II and Marina Mnishek lived. Engraving by M. Rashevsky after fig. I. Suslova. 1884 year

The Kaluga Tsar continued to expand his sphere of influence. His troops began to occupy cities in the south and southwest - Kozelsk, Meshchovsk, Pochep and Starodub. Kazan and Vyatka swore allegiance to "Dmitry". It became the center of the crystallization of Russian resistance to foreign intervention. His envoys openly campaigned for "the son of Ivan the Terrible." The guards and nobles could do nothing, the common people listened attentively to the envoys of "Dmitry".

The "good tsar" himself looked more and more like a formidable autocrat. The boyars suspected of betrayal. His "guardsmen" seized the courtiers and executed them. The Polish prisoners were tortured and drowned. Sapega again went over to the side of the enemy.

Semboyarshina organized an offensive. Government forces recaptured Serpukhov and Tula and created a threat to Kaluga. "Dmitry" was going to retreat to Voronezh, closer to the Cossack regions. The impostor planned to involve the Crimea and Turkey in the war, to replenish the army with the Cossacks to launch a new major offensive against Moscow.

However, ataman Zarutsky and prince Urusov defeated the enemy and captured many Poles. Zarutsky from the Tushino camp followed to the royal camp near Smolensk (apparently decided that the star of the "king" had sunk down), then with Zholkevsky arrived in Moscow. But relations with the masters did not work out, and Zarutsky returned to the impostor.

Pyotr Urusov avenged the Kasimov king Uraz-Muhammad, who was killed by the impostor. The Kasimov Tsar first fought on the side of Tsar Vasily, in 1608, together with his friend Prince Urusov, he went over to the side of False Dmitry II. He commanded a large detachment of Kasimov, Romanov and Astrakhan Tatars.

In April 1610, after a series of defeats and the capture of Kasimov by the boyar Sheremetev, they decided to go over to the side of the Polish king. The Khan arrived at the Smolensk camp. In the fall, Uraz-Mohammed returned to the camp of the impostor. There is information that the khan wanted to kill "Dmitry". But the khan's son reported to the king of Kaluga about the conspiracy. The Kasimov king was killed while hunting. Urusov was thrown into prison, but released after a while.

In December, during a walk, taking advantage of the fact that the impostor had only a guard of Tatars and several boyars, Urusov killed "Dmitry". After that the Urusovs and the Tatar guards fled.

“In Kaluga, however, has lost the fact that Prince. Peter Urusov killed the thief, agitated by the hail of all and the Tatars beat everyone who were in Kolug; I took his thief and honestly buried it in the cathedral church at the Trinity. "
The heir to the impostor was his son (or son of Zarutsky) Ivan Dmitrievich, who was born in Kaluga in December 1610 or early 1611.

Marina Mnishek for some time in Kaluga was considered the queen. Her rights and Ivan Vorenka were supported by the ataman Zarutsky with his saber.