Secret societies of future Decembrists and their programs 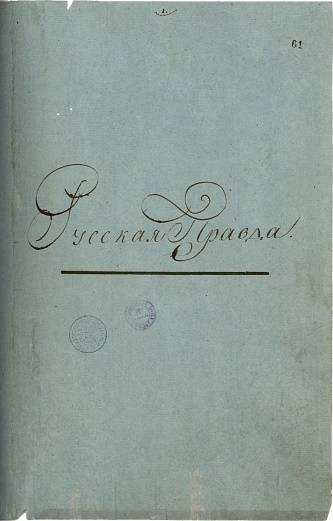 Comrade, believe: she will rise,
Captivating Star of Happiness,
Russia will wake up from a dream,
And on the ruins of autocracy
Write our names!
(To Chaadaev. A.S. Pushkin)
History the first in Russia against the autocracy. In our last article about the Decembrists, we parted on the fact that the Union of Welfare had dissolved itself. However, on its basis, in the spring of 1821, two large secret organizations at once arose in Russia: the Southern Society, headed by Pavel Pestel in Ukraine, and the Northern Society, headed by Nikita Muravyov, in St. Petersburg. It is believed that the Southern society was more revolutionary, while the Northern one was more moderate.

It is important to note here how the organization of conspirators differs from the organization of revolutionaries. The conspirators do not plan to change the social order. That is, their plans include the elimination of the monarch, who can be blinded, tonsured into a monk, strangled and even hidden in prison under an iron mask. But the conspiracy of the revolutionaries is more interesting. Here there is necessarily a program of reorganization of society, a break in gradualism, a rapid transition from one phase of development of the state and country to another. Both the Southern and Northern societies had such programs. For Yuzhny it was Pestel's "Russian Truth", which members of the society adopted as a goal-setting document at a congress in Kiev in 1823. And for Severny, Muravyov's "Constitution". True, the "northerners" had quite a lot of disagreements in relation to it, which weakened the position of society. Consider both of these programs ...

Wonderful words - all of us and always remember them! Pestel saw the new Russia as an indivisible republic with a strong centralized power. The federal state structure was rejected by him on the simple grounds that

"The private good of the region" is not so important as the "good of the whole state" ...
Pestel considered the people's veche of the Novgorod Republic to be an example of democratic rule in the renewed Russia. But since it was clearly impossible to gather veche from all over Russia, he proposed the division of Russia into regions, provinces, uyezds and volosts, in which all adult male citizens from the age of 20 would have the right to vote and participate in annual "popular meetings", electing delegates for representation at a higher level of management.

It was assumed that all citizens would have the right to elect and be elected to any government bodies on the basis of not direct, but two-stage elections. First, the volost people's assembly elects deputies to the county and provincial assemblies, and already representatives - to the "very top". The supreme legislative body of the new Russia should have become the People's Chamber, elected for a five-year term. Only it would pass laws, declare war and make peace. Nobody could dissolve it. Accordingly, Pestel's supreme executive body was the Sovereign Duma of five people, which was also elected for five years from the deputies of the People's Veche.

Power, Pestel believed, needs to be controlled. Therefore, so that both the People's Chamber and the Sovereign Duma would not go beyond the legal framework, he invented a control body - the Supreme Council, which consisted of 120 "boyars" who were to be elected to their office for life.

Pestel also had an extremely negative attitude to serfdom:

Possessing other people is a shameful thing ... contrary to natural laws ... Slavery in Russia must be resolutely abolished ...

The peasants, in his opinion, should have been freed by giving them land and all the rights of citizenship had to be assigned to them. The military settlements had to be destroyed (apparently, the nobles did not like them very much, if this demand fell into even such a serious program), and all the land allotted for them, again, should be given to the peasants for free land use. Moreover, the land in the state should have been divided into "public land" belonging to the volost community, which could not be sold under any circumstances, and "private land". Public land was divided into plots and issued to members of the rural municipality for use for a period of exactly one year, and then either remained with the same person, or transferred to someone who could dispose of it better.

Private lands will belong to the treasury or to individuals who have these with complete freedom ... These lands, being intended for the formation of private property, will serve to deliver abundance.

This is how Pestel thought in no other way, and I must say that all his proposals were quite reasonable and quite easy to implement.

Pestel also proposed a new taxation system designed to fully support entrepreneurship. All payments in kind, in his opinion, should have been replaced by collected money. Taxes should have

levy from the property of citizens, and not from the persons thereof.
Russkaya Pravda also resolved the national question, which has always been acute in Russia. According to Pestel, only strong nations, capable of single-handedly resisting foreign invaders, have independence. For small nations it is both better and more useful if

they will unite in spirit and society with a large state and completely merge their nationality with the nationality of the ruling people ...

But he also emphasized that people, regardless of their racial and national nature, are equal to each other by nature, as a result of which a great people, subjugating small ones, cannot and in no way should use its superiority in order to oppress them.

It is interesting that the Southern society openly recognized the army as its support and saw in it the decisive force of the revolutionary coup. The members of the Society planned to seize power in the capital, after which the tsar should be forced to abdicate. In accordance with the new goals, the organization of the Society also changed: now only military men were admitted to it, discipline within the Society was tightened; and all its members were to obey the Directory, the elected governing center, unconditionally.

But it was mainly Pestel who set the tone in the Society. Decembrist N.V. Basargin later recalled that Pestel took the lead in all the debates:

In Northern society, there was no such harsh dictate. All questions were discussed at the table at lunches at N. Muravyov's or at breakfasts at Ryleev's, that is, pleasant was combined with useful. There were both moderates and radicals. The former supported Muravyov's "Constitution", while the radicals, including Ryleev, the Bestuzhev brothers, Obolensky, Pushchin and a number of other conspirators, were inspired by Pestel's "Russian Truth". There was a lot of controversy, but very little strict discipline. The main role in the Society was played by K. Ryleev. He knew how to convince people and thus attracted more and more "free-thinkers" to him.

Both societies maintained secret relations with each other, and in the spring of 1824 Pestel personally went to St. Petersburg and there tried to agree on their unification into one organization. However, the "northerners" did not like many of the provisions of Russkaya Pravda. Despite this, it was possible to agree on the main thing - a simultaneous performance both in the north and in the south in the summer of 1826.

The plans of the revolutionaries were not destined to come true. The interregnum situation prompted active members of the Northern Society to decide on an immediate performance in the capital. The northerners had to act in isolation from their southern associates. The defeat of the uprising on Senate Square and the performance of the Chernigov regiment in the south put an end to the Decembrist organizations. The foundations of the liberation struggle worked out by the Decembrists, constitutional projects and organizational experience played a significant role in the education of subsequent generations of fighters against the autocracy.

As for the “Constitution” of H.M. Muravyov, it was written on the basis of Western European, American and Russian legislative documents, and the last of its versions was written on January 13, 1826 (that is, after the defeat of the uprising) at the request of the Investigative Committee in the casemate of the Peter and Paul Fortress.

In the introduction to it, Muravyov stated the following:

The Russian people, free and independent, are not and cannot be the property of any person or family. The source of the supreme power is the people, who have the exclusive right to make basic decisions for themselves.

The future Russia, Muravyov believed, should be a federal state, consisting of large administrative units - in the last version called "provinces", and the right to independently decide all its internal affairs.

The supreme legislative body of power should have become the People's Chamber, which resembles in its organization and functions the Congress of the United States of America and consists of two chambers: the House of Representative and the Supreme Duma. The first expresses the will of the entire people, the second - of individual administrative units. The highest executive power in the renewed Russia was to belong to the emperor, as before, and this "knowledge" was still established by hereditary. But the emperor, according to Muravyov, was supposed to become "the supreme official of the Russian government," and by no means an autocrat, and his functions were akin to those of the American president.

Freedom of speech and press was proclaimed:

Everyone has the right to express his thoughts and feelings unrestrainedly and communicate them through the press to his compatriots.
... freedom of religion, full equality of all citizens in the face of the law, personal inviolability, sacred property rights and, most importantly, a jury. Muravyov's judicial system was borrowed from the British.

As for serfdom, the Constitution of Muravyov said directly:

A slave who touches the Russian land becomes free ...

But the ants were not going to take away the land from either the landowners or the Church. The villagers, that is, the peasants, were supposed to allocate land plots in the amount of two dessiatines for each peasant household. But they received the right to buy land in hereditary ownership. So, if someone lacked land, he could easily buy it. And money? Take money on credit!

Such were the programs for tsarist Russia among the Decembrists of the north and south of Russia. But in order to put them into practice, the most important thing was required - to take power into our own hands. And it went to that. But, as always, His Majesty Chance intervened in human plans!