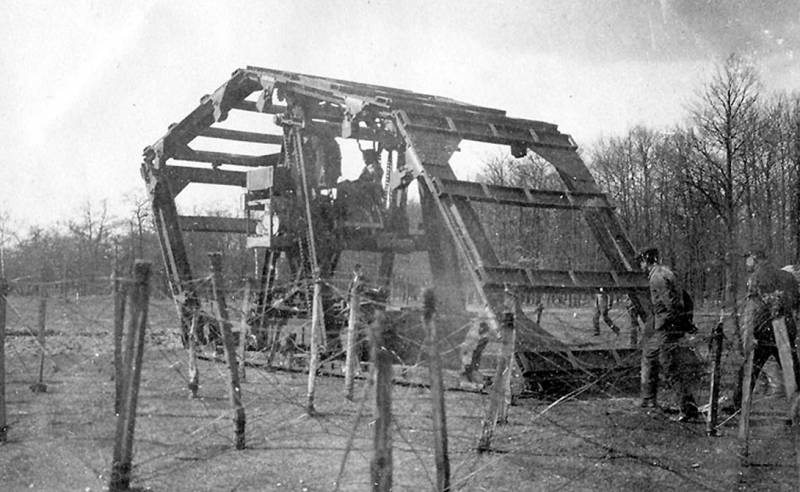 "Prepare for war,
Excite the brave;
let them perform
all the warriors will rise.
Beat plowshares into swords
And your sickles - for spears;
Let the weak say: "I am strong."
(Joel 3,9-10)
Tanks of the world. Not so long ago, VO published material about ... the French Renault tank, and it stated that it was the French who inspired the British to create the first tank, well, a lot of interesting things were written there ... except what really should have been written. And it should have been written that yes, indeed, it was they, the French, who began to build the first machines for action on the battlefield in the First World War, but they could only inspire their "tanks" for something and only randomly, so they were technically imperfect. And this is really so, because the very first "tank" made in metal by them, the purpose of which was to tear the barbed wire barriers and pave the way for their troops, did not resemble a tank at all! And yes, this “device” was built in France, and it was called “Boirot's machine”. Moreover, it was possible to build it in two versions, and both of them rightfully deserve the name of the most unusual combat vehicles of that time.

As soon as the maneuvering period of the First World War was over, the French soldiers had to immediately face barbed wire obstacles, which they had to somehow overcome! 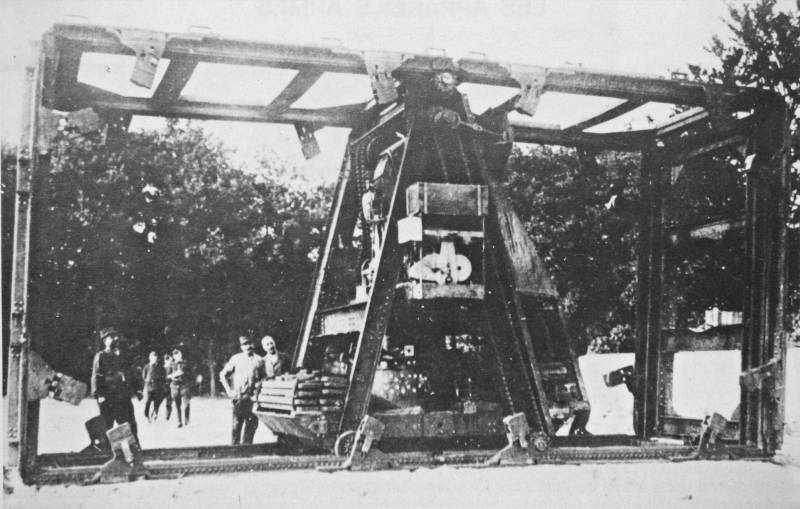 Here it is in all its glory - truly "great and truly terrible"! Photo Landships.info

Cutting them with special scissors was first of all dangerous. Bursting with shells is too expensive and irrational. And it was here that the engineer M. Boirot decided to say his word, the first car of which was tested on the ground in December 1914. To anyone who saw it, it seemed, probably, something monstrous, since it was an eight-meter frame, consisting of six flat plates connected by hinges. Inside it, the designer placed a kind of pyramidal-shaped cabin, in which there was a motor with a capacity of only 80 hp. and space was provided for two crew members. The cabin had wheels and could slowly roll along the rails inside the frame, while huge plates, like caterpillar tracks, “paved” the road in front of this monster.

But in the diagram, the crawler looks ridiculous, but not scary! Photo Landships.info
That is, the plates alternately fell from above to the ground and ... with their weight they tore and pressed the wire barriers into the ground, but the infantry could walk quite freely behind the vehicle. And since her weight was 30 tons, and besides, the dimensions were also appropriate, then she could lay the road through the most multi-row barriers. Only her speed was only 3 km / h! Moreover, she absolutely could not turn! In addition, it was also just a wonderful target for enemy artillery. Therefore, immediately after the tests, it was abandoned. 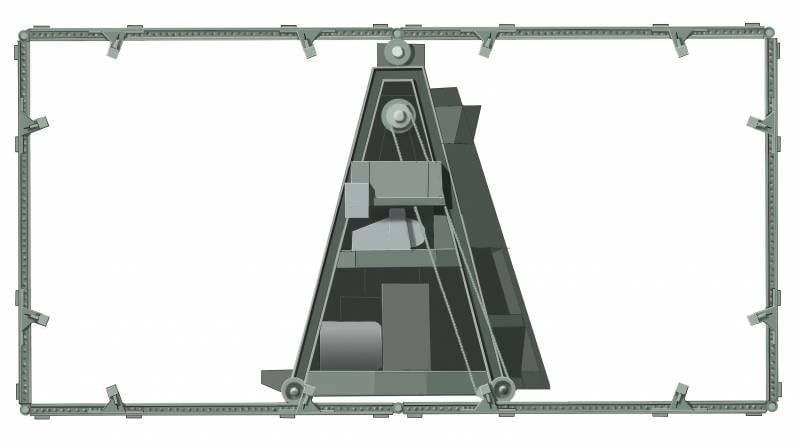 I had to come up with something like that ... Photo Landships.info

Boirot, however, did not lose heart, and immediately offered the military a more compact version with an armored hull, smaller in size, which now could not only tear barbed wire, but also force trenches six feet wide. But ... a speed of only 1 km / h, as well as a turning radius of 100 meters, did not leave her the slightest chance to be adopted. By the way, it is not at all clear how she did it, and what kind of mechanism was on her. 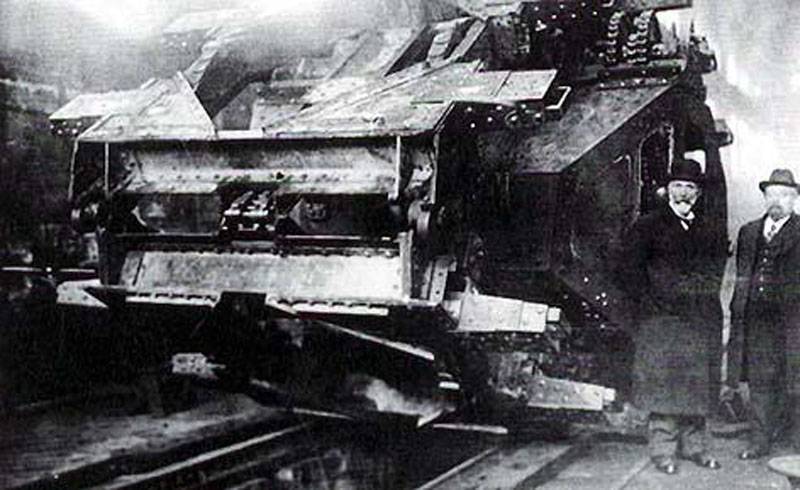 "Boirot No. 2". The car has become smaller, more compact, but, perhaps, it looks even worse ... Photo Landships.info 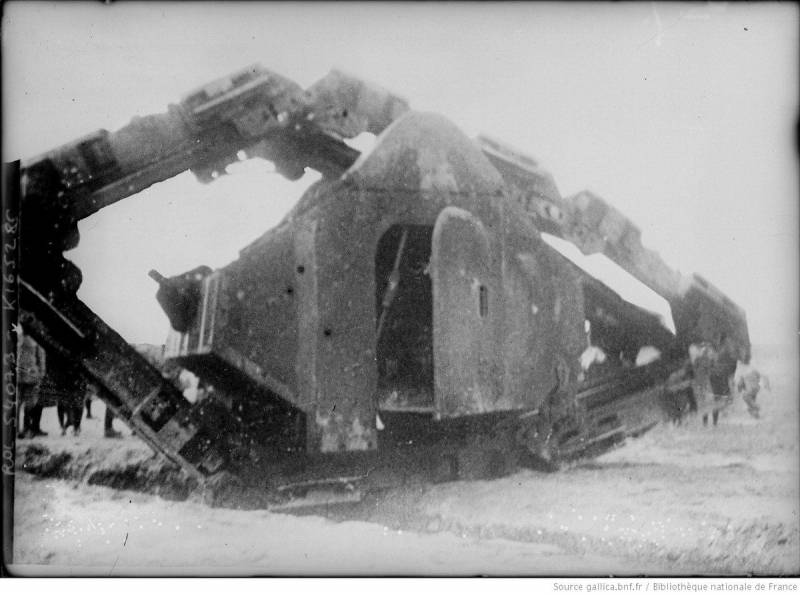 And this is it during tests on the ground. Photo Landships.info
But since she at least somehow turned, it means that there was something “turning” on her after all. And this time, the designer even suggested installing in its doors, on the right and left sides, armament from two machine guns, for which he increased the crew of the "car" to 3 people. But even in such an armed and improved form, she "did not go"! 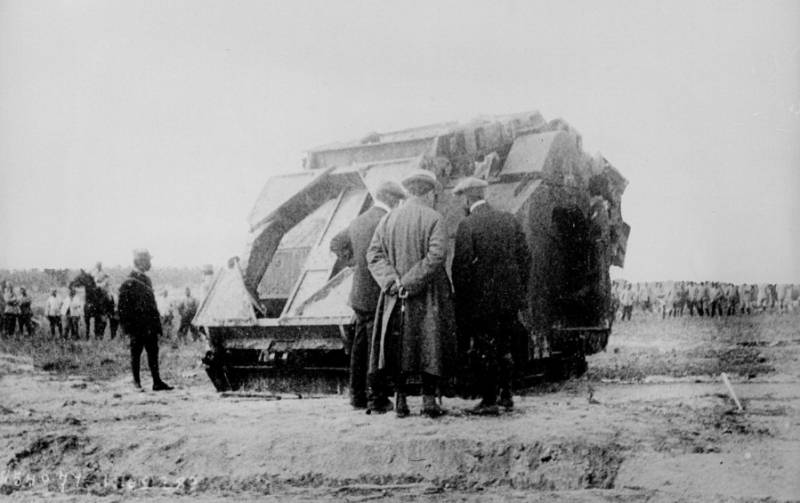 Probably, they are also perplexed - where is her steering wheel? Photo Landships.info

"Breto-Preto" - win with a cutter and machine gun

Another French engineer, DL Breteau, learned about the failure of the "Boirot machines", and Boirot's ideas inspired him to create his own version of a machine for overcoming wire obstacles. Only now he decided not to crush them, but to cut them with a special mechanical cutter, which was a vertical saw with a mechanical drive. The sample for testing was taken by the company "Preto", which is why this new device received a double name: "Breto-Preto". In its finished form, it was a five-ton armored wheeled tractor armed with a Hotchkiss machine gun in a small turret.

Breto device. The teeth themselves were motionless and served only to grip the wire, and they were cut by a special chain, arranged according to the principle of a modern chainsaw
Tests of 10 such "tractors" at once began to be carried out on August 22, 1915. It turned out that ... the whole car was unsuccessful. Then in September it was decided to install the Boirot device on the Renault M.1915 armored car, and due to the added weight, the machine gun turret had to be removed. But even with this car, nothing good happened. And then they decided to use the Jeffrey Quad tracked tractor, supplied to France from the United States and used by the French army as a towing vehicle for heavy guns. However, its chassis with the "lunar relief" on the battlefield did not cope. He was stuck in a trench, from where he was barely pulled out. The third design, based on the Baby Holt tractor, had a body made of special boiler steel and entered trials in December 1915. They did not even put the Breto cutter on it, but first of all tried to find out the level of its passability. The fully armored Baby Holt was planned to be armed with two Hotchkiss machine guns - one in the nose to the right along the course, and the other in the turret mounted on the hull. Now this already at least somehow looked like a tank, and the experience of working on this vehicle was to some extent reflected in the design of the Schneider SA.1 tank.

Chainsaw on a tractor wheeled chassis

Then two more French engineers Paul Aubriot and Gustave Gabet, all in the same 1915 on the chassis of an agricultural tractor "Filtz", built a strange, very strange combat vehicle, somewhat similar to an armored tower with two front tractor wheels of large diameter, which were leading ... Armament - 37 mm rapid-fire cannon. The crew consisted of two people: the driver and the commander, who was both the gunner, that is, the gunner and the loader. But the most unusual thing about its design, apart from its appearance, was the propulsion system, which they used as an electric motor, which was powered by a cable that was pulled behind this "tractor". 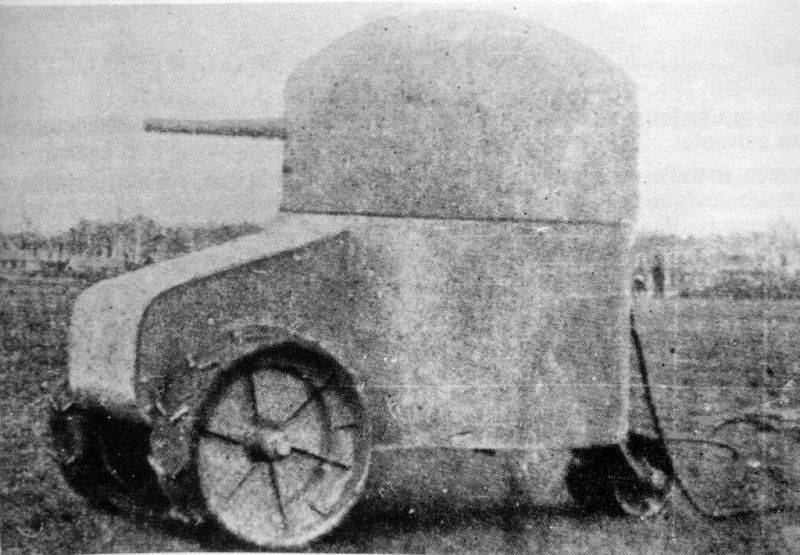 "Fortress" - Gabe and Aubrio's car. Photo from the book "Dawn of Glory"
Inside, this "tank" had no batteries, no electric generator - nothing! But there was a cable that was unwound from a special reel. And already either a mobile or a stationary current source was connected to it! Of course, the combat vehicle, behind which the "tail" is dragged out of the cable, was declared completely unsuitable for the army. And the good news is that both designers understood this and proposed an improved version, which had a gasoline-electric propulsion system in the body and, in addition, tracked. The vehicle had a length of 6 m, a width of 2,5 m, a height of 2 m, and a combat weight of 8-10 tons. In August 1915, the military ordered the designers of 10 of these "tanks" for testing. But the engine is only 45 hp. turned out to be too weak. Therefore, this car did not develop the declared speed. 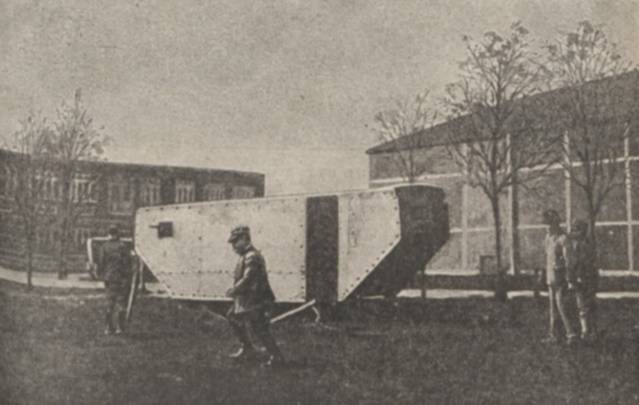 Fighting vehicle P. Froth. As you can see, then they built everything in a row, without even thinking about whether it would work at all.
Photo Landships.info

Well, in March, again in 1915, engineer P. Froth, who worked for the Severny Canal company, also proposed a "combat vehicle" similar to ... "push-pull". She weighed 10 tons, had two control posts and could move back and forth on the battlefield without even turning around. It had to press the barbed wire barriers due to the shape of the body and the wheels on which this wire would fall. 20 hp engine was in the center of the case. The crew of 9 people included four machine gunners and three of their assistants. The speed of the car was only 3-5 km / h, and besides, it turned out that it actually could not move on rough terrain.

On the battlefield, she was completely helpless ... Photo Landships.info
This, in fact, is all the achievements of French engineering, which in 1915 could at least somehow inspire the British ... 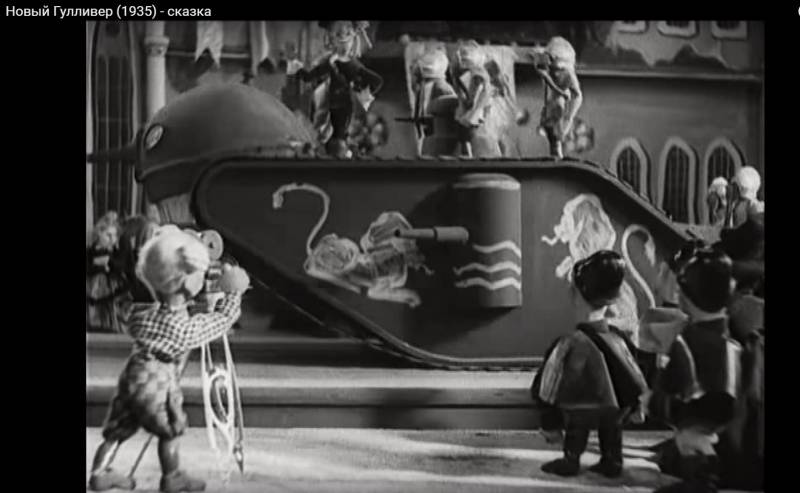 As a result, such diamond-shaped vehicles entered the battlefield, which became the first tanks in the world! Still from the film "New Gulliver" (1935)
You, dear VO readers, can read more about all the above-mentioned machines, again, on our pages in the materials of past years:
Experimental engineering machine Appareil Boirault №2 (France)
Projects of articulated tanks Boirault Train Blindé (France)
Armored car Frot-Laffly (France)

PS The site administration and the author would like to express deep gratitude to A. Sheps for the illustrations for the article.