The most famous sapper blade 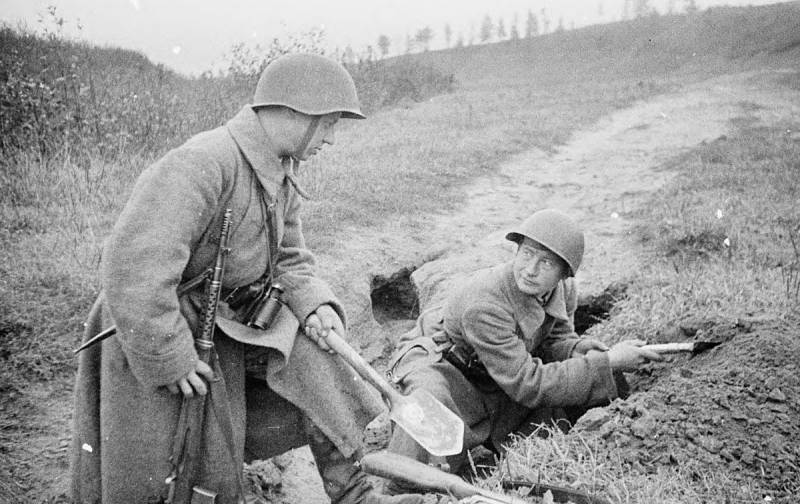 The shovel was invented by man even before the emergence of all monotheistic religions, история This entrenching tool is thousands of years old. In ancient times, the tray, bayonet or blade of a shovel was made from bones or wood, then they began to sheathe and bind with iron, and only then came to all-metal options.


Throughout history, shovels were used by the military to equip fortifications and engineering work, but they entered the outfit of every serviceman relatively recently, only in the final quarter of the XNUMXth century.

One of the most famous and famous all over the world is the Russian sapper shovel. The sapper blade is a vernacular that has become widespread and is very often used in written and oral speech, the meaning is non-statutory. The official name is the small infantry shovel. For a long time, the Linnemann small infantry shovel, also known as MPL-50, was in service with the Russian imperial army, and then the Soviet one.

The father of the small infantry shovel in the form in which it existed and has existed for all recent decades is the Danish officer and inventor Mads Linnemann. The Dane received a patent for his invention in 1870. He has been working on new engineering weapons for a serviceman for several years. 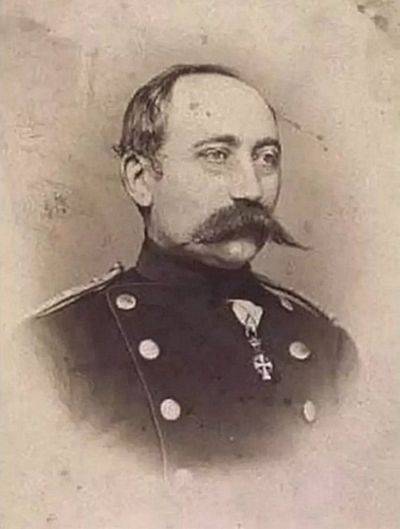 Inventor of the small infantry shovel, Mads Linnemann
Thus, Captain Linnemann received the first patent for a universal entrenching tool back in 1869. Initially, the inventor proposed to supply the personnel of the Danish infantry with a tool that combined a shovel, knife, saw and pan for cooking at the same time. But at that time, the Danish army abandoned the advanced version, preferring the simplified version, which was adopted in 1870 under the designation Den Linnemannske Spade (M.1870). The designers will return to the issue of the multifunctionality of the small infantry shovel in the XNUMXth century.

The invention of the small infantry shovel initially did not bring significant material benefits to Linnemann. The Danish army was small, so orders for a shovel were few. In an effort to monetize his invention, Linnemann opened the production of such shovels in Austria-Hungary in 1871, realizing that the Austrian army was much more numerous. 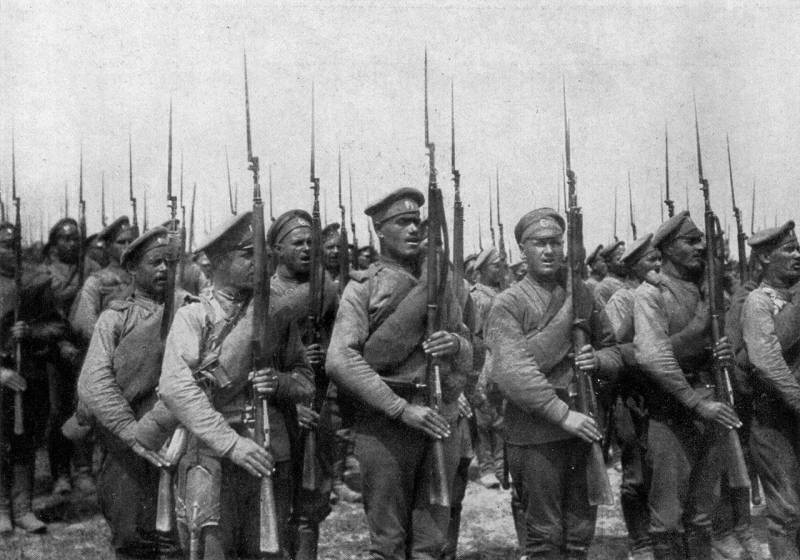 In the foreground, a soldier of the Russian Imperial Army with a Linnemann shovel
After success in the armies of Denmark and Austria-Hungary, the shovel became interested in France, Prussia and Russia. At the same time, the Russian Empire recognized the copyright for the invention for Mads Linnemann and bought them for 60 thousand rubles, ordering also the production of 30 thousand shovels. At that time, the amount of the transaction was quite large. From the late 1870s to the present day, Linnemenn's shovel has undergone almost no changes, only the materials from which the shank and bayonet were made have changed.

Today, the MPL-50 shovel and its numerous analogues can be easily purchased on the Internet. The famous sapper blade is widespread not only in the countries of the former USSR and in Europe, but also overseas. It is often bought by tourists, motorists and ordinary citizens as an entrenching tool in a subsidiary farm, as well as reenactors.

A small infantry shovel, also known as MPL-50 or Linnemann's shovel, was a portable or portable trench tool for the lower ranks of the army of the Russian Empire, and then the rank and file of the Red Army and the Armed Forces of the USSR. The length of the small infantry shovel was 50 cm, which is reflected in its name. 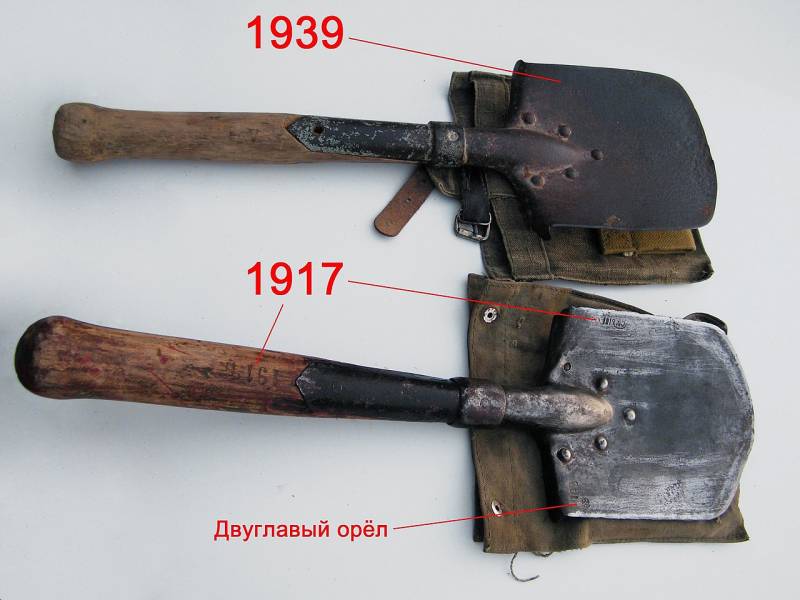 A small infantry shovel is designed for self-entrenching soldiers, tearing off a single trench or a rifle cell under enemy fire. The sapper blade is the main engineering weapon of a serviceman. In each infantry company of the Russian Imperial Army in the state, there were 80 small infantry shovels, as well as 20 axes.

In addition to engineering functions, the shovel could be used as weapons in hand-to-hand combat, as well as for cutting branches and bushes, as a knife or as a paddle. Standard dimensions allow you to use a shovel for measurements: two shovel lengths - a meter. The shovel can also be used as a throwing weapon. Videos on the Internet with training of both military personnel and simply civilians with the MPL-50 traditionally gain many views all over the world.

Adopted by almost all the armies of the world, the small infantry shovel was able to influence the entire art of war. Each fighter on the battlefield received his own engineering weapons - MPL in a fabric cover. This allowed the soldier to quickly prepare at least some kind of shelter in the ground in order to protect himself from enemy fire. 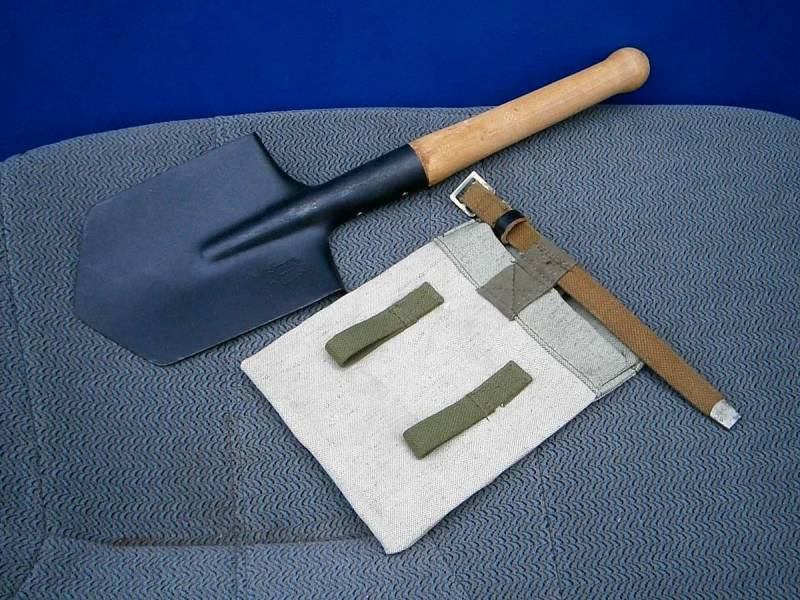 MPL-50 with cover
Servicemen with good physical fitness and trained in the techniques of working with MPL are able to prepare a trench for firing from a prone position in about 8-12 minutes. In accordance with the standards adopted in the Red Army, an infantryman for an hour of MPL operation had to dig 1/3 cubic meters in clay soil, 1/2 cubic meters in medium vegetation soil and 3/4 cubic meters in sandy soil.

Both lower sides of the MPL steel tray are sharpened, the handle was made of various hard wood species, no paint was applied to the handle. The standard dimensions of the MPL of the Russian Imperial Army and the Red Army were: the length of the tray - about 200 mm (in the USSR Armed Forces - about 180 mm), the width of the steel tray - about 150 mm, the total length of the shovel with the handle - 500 mm. Small shovels of the imperial army and the red army also had crimp rings. Post-war shovels MPL-50 did not have a crimp ring.

Evolution of the small infantry shovel

Small infantry shovels began to evolve as early as the 1938th century. Then a number of countries switched to folding options. The folding shovel was adopted by the Wehrmacht in 90, and during the war years, folding shovels were used by British soldiers. The Wehrmacht shovel could be turned into a hoe by attaching the shovel bayonet at a XNUMX degree angle to the handle. 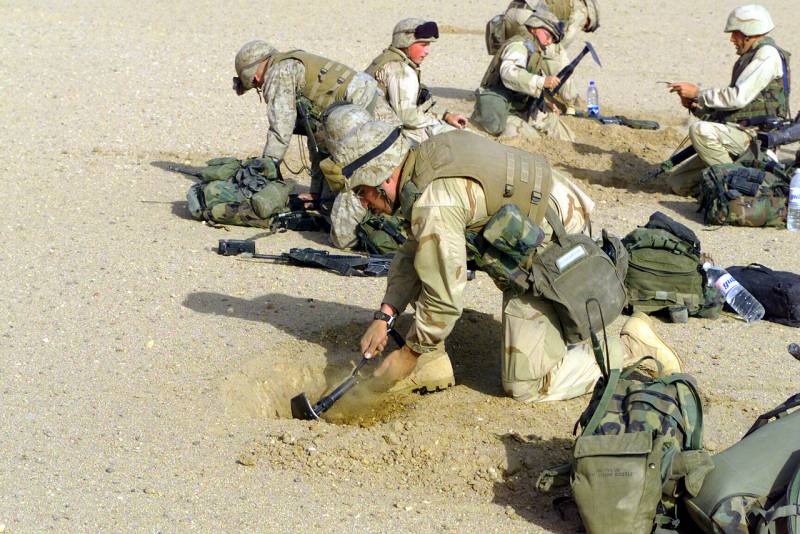 Self-Burrowing Training for US Marines
At the same time, the German fighters assessed their entrenching tool ambiguously and did not hesitate to use the Soviet MPL, which were more convenient to operate, if possible. The weak point of the German shovels was the mount, which could become loose, and the tool began to play. At the same time, the Soviet MPL was as simple as possible, it could be easily pulled up or squeezed right in the trench, no special repair was required for such a shovel.

Today, the Bundeswehr, the US Army and many other NATO armies still use collapsible shovels. The shovels fold into three positions, have a D-shaped plastic or aluminum handle and a plastic or polyester cover. They can also be used as hoes. Also, one side of the bayonet blade is a saw. The shovels can be attached to a belt or backpack. They, like the traditional MPL-50, can become an irreplaceable item in the trunk of your car. 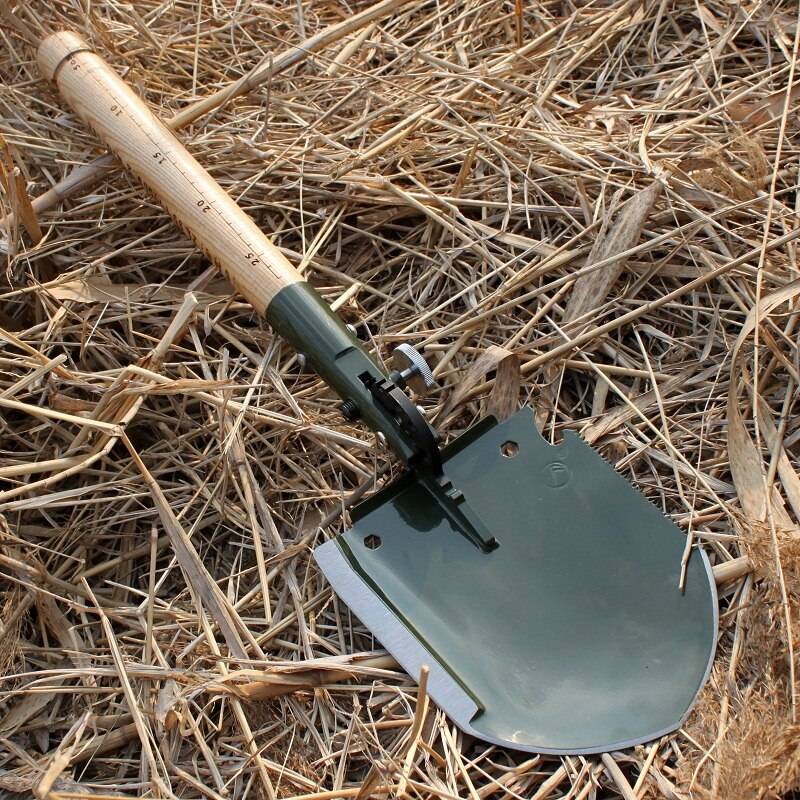 Chinese army shovel WJQ-308
They followed the same path in China. Today, anyone can purchase the WJQ-308 Chinese folding military shovel. This sapper blade is also easy to turn into a pick or a hoe, one side of the bayonet blade is sharpened, the other has teeth, which allows you to use the shovel as a saw. In addition, there is a bottle opener on the bayonet of the shovel, which can also be used as a can opener.

The main disadvantage of all improved options is the complexity of the design, the appearance of movable joints, as well as the increase in cost. If the classic MPL-50 shovel, which is almost impossible to "kill" and very easy to repair, can be bought for less than a thousand rubles, then modern sapper blades of the Bundeswehr or the PLA will cost you 3-4 thousand rubles.

Ctrl Enter
Noticed oshЫbku Highlight text and press. Ctrl + Enter
We are
Russian bayonetThree hundred years they are the first on the battlefield
Military Reviewin Yandex News
Military Reviewin Google News
48 comments
Information
Dear reader, to leave comments on the publication, you must sign in.