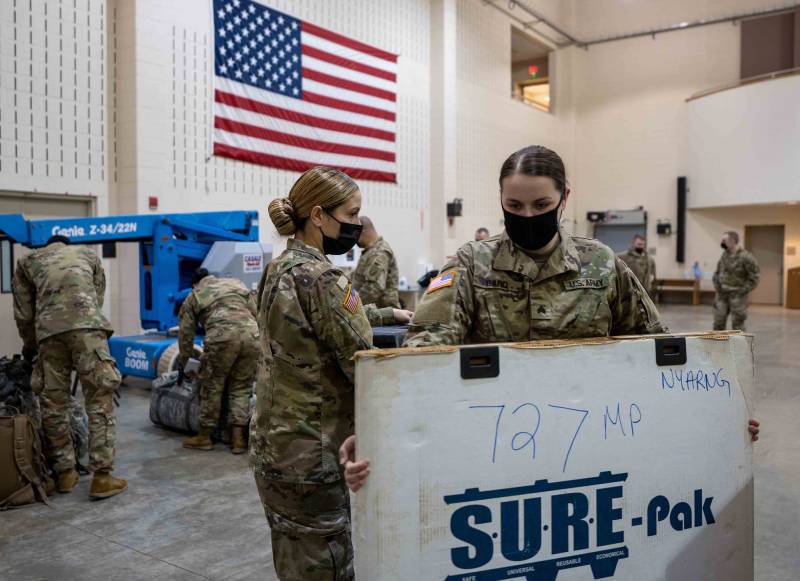 In Washington, the formation of a consolidated detachment of the US National Guard from military personnel and reservists, who represent all 50 American states, is being completed. Recall that Brigadier General Janine Birkhead from Maryland has been assigned to command this 25-strong contingent.


As it turns out, the National Guards from Alaska have the biggest problems getting to Washington. From this state, to guard the Capitol (during the inauguration of Joe Biden), a company of about 80 National Guard troops should have been sent a week ago. But problems arose.

In relation to candidates, the Federal Bureau of Investigation (FBI) arranged a multi-stage check, including checking the biography of not only the military personnel themselves, but also their close relatives. It is noted that the accounts of social networks of relatives and friends of the Alaskan National Guardsmen were subjected to a thorough analysis to determine whether any of them approved the actions to storm the Capitol on January 6, 2020, whether they expressed support for those whom Congress managed to name " internal terrorists. "

Our soldiers are ready to answer the challenge to the state. We have always been ready for this and are now ready to serve the country in difficult times.
These words give reason to say that the general is somehow especially zealous trying to emphasize loyalty, as if someone in the command expresses doubt about this.

As a result, the inspection of the National Guards in Alaska dragged on. The flight was postponed to Sunday (January 17), however, it did not take place on that day either. According to official data, the reason for the transfer of the departure of military personnel from Anchorage to the Anrus base (southeast of the US capital, from there the fighters are to be sent by road to the District of Columbia) was the revealed technical malfunction of the board, which the National Guards were supposed to deliver to the east of the United States. Moreover, it turned out (based on statements by the press service of the National Guard of the State of Alaska) that they decided to use the converted aviation a KC-135 tanker of the 168th Air Wing.

Departure was postponed to Monday. But it did not take place on Monday either. It was stated that bad weather was the reason.

In connection with the delay in the transfer of National Guard troops from Alaska, the local population began to have suspicions that the FBI was still afraid of stationing Alaskan soldiers and officers in Washington. The Americans found the situation strange.

Strange situation. Now they are checked longer than others, then a strange choice of aircraft, then statements about a malfunction, now - the weather.
Will they delay the shipment until the last?
Earlier it was reported that the US intelligence services have concerns about the American military due to the fact that they allegedly can support the protesters. And on January 20, we recall, those who disagree with the election results and believe that their votes were stolen are planning to hold their march in Washington.

Ctrl Enter
Noticed oshЫbku Highlight text and press. Ctrl + Enter
We are
The US blogosphere explained the appointment of General Janine Birkhead to the post of commander of the National Guard forces in the CapitolReports from the militia of New Russia for 27-28 September 2014 of the year
Military Reviewin Yandex News
Military Reviewin Google News
41 comment
Information
Dear reader, to leave comments on the publication, you must sign in.