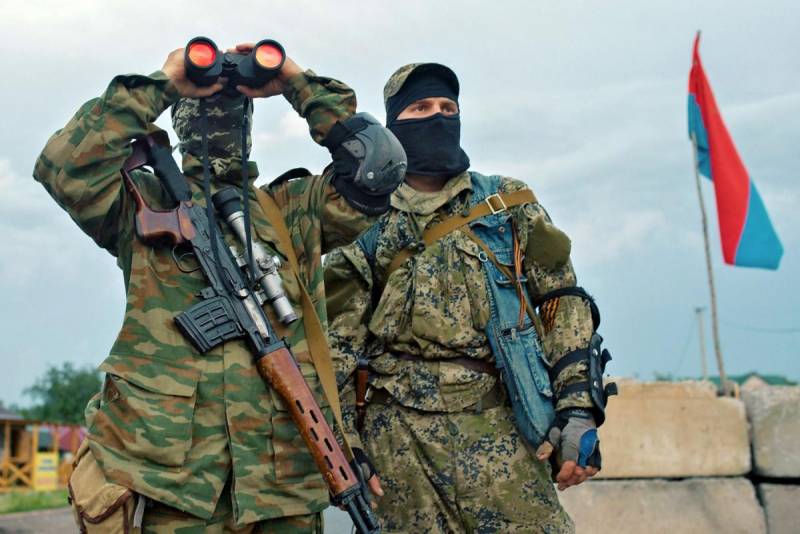 There is a popular opinion among network patriots that the Armed Forces of Ukraine shoot militias with impunity, and the command of the NM LPR sends those who give an answer to the enemy to prisons.

A similar opinion appeared back in 2016, when the active phase of hostilities ended, and the recent militias, who still remember how they digested the Ukrainian military in boilers, were forced by the command to refrain from reacting to constant shelling. The politicians needed a demonstration of the implementation of the Minsk agreements (even if unilaterally), so any activity of the People's Militia required coordination with the command, and for "initiative" one could seriously suffer.

Of course, on the ground, this often turned into sheer stupidity. For example, they tried to bring the author's colleague to justice after he came across a Ukrainian DRG in his own trench and, having had time to react first, put the Ukrainians in place. Fortunately, the soldier managed to defend, and he calmly returned to service.

Against the background of very real events, as usual, a network mythology soon appeared, generated by the inquisitive minds of people living in the comfort of social networks and knowing about the situation on the line of demarcation only by hearsay.

As a result, the ardent patriots decided by 2017: the Ukrainian Armed Forces systematically kills the unrequited defenders of Donbass, whom the criminal command and Putin personally sends to the front line to die.

The formula turned out to be very tenacious, as it relied in part on a real ban on return fire from heavy weapons. In addition, it pleasantly stimulated the imagination of couch patriots who were in vain awaiting the "drain" of the LPNR.


Of course, the statistics published by both sides of the conflict do not stand up to scrutiny.

So, at the beginning of this year, the Ukrainian General Staff cheerfully reported:

“In 2020, the militants of the illegal gangs of the LPNR lost almost 390 soldiers irretrievably, over 600 were injured and wounded. Also over the past year, more than fifty enemy military equipment and weapons were destroyed. "
It is clear that there is no trust in these figures (surpassing even the bloodthirsty fantasies of Strelkov-Girkin).

At the same time, for the sake of fairness, it should be noted that the LPNR operates with no less large numbers. So, on July 1, 2020, the People's Militia Directorate of the DPR stated that in the first half of the year, the enemy's losses amounted to 216 servicemen of the Armed Forces of Ukraine irrevocably and 602 wounded.

The recent report of the Ukrainian General Staff on losses looks much more reliable, according to which, in 2020, the Ukrainian Armed Forces lost 50 people in battle, and non-combat losses amounted to 79 people; 339 servicemen were injured.

It is clear that the figures are considerably underestimated. Which is not surprising. In Kiev, they still claim that the total losses of the Armed Forces of Ukraine in Donbass are only 2 people. Although this figure corresponds, rather, to the losses in the Izvarinsky cauldron (no one can know the exact figure - when the Ukrainian side refused to take their 665s, they had to be buried without count in mass graves and "kopankas").

However, at the moment, it is not the exact figure (which is still impossible to find out) that is more important, but the fact itself - Ukraine admitted that it had lost half a hundred people in battle in a year. This means that the People's Militia is not so toothless and unrequited.

Everything, as they say, is not so unambiguous - despite the current ban on opening fire on the Armed Forces of Ukraine with heavy weapons, as well as all the distortions on the ground (you never know fools among commanders of all levels?), The People's Militia of the LDNR regularly "pleases" the enemy, suppressing fire activity, destroying DRGs and thwarting attempts to gain a foothold in the gray zone.

Of course, at the same time destroys the enemy and suffers losses herself. Moreover, on the ground, fighters often try to "treat" the Armed Forces of Ukraine in excess of the agreed norm or as a personal initiative. Yes, the "response" is not given to the extent that we would like - in an amicable way, it would be worth long ago to teach Kiev to literally fulfill the clause of the ceasefire agreements.

However, the nightmare that vultures portray on social networks is no, never was, and never will be.

It is worth recognizing that the spread of malicious and panic rumors is largely to blame for the command, which sometimes arranged demonstrative flogging to commanders who "dared" to respond with a blow to blow, and in public statements, and only in recent months, it began to be mentioned that provocations of the Armed Forces of Ukraine should responsiveness.

Before that, all the statements sounded like a monologue of a rape victim, which had a disastrous effect on the number of people wishing to join the NM LPR and on the morale of the personnel.

However, the spokesmen of the command can try to excuse their flaws due to inexperience.

But those who deliberately spread alarmist nonsense - there is no forgiveness.

Ctrl Enter
Noticed oshЫbku Highlight text and press. Ctrl + Enter
We are
Situational analysis of the death of the MH17 flight (Malaysian Boeing 777), made on the basis of engineering analysis from 15.08.2014Results of the week. “In our cooperative, the board is always agreed”
Military Reviewin Yandex News
Military Reviewin Google News
29 comments
Information
Dear reader, to leave comments on the publication, you must sign in.