So who organized the capture of the Capitol - the Russians, the Chinese or the Iranians ... 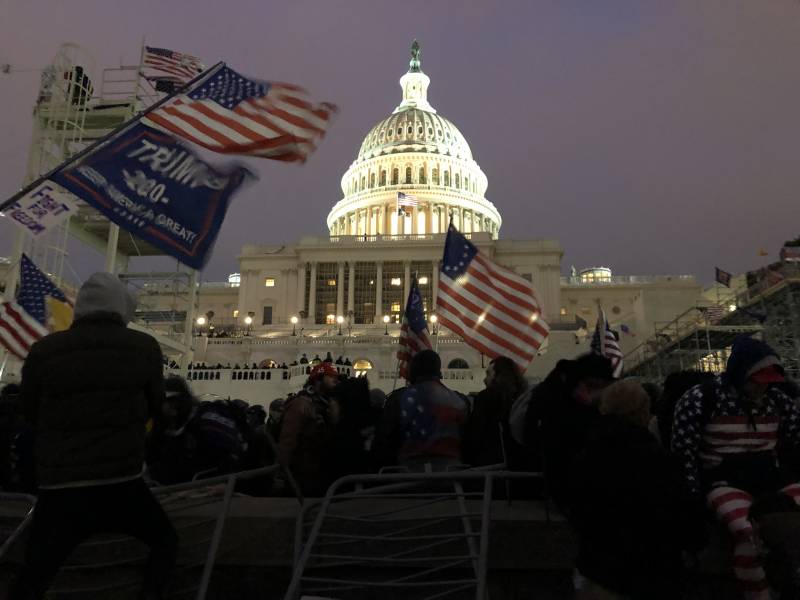 When I raised the topic of this material in a conversation with one of my acquaintances, a person with humor and always "square answers" to any questions - by square I mean the presence of sharp corners that can be hit painfully, his answer was quite predictable:

Well, thank God, otherwise I even began to get upset that our people missed such fun in America.
Indeed, here I understand my friend, the American special services have been swinging for a long time. It's as simple as that. We saw a man with Asian features on the video from CCTV cameras - here's the hand of Beijing. If facial features are similar to Arab - why not an Iranian spy or saboteur?

The truth is more complicated with the Russians. Here with simple facial features will not work. In the United States, there are so many citizens from different "white" nations that they might not believe it. And Russians are not always European in appearance. In general, we have a variety, as once in the ark of Noah. But it is impossible without Russia.

Simply because Hollywood didn't create the image of America's enemy for nothing. A Russian, a little less Chinese, and a wild Iranian, who is only looking for where to enter with a bomb on his chest. I immediately remembered the catch phrase of Russian Foreign Minister Sergei Lavrov about morons ...

Wash your shoulder, swing your hand

I will start unexpectedly for some readers. Why was I so sure that in the near future Russian, Chinese or Iranian traces will begin to appear in the events in Washington? This is necessary to explain the numerous violations of the law by the US authorities.

This is to explain the tightening of restrictions on free speech in the United States. Finally, this is necessary to explain the large number of criminal cases that will soon be opened, and on which it will be judged just about those who participated in the attack on the Capitol.

Unauthorized entry to the Capitol? Laptop theft? Destruction of some material assets? Small enough to organize a nationwide "tightening the screws". And the terms for which the guilty will be sentenced will not frighten the people. It is another matter if to these fairly light articles we add accusations of treason, terrorism, and separatism.

I am sure that the unwinding of the state mechanism of terror against dissent is just beginning. The number of criminal cases will grow. The US expects at least a year of "great terror". Most likely, they will not shoot people, but long terms for many are a very real prospect.

The prospect is rather unpleasant, but the new president and the new administration will simply not be able to avoid such a turn of events. Either the new government suppresses its opponents using "legal" methods, or else - using the punitive organs of the state.

Or those millions of dissenting people that are now in the United States are turning into tens of thousands or even hundreds of thousands of radicals, ready to take forceful actions against Biden or the one who will become president after his sudden departure for health reasons or for other reasons.

I understand perfectly well that millions will not come out to fight the authorities. For the most part, these are completely peaceful people who firmly believed in American democracy. In the end, most of these people will humble themselves and humbly await the next election. But the active part, those same tens, maybe hundreds of thousands of radical minded, will remain. They will remain with the belief that democracy in the United States is dead, and their task is precisely to revive democracy.

The authorities need a Russian, Chinese or Iranian trace in order, among other things, to explain the existence of these very radicals in the United States. Will we, Beijing or Tehran, be able to withstand these accusations? Unfortunately no. The highly-proven technology will be used "Highly Likely". "Most likely" would mean "it is." Thanks to Theresa May for the great and comprehensive proof!

Enemy spies are everywhere, but especially a lot of Russians

History about a Russian trace in the organization of the attack on the Capitol should have appeared simultaneously with measures to restrict freedom of speech. The technology of intimidating the population by threats of transmitting information via social media. the network has been tested in many countries.

This phenomenon is actually used to organize riots. The "headquarters" is out of the reach of the special services, and the executors usually work only at reception. Which makes searches useless for specialists. Under these conditions, the only really effective way to combat riot coordinators is blocking the network, blocking communication channels.

The story that the FBI special agent and another unnamed witness told the court about looks very heartbreaking. I will allow myself to tell this story as I saw it. This is a ready-made script for another Hollywood action movie.

So, a patriotic American woman fell in love with a Russian spy. Love developed into a certain relationship, and the poor woman completely lost her head. And then the agent unexpectedly returned to Russia. But thanks to American technology, especially the internet, the romance continued.

When the events began in Washington, the woman in love decided to take part in them, as she was a long-time supporter of the Conservative Party. Yes, and her beloved from Russia supported her in this decision. Everyone knows that the Russians sleep and see how to do something dirty to the USA.

Further events developed quickly enough. After the storming of the Capitol, a woman accidentally finds herself in the office of the Speaker of the House of Representatives Nancy Pellosi, where the speaker's laptop, forgotten in a hurry, is on the table. She decides to make money from it. Steals the computer and informs his former lover about it ...

As we remember, this is a Russian spy. He offers to make money by selling a computer. The woman agrees to send the laptop to Russia, and the lover is already there selling this SVR computer! But the FBI cybersecurity officer closes the communication channel in time, and the woman is in the United States today and waits for her lover to find a way to ship the laptop to Russia.

Do you think I have a rich imagination? No, I voiced a story that the FBI and other special services are now really analyzing. The laptop is indeed stolen. And everything else that I talked about above is the version of the investigation. As proof, I will cite the testimony of the FBI special agent in the city of Mannasas, Janathan Lund (quote from RT message in Russian):

W1 ("WITNESS 1", "witness No. 1" - RT) stated that Williams (Pennsylvania resident Riley June Williams - RT) planned to send the computer device to a friend in Russia who then planned to sell the SVR device to the Service foreign intelligence of Russia. According to W1, the transfer of the computer device to Russia for unknown reasons did not take place, and the device is still with Williams, or she destroyed it. An investigation is ongoing on this issue.
Do you think that's all? I mentioned highly likely technology for a reason. It is clear that the testimony of even one FBI special agent will only cause smiles from most readers. It is then that begins to work "quite possibly" in the American way. Here is a quote from the testimony of an unnamed witness, by the way, provided by the same Janathan Lund:

I reviewed the documentation for a number of these calls. In them, the caller says that he and Riley June Williams have had a romantic relationship in the past, and states that he saw Williams in video footage taken at the US Capitol building on January 6, 2021. W1 also claimed to have spoken to Williams' friends, who showed W1 a video of Williams retrieving a laptop or hard drive from Speaker Pelosi's office.
Thanks to my colleagues for the high-quality translation of the document from the American Politico edition. But for a complete picture of what is happening, there is not enough action that is now being carried out by other US special services.

If there are no facts, then "highly likely" is enough

One detail is missing to create a complete picture of enemy participation in the capture of the Capitol. It is necessary to find direct evidence of the participation of Russians, Chinese or Iranians in the events in Washington. This is what other US intelligence services are doing now. In particular, last week a joint report of several special services on the activation of agents of influence of the aforementioned countries was presented to Congress.

And if you carefully read what is known to the American press, you get a rather strange picture. Among the pro-Russian, pro-Chinese or pro-Iranian agents of influence are supporters of President Trump. It gets really interesting. I can’t resist, I use the hackneyed phrase about “what do they smoke there”.

I don’t understand why an “unnamed witness” has not yet appeared that the attackers were financed by bankers from third countries. We already know about such accusations from our or Chinese bankers. The people are prepared. For part of the US population, the Chinese and we do nothing but shit to good Americans at the door.

But this is a matter of time. It is already known that four congressional committees at once are conducting their own investigation into the capture of the Capitol. A statement from one of the committees explicitly states the purpose of these investigations. Find out how (financing, spreading disinformation, using agents of influence, etc.) "foreign powers sought to take advantage of the crisis and aggravate it."

So, what is next?

I wonder how the confrontation between Republicans and Democrats in the United States will end? It is this question that worries very many today. The fact that the United States will change is understandable. The old scheme has become obsolete. But in what direction will these changes take place? What can the world expect?

This is not an idle question. It really touches a huge number of people around the planet. The United States today occupies a leading position in the world, and the influence of Americans on the political and economic situation in many countries is evident. And nobody can give an answer to this question today. Even those, thanks to whom all this confusion started.

Personally, I think the US is expecting some really serious changes. How this will happen, peacefully or through some kind of forceful action is not particularly important. It seems to me that the United States as a state will be able to avoid disorder, but only if the state's power is sufficiently strengthened. To put it harshly, today the question of power in the United States stands like this - democracy or authoritarianism.

Most likely, the new president will take the second path ...

Ctrl Enter
Noticed oshЫbku Highlight text and press. Ctrl + Enter
We are
Situational analysis of the death of the MH17 flight (Malaysian Boeing 777), made on the basis of engineering analysis from 15.08.2014Results of the week. “In our cooperative, the board is always agreed”
Military Reviewin Yandex News
Military Reviewin Google News
67 comments
Information
Dear reader, to leave comments on the publication, you must sign in.