"Lokhanki" on the battlefield - armored vehicles of the First World War 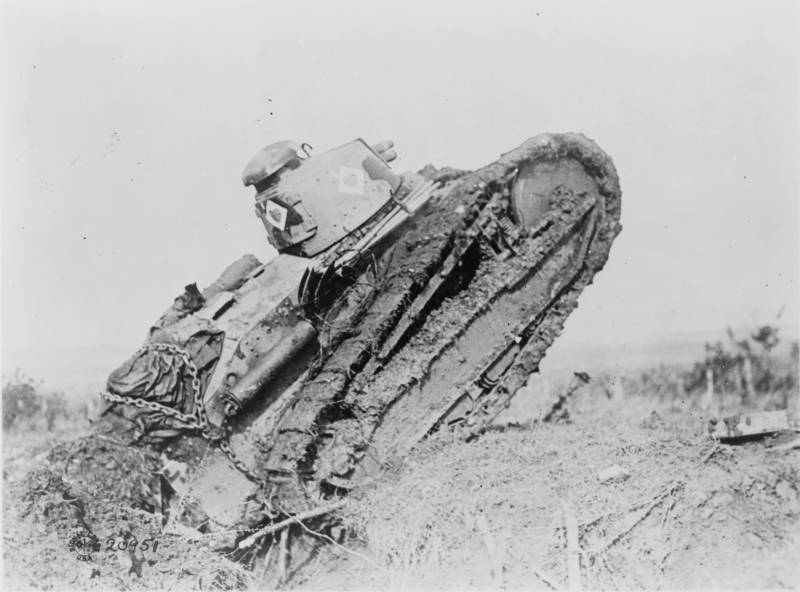 What were the first Tanksthat appeared on the battlefield?


The British are considered "pioneers" in this matter, but in fact they were inspired by their military allies - the French - to produce tanks. Many experts today consider the Renault FT the most successful tank of the First World War. Moreover, the armed forces of several countries, including the United States, acquired licenses for the production of this machine and used various modifications of it until World War II.

By 1917, the French had made a prototype, which was put into mass production at lightning speed. By the end of the war, 4500 were delivered to the battlefields with little or no additional improvements. And why?

The Renault FT in its lightweight division was almost perfect. The tank's crew consisted of two people, who were one after the other in a space that had a width slightly less than the shoulders of an adult man. Ahead is the driver, immediately behind him is the commander-gunner.

The rear "tail" was designed in such a way that the car could easily overcome trenches, and the modern chassis worked well on almost any ground and relief. However, being in the car was still a "pleasure": almost all the free space was occupied by the equipment. The four-cylinder engine at the rear, growling and rumble like a hellish forge, was separated from the crew only by a thin partition.

The driver is literally "stuck" in the control levers. The commander loomed over him so close that the only way to communicate or control was a good kick in the back. Pavda, while a whole system of "code" kicks was being developed ...

The point is not at all in the inhumanity of the designers, but in the fact that at first they planned to use the FT only for short attacks, and therefore did not care much about the comfort of the crew. Well, the commander of this vehicle had to stand all the time ... Suffer!

However, life has made its own adjustments, and over time, Renault developers were forced to add some changes to its design, at least somehow alleviating the torment of the unfortunate crew members.

proved to be technically unreliable.

A third of fresh specimens leaving factories had to be returned immediately for repair. Due to the constant lack of parts, maintenance on the battlefield was quite difficult. The situation was exacerbated by the poor quality of the fuel filters and fan belts. In the last months of the First World War, 10% of the cars on the front lines were waiting for spare parts.

At first, no matter how terrible the Entente tanks were for the Germans, they found it cheaper and more efficient to focus their energy on the development of anti-tank artillery, and not on the construction of their own similar machines. However, over time, it came to the Teutons that without "armor" in the modern theater of military operations - nowhere. With a fair delay, but they also began to move in this direction.

The only German tank of the First World War was, rather, a well-armed vehicle than a tank in the modern sense - albeit with an amendment for that distant time. Its cheap steel armor 20-30 millimeters thick protected only from enemy bullets, but not from grenades.

But inside the smoky and thundering "womb" of this miracle of technology, the thrifty Germans managed to cram as many as 17 soldiers! In addition, thirty tons of weight and low ground clearance made the A7V suitable for use only on decent European roads. On the other hand, he was armed with what he needed.

Also, the German A7V gave a head start to its competitors in something else: two Daimler gasoline engines of 200 horsepower made it the most powerful combat vehicle of its time.

As a result, it turned out to be unsurpassed in terms of speed, although this characteristic was never used due to its high fuel consumption, and in reality it did not exceed 5 kilometers per hour. At the same time, the power reserve was 60 kilometers - despite the 500-liter fuel tank.

What is definitely worth noting about the A7V is its incredibly high quality workmanship, which was terribly expensive as it was done by hand. Because of the latter, standardization was almost impossible. No two parts were alike ...

Like the French and the Germans, the Italians abandoned the trapezoidal design of British tanks.

Working hard, they, albeit with some delay, also put into service the armored representatives of the new army. In 1917, only plans were ready, the Fiat prototype itself appeared only in 1918. What makes us think of their creation, the Fiat 2000, is its weight, armament and armor.

In the rotating turret of the 40-ton monster was the most powerful cannon at that time with a caliber of 65 millimeters. The on-board weapons system, in addition to it, included eight 6,5-mm machine guns. Its twenty-millimeter armor was made of the highest quality armor plate that surpassed all modern models in its properties.

The United States, which entered the war in its final months, also appeared on the European battlefield with a "secondary" version of the Renault FT. But practically at the same time, Ford Motor Company (the first in the United States) presented a project of an entirely American tank.

It was only 3 tons lighter than the FT, and was wider, which made it more stable than the French. The shooter and the commander were no longer one after the other, but next to each other. However, the engine was not separated from the passenger compartment, so being in a fetid, hot and noisy interior space, according to numerous reviews, greatly reduced the fighting qualities of the crew ...

Another serious drawback of this 3-ton tank was the lack of a turntable. Thus, it could only be considered as a self-propelled 7,62 mm machine gun, although at one time it was considered quite maneuverable with its 90-horsepower engine and a maximum speed of 12 kilometers per hour.

However, Ford did not have time to acquire serious combat experience because of the 15000 units ordered by the army, by the end of the war only two had arrived at the US troops stationed in France.

This is how they were - the first combat "pelvis".

Composite armor, super-powerful engines, computerized fire control systems, powerful weapons - it was all yet to come.

This was the beginning of the tank era of humanity.