"Iron and blood." Creation of the Second Reich 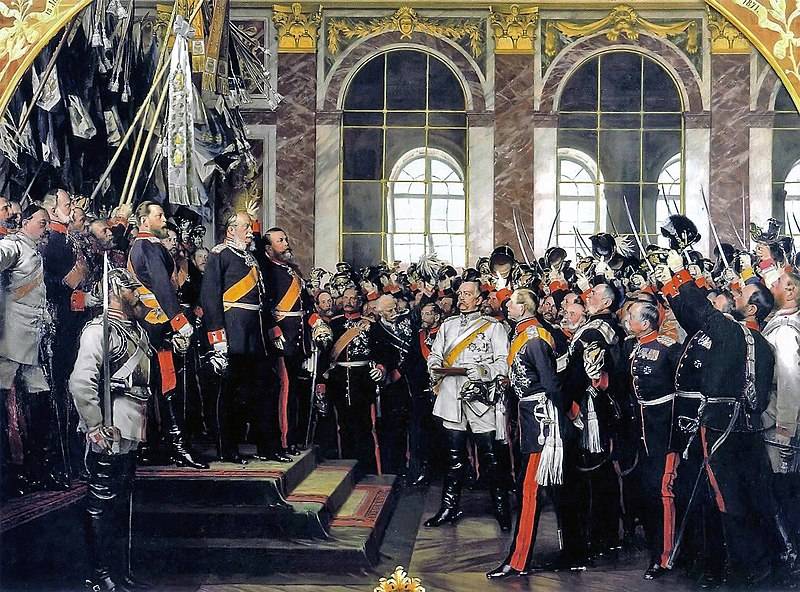 Proclamation of the German Empire at the Palace of Versailles near Paris in 1871. Painting by A. Werner

The Second Reich was created 150 years ago. On January 18, 1871, the monarchs of all German states in a solemn atmosphere at Versailles proclaimed the Prussian King Wilhelm the German emperor. Germany was united by "iron and blood" by Chancellor Otto von Bismarck and Wilhelm.

Prussia during the Franco-Prussian War of 1870-1871 crushed the main enemy on the continent - France. Germany was created during the war, but in general it was a progressive phenomenon for the German people.

The need for German unification

Even during the wars of Napoleon, under the influence of the French Revolution, German nationalism and pan-Germanism arose. German nationalists believed that modern Germans are the heirs of the ancient Germanic ethnos, but live in different states.

The fragmentation of Germany has a negative impact on the people, economy and military-political power. A pan-German cultural and political movement was formed.

On the other hand, in the XNUMXth century, the economy developed rapidly, the size of the bourgeoisie, the urban "middle class" grew. Liberal ideas were spreading among the intelligentsia and students. The unification of Germany was a progressive step, it was necessary to destroy the old borders, various laws, customs, monetary units, feudal orders (shop organization, etc.), to bring everything to uniformity. Create a unified government, constitution, government system, currency, economy, army, etc.

At the same time, at the Vienna Congress, after the defeat of Napoleon's empire, the fragmentation of Germany was preserved. In 1814, the German Confederation of 38 states was created. It was a confederation of independent states.

The supreme body of the Union was the Bundestag (Union Seim), whose members were appointed by the monarchs. The meetings of the Union were held in Frankfurt am Main. The emperor of Austria was formally considered the head of the Union.

Each state of the Union retained its sovereignty, in one - the king had absolute power, in others - there were estate-representative assemblies, in several -
constitution. The Habsburg Empire held a dominant position in Germany for a long time. However, Vienna, for various reasons, could not unite Germany. Therefore, the Austrians tried with all their might to prevent the main competitor - Prussia.

In Germany, there were two leading ideas for the creation of a single state.

The Great German way assumed the unification of the country led by the Austrian emperor. The problem was that the Austrian Empire was a multinational state. And the Germans were not the majority there (more than half of the population were Slavs, and the Hungarians were also a large nation). In addition, the House of Habsburgs pursued a more conservative policy than many other Germanic monarchies. It was the stronghold of absolutism and the old order. Therefore, support for this plan in German society was minimal. As the problems in Austria (since 1867 - Austria-Hungary) grew, support for this program became minimal.

On the contrary, the lesser-German way - unification around the Prussian kingdom without the participation of Austria - became more attractive for the Germans.

European revolutions 1848-1849 led to the intensification of liberal democratic and national sentiments in Germany. In many German states, more liberal governments came to power. The Austrian Empire was threatened with collapse due to the Hungarian uprising. In the German lands, the nationalists raised the question of transforming the Union into a federation.

The Bundestag was replaced in May 1848 by the Frankfurt National Assembly (the first all-German parliament). A discussion began about an all-German constitution. The attempt to create a unified government failed. While the liberals chatted about the country's future, the conservative forces launched a counteroffensive. The first successes of the revolution were eliminated in many German states.

As a result, in 1849, the parliament offered the imperial crown to the Prussian king Frederick William IV (the Little German way), but he refused to accept it from the "street kids". Prussia denied parliament legitimacy, recalled its representatives and suppressed the revolution by force. Parliament was dispersed at the end of May 1849.

The revolution showed that unification is inevitable. The Prussian elite decided that it was necessary to carry out the process “from above”, until it went “from below”. It also became clear that the Austrian Empire, which survived only with the help of Russia, would not be able to lead the process of German reunification. The Habsburg Empire was a "patchwork empire", and the peoples that were part of it, especially the Hungarians, did not want the strengthening of the German element in the country. And the "East Germans" were not ready to secede from the territories not inhabited by the Germans. 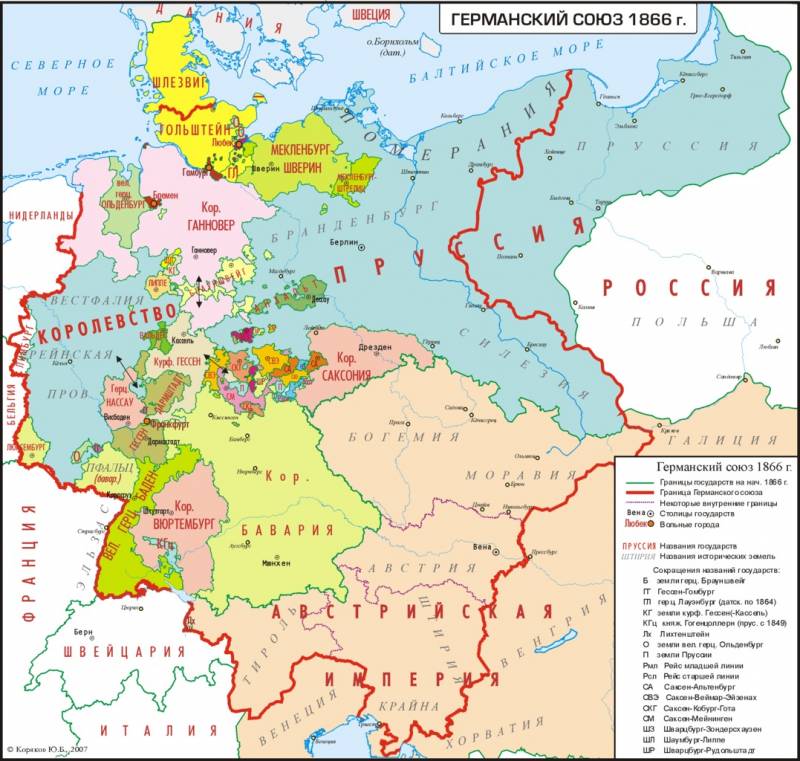 German Confederation before the outbreak of the Austro-Prussian War 1866

"With iron and blood"

Prussia, taking advantage of the weakening of Austria and seeing the corresponding support in the society, led the process of German unification. In 1849, the Prussian Union (Union of Three Kings) was created, in which Saxony and Hanover gave Berlin foreign policy and the military sphere.

This union was joined by 29 states. Austria was forced to conclude an agreement with Prussia on the joint management of Germany. In 1850, the activities of the German Confederation were restored (the Frankfurt Sejm was convened). At first, Prussia opposed this, but under pressure from Russia and Austria gave way.

"Not by pompous speeches and voting of the majority, but by iron and blood the great questions of our time are being solved"
(in fact, the same policy was previously pursued by Napoleon).

Bismarck was an outstanding statesman and was able to carry out his program of military-economic, political strengthening of Prussia (the core of Germany) and the unification of the country.

The first steps in the unification of Germany were the war with Denmark and Austria.

In 1864, Prussia and Austria defeated Denmark, resolving the issue of Schleswig and Holstein. Denmark, according to the Vienna Peace, ceded the rights to the duchies of Schleswig, Holstein and Lauenburg to Emperor Franz Joseph and King Wilhelm.

In 1866, the Prussian army swiftly defeated the Austrians. According to the Prague Peace Treaty, Vienna transferred Holstein to Berlin and withdrew from the German Confederation. Prussia annexed Hanover, Hesse-Kassel, Hesse-Homburg, Frankfurt am Main and Nassau.

The Prussian kingdom now had no competitors in the Germanic world. Austria was going through a new wave of crisis.

Russia maintained neutrality and this helped Prussia. In fact, St. Petersburg avenged Austria for its hostile position during the Crimean War, largely because of which the war was lost. Subsequently, Russia allowed France to be defeated, which made it possible to partially cancel the humiliating articles of the Paris Peace of 1856.

The interests of the German bourgeoisie were supported by the introduction of freedom of movement within Germany, a unified system of measures and weights, the destruction of shop restrictions, the development of industry and transport. An alliance of the bourgeoisie and the government was formed. The middle class was vitally interested in completing the country's unification and further expansion.

The main enemy of the unification of Germany led by Prussia was France. Emperor Napoleon III considered himself a full-fledged successor to Napoleon's great-power policy. France was supposed to dominate Western Europe and prevent the unification of Germany. At the same time, the French were confident in the victory of their army, they considered it stronger than the Prussian (they greatly underestimated the enemy, overestimated their strength).

The French government allowed itself to be provoked to

"To punish the Prussians."

However, Prussia, unlike France, was preparing for war. Her army was better prepared morally and financially. The French suffered a crushing and shameful defeat in the war of 1870-1871. The French armies were defeated, surrounded and captured, the strategic fortresses surrendered. The French emperor himself was taken prisoner. A revolution broke out in Paris that overthrew the regime of Napoleon III and established the Third Republic. Prussian troops besieged Paris.

On January 18, 1871, the Prussian King Wilhelm was proclaimed emperor in the palace of the French monarchs Versailles. The imperial constitution was adopted on April 16. The union included 22 states and 3 "free" cities (Hamburg, Bremen, Lubeck). The states retained some independence - their governments and assemblies (Landtag). Local distances were maintained in order to strengthen the monarchist spirit and traditions.

The empire was headed by the emperor (aka the Prussian king), the chancellor, the Allied Council (58 members) and the Reichstag (397 deputies). The emperor had tremendous power: the supreme commander-in-chief, appointed and removed the imperial chancellor, the only general imperial minister. The chancellor was responsible only to the Kaiser and could disregard the opinion of the Reichstag.

The Reichstag discussed drafts of new laws and adopted the budget. A bill passed by the Reichstag could become law only with the approval of the Allied Council and the Kaiser. The Allied Council consisted of people who were appointed by the governments of the former German states and represented them. The Reichstag was elected on the basis of universal suffrage. Women, men under 25 and the military were denied the right to vote.

Prussia retained its dominant position in the empire: 55% of the territory, over 60% of the population, the Prussian elite predominated in the armed forces, in the higher bureaucracy.

The French government, fearing radical revolutionaries, preferred to conclude with Germany on May 10, 1871 in Frankfurt am Main

The empire included a new province - Alsace and Lorraine. France paid a large contribution, which was aimed at the development of the country.

The victory over France became the political and economic foundation of the Second Reich. 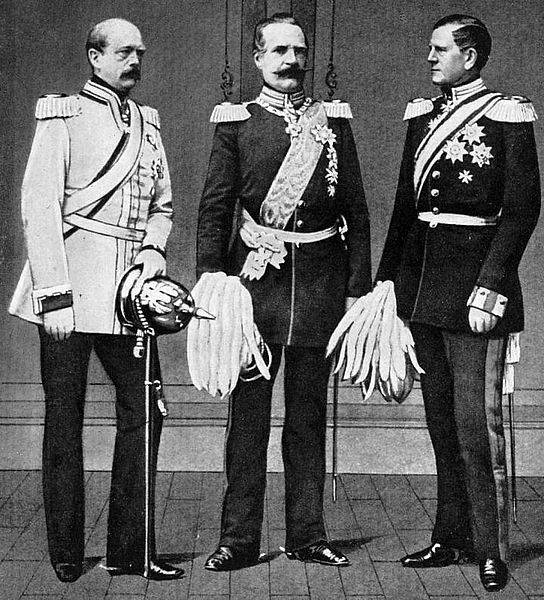 Prussian triumvirate of the 1860s, which turned Germany into a great power in the second half of the XNUMXth century. From left to right: "Iron Chancellor" Otto von Bismarck; Minister of War of Prussia, reformer of the army and his closest associate Albrecht von Roon; a prominent figure in military science, Chief of the General Staff Helmut von Moltke.