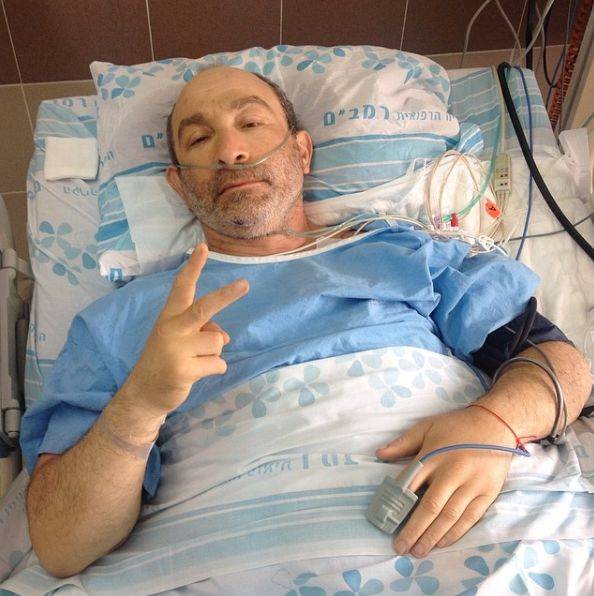 This winter turned out to be snowless, rainy and foggy for our city. The sun was constantly hiding behind a veil of low floating clouds. It seems that nature itself was preparing Kharkiv residents for something terrible ...

The mayor of the city, Gennady Kernes, who ruled the city for ten years, died. However, the word "manager" does not fit in any way to assess the activities of Gennady Adolfovich Kernes, who during this period simply transformed Kharkov.

Against the background of widespread collapse, oppressive devastation and constantly growing neglect of Ukrainian cities, not excluding Kiev, our city looked and still looks like a real pearl.

On the morning of December 17, 2020, I saw several elderly women crying near the Posad store. Approaching them I heard:

"Kernes died ... We are orphaned ... What will happen now ... Our Kharkov will be torn apart ..."
Residents and guests of the city did not get tired of admiring our Kharkov, which, in terms of improvement and convenience, rightfully took one of the leading places among European cities.

Here are just a few of the achievements of Kharkov, made under the leadership of Gennady Kernes. Because of them, he will forever remain in the memory of grateful Kharkiv residents:

- large-scale reconstruction of the most popular and favorite recreation places of Kharkiv citizens - the park named after Maxim Gorky, the garden of Taras Shevchenko, Sarzhin Yar, boulevards named after Yuryev and Zhasminovy ​​(former Petr Slinko streets), the Strelka square on the river embankment;

- equipped with a 7,6 km cycle path along the Belgorod highway. 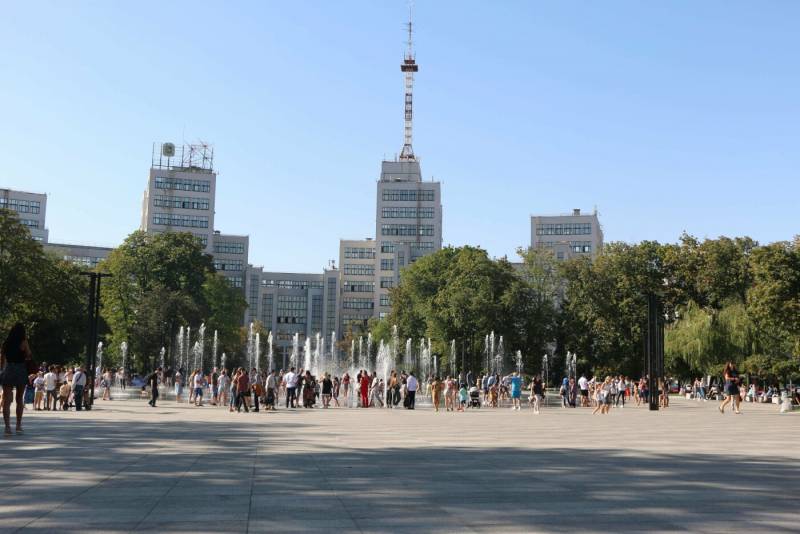 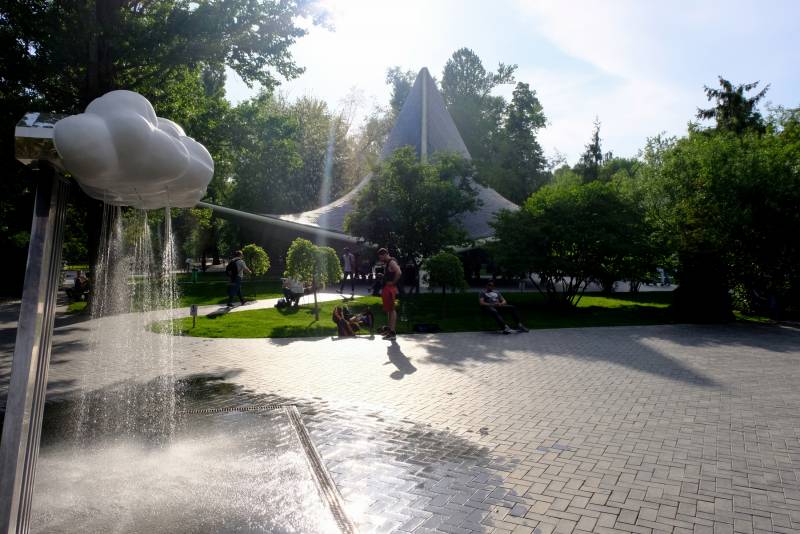 Kernes organized the mass privatization of apartments in the hostels and renovated them. Built parking spaces and shelters for homeless animals. Provided payments to the participants of the Great Patriotic War.

Everywhere he personally dealt with the pressing problems of ordinary citizens, which, against the background of general indifference, theft and corruption of the Ukrainian authorities at all levels, looked like the only blank spot in all of Ukraine. 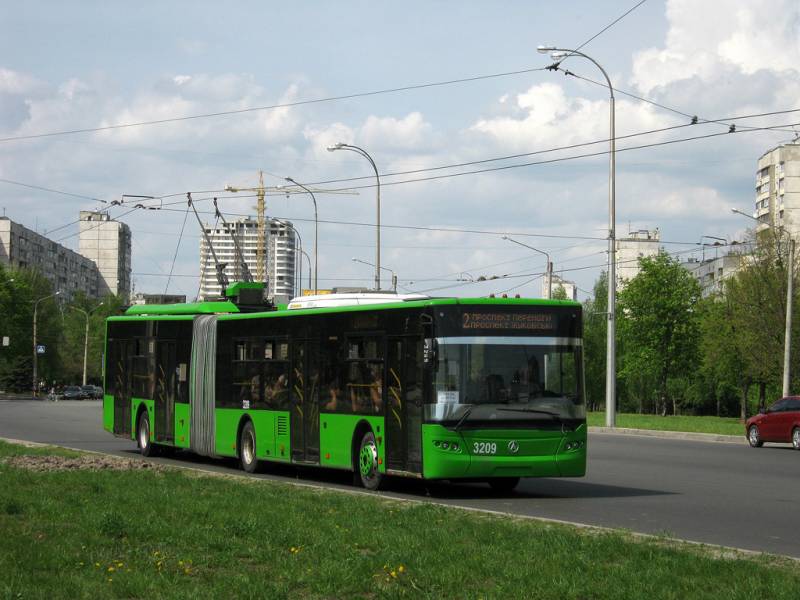 For the first time in stories the city of Kernes took up in-yard lighting, which is now practically everywhere. And the telephone number of the Kharkiv mayor's office "1562" has become a real magic wand for residents. You could call on it at any time of the day and report your problem. Gennady Adolfovich personally at the sessions of the city council read out the messages received on this phone, and the demand from officials for non-compliance with the requirements of residents was the strictest.

Immediately after the death of Gennady Kernes, the ex-governor of the Kharkiv region, one of his closest associates, Mikhail Dobkin, in an interview with TV channels, told about how he once drove with Kernes in a car around Kharkiv. He interrupted the conversation all the time, called on the phone and gave instructions to immediately remove the garbage or patch up a hole in the road. And on the way back he personally checked the fulfillment of his instructions. This was the late mayor's very effective management method: every official and employee of the municipal services of an almost two million city knew clearly that the demand for fulfilling duties would always be the strictest ...

In the spring of 2014, during a traditional morning jog along the Belgorod highway, Gennady Kernes was seriously wounded by a still unknown sniper. The bullet pierced the liver and lung, went right through. After a long and grueling treatment, Gennady Adolfovich returned to managing his beloved city, but since then he was forced to move in a wheelchair. Then he said that the Minister of Internal Affairs of Ukraine Arsen Avakov, who is still there, was involved in the murder attempt. The assassination attempt on Kernes remained unsolved.

And on September 16, 2020, Kernes, diagnosed with COVID-19, was evacuated to the Berlin clinic "Charite" by the same plane on which the allegedly poisoned person was brought from Omsk to the same clinic the day before (either through a bottle of drinking water, or through his cowards) of the alleged Russian opposition leader Alexei Navalny.

On the night of December 16-17, 2020, the heart of the mayor of the first capital and second largest city of Ukraine stopped beating.

Social networks, broadcasts of TV channels and radio stations immediately filled with grief of Kharkiv residents. Hundreds, thousands of people shared their memories of how the deceased helped them: some told how he paid for the treatment of his relatives from his own funds, and there were a lot of such testimonies. Others recalled how Gennady Kernes, moving around the city already in a wheelchair, answered greetings from Kharkiv residents and tirelessly took pictures with them. 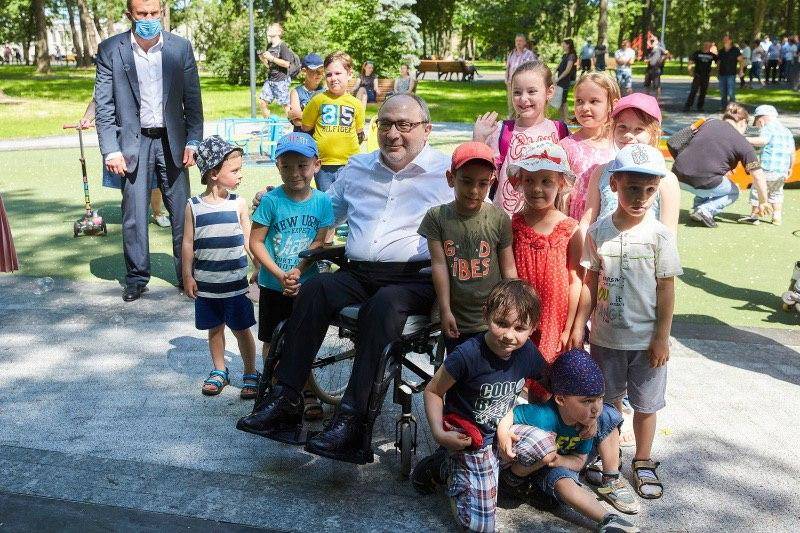 Kharkiv residents thanked him for saving Kharkiv from mass bloodshed in the spring of 2014, and did not allow it until the very moment of his death. The people themselves, without any command from above, offered to erect a monument to Gennady Kernes in the center of Kharkov, to name a metro station and one of the streets after him. Later this popular initiative was supported by the city council.

Who danced on the bones of Kernes, and who sincerely regretted?

True, there were those who hastened to dance on the bones of the deceased. They were nationalists and Nazis from the "National Corps", "Azov", "Right Sector" and other similar organizations. Not hiding their cave anti-Semitism, they immediately gladly began to shout that it would be

"The final burial of the scoop",

"The end of Jewish rule has come."

And at that moment, when the mayor's body will be lowered into the grave, they will mockingly launch fireworks not far from the 2nd city cemetery, where he was buried ...

This "burp" of the Ukrainian people was painfully offensive to observe how the entirely Russian-speaking Kharkov flourished against the background of other Ukrainian cities, completely denying cave Russophobia, nationalism and Bandera together with Shukhevych as heroes. They really want Kharkiv to become as littered as Kiev, to have the same broken roads as Nikolaev and Ternopil, Dnieper and Zaporozhye, Ivano-Frankivsk and Sumy. 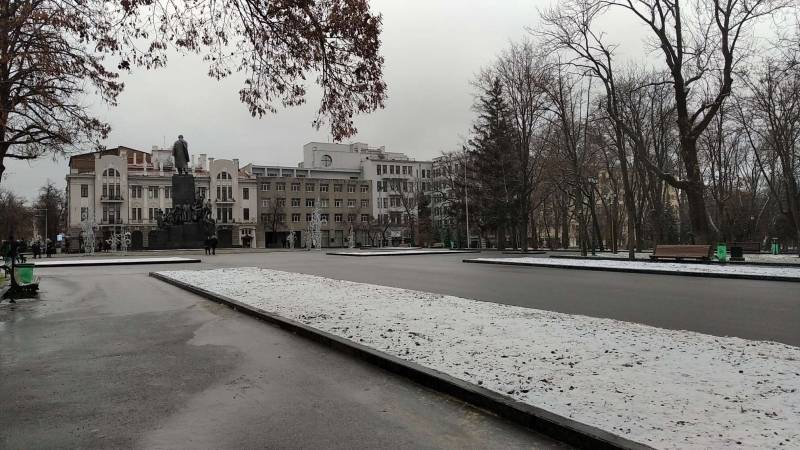 On the morning of December 23, tens of thousands of people gathered at the Kharkov Opera and Ballet Theater on Sumskaya Street. According to official figures, there were about a hundred thousand of them.

In fact, there were at least twice as many of them. Kharkiv residents stood in a huge queue in several rows, stretching from Freedom Square to the theater, and the number of those wishing to say goodbye to their beloved mayor was constantly growing. 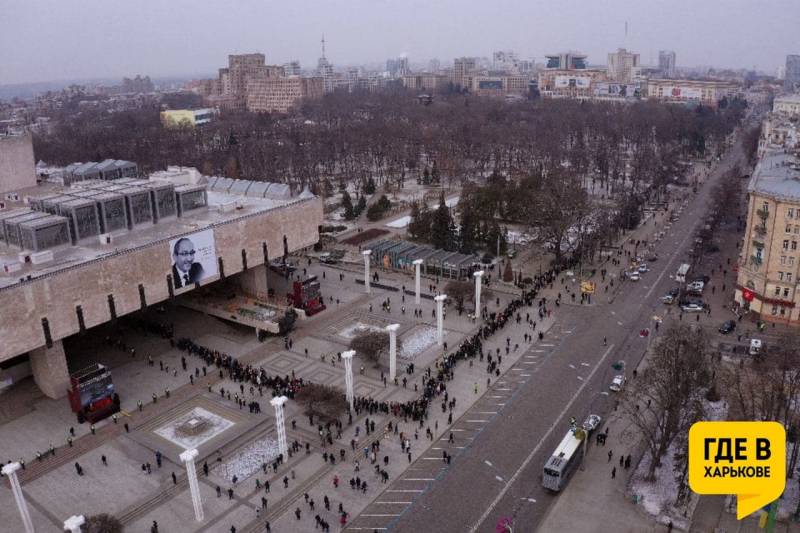 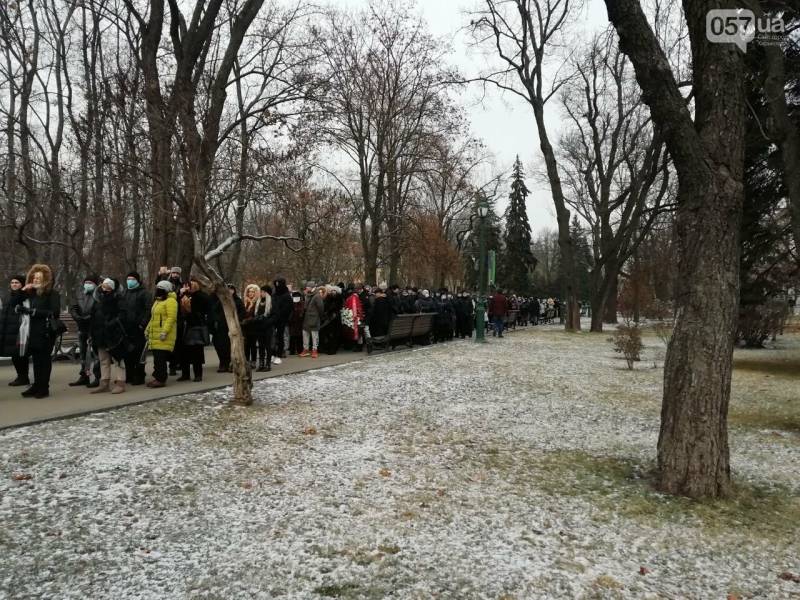 People massively shared their indignation at the fact that the President of Ukraine had banned the participation of the guard of honor and the military band in the funeral, although the day before they were holding a rehearsal of the ceremony.

Zelensky himself did not attend the funeral of the leader of the second largest Ukrainian city, and did not send anyone. And the mayor of Kiev Vitali Klitschko who arrived here insulted Kharkov and all its inhabitants, saying that

"Assesses the activities of Gennady Kernes as ambiguous",
and then took a selfie right in the funeral hall.

In the queue, one could hear everywhere a comparison of the deceased with another well-known Kharkiv mayor and governor, Yevgeny Kushnaryov, who allegedly died from an accidental shot while hunting in 2005.

All Kharkiv already knew then that his death was not accidental, but he was killed during the presidency of Viktor Yushchenko, who did not need this independent Kharkiv politician as an all-Ukrainian leader-competitor.

In 2020, Gennady Kernes was overtaken by a bullet fired in 2014, but finally depriving him of his life and health after falling ill with coronavirus.

On the day of the funeral of the mayor of Kharkiv at the funeral ceremony, Kharkiv residents massively expressed the opinion that his death, like the death of Yevgeny Kushnarev (the most popular and independent Kharkiv leaders of the XXI century), were both not accidental.
People blame Kiev for this.

And in the case of the untimely death of Gennady Kernes, there is also the Berlin clinic "Sharite".

The Sharite Clinic became the last refuge for Kernes not by chance?

As you know, it was she who ensured the election of Yushchenko, this most unpopular and hated Ukrainian president by the people, announcing his alleged poisoning with dioxin.

The same clinic has successfully "cured" Alexei Navalny from "poisoning" with the Novichok poison. And she could not save Gennady Kernes?

Or did Sharite not want to?

Or was she given someone's order not to save the Kharkiv mayor? Or, moreover, just to kill?

After all, it was in "Sharite" that a nurse worked, who deliberately killed six patients. In addition, the connections of this clinic, securely closed from prying eyes and the public, with the special services of Germany, the United States and Great Britain have long been no secret to anyone.

Who or what forced the relatives of Gennady Kernes, or, perhaps, himself, to make a decision on treatment for coronavirus infection in Sharite, which has such a deadly (literally) sad reputation?

Perhaps the beloved mayor would have survived if he had entrusted his life to another medical institution?

And if Kernes had been vaccinated against the coronavirus in Russia in time or had gone to Russia for treatment, would he have survived?

Kharkiv residents ask these questions. And so far they have not found an answer to them.

In the meantime, Kharkiv excites.

The fight for such a tasty and not yet plundered largest city of Ukraine has already begun. The Minister of Internal Affairs of Ukraine (yes, the same Arsen Avakov, whom the late Gennadiy Adolfovich accused of the 2014 assassination attempt), without even waiting for the “sorokavin” of the deceased, announced his claims to become the “gray” cardinal of the Kharkiv region. He will do his best to push his candidate for this post. And he will stop at nothing, including either murders or outright terror.

Pushing each other away, nationalists, corrupt officials, thieves, bandits and just Ukrainian adventurers of all stripes are rushing to the chair of the Kharkiv mayor.

But the overwhelming majority of Kharkiv residents intend to elect only their fellow countryman and sincere associate of the late Gennady Kernes as mayor.

Neither Kiev nor other Varangians from other Ukrainian regions will be allowed here for sure.

Ctrl Enter
Noticed oshЫbku Highlight text and press. Ctrl + Enter
We are
The day of "fox"What you didn't want to know about England
Military Reviewin Yandex News
Military Reviewin Google News
177 comments
Information
Dear reader, to leave comments on the publication, you must sign in.