The road to each Temple is important for us 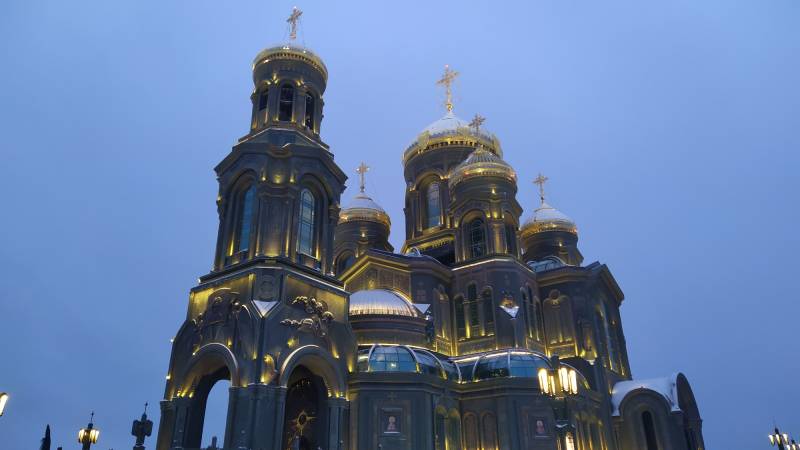 Russia, of course, is a multi-confessional country, and there are many mosques, synagogues, Buddhist stupas in it, and non-Orthodox Christians cannot consider themselves deprived. However, as a person baptized in the Russian Church, I will speak here just about the attitude towards our churches, chapels, cathedrals and temples.

Starting with the main

In the new and little-known Patriot Park, which is located in the Odintsovo district of the Moscow region, the Church of the Resurrection of Christ, the Main Temple of the Russian Armed Forces, almost does not close its doors. I was lucky to see him these winter days.

The majestic temple was erected in record time and opened in the year of the 75th anniversary of the Great Victory. This austere and impressive building literally at once on the land near Moscow pleases everyone who comes here with its splendor, perfection and good looks. 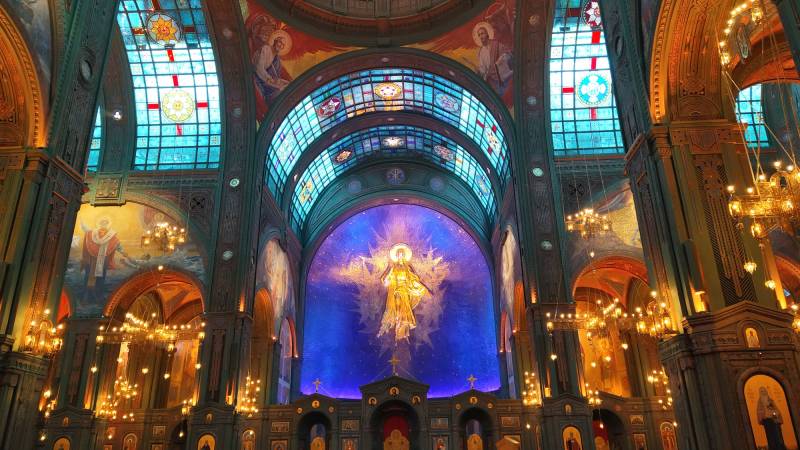 He ascended thanks to Russian patrons and donors, who did not skimp on their modest, and sometimes not at all modest donations for the sake of the embodiment of the feats of the defenders of the Fatherland in the complex of temple structures.

And everything turned out grandiose and stately. Everyone who comes here pleases the eye. And it touches the soul when next to the pompous cathedral there are such monuments as the grieving mother (pictured). 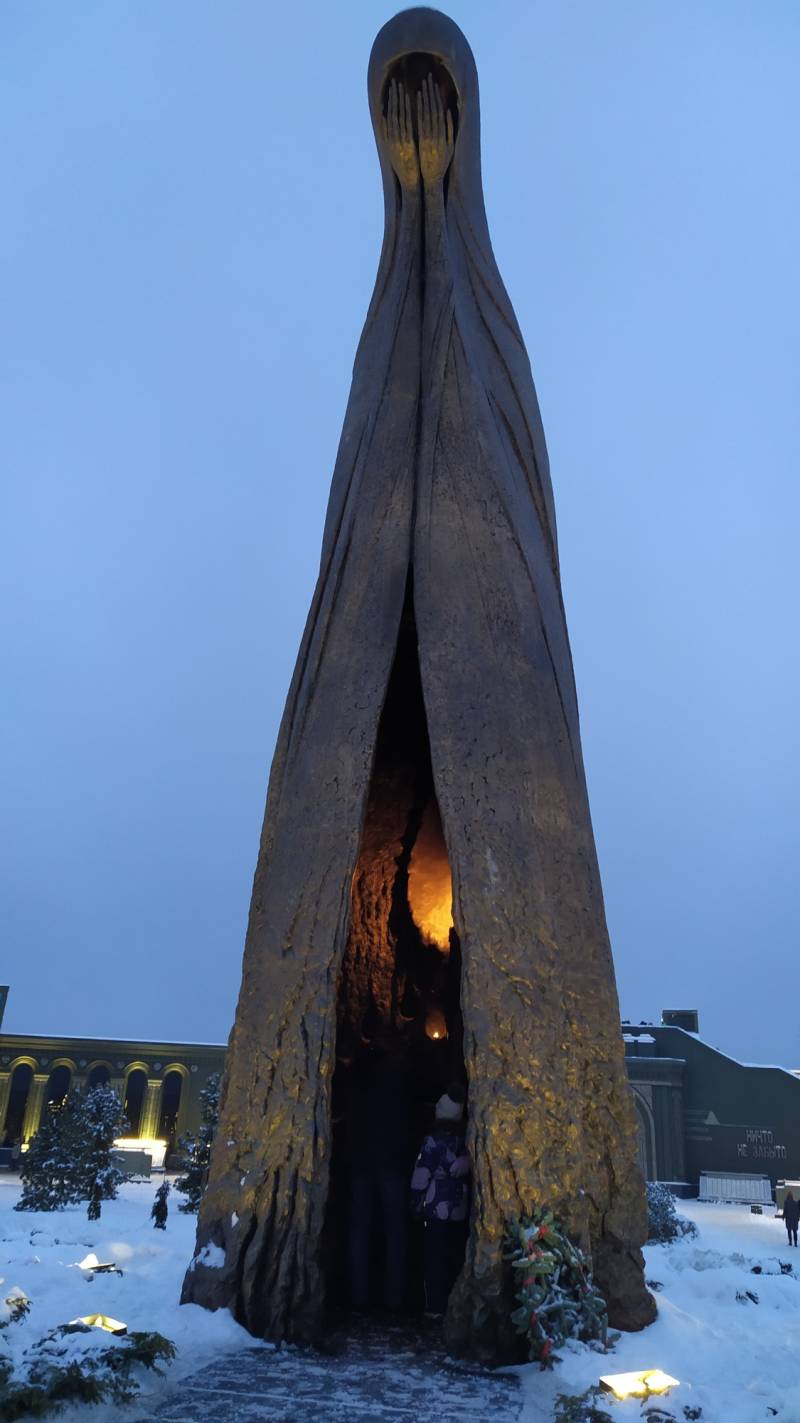 In the Main Church of the RF Armed Forces, absolutely everything is done wisely and fits perfectly into the realities of the XNUMXst century. Even when you notice the abundance of cell towers and security cameras, you can not stop simply rejoicing in this perfection. How did it manage to do so, seemingly and imperceptibly, but with due skillful attachment to objects, to do everything to the creators who adorned the Russian land with such splendor.

The main temple of the New Jerusalem Monastery will not give way to the main military cathedral with its beauty, revived after what the fascist "civilizers" did to it in 1941. 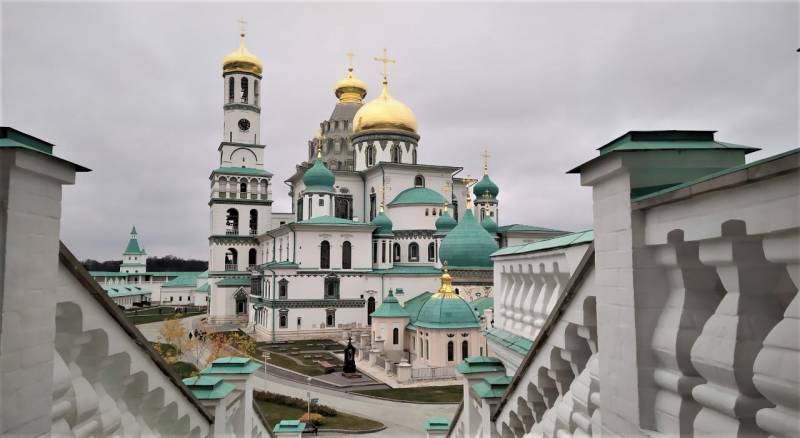 That's how it would be everywhere in our country. No matter where you go or stop by - everything is fine, original and unique.

On the Yaroslavl land

With this thought in mind, I decided to visit other, no less magnificent temple buildings in the Moscow region and beyond - in the Pereslavsky district of the Yaroslavl region.

So my journalistic destiny brought me to the village of Mikhailovskoye, not Pushkin's, but much quieter. I came to admire the dacha of a fellow border guard, who told me on the way that the main surprise would open to me as soon as we enter the main street of the village.

When the splendor of the Temple of Archangel Michael appeared to my eyes, I was stunned. It was built in the XNUMXth century at the expense of the daughter of Count Alexei Orlov-Chesmensky - Anna Alekseevna. What is this little comparable grace and at the same time power: the sun has just begun to rise, and immediately the massive walls of the cathedral and the high bell tower shone. 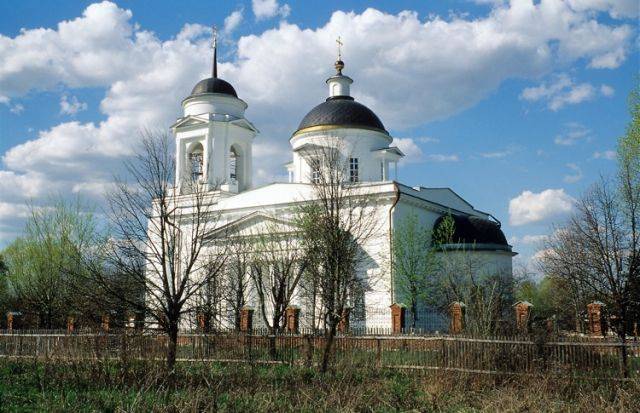 It seems to be a small village, but such an unearthly beauty. Apparently, obscurantists - atheists from the distant years of the last century - have not visited this temple for many years. They would put the order in the cult building, throwing the bells to the ground and settling down, turning everything around to dust and decay.

How did they or others like them do it in the tomb-crypt of the Orlov brothers "Otrada" in the village of Semyonovskoye. Already there they mocked to their satisfaction, stirring up the contents of the copper coffins and subjecting everything that was extracted to burning. 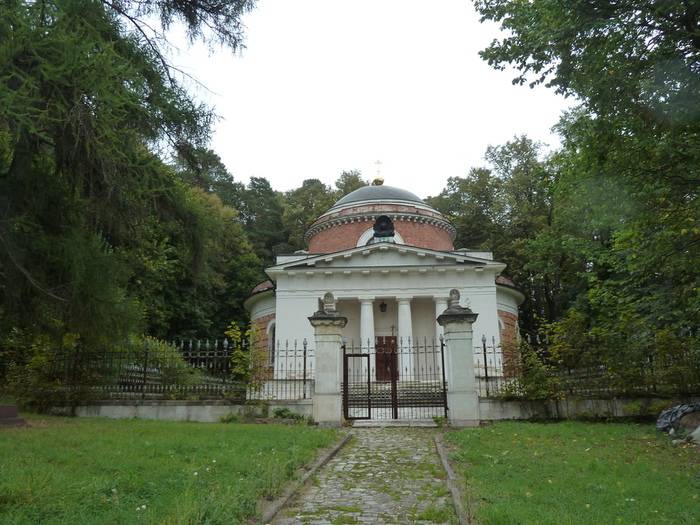 You will come and you will not be able to forget

But let's not talk about sad things anymore. We will rejoice this time at the stately construction of the daughter of Count Anna and we will rejoice at the fact that he brought up, despite all his dashing views, an excellent artist.

It was Countess Orlova-Chesmenskaya who sought out architects and builders who were able to translate her plan into such stone perfection. The parishioners are grateful to her and praise her to this day. Because you come to the Temple once and you are no longer able to part with it: it is constantly in your thoughts and earthly affairs.

And I also happened to visit Solba some ten years ago, where the Nikolo-Solbinsky convent was being restored at full speed. The scope of construction work was striking in its scale: everything around, as far as I could see, was in motion. People, mechanisms were constantly moving, and before our very eyes, what was previously destroyed was reviving.

Thanks to the abbess Erotiida, the monastery quickly regained its former glory and grandeur. It was she, thanks to the connections and the environment of donors created by her, that she ensured that the main gas appeared in Solba, which is still not available in the surrounding villages and villages.

It was thanks to her that the opening of a kindergarten and a "Good School" became possible in the monastery. Here children study and grow up in an Orthodox environment. They have everything, they don't need anything. 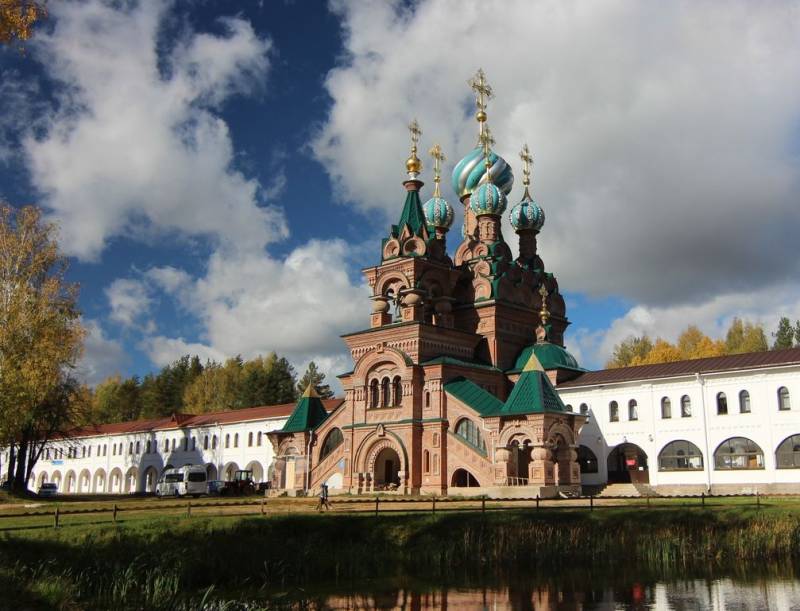 Yes, the glorious creators have not yet died out in Russia, thanks to whom the monastery gingerbread and ceramic workshops work. And what kind of water is in Solba - it flows and flows in a separate structure, as if it were alive, just substitute your palms. And now the life-giving moisture has already filled them, and all of it is so unusual, holy and tasty.

Pilgrims and tourists visit the Solbinsky monastery every day. Very soon, a renewed road will stretch to it. So come, there is something to see and marvel at.

In memory of the admiral

I so did not want to end my essay on a minor note, but having covered a little over fifteen kilometers, I found myself in the Highlands. Amazing village and lovely people.

On this land, the creator and winner in the Chesme naval battle, Admiral Grigory Andreevich Spiridov, together with his sons, erected more than two hundred years ago a beautiful temple of the Transfiguration of the Lord. 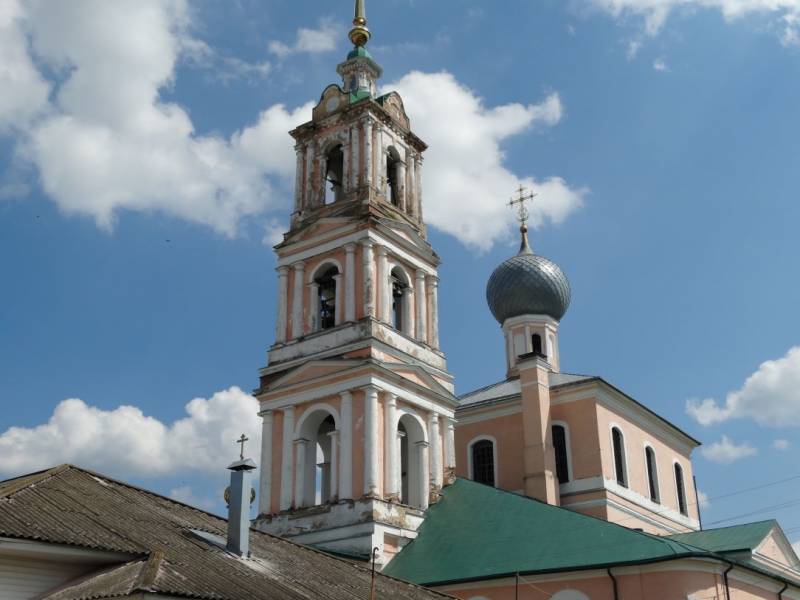 Here he is in front of us - and stately, and at the same time simple, with a bell tower and cannons from the Turks he had defeated. Enemy vents can still be seen in the temple walls, if only to look closely. The admiral's grave is in the temple (see photo). He died in Moscow, and is buried where, as he thought, he would always be at peace.

But the revolution took place, and the dark people reached out to the admiral's relics. They plundered, stole the admiral's dagger, and threw out the remains of the naval commander. They were buried by kind people behind the temple fence.

In the forties, when the fascist enemy was driven from the Russian land, the admiral fleet USSR Nikolai Kuznetsov revived the former glory of the glorious Admiral Spiridov. So, in March 1944, in the village of Nagorye, the central street began to be called by his title and surname. 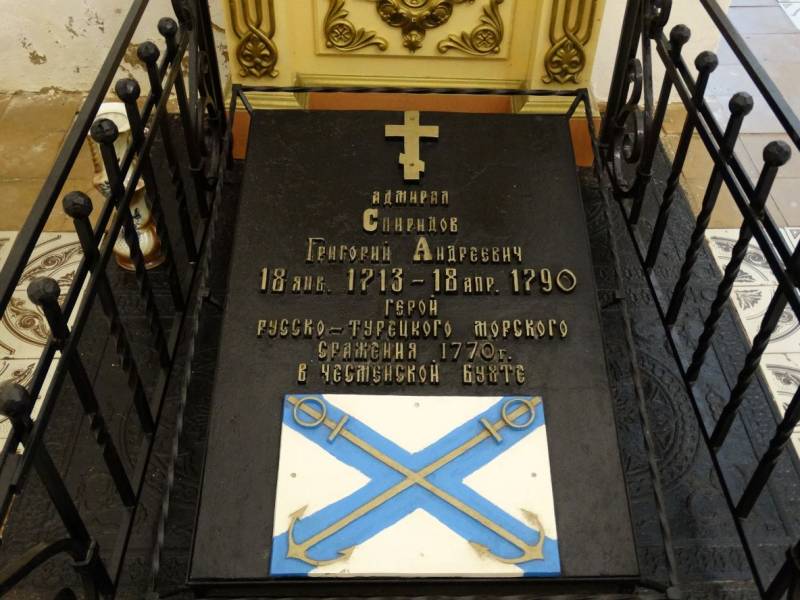 The remains of the hero of the Fatherland were returned back to the grave, but the devastated temple never regained its former grandeur. But in it repair shops worked regularly, blacksmiths forged steel and damask steel. Only in the 90s of the XX century, the temple was surrounded by scaffolding, and the restorers began to revive the temple buildings.

They managed to do a lot, but not all of them were skilled. Already a few years later, water streams, flowing along the improperly erected roof, began to grind the bricks, and they swam and are now crumbling. In some places, iron sheets perforated and in a thunderstorm and rain, water rushes into the temple chapels. 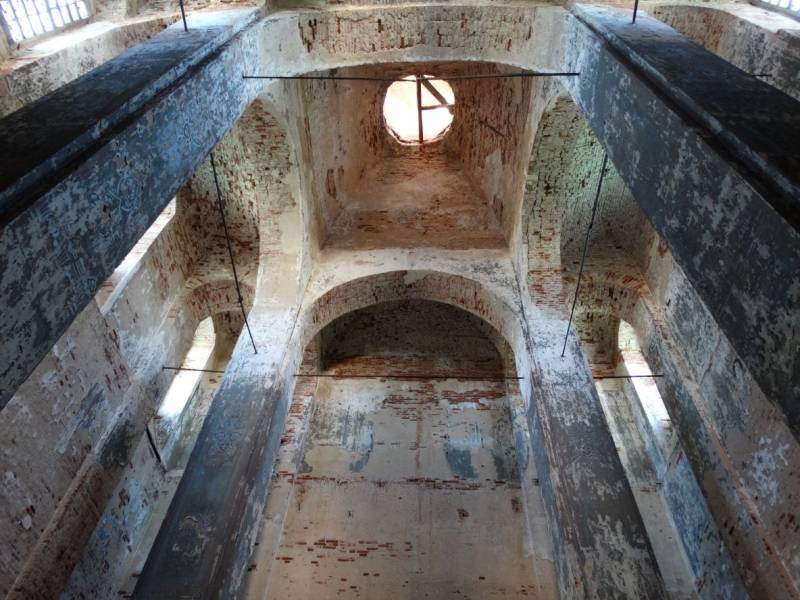 Not all of them have been restored either - apparently the funds have run out. Nevertheless, the Temple lives, works, services are held, and parishioners come here to praise the Most High and their neighbors in good prayers.

One for all of Russia

And the Lord sees everything and waits for the good oligarchs, of whom there are already more than two hundred on the Forbes list, to remember the greatest naval commander Grigory Spiridov. He also destroyed with Count Orlov-Chesmensky, captains of battleships and frigates, Russian sailors and soldiers of landing companies in one battle over 11 thousand Turks. 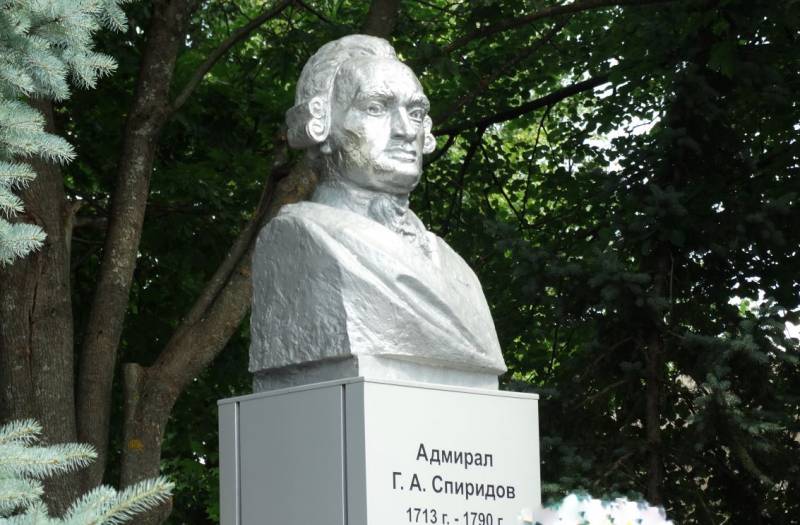 However, what is their fault, patrons of the arts: after all, in school textbooks stories, which they diligently read, only two lines were written about the Chesme battle, at most a small paragraph. And who after that will remember the greatness of the Chesme battle, and what did it bring to Russia?

In 2020, as you know, July 7 was the 250th anniversary of Chesma. Not many allowed themselves to remember this date, they just forgot. Only on July 26, at the Naval Parade in St. Petersburg, the name of Admiral Spiridov was first heard among other outstanding Russian naval commanders.

On this day, there was a holiday in the Upland - eminent guests arrived, and the service was conducted by the Bishop of Pereslavl and Uglich Vladyka Feoktist himself. The restored admiral's dagger was brought and handed over for eternal storage by the gunsmith Viktor Naumov from Zlatoust.

During the meal, the head of the Pereslavl administration Valery Astrakhantsev spoke, with whom many pinned great hopes for the revival of everything connected with Spiridov. But less than six months later, the head of the city district Pereslavl-Zalessky Astrakhantsev, who could not stand the battle with the local population and indifferent officials, left the battlefield for Lake Pleshcheyevo.

In 2019, the associates of the movement "For Admiral Spiridov!" addressed in a letter to Russian President Vladimir Putin with a request to resume restoration work in the Church of the Transfiguration of the Lord. This is not the first time, but so far all requests have frozen and remain unanswered to this day.

Today we have entered the year of celebration of the 325th anniversary of the Navy of our state. Let us also observe when grace will descend on the land of Nagoryevsk! This temple, given to all of us by Admiral Spiridov, is one for the whole of Russia, and it is useless to offend it or avoid it!

Ctrl Enter
Noticed oshЫbku Highlight text and press. Ctrl + Enter
We are
About Stalin and KhrushchevWhat you didn't want to know about England
Military Reviewin Yandex News
Military Reviewin Google News
404 comments
Information
Dear reader, to leave comments on the publication, you must sign in.