Who will rule the people's republics in the near future? 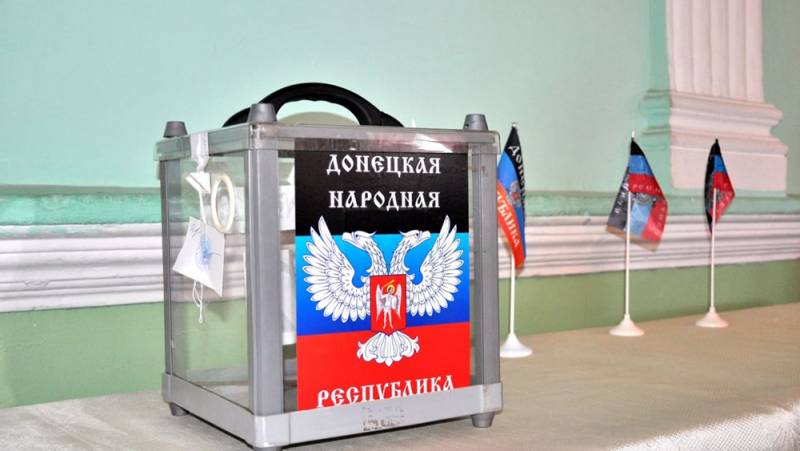 After another meeting within the Normandy format, despite the more than restrained comments of the Deputy Head of the Presidential Administration of the Russian Federation Dmitry Kozak, the network was instantly filled with an avalanche of “insiders” and “analysts”.

Among other things, "insiders" said that the issue of holding elections in the LPNR was discussed in Berlin (obviously, according to Ukrainian laws). To what extent these "insiders" correspond to reality and whether Ukrainian parties will ever appear in the LPNR are still dark questions. Nevertheless, the discussion of this topic prompted an idea: who in the republics is ready to fight for powers?

If the 2018 elections in the republics frankly resembled a farce (if only due to the lack of a real alternative to the appointees - Leonid Pasechnik and Denis Pushilin), the next ones threaten to turn into a tragedy: a bitter realization of the fact that in the seven years of their existence, the republics were never able to create though would be a semblance of elites attractive to the population.

Recognizable and charismatic personalities from 2014 (mostly field commanders) are almost all dead or in exile. And those who replaced them are hardly able to win the people's love. Not to mention the fact that they too often become involved in scandals.

However, let's take a closer look.

Considering that public life in the LDNR is exclusively nomenklatura, voluntary-compulsory in nature, it would be foolish to expect the appearance of attractive candidates from activists in the electoral field.

The situation is not much better among officials, ministers and deputies of the People's Councils. Someone is known by sight simply because they appear on the screens from time to time, but this, of course, does not add much attraction. And sometimes vice versa - it hurts. As, for example, in the case of the mayor of Gorlovka, Ivan Prikhodko, who is easily recognized far beyond the DNR, but is hardly remembered with a kind word.

There are people who have become familiar enough, such as, for example, the same deputy of the People's Council of the DPR Vladislav Berdichevsky ("Brig"). He is a regular talk show frequenter and active blogger. However, what he says often runs counter to the status of a politician and can only attract the electorate with irreconcilable hatred of Ukrainian nationalists. Perhaps he could even have been able to build on this his election platform - at least some kind of capital against the backdrop of a series of colorless talking heads. At the same time, Berdichevsky regularly brings in - he speaks much faster than he thinks.

The rest of the figures in the public space are either little-known, or cause a certain rejection in connection with frequent scandals and the work of the structures entrusted to them.

In any case, there are very few state people in the LPR who would be radiant with charisma and evoke positive emotions among the masses, and this is especially true for the already acting people's representatives.

The only exception is the deputy of the People's Council of the DPR Anastasia Selivanova, whose active work made it easier for many residents of the republic to obtain republican documents and Russian citizenship. To be honest, this is scanty capital, but others don't even have that.

Little better, to admit, the situation in the camp of the so-called opposition, headed in the DPR by ex-speaker of the People's Council of the Republic, Andrei Purgin, and in the LPR by activist Anastasia Pyaterikova.

For several months now they have been trying to register a public organization (apparently with the aim of later turning it into a party), but they are predictably denied registration.

Another blow was the loss of a faithful ally - the Donetsk blogger Roman Manekin, who was detained before the New Year after screenshots appeared on the network, allegedly indicating Manekin's attempts to do business with Kiev. It's too early to talk about the credibility of the accusations, but even if the accusations turn out to be false, the blogger's nerves will be worn out pretty much.

However, all this is secondary. The main problem of the Donetsk-Luhansk opposition is the complete absence of any program of action. The only thing they can offer to the electorate is their own candidacies to replace Pasechnik and Pushilin.

Timid attempts to publish their recipes for a brighter future were justly ridiculed, as they boiled down to

"Inheritance of the experience of the Donetsk-Krivoy Rog republic"

It is clear that criticism of the authorities resonates in the hearts of voters, but the program

"Choose me and everything will be fine at once"

looks not too attractive.

In addition, deprived of access to the main channels for disseminating information, the opposition is forced to be content with the audience of social networks and Telegram, several controlled Internet resources and rare attention of more or less major newsmen. And this gives insignificant coverage in comparison with those mouthpieces that are available to government officials.

The problems are added by the ambiguous past of Pyaterikova and Purgin, as well as their consonance with Ukrainian propaganda. Enemy media simply adore their publications and at some point it may seem that they are doing a common cause. At the very least, opponents will definitely paint the situation in this light.

If in Lugansk everything is very similar

"My own party",
which can be contradicted, but not for long, in Donetsk there is still a certain illusion of pluralism, provided by the activities of persons who do not belong either to the opposition camp or to the party in power.

This is conditional, since in the power itself in the DPR there is an intense struggle of at least three factions, so that there is no single "party".

Personalities such as Igor Khakimzyanov (he was the DPR defense minister for several days in 2014), ex-commander of the Vostok battalion Alexander Khodakovsky, the leader of local communists Boris Litvinov and several other more or less recognizable persons regularly appear on social networks and in the media. who, in theory, could take part in the elections.

All this, however, is not serious (the Donetsk leftists were wiped out of power in November 2014 and are unlikely to be allowed to return), except for Khodakovsky, who is active in social networks. He is the only easily recognizable commander of the "first". And it is quite capable of competing for this or that post. However, a big problem for Alexander Khodakovsky was and will be the unexplored attempt to storm the Donetsk airport on May 26, 2014, during which dozens of militias from the Iskra unit were killed.

To this day, many are eager to ask about this from Khodakovsky, who, moreover, was periodically in difficult relations with the late head of the DPR, Alexander Zakharchenko. So with a high degree of probability it can be argued that social networks will remain the lot of the ex-commander.

The reality is that today in the LPR there are no public figures who could seriously count on the support of the population. The era of heroes is over, modern commanders are unknown, oppositionists are toothless, and officials and ministers are justly blamed for the hardships of life in the republics and for many local troubles and troubles.

Everyone has something to ask for, no one evokes an unambiguously positive reaction and sympathy. In addition, a big problem is the incompetence of the potential candidates themselves - what can I say if in Lugansk and Donetsk there are only a few deputies of the People's Council in sight, while the rest do not seem to exist?

All this suggests that in the event of elections, the situation will develop according to the previous patterns - there will be the only true candidates, whose victory will be ensured by all possible and impossible means, and several extras. And the rest will have to cry on social networks about how their

“They didn’t allow it and hurt”.
It is quite possible that there is simply no other way out. And if the republics are given complete carte blanche for absolutely democratic elections, chaos will begin in the style of the 90s.

Well, the most fantastic scenario is the holding of elections under Ukrainian law under the control of the OSCE and in the presence of representatives of the Ukrainian CEC.

Today it looks like an impossible task. (How to ensure the safety of candidates from the territory controlled by Ukraine and their assistants? How to track the SBU agents among all these people?) Therefore, it is extremely difficult to make any predictions.

However, this does not affect the unattractiveness of local candidates and the absence of strong, charismatic politicians.

At the same time, it should be admitted that if elections take place under Ukrainian law, it is safe to say that the local population will vote, first of all, against candidates from Ukraine (if they are allowed). And they will choose anyone, if only from the locals.

However, this is a topic for a separate study.

Ctrl Enter
Noticed oshЫbku Highlight text and press. Ctrl + Enter
We are
Interview of V. Putin to Channel One and the Associated Press AgencyWhat you didn't want to know about England
Military Reviewin Yandex News
Military Reviewin Google News
39 comments
Information
Dear reader, to leave comments on the publication, you must sign in.