50-round pistol that leaves no chance for body armor 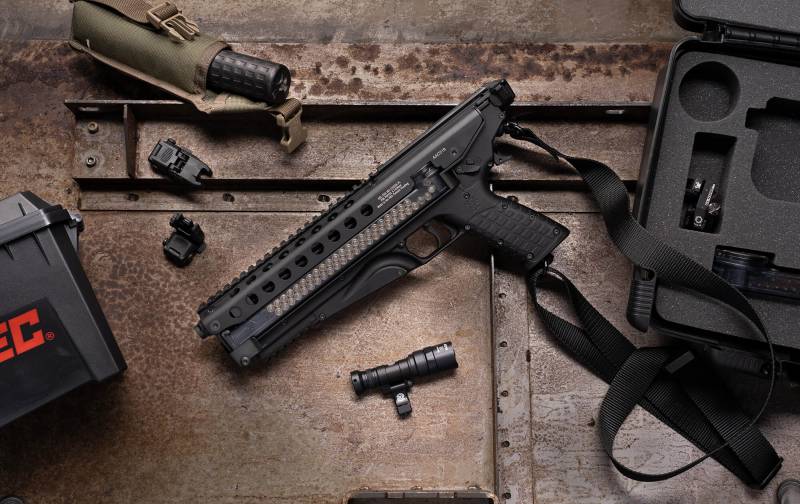 The American company Kel-Tec is famous for its unusual developments in the field of small arms weapons... One of the latest developments of the company is the Kel-Tec P50 pistol for the magazine from the FN P90 submachine gun, designed for 50 rounds.

A special feature of the new weapon chambered for 5,7 × 28 mm SS190 is its high penetration and compactness. In fact, we have before us PDW - a personal self-defense weapon in the western classification, but in the form factor of a pistol and with very small dimensions.

The P50 trademark was registered by the company in February 2020, and the first images in the press appeared in December last year. The manufacturer himself calls the new model

"The most unique piece in the entire Kel-Tec range."
Kel-Tec expects to begin deliveries of the new model of small arms in the first quarter of 2021. The MSRP for the P50 starts at $ 995 for the American market. In addition to the pistol, the delivery set will include two magazines for 50 rounds.

A special feature of the new pistol is the selected cartridge and magazine for it.

In fact, we have before us a reduced sample of rifle caliber cartridges, and not a classic pistol cartridge. The 5,7 mm ammunition was developed in the early 2000s. In 2002 and 2003, experts from a number of NATO countries conducted a series of tests in order to find a new cartridge for personal self-defense weapons and its further standardization. The new cartridge was supposed to replace the 9mm Parabellum cartridge (9x19 mm), which is widespread throughout the world.

Two main ammunition participated in the tests: 5,7x28 mm from Fabrique Nationale and 4,6x30 mm from Heckler & Koch. The first is used in the FN P90 submachine gun, the second in the HK MP7 submachine gun. Both models are currently mass-produced small arms. 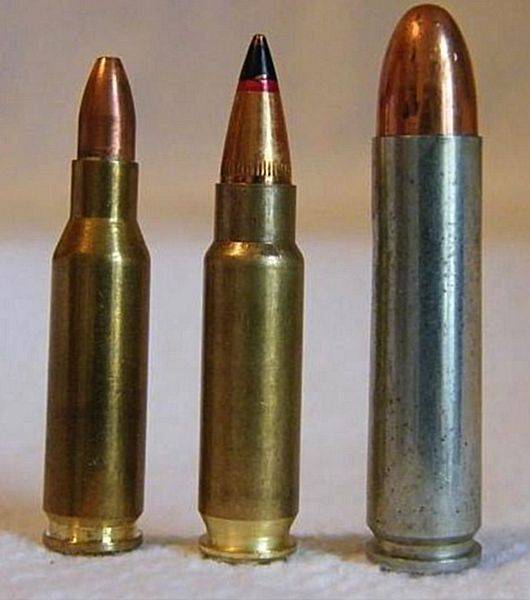 A group of experts from the USA, Canada, Great Britain and France came to the conclusion that the effectiveness of the 5,7x28 mm cartridge at unprotected targets is 28 percent higher than when using the 4,6x30 mm cartridge. In this case, the action of cartridges against protected targets turned out to be equivalent.

To roughly imagine the level of effectiveness of the new cartridges, it can be noted that the 4,6x30 mm cartridge turned out to be 2,5 times more effective when firing at targets in body armor than the 9x19 mm MP5K cartridge with half the recoil.

It is reported that at a distance of 150 meters, a bullet of a 4,6x30 mm cartridge is guaranteed to penetrate a 1,6 mm thick titanium armor plate, as well as a standard body armor set by NATO CRISAT requirements.

The requirements of this standard take into account that the bullet does not just pierce the body armor, but it is also guaranteed to disable manpower. The standard sets an infantry target in body armor. The protective elements of such a body armor are represented by titanium plates with a thickness of 1,6 mm, on the back side of which there are 20 layers of aramid Kevlar fabric.

When developing the standard, NATO focused on body armor of the former Warsaw Pact states and the Russian Federation, including GRAU 6B2 and 6B5-1. The SS190 cartridge 5,7x28 mm with an initial flight speed of 715 m / s at a distance of 200 meters pierces 48 layers of Kevlar, as well as steel and Kevlar helmets.

50-charge magazine
Germany insisted on adopting its own ammunition, so there was no general standardization in NATO.

Different countries of the alliance, depending on personal preferences, use today both cartridges and samples of weapons for them. Both ammunition is highly effective against shielded targets.

In this regard, the Kel-Tec P50 pistol took over all the positive aspects of the new cartridge. At the same time, the weapon retains almost all the ballistic characteristics of the FN P90 submachine gun, since the barrel length of the model is only 12,5 mm less.

A characteristic feature of the Kel-Tec P50 pistol is the magazine, which the weapon inherited from the Belgian FN P90. A special store was specially designed for this submachine gun and on March 6, 1990, a special store was patented in the USA. On a submachine gun, it was installed directly on top of the receiver, while its capacity was 50 rounds.

A distinctive and unique feature in addition to the capacity is that the cartridges in the magazine are located horizontally, perpendicular to the barrel of the weapon. Before being fed into the chamber, a special mechanism turns them 90 degrees. Another specific feature is that the magazine is made of transparent impact-resistant plastic, so that the shooter can always see how many cartridges he has in stock.

Features and capabilities of the Kel-Tec P50 pistol

Currently, specialists from the American company Kel-Tec have already revealed a number of tactical and technical characteristics of the new pistol.

It is known that the model uses 5,7x28 mm cartridges, the magazine capacity is 50 rounds. The weapon is made in the form factor and design of pistols, albeit a fantastic appearance, but a little heavy for standard samples of short-barreled weapons.

Kel-Tec P50 pistol. Left view
In terms of its size, the weapon turned out to be not so compact, although it certainly surpasses all PDW models in weight and dimensions. There is even the option of using a belt with a pistol.

In addition, the weapon received a fairly long barrel, which is only 12,5 mm inferior to the barrel of the FN P90 submachine gun. For pistols, this is a very high figure, the Fabrique Nationale company produces the FN Five-sevenN pistol chambered for 5,7x28 mm, but its barrel is exactly two times shorter (122 mm versus 244 mm for the P50).

The Kel-Tec P50 pistol is equipped with an automatic blowback mechanism. The barrel and bolt of the pistol are in a separate receiver made of high-strength aluminum alloy. The shutter is mostly located above the barrel of the weapon inside the receiver, the designers placed two return springs under the barrel. The receiver of the P50 pistol in the front is pivotally connected to a plastic frame on which the classic pistol grip and trigger guard are located.

Kel-Tec P50 pistol. Right view
In the rear, the receiver and the frame are rigidly connected to each other by a latch, the lever of which was placed by the designers above the rear of the pistol grip.

By pressing the latch with the thumb of the holding hand, the shooter with the other hand can easily lift the rear of the receiver up and forward. So he will open for himself access to a long window for placing a 50-round magazine with a transverse arrangement of cartridges relative to the weapon barrel and a built-in swivel ammunition ramp.

The magazine of the pistol is located in the window so that the rotary ramp is at the back, and the feed window for cartridges is at the top. The receiver is lowered and snapped on top of the magazine, so that the 50-round magazine is under the barrel of the weapon. When firing, the casings are thrown to the right and up through the window located at the rear of the receiver.

The model is equipped with a single action trigger with a hidden trigger. On both sides of the frame above the fire control handle are manual safety levers. A standard Picatinny rail is integrated into the top of the receiver, which makes it possible to use low-magnification collimator or optical sights with weapons. The bar also integrates classic open-type sights.

Prospects for a new model

American journalists are ambivalent about the prospects for the new Kel-Tec pistol in the civilian market.

Of course, the P50 pistol can be used for personal self-defense, home protection, recreational and sports shooting, or even for hunting small game. However, in all the above niches, there will definitely be more convenient and, what is especially important, much cheaper competitors for him.

It is unlikely that you will need a pistol for 50 rounds, capable of hitting targets in body armor. Although they have become more and more common in recent years, including outside the army and special services.

Kel-Tec P50 pistol
American journalists writing about weapons believe that the novelty will flirt with a civilian audience with its unusual appearance, taking not so much functionality, which for many is simply redundant, but the so-called

"Wow effect".
Indeed, the Kel-Tec P50 can impress a person.

This is not the boring and familiar Glock or Colt. Outwardly, a 50-round pistol looks more like a weapon from Hollywood films about the future. However, it is too early to judge the prospects of the model in the civilian market, since sales of the new item have not even begun yet.

For the civilian market, the model certainly looks niche. Since few people are vitally interested in breaking through modern body armor and in hitting protected targets.

But the P50 pistol may interest law enforcement agencies and the military even in this form.

There is definitely a use for a pistol. Considering the better compactness and weight compared to traditional submachine guns (PDW). At the same time, if necessary, Kel-Tec specialists will be able to provide a body kit for the pistol. Including a stock that can adapt it into the most compact self-defense weapon that can be used to arm pilots or tankers.

At the same time, there is no need to sacrifice either ammunition or ballistics. You don't even have to add the ability to automatically fire or fire with a cutoff of several rounds.

Although in the future, the company will most likely be able to implement this function as well.