Heraldry: insignia and minor lines of the genus 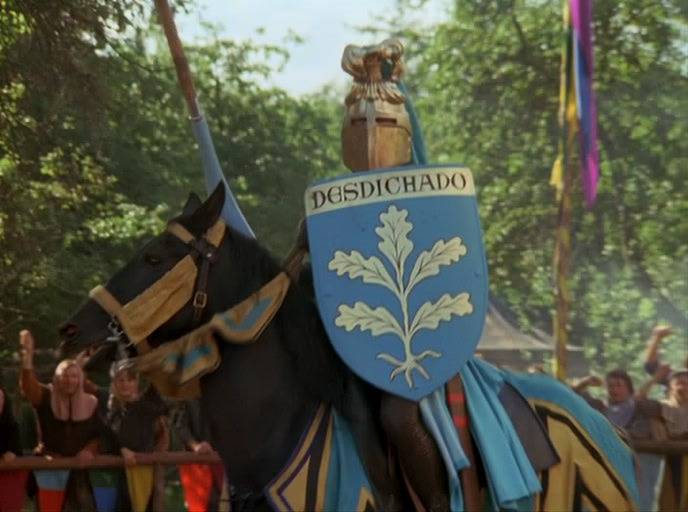 The coat of arms of "disinherited". A still from the 1982 movie "Ivanhoe". But the book says that the inscription is below?

“He wore a steel carapace with a rich gold notch: the motto on his shield depicted a young oak, uprooted; beneath it was an inscription in Spanish: "Desdichado", which means "Uninherited." He rode on an excellent black horse. Driving along the galleries, he bowed his spear with a graceful movement, greeting the prince and the ladies. "
("Ivanhoe" W. Scott)
Coats of arms and heraldry. Many of the readers of VO, who turned their attention to the "stamp series" of articles, asked questions about how exactly the coats of arms of the sons and daughters of the armigers differed if they received them while their father was still alive. And after his death, were there any changes to their coats of arms?

It is believed that "raison d'etre", that is, the way heraldry survive for centuries, is associated with its ability to glorify the personality of any individual with such visual means and in such a way that its coat of arms can be considered as a kind of passport of the bearer or even its pictographic characteristic.

For example, a red palm sign painted on a warrior's shield or on his body meant that he had killed an enemy in hand-to-hand combat. A horizontal line - made a ku, a horseshoe - stole a horse. And in the same way, during the heyday of chivalry, the sovereign lords did the same, putting their coat of arms on the shield, and on the surcoat, and on the horse blanket. And they also had them on the helmet, saddle, pennant, and even on the dresses of their wife and daughter. 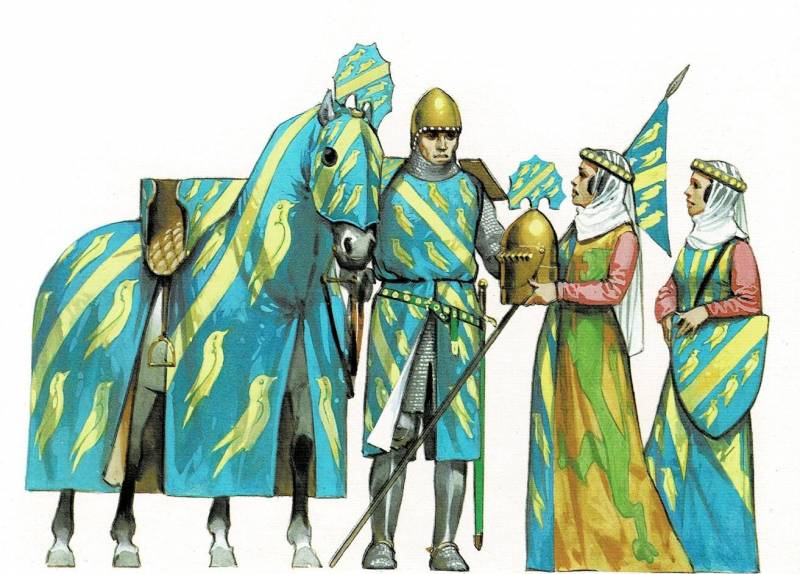 Reconstruction of Sir Geoffrey Lutrell's coat of arms from the famous Lutrell Psalter.
Illustration from the book D. Nicolle Medieval Knights, p. 14 / fig. Angus McBride
Interestingly, we find something similar in the culture of the Indians of North America.

At the same time, each country had its own heraldic rules and institutions. So, for example, in Poland, one coat of arms could be used by many families, and not directly related to blood, since it was permissible for the entire clan to use it.

In some countries, personal coats of arms differ only when it comes to the coats of arms of the branches of royal houses. In Scotland, families amend their coats of arms through the court of Lord Lyon. And there are special distinctive emblems known as "line of the younger generation" or "decals".

Some "moments" in heraldry may well become a pretext for accusations of the most blatant gender discrimination. For example, daughters are not considered as significant in her as their brothers. In the same England, very little attention has been paid to them in heraldry until now. Except when only they became heraldic heirs.

Even when the family had several daughters, and there were no sons, they did not have any special distinctive symbols of the younger generation in their coats of arms, and everyone received the coat of arms of their father.

In the Iberian Peninsula, however, the situation is completely different. There, the female part of the family is as important as the male part. And in Portugal, any family member has the right to choose the surname and coat of arms of any side of the family he likes at will, and the system of distinctive signs indicates from the parents or great-grandfathers this coat of arms was received (or rather, chosen). 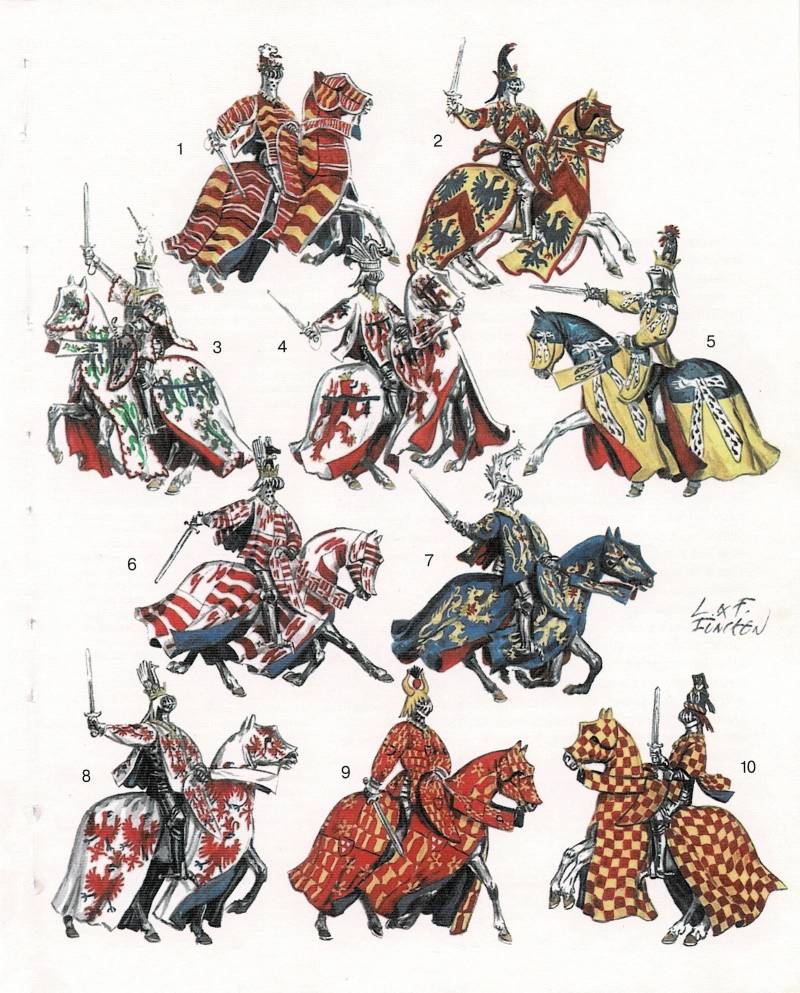 It is clear that all this comes from the past, when the feudal lord, as the owner of lands and estates, tried (since it was in his power) to give birth to as many sons as possible. And the daughters were considered then as an "object" undesirable, because they had to be given a dowry for them.

True, through the marriage of daughters it was possible to profitably become related with the "senior in rank." That is, the baron could marry his daughter to the count or duke. And, although this business was expensive for the wallet, from the point of view of "patronage", having a son-in-law of an older and wealthy senor was very profitable. The main thing here is that the daughter is a beauty. Because beauty is also capital. But for the ugly one, both land and castles had to be given more ...

In the book "Heraldry" by John Gillim (1724), it was indicated that the emblem of the first son could be "lambel". The second son in the qualifiers was assigned a crescent with horns up, the third - a star, the fourth - a merlet, the fifth - a ring and the sixth - a lily. And traditions, again, were different here.

For example, in Boulogne, the count himself meant the image of the sun, which could be placed in the upper left corner ("free part"), the crescent symbolized his second son, the star - the third, and the bird - the fourth. 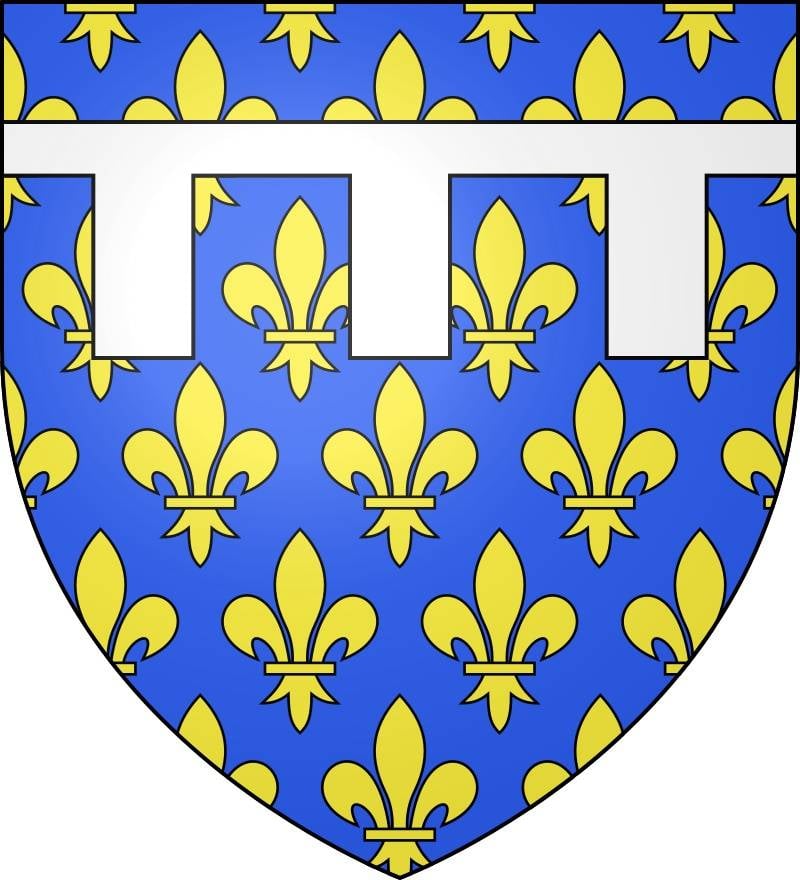 Coat of arms of the Dukes of Orleans from the House of Valois
The most important and most often used to designate the coat of arms of the eldest son and heir, however, was the so-called "lambel" or "tournament collar".

This detail was characteristic of many English families. For example, for members of the Courtenay family from Devon. It was also used in heraldry in Scotland, France, Spain, Portugal, Belgium and Italy.

Insignia of the Courtenay family of Devon
The origin of the lambel has long been a mystery.

Until he was found on the shield carved into stone by an English knight of the XNUMXth century (probably Sir Alexander Giffard) in Boyton (Wiltshire).

The Giffard coat of arms depicted three silver leopard lions walking on a scarlet field. Lambel on it looked like a rope stretched over the top heraldic figure. Ribbons are attached to the rope. And at this early stage, it seems that their number does not really matter (there are five such ribbons on Sir Alexander's shield).

That is, the lambel could initially represent a restrictive rope on the tournament field with ribbons hanging from it. And already later in the image, its thickness was equal to the width of these ribbons.

The effigy of Sir Alexander Giffard 1262
However, at the end of the XNUMXth century, the number of ribbons in lambel was already fixed. And only three ribbons (or "points") are depicted on it. This is exactly what is carefully engraved on the tombstone at Boyton, and the contrasting roughness of the lambel clearly indicates the conscious temporality of this figure. Apparently, the eldest son had to remove this lambel, becoming the head of the family.

Another effigy with lambel: Richard de Croupe 1278
As for the seniority of the other sons (from the second to the ninth), each of them had their own signs. However, there was no specific rule for their use, other than their location: usually in the center of the head of the shield. It was possible for great-great-grandchildren to place their own signs on another sign of the previous younger generation, and so on.

But since the sign became less and less each time and therefore more useless, then we can say that historically it happened so that these signs were limited to one family and no more.

And we can speak in a very definite way about the absence of any common sense in the need to have signs of the younger generations in the family coat of arms. 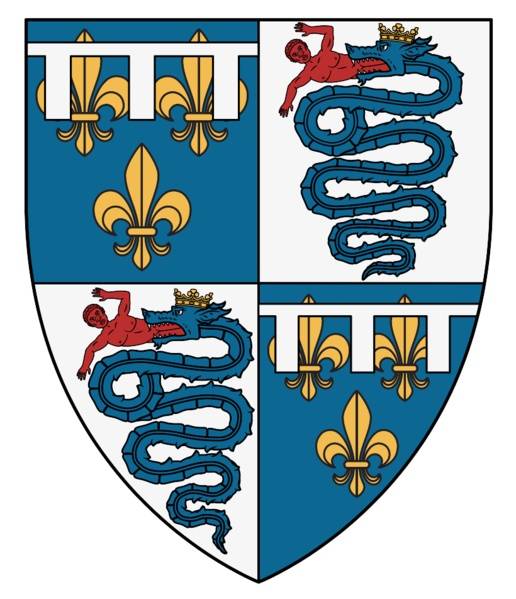 The coat of arms of Charles, Duke of Orleans, Comte de Blois, de Dreux and de Courtenay, a participant in the Battle of Agincourt, is very interesting. This coat of arms is a typical consequence of the diplomatic alliance and the corresponding marriage: the Visconti dragon in it is adjacent to the royal lilies of France and the lambel of the eldest son. 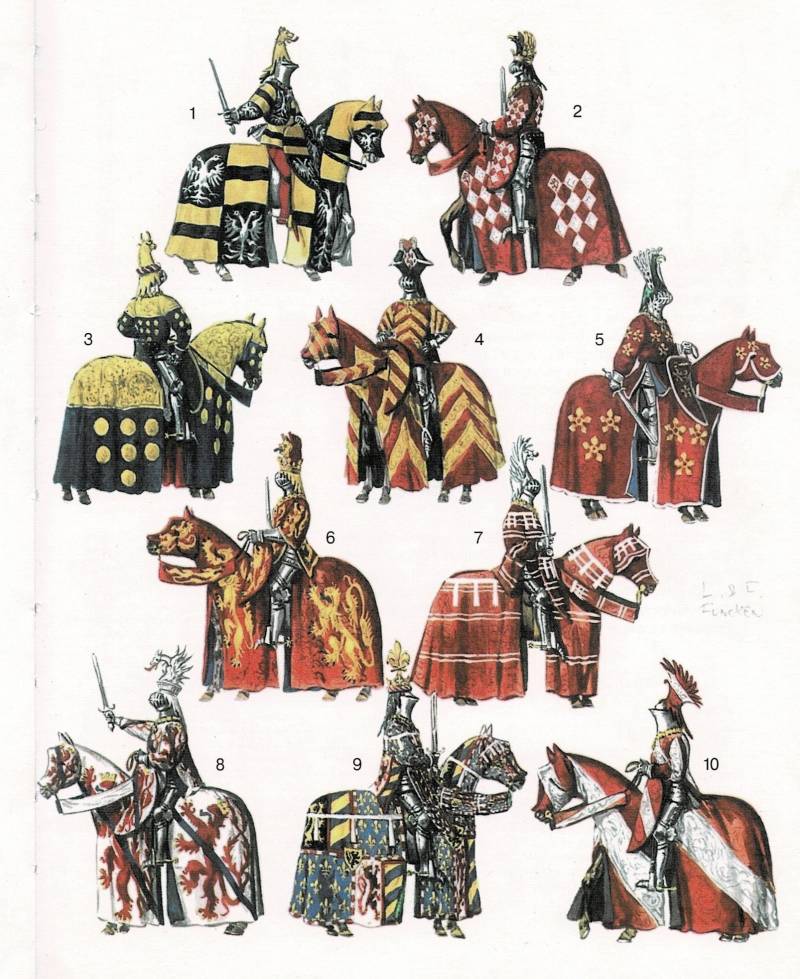 Coats of arms and coat of arms for the tournament: 1. Friedrich, Count of Mer. Four-part coat of arms; in the 1st and 4th quarters, on a black field, there is a silver two-headed eagle with a golden beak and claws; in the 2nd and 3rd quarters on a gold field, a black belt. 2. Simon de Lalen. On a red field there are ten silver rhombuses, the first one is encumbered by a red lion cub. 3. Jean de Melun. A blue field with a gold head and seven gold bezants - three in the top row, three in the middle and one in the bottom. 4. Jacques Crevecourt. There are three golden rafters on the red field. 5. Jean de Vergy. On a red field with a silver border, there are three gold five-leaf leaves with an empty center. 6. Guy de Pontaye. On the red field is a golden lion, rebelling with red claws and tongue. 7. Bodo de Noyel. On the red field there are three doubled silver belts, broken in three by a silver lambel. 8. Jean de Luxembourg, bastard of Ofeurden. In a silver field, a red lion, rising with a double oblique tail, a golden crown and claws, and a blue tongue, a narrow band of an azure side line. 9. Charles of Burgundy, Count of Charolais. The large Burgundian coat of arms is complemented by a lambel of the eldest son with three “points”. 10. Thibaut de Neuchâtel. On the red field there is a silver sling to the right.
Illustration from the book by Liliana and Fred Funkenov “Encyclopedia of weapons and military clothing. Middle Ages. VIII-XV centuries: Armor and weapons. Fortresses and siege machines. Knightly tournaments and emblems. M .: Astrel, 2002, p. 107
Today, married English women may well (if they want) use their own coat of arms, instead of, as before, be sure to take the marriage one. But to show that it is her own coat of arms, a small blank shield is included.

For example, here is how it is done in the coat of arms of Margaret Thatcher. The bearers of the coat of arms are the figures of the Royal Admiral fleet (symbol of the victory in the Falklands War, which happened during her premiership) and Sir Isaac Newton, as a person who recognizes her early scientific career.

The images of the key and the two royal lions speak of her tenure as prime minister and first lord of the British Treasury. The Golden Tower is a sign of her tenure at Westminster Palace as a Member of Parliament.

At first, the shield was diamond-shaped (traditional for women), but then changed and surrounded by the hoop of the Order of the Garter (which she was awarded in 1995). Below is the insignia of the Order of Merit and the motto on the ribbon: 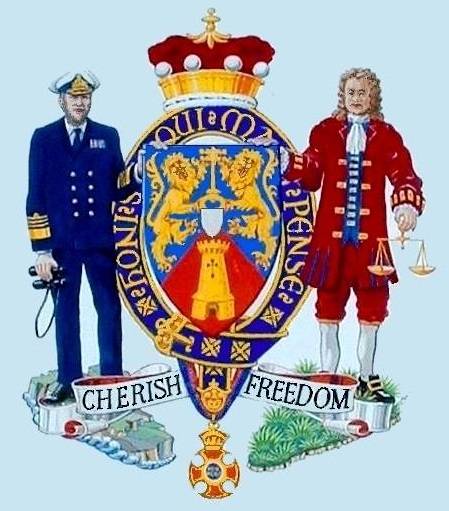 The author and administration of the site express deep gratitude to the British organization "The Medieval Combat Society" for the photos of the effigy provided.

Author:
Vyacheslav Shpakovsky
Articles from this series:
Heraldry: lions, eagles, and bonacon
Coats of arms: form and content
Where did the coats of arms and the science about them come from?