The scale of Stalinist repressions: myth and truth 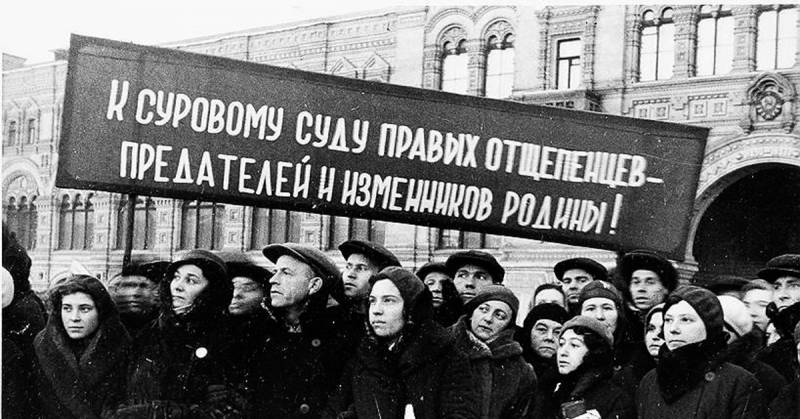 One quote prompted me to search for real numbers. Strange as it may sound, but these were the words of not anyone, but the main demon of repression - Adolf Hitler.

Compliment from the enemy

In one of his interviews on the eve of the finale of his last battle with Russia, this openly hostile character noted:

“The Wehrmacht just betrayed me, I am dying at the hands of my own generals.

Stalin did a brilliant act by organizing a purge in the Red Army and getting rid of the rotten aristocracy. "
(End of April 1945. From an interview with A. Hitler, taken from him by journalist K. Speidel).

For various ideological reasons, politicians took the very topic of the scale of Stalinist repressions beyond the boundaries of good and evil.

Among other things, this issue was also expelled from the field of real public discussion also due to the myth of the cult of the individual, which was inflated to universal proportions, which was exploited in many ways, purposefully and effectively by different historical persons and clans.

For example, one of these was Nikita Sergeevich Khrushchev. 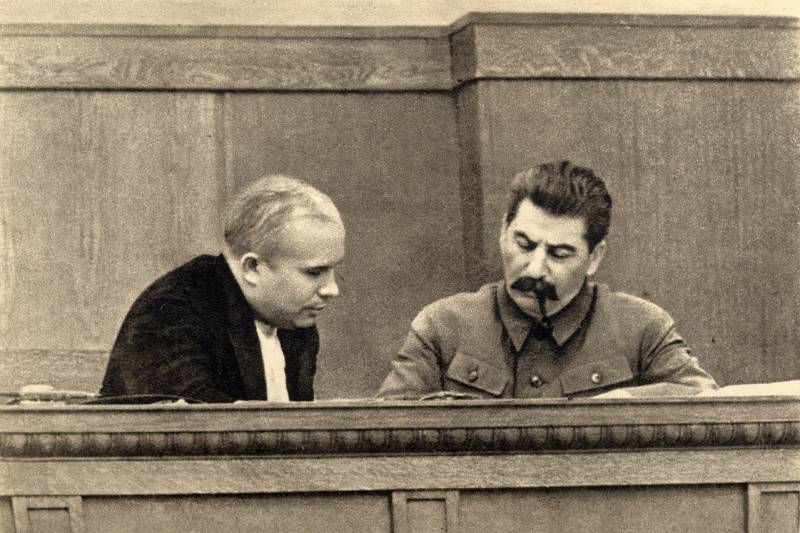 I.V. Stalin and N.S. Khrushchev. January 1936 Photo: Wikipedia
In fact, he covered his own responsibility for his personal contribution to the cause of repression with nothing more than campaigns to expose Stalin's personality cult. Blowing up the bubble about the magnitude of the Stalinist purges was a wonderful tool that worked primarily as an ideal shock therapy for the people. But in fact, all this was only a screen for strengthening Khrushchev's own power. A smokescreen to legitimize Khrushchev's methods and means of governing the country.

A little later, in the 1960s-1970s, the same tactic, with screams of gigantic repression and the cult of personality, worked against Khrushchev himself.

But in the 1980s and 1990s, the same principle was revived again. The multi-headed dragon with the theme of countless Stalinist purges was taken out of the chest again. Now in order to overthrow the Communist Party first. And then with the aim of destroying the country itself - the Union of Soviet Socialist Republics.

All this suggests that we have met with some kind of social technology or even with social engineering for mythologizing and constructing reality. And if so, then the question naturally arises:

"And what was the real concrete number of the repressed?"
Let's try to see at least some specific numbers behind the tinsel about the countless victims.

And, forgive me, for this, alas, quotes from world-famous opposition writers about the alleged tens of millions who were shot and executed in the USSR are not suitable. Let's not take their word for it. Let's turn to specific documentary facts.

Here is one of the interesting archival documents, which was previously, of course, top secret (and today published in the public domain), with a long name:

“Memorandum of the Prosecutor General of the USSR R.A. Rudenko, Minister of Internal Affairs of the USSR S.N. Kruglov and the Minister of Justice of the USSR K.P. Gorshenin on the number of those convicted by the OGPU collegium, NKVD troikas, Special meeting, military collegium, courts and military tribunals for counter-revolutionary activities in 1921-1954. " // GARF. F. 94016. Op. 26. D. 4506. LL. 30-37. Certified copy. 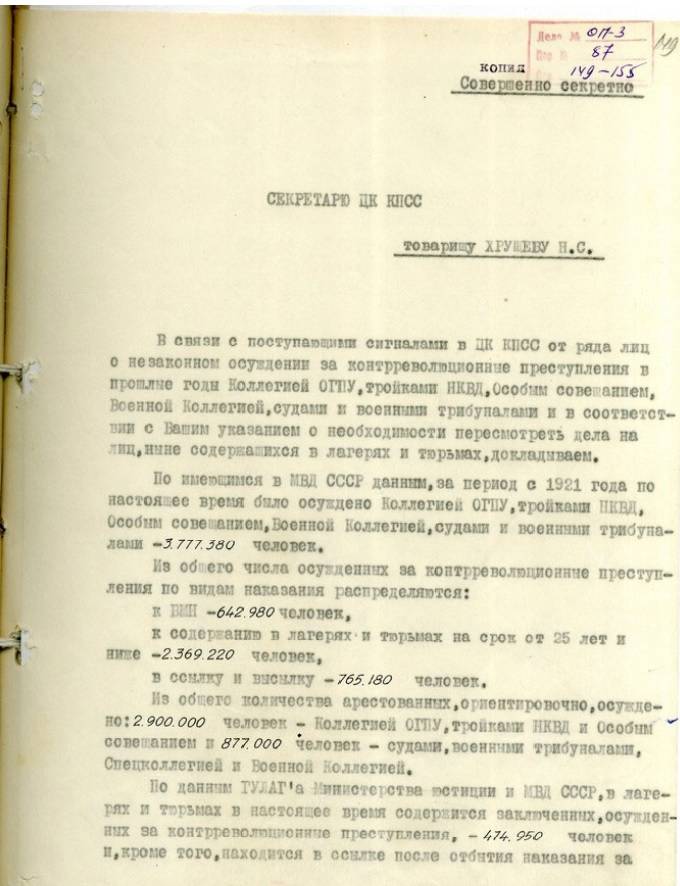 This document is dated, according to archival data, on February 1, 1954.

This statement was prepared for the head of state. And it named the numbers of the repressed for a period of 32 years. Namely, from 1921 to the date of the report, in other words, on February 1, 1954. 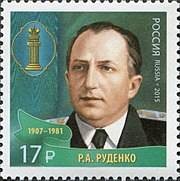 Postage stamp of Russia with the image of R.A. Rudenko. Photo: Wikipedia 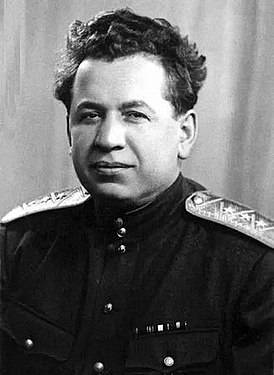 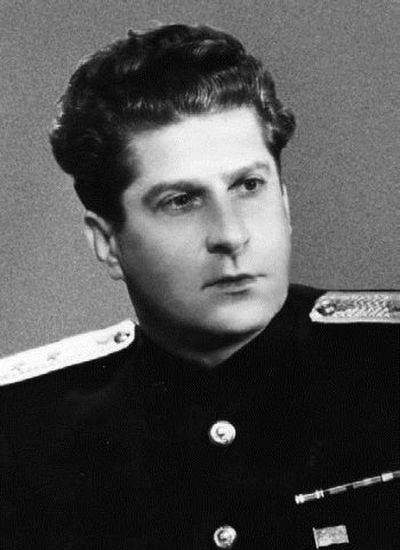 K.P. Gorshenin (1907-1978) Photo: nbchr.ru
This document testifies that the total number of convicts for 32 years was 3 people. The charges were made by the OGPU Collegium, the NKVD Troika, the Special Meeting, the Military Collegium, courts and military tribunals combined.

The numbers are great. Agree.

But they contain data for more than 3 decades. It was an extremely difficult and contradictory period in the life of our country.

These numbers include revolutionaries, Leninists and Trotskyists, as well as other destroyers of the Russian Empire, who smashed the great country to please the West. The victims of the Civil War were also included here. And all the traitors who served Hitler during the Great Patriotic War.

Of course, among them were outright bandits, Bandera, deserters and even terrorists.

Let's repeat. The main figure from this document is that 32 642 people were sentenced to death for all 980 years.

A giant figure. But these are far from the "tens of millions of those shot" that are so persistently trumpeted to us from the West, is it not?

The difference between ten million and almost 643 thousand is an exaggeration of at least 15 and a half times.

The people need to know the historical truth. Even though she is harsh.

So, let's calculate how much this was on average for the year. If we divide the total number of those executed by all the reporting 32 years, it turns out that an average of 20 were sentenced to death per year.

If this number is compared with the opposition version of "tens of millions of those executed", then this is an exaggeration of almost 500 times (497,7). That is, they lie to us on a XNUMX-fold scale. And we must write about it.

To remember the truth. A historically recorded fact: on average, a little more than 20 thousand people received a death sentence per year. It's cruel. But it is this figure that you should know. This is as important as pure documentary truth.

But all the songs of the West and Westerners about tens of millions of those executed in the USSR are a lie. Impudent and impudent.

Today it turned out that the values ​​printed in this magazine (and immediately reprinted by many media outlets) values ​​of 40 allegedly killed Russian officers, and even in just a little over 000 years (from May 2 to September 1937) are also exaggerated.

Well, let's imagine how this could be printed?

There was such a document "Report on the work of the department" for 1939, compiled by the head of the Main Directorate of Personnel of the People's Commissariat of Defense, Lieutenant General Efim Afanasyevich Shchadenko. 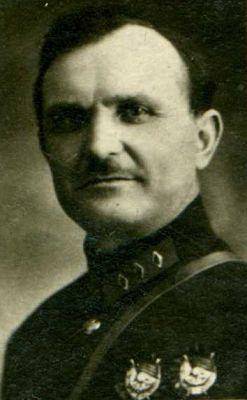 E.A. Shchadenko is the chief personnel officer of the Red Army. Photo: maxpark.com
On May 5, 1940, this paper was put on I.V. Stalin. (The text of the document "From the report of the head of the Department for the commanding staff of the Red Army of the USSR People's Commissariat of Defense E. A. Shchadenko dated May 5, 1940" was published in the journal "Izvestia of the Central Committee of the CPSU" in No. 1 for 1990, pp. 186-192. Link).

So, it was in this very paper that this figure was. Which was cynically taken out of context and then waved like a red banner.

But back to the above document.

Once again, I would like to draw your attention to the fact that so many were fired. And not at all shot or killed.

Looking ahead, we note that the executed officers were also among the dismissed. But only 17 people. By the way, in percentage terms, this is only 0,05% of all dismissed commanders (36) during this period.

But first, let's get back to the numbers about the dismissed. Here's how the statistics of those expelled from service looked by years:

- according to the age;
- for health;
- for disciplinary offenses;
- for moral instability;
- for political reasons.

Of the total number of all dismissed officers (36), 898 were “removed” from their offices for political reasons. That is, there were many political dismissals - 19%.

At the same time, in the published document, the compiler also openly states that most of these dismissals were incorrect:

“In the total number of those dismissed both in 1936–37 and in 1938–39. a large number were arrested and dismissed unfairly. Therefore, there were many complaints to the People's Commissariat of Defense, to the Central Committee of the All-Union Communist Party of Bolsheviks and to Comrade Stalin.

I (E.A. Shchadenko) in August 1938 created a special commission to analyze the complaints of the dismissed commanders, which carefully checked the materials of the dismissed by calling them personally, leaving the employees of the Directorate to their places, requests from Party organizations, individual communists and commanders who knew the dismissed, through organs of the NKVD, etc.

The commission considered about 30 thousand complaints, petitions and applications ”.
Therefore, in 1938-1939, out of the above 19 106 “political” officers (thanks to the submitted petitions and complaints, as well as during the initiated inspections), 9 247 officers were reinstated in their rights. In percentage terms, this is 48,4% or almost half. And this is very important.

Since for political reasons, at first almost 50% were dismissed, but then almost half of them (25%) were reinstated.

Thus, of all those dismissed for political reasons and not reinstated, only 25% or only a quarter remain. That 40 thousand people are far from being initially discussed, you must agree.

And now the most important thing.

In the literal sense, it was repressed or specifically arrested, according to this released document, of all the dismissed military leaders - 9 people. This is 579% (from 25 36).

And the saddest thing.

Of all the arrested commanders, only 70 officers were sentenced to death.
And only 17 were shot.

As a rule, these were the most senior. Out of five marshals - 2. This is Tukhachevsky, as the organizer of the Trotskyist military conspiracy. And Yegorov, who was accused of being counter-revolutionary as a participant in espionage, as well as for preparing terrorist attacks.

Marshal Blucher was arrested with the wording as a participant in a military-fascist conspiracy, which resulted in unjustified losses and the deliberate failure of the operation on Lake Hasan. He died in prison.

As a result, it should be recognized that the documented fact that from 1921 to 1954, 642 980 people were sentenced to death (in a third of a century) (an average of about 20 000 annually). In comparison with the mythical opponents declared "tens of millions of people shot in the USSR" - this is at least five hundred-fold exaggeration.

Let us remember that only 70 officers were sentenced to be shot.

And only 17 commanders were shot from those sentenced in the end.

Now appreciate the screams of the West and the opposition about 40 military leaders who were allegedly shot by Stalin in a couple of years. What is this, no matter how blatant lie? And undue exaggeration of facts by more than two thousand (000) times?

In fact, everything that we are discussing today is a tragedy.

But its scale is mythologized and literally turns into fantasies far from the truth. The facts indicate that the executed 17 people from the officers dismissed in 1937-1939 are 0,05% of those 40 who were removed from office during the specified period.

So who, one wonders, benefits from such an astronomical and almost a thousand-fold exaggeration of real numbers and documented texture today?

Exorbitant myth-making is uniquely beneficial only to those who are not satisfied with either the historical truth or Russia itself: the West and the liberal opposition.

But the common Russian people should know, remember, preserve and repeat this harsh truth about the history of our Motherland.

For the sake of great ancestors and in the name of our descendants.

Ctrl Enter
Noticed oshЫbku Highlight text and press. Ctrl + Enter
We are
Chernobyl notebook. Part of 3Myths of the Great Patriotic. Did Stalin have prostration in the first days of the war?
Military Reviewin Yandex News
Military Reviewin Google News
470 comments
Information
Dear reader, to leave comments on the publication, you must sign in.