And finally, completing this small study devoted to the hypothesis of the Slavic origin of the ancestor of the first Russian princely dynasty, it is necessary to mention one find that took place during an archaeological expedition to the Zemlyanoy settlement of Staraya Ladoga in 2008.


At one time, this find excited the scientific community, because it did not quite fit into the framework of the established ideas about the era under study. This refers to the discovery by the expedition of A.N. Kirpichnikov in the layers of the second quarter of the XNUMXth century, part of the casting mold, the so-called flask. 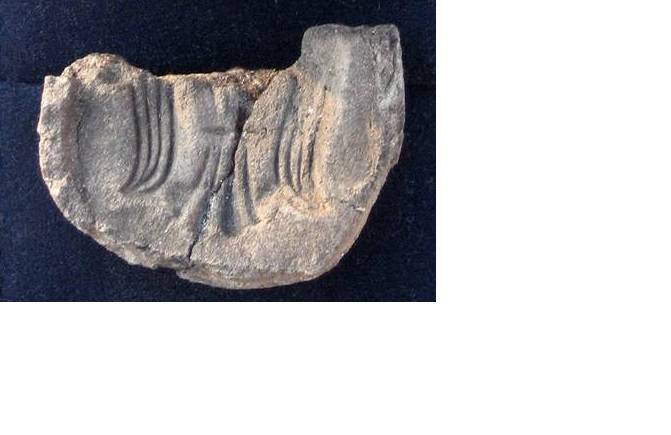 There is no doubt that with the help of this form the master tried to make a figure of a bird, very similar to the "Rurikovich falcon", as he is depicted on the modern coat of arms of the village of Staraya Ladoga in the form of a trident.

Such a find could testify to the actual and direct relationship of the sign of the Rurikovich with a falcon, which took place already in the XNUMXth century. And the first impression of this find was just that.

The information space literally exploded with headlines like "Archaeological sensation" or "The coat of arms of Rurikovich was found in Staraya Ladoga." However, the passions in the scientific community about this find quickly subsided.

If you look at the find calmly and impartially, its similarity even with the sign of Yaroslav the Wise (most similar to an attacking falcon) does not seem so obvious.

First, an attentive observer will immediately notice that the shape of a bird, molded in this shape, will be located with its head up, not down. That is, the falcon (if it really is a falcon) will not be "attacking", but "guarding".

And thirdly, and this is probably the most interesting thing. Historians, studying this find, according to their old tradition, began to look for something among the well-known and well-attributed artifacts that would allow to compare this find with it and draw any parallels that would allow a better understanding of the meaning of the find itself.

And almost immediately they found an image of a bird very similar to the one that should have come out of this box. Judge for yourself: 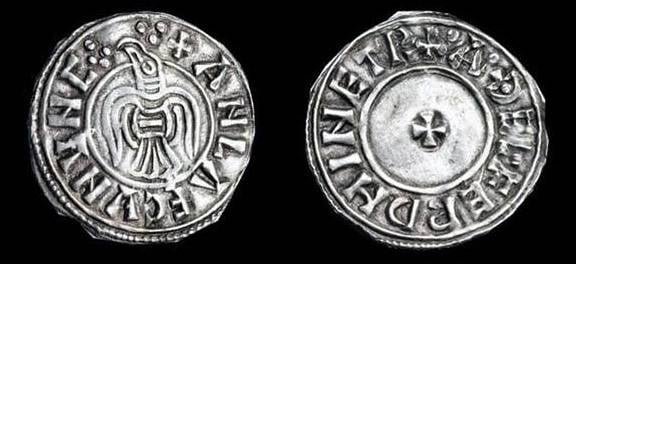 Before us is an image of a coin by Olaf Goodfritsson, King of Dublin and Jorvik from the times of Danish law (present-day York), a descendant of the legendary Danish king Ragnar Lothbrok. The coin was minted in the period 939-941. That is, it is a modern find of the expedition of A.N. Kirpichnikov.

Some researchers believe that the coin depicts a raven - a traditional sign of the Danish Vikings from the time of Ragnar Lodbrok. And, in general, a symbol characteristic of the Scandinavians (remember, crows are Odin's constant companions).

Others see in this figure an image of a hunting falcon, believing that a collar is depicted on the bird's neck, and this is a sign of a hunting, that is, a tamed bird.

However, both of them, one way or another, agree on one thing - the similarity of these two images is obvious enough that it (the similarity) cannot be simply dismissed.

Parallels are drawn. Let's see where these parallels lead us.

Olaf Gutfritsson spent virtually his entire life on the British Isles, cruising between Britain and Ireland. In Ireland (Dublin), he had domain possessions that had been conquered from the local population by his great-grandfather Ivar I, according to some reports, the son of Ragnar Lothbrok.

The entire life of the descendants of Ivar I was spent in the struggle for the kingdom of Jorvik in northern Britain. Now with the same restless Vikings, like themselves, now with the local Saxon nobility. They either managed to gain a foothold in this kingdom, then again they yielded to more successful rivals.

At the end of his life in 939, Olaf once again managed to reclaim the disputed kingdom. And it was during this period that he began to mint his own coin in it, a sample of which is before our eyes.

Given the undoubted Danish origin of Olaf Gutfritsson, the parallels drawn willy-nilly become Slavic-Danish and force us to return to the version of the Danish origin of the first Russian princes.

This refers to the alleged identity of the founder of the Russian princely dynasty, Rurik, with Rorik of Friesland (or Jutland).

By the way, Rorik's own uncle - Harald, who was even at one time the king of Jutland - was nicknamed Clack, that is, Raven.

Perhaps (I emphasize, perhaps) the master who created the flask, parts of which were found in Staraya Ladoga (by the way, traces of precious metals were found in it), wanted to cast the figure of a raven, not a falcon.

In general, the artifact found in Staraya Ladoga, in the opinion of most researchers, testifies more to the Scandinavian than to the West Slavic ties of this settlement.

A little more about falcons

In fact, falcon motives periodically manifest themselves in the Russian Middle Ages. It cannot be said that this topic was completely ignored by our ancestors.

One of the most characteristic examples of this kind is the so-called "Pskov tamga" of the 2008th century, found in the same XNUMX in the burial of a noble man in Pskov. Here is a drawing of it: 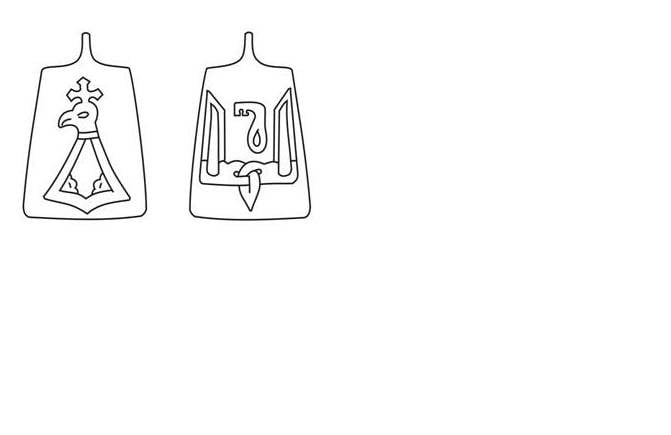 As you can see, on one side of the tamga there is a princely bident, presumably Yaropolk Svyatoslavich or Svyatopolk Yaropolchich, with a key. And on the other - a completely obvious falcon, crowned with a cross. That is, the falcon separately, the bident separately, without the slightest attempt to combine them.

Considering that such tamgas at that time were not just decorations, but were something like an official certificate testifying to the powers of its bearer, it can be assumed that one side of the tamga contained information about the bearer (falcon), and the other (the princely sign and key) confirmed his authority as a representative of the princely administration. And, possibly, it determined the scope of these powers.

In this case, it turns out that the falcon was a sign of a different, non-princely family, the representative of which was a buried man.

Let's summarize the general results of the study.

Even seemingly obvious evidence in favor of the connection between the Rurik dynasty and the falcon totem, in fact, gives us only additional grounds to state the already archaeologically confirmed links between the Old Russian and Old Danish states.

Thus, the main arguments presented in the works of the most consistent and authoritative "anti-Normanists" in favor of the hypothesis of Rurik's West Slavic origin must be rejected. The very same hypothesis (already weakly argued) is even more in need of additional proof.

However, in my opinion, those for whom the Slavic origin of Rurik and the glorious feats of arms of our ancestors are an urgent need, regardless of whether they actually took place or not, should not be upset.

To calm them down, I can inform you that Rarog - an ancient Slavic deity, which, according to beliefs, could really take the form of a fiery falcon - was a purely peaceful deity. Namely - the keeper of the hearth. It had nothing to do with feats of arms and military glory. And did not show any aggression. Unless, being angry with careless or impolite owners, he could burn down a house or a village - as necessary. Kinship with this deity delivers as much honor as, for example, kinship with a barn or a kikimora would deliver.

As for the cheer tribe. According to some researchers, they had something like a nickname - "reriki" (in fact, derived from the ancient German word for reeds or reeds, so only the German neighbors called encouraged), that is, supposedly falcons. But they, too, in general, have nothing to be proud of.

Like the other tribes of the Pomor Slavs, as well as parts of the Balts, they could not effectively resist the German aggression. And by the middle of the XII century. finally left historical (and from the political) arena, being subdued (and then assimilated) by the Germanic peoples.

Now their descendants speak German (albeit with some accent) and consider themselves to be Germans.

Their closest modern relatives, who have retained their Slavic identity - the Poles - would undoubtedly be happy with the fact that the founder of the dynasty that ruled Russia for seven hundred years is their closest relative.

However, historical science, unfortunately or fortunately, does not provide them with such an opportunity.