The ballad about the T-55. Maturity 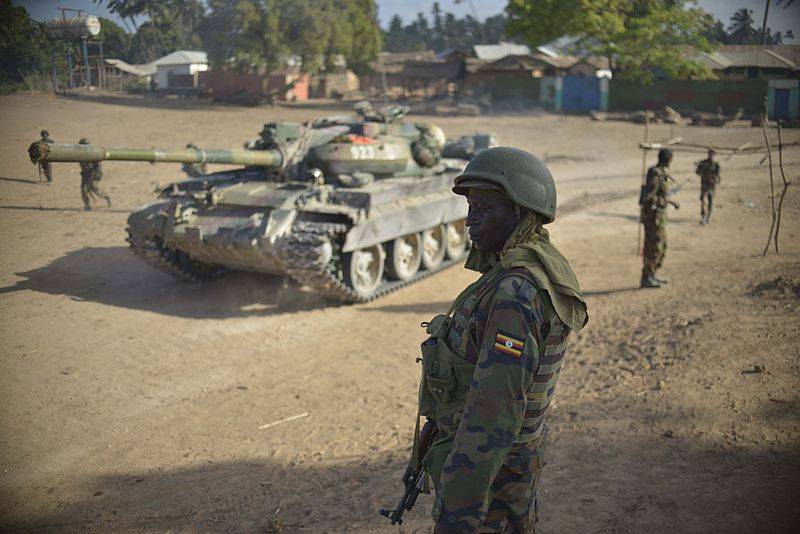 Then your maturity
Your disobedience to fate
Appreciate the bitter and sober
The judgment of people equal to you!
Rudyard Kipling. "Burden of Whites" Translated by A. Sergeev.
Tanks- monuments. The T-55 tank, in fact, was a fairly deep and well-thought-out modernization of the T-54 that preceded it and at the same time a real conglomerate of research and development studies at the Kharkov plant number 75 and OKB-520 from Nizhny Tagil.

Many hands, as you know, as well as heads, make everything better. So it is not surprising that this tank has found wide application not only in the Soviet army, but also in many armies of the world. 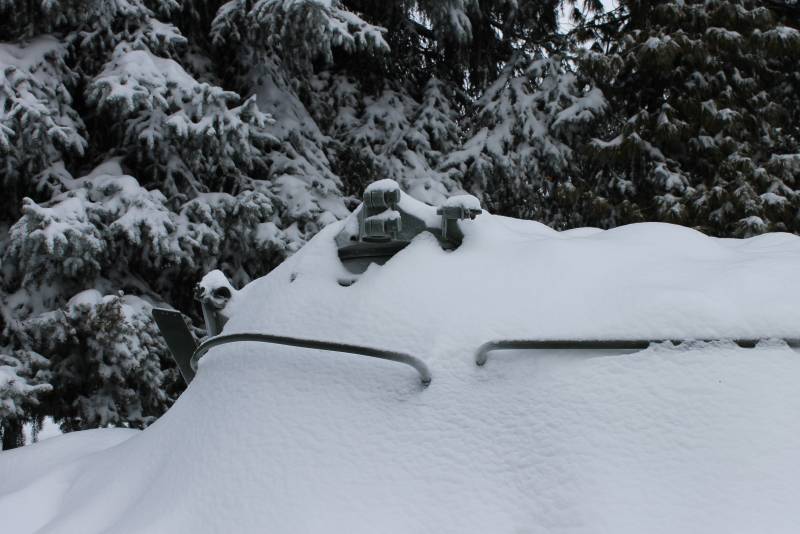 And this is a photo of the T-55 tower, standing among the pine trees in Penza near the chapel. During the discussion of the previous article, there was a dispute about whether it was the right tank, and whether the exhibitors were mistaken with the signature. Alas, it will not be possible to find out this until the summer, since all of it up to the tower has been covered with snow today. You can see the mounts for the anti-aircraft machine gun, but on the T-55 it was not? But ... it was not only on the first models, and then it was put back on, so it doesn't mean anything.
Our opponents also did not sleep.

And here, first of all, the armament of the latest new tanks in the USA, England, and then in Germany with the new 105-mm L7 tank gun, developed by gunsmiths in England, but turned out to be so successful that it was also produced in the USA, began to matter. by assigning the index M68. 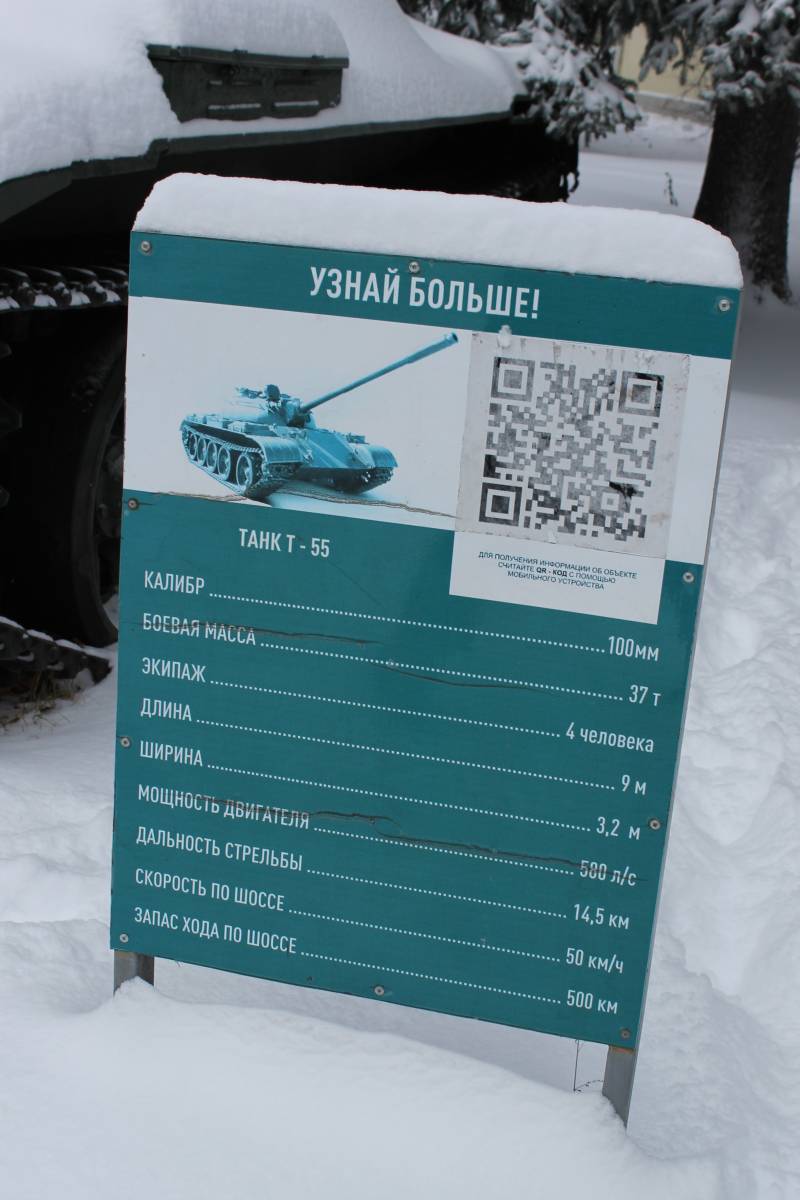 And the signature on the plate next to it - here it is. And since PVAIU was responsible for the installation, why not believe her?
Its main advantage was the high muzzle velocity of the armor-piercing subcaliber projectile, equal to 1475 m / s, which allowed the new tanks of our potential opponents to hit the T-55 from a distance of 1800 m.And at a distance of 2000 m, this projectile could penetrate a sheet of armor 210 mm thick ...

Experts calculated that in a duel between the T-55 and the M60, the chances of his victory over the latter (all other things being equal) are 1: 3. That is, destroying this one tank, we risked losing three of our vehicles.

It was this calculation that served as the reason for such a hasty development, and then the adoption of the T-62 tank, on which, along with the strengthening of the booking, they began to install an even more powerful 115-mm U-5TS smoothbore gun.

Well, today the illustrations for this material will again be drawings made by A. Sheps, and we will once again visit “our tank freak show”. And the first in it will go tanks T-54, the predecessors of our T-55 ... And we will start with the very first T-54, which appeared back in 1945.
The resolution of the Central Committee of the CPSU and the Council of Ministers of the USSR "On measures to ensure the comprehensive modernization of the T-55 (T-55A) and T-62" tanks of July 25, 1981, according to which (taking into account the number of T-55s in the army) could take about 15 years.

The T-54-46-1 had a gun with a muzzle brake and a traditional turret.
First of all, the armor protection of the tower was strengthened: to the right and to the left of the gun embrasure, they placed blocks of armor, which they called

With "clamps" and "Ilyich's eyebrows".

Structurally, they were cast parts of armor steel, having a thickness of 30 mm, behind which there were boxes with 5-mm steel sheets at intervals of 30 mm filled with polyurethane foam. Such a constructive solution immediately increased the tank's security: from APCR shells by 120 mm, and from conventional armor-piercing shells by 200-250 mm.

T-54-46-2. The tower, as you can see, is still a traditional shape, borrowed from the T-34.
The barrel of the gun was covered with a heat-shielding casing, which made it possible to reduce the unevenness of its heating. It would seem a trifle, but it also increased the accuracy and accuracy of fire.

T-54 1947
In turn, they decided to cover the undercarriage of the modernized tank with anti-cumulative rubber-fabric screens. But only the width of the tank exceeded the maximum dimensions for transportation by rail. And in order to transport them, these screens had to be removed.

They continue to "conjure" over the shape of the tower.
The production of the T-55 continued until 1977, when more advanced models of the T-62 and T-72 tanks had already appeared.

However, it continued to be produced, rightly believing that a tank well mastered by the troops (besides, relatively cheap and with a high level of maintainability) could well be used in a future total war with the use of nuclear weapons.

By the way, for this case, individual anti-radiation protection vests were created for tankers. Well, their jobs on the same T-55 tanks were supplemented with local protection against penetrating radiation.

And here it is - almost everything is the same, but without a little "enticement", well, it is simply impossible in any way.
The experience of using tanks in Afghanistan required strengthening its mine protection.

To this end, in the bottom of the T-55, under the driver's seat, a frame made of a steel channel 80 mm thick was placed, which was covered from below with six sheets of 20 mm thick armor. And on the right, behind his seat, a pillers appeared - a strut that prevented the bottom from bending when the tank was blown up by a mine. The driver's escape hatch, located in the bottom, also received additional booking with a 20-mm sheet.

And now, finally, the T-54B ... With the lure on the tower is done forever!
Smoke grenade launchers were now installed on tanks for firing grenades loaded with white phosphorus. And to protect against napalm, all outdoor electrical wiring was hidden in steel tubes. The hoses from the external fuel tanks were lined with asbestos in a metal mesh frame.

Well, and by increasing the travel of the road wheels from 135-149 mm to 162-182 mm (by installing new, more advanced torsion shafts) and the height of the lugs on the tracks (together with the use of a new pattern of their supporting surface), we achieved an increase in the already high cross-country ability of all these machines.

T-54BM - KPVT stands above the loader's hatch.
The T-55A turned out to be the first tank equipped with the Drozd complex, which entered service in September 1983.

And already in December of the same year, the T-55AD tank (these tanks received such an index), this machine was sent to the troops.

Structurally, "Drozd" (total weight of about one ton) consisted of two radars for detecting ammunition flying up to the tank and an armament system that fired a high-explosive fragmentation projectile ZUOF14 in their direction, the detonation of which created a fragmentation field at a distance of one and a half meters from the tank with a density of 120 fragments per 1 sq. m.The scattering velocity of the fragments was 1600 m / s, and the mass of each of them was about 3 g.

Such an explosion either caused the detonation of the charge of the approaching ATGM, or could destroy its cumulative funnel or deflect it from the flight path. This system has proven itself especially well against RPGs of various types, the mass of the shells of which was relatively small.

Finally, it came to the T-55
As for the tank's firepower, it was enhanced by the installation on it of the 9K116 "Kastom" complex, created by the Tula Design Bureau under the leadership of A.G. Shipunova.

The throwing device told the rocket an initial speed of 400-500 m / s, which was maintained in flight by the operation of the main engine. The missile was controlled using a semi-automatic laser guidance system, which has a high degree of protection against interference.

Its advantage was the small volume that the control equipment occupied in the fighting compartment. True, it was impossible to use the "Kustet" on the move, and, nevertheless, the use of this complex on the T-55 significantly expanded its combat capabilities.

It is believed that only the use of this complex was equal to the installation of additional armor 400 mm thick, which, due to its exorbitant weight, would simply be impossible to do! 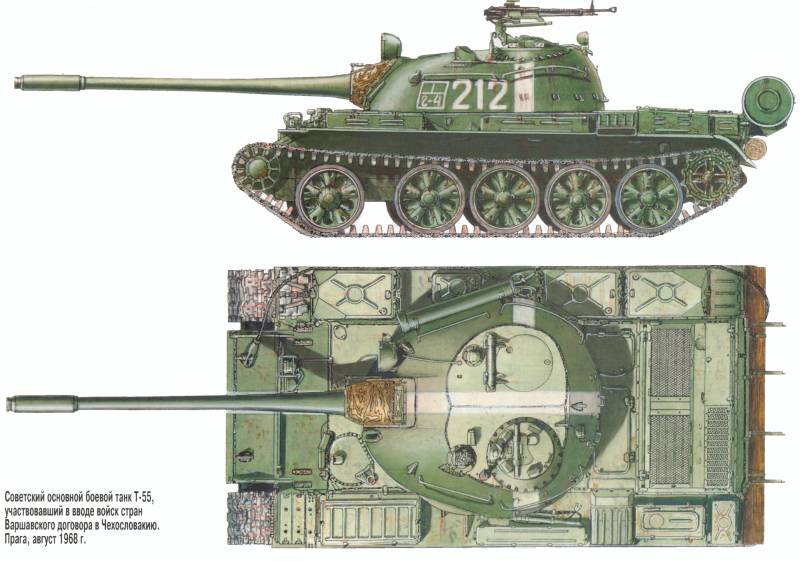 The reason is the opinion of military experts that this is only extra weight, since it is useless to shoot at high-speed jet aircraft. Already at the end of the 1960s, when anti-tank helicopters began to appear, the anti-aircraft DShKM was again installed on the tank (since 1969). And then from the beginning of the 70s and NSV.

In Egypt, T-55s were only repainted and did not bother themselves with any alterations ...
The export modifications of the T-55M5 and T-55M6 tanks with built-in reactive armor and a 690 hp engine are very interesting. with., modern fire control devices and other improvements.

The T-55M6 received a turret from the T-72 tank with a 125-mm smoothbore cannon. The automatic loader with 22 rounds of ammunition is located behind the turret in a special armored container. At the same time, the hull itself was lengthened by one roller, and at the customer's choice, rollers from T-55, T-72 and T-80 can be installed on this tank.

The site administration and the author of the material are grateful to A.S. Sheps for the illustrations provided!

Ctrl Enter
Noticed oshЫbku Highlight text and press. Ctrl + Enter
We are
Is the "old" well forgotten to become the "new"? Part-2. At the call of honor and dutyTank T-90MS: Analysis of the main characteristics and possible ways to further improve the combat qualities
Military Reviewin Yandex News
Military Reviewin Google News
64 comments
Information
Dear reader, to leave comments on the publication, you must sign in.