The Great Depression in the USA - how it was 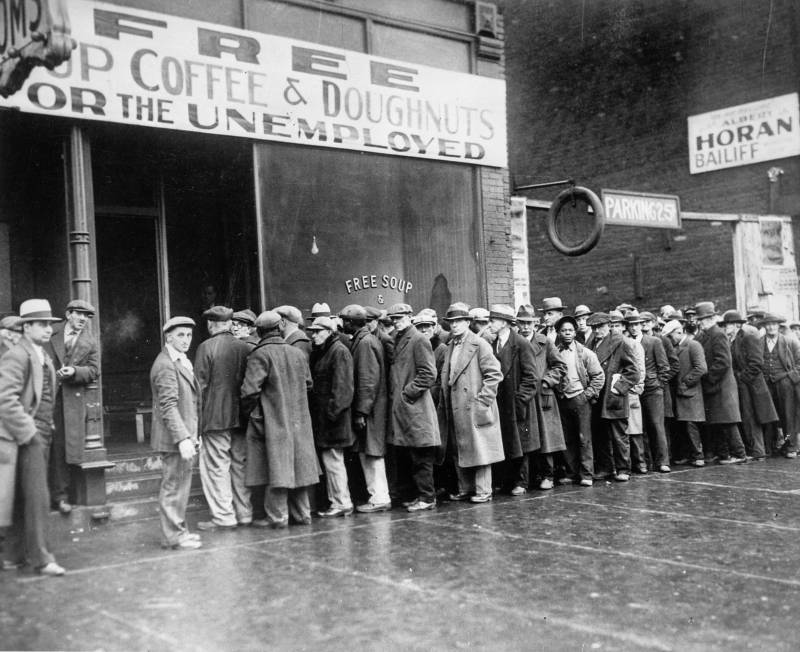 The 20s were a time of prosperity and high hopes for the United States.


The First World War (the losses of the Americans in which in comparison with the rest of its participants were simply insignificant) enriched the country fabulously. And gave a powerful impetus to the development of the economy. And, above all, industrial production. New forms and methods were introduced there. Such as the conveyor belt invented by Ford, standardization and other useful innovations that increased not only the profits of corporations, but also the earnings of each of their employees, down to the most ordinary ones.

The fantastic growth of the stock market played a special role in raising the prosperity of the Americans - over a year (from 1928 to 1929) it increased in volume from 2 to 5 million shares bought and sold a day. The cost of the securities themselves soared by 40% over the same period. At the same time, both old and young rushed to buy them.

Regardless of their occupation and real income, people invested in "investments", counting on quick and big money. They refused to do everything, went into debt (the volume of lending in the United States increased at that time in no less impressive volumes) - and bought more and more new shares. So a colossal "soap bubble" matured, which inevitably had to burst ...

The first "bell" that sounded back in the quite prosperous (at first glance) year 1926 was a decrease in the volume of construction, and quite a sharp one.

No wonder - financial resources were rapidly flowing from the real sectors of the economy into a bottomless burst of stock speculations. Then the Americans would have to remember about the recession that almost inevitably follows every economic boom, but they decided to be optimistic and blame everything on market fluctuations. The country continued to produce and consume, ignoring the growing inflation and the already coming crisis of overproduction.

The official starting point of the Great Depression is the famous "Black Thursday" on October 24, 1929, when Wall Street shuddered. Seemed as the most profitable investment in the world, the shares of such pillars of the American economy as US Steel, Westinghouse, General Motors, Paramount, Fox, Warner Browsers, before our very eyes (in the most literal sense of the word!) Turned into worthless pieces of paper.

On the very first day of the stock market panic, investors dumped about 13 million shares. And from 24 to 29 October, which has earned the unoriginal title of "Black Tuesday" - all 35 million.

Similar processes took place with the country's financial system - people who fell into insane panic rushed to withdraw their hard-earned money from their accounts. The bankers (who had previously distributed loans, as they say, right and left) were unable to pay them off.

Banks began to "burst" one after another - a wave of bankruptcies swept across the United States. From 1929 to 1932, 5 banks were closed forever. But all this was just the beginning ...

The real nightmare began when the crisis hit the real sectors of the economy - industry, transport, agriculture.

By the way, very soon it took on a worldwide scale. Nevertheless, the most severely affected was the United States, where the crisis processes were truly global and catastrophic.

Industrial production fell by almost half (not least due to the inability of the owners of plants and factories to use credit funds). By 1932, every fourth American was unemployed. This, in turn, reduced the purchasing power of the population. Earning 20 "bucks" a week seemed like a great success to most of the country's inhabitants. And those who lost half of their income were declared lucky.

Naturally, this situation led to more and more bankruptcies in industry and trade, to new rounds of unemployment and an increase in social tension.

Husbands simply put their own wives out the door, whom they could not feed. Or they themselves started running from them. The number of such “straw widows” in the United States during the Great Depression, according to some estimates, reached 1,5 million. Children and adolescents dropped out of school, forced to work hard for mere pennies in order not to simply die of hunger.

However, not everyone went to make money ...

Bonnie and Clyde, John Dillinger - the most cruel and bloodthirsty criminals in the United States also became a product of the Great Depression. Crime in the country has skyrocketed to unprecedented levels. Moreover, social protest of such a level was growing among the masses that complete chaos and the collapse of the state as such loomed quite clearly on the horizon in Washington.

Destruction of farming as a state secret

In the countryside, the situation was not at all the best. The “hope and support” of the American way of life - hardworking farmers are on the verge of death. In agriculture, overproduction was felt like nowhere else - food prices fell completely unrealistic, and the surviving banks demanded mortgage payments because they wanted to survive on their own.

As a result, loans taken earlier on seemingly favorable terms turned out to be the loss of everything. Banks took away not only crops and equipment, but also housing and land that served as collateral.

Thus, according to some researchers, every sixth farm in the United States was ruined. The number of "rednecks" who went around the world went into the millions, and no one knows how many of them died of starvation.

These figures are the most closely guarded state secret in the United States, which loves to rant about other people's "Holodomors" and collectivizations.

Independent sources cite the numbers at 5, and some even at 8 million Americans who did not survive the Great Depression.

Against the backdrop of all this horror, the famous "public works", introduced by the successor of Herbert Hoover from the presidency of the United States, Roosevelt, within the framework of his "New Deal" which is considered to be his salvation today, seemed a brilliant decision. It's not the same for everybody...

8,5 million Americans went through this hellish hell, where they worked hard for a dollar a day and more than meager food. And 25 (almost all) of the 30 dollars they earned on these public works at the end of the month were deducted from them - for food and accommodation.

The cure is a big war in Europe

All anti-crisis measures, how many were not taken in Washington, could not stop the destructive effect of the Great Depression.

It really ended only with the outbreak of World War II.

As usual, there is only one panacea for the really big problems of the American economy - worldwide slaughter.

It is desirable, starting somewhere in Europe far from them.

This is something we should definitely remember to this day.

Ctrl Enter
Noticed oshЫbku Highlight text and press. Ctrl + Enter
We are
Black October America. The collapse of the year 1929: a memory of the near future?Father told
Military Reviewin Yandex News
Military Reviewin Google News
125 comments
Information
Dear reader, to leave comments on the publication, you must sign in.