The myth "about the Russian occupation" of Georgia 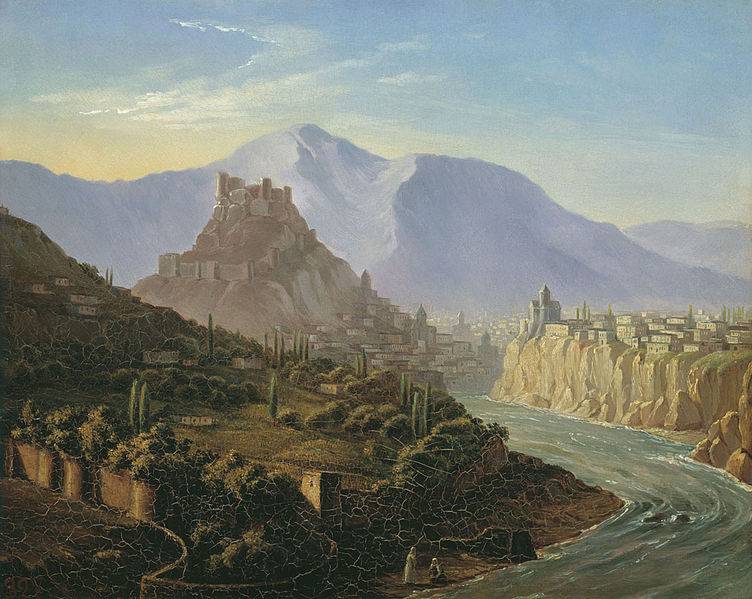 220 years ago, the Russian Emperor Paul I signed a decree on the annexation of Kartli-Kakheti (Georgia) to the Russian Empire. A great power saved a small people from complete enslavement and destruction. Georgia, as part of the Russian Empire and the USSR, came to unprecedented prosperity and prosperity, a rapid growth in the number of the Georgian people.

The now "independent" Georgia, without subsidies, without help and working hands of Russia, is consistently degrading. Georgian nationalism led to a bloody civil war, the secession of Georgian autonomies - South Ossetia and Abkhazia.

Georgia has become a US puppet. And now, when the West has entered a period of systemic crisis and reset, it is doomed to become a protectorate of the new Turkish empire.

The country's economy has nothing to offer the world market. The bet on the development of the tourism sector is bit by the current crisis, which, in essence, has buried mass tourism. The country's economy (including tourism) can only be developed within the framework of a single political, economic, cultural and linguistic space with Russia.

At the same time, local nationalists consistently created the image of an enemy - Russia, Russians, who allegedly occupied and robbed Georgia, oppressed Georgians.

Georgian politicians, publicists and historians have crossed out several centuries stories their country, which flourished in creative work and brotherhood with the Russians.

The current global crisis-unrest shows that the Georgian people have no future without Russia. The West needs Georgia only as an outpost directed against the Russian state (which leads to further destruction of the country).

The rapid creation of a new Turkish empire named after Erdogan raises the question of a new status of the pro-Turkish protector (taking into account Russia's consistent loss of its positions in the Caucasus). Then again Islamization and Turkization, complete assimilation within the framework of the "Great Turan".

Up to 2 million people have gone abroad. In the first wave, due to the ethnic policy of Tbilisi, Russians, Greeks, Jews, Armenians, Ossetians, Abkhazians, etc. fled. In the second wave, since the 2000s, Georgians themselves predominated among the migrants. People vote with their feet, the country has no future.

Between Turkey and Persia

In the XNUMXth century, Georgia split into three kingdoms: Kartli, Kakheti (east of the country) and Imereti (Western Georgia). There were also independent principalities: Mingrelia (Megrelia), Guria and Samtskhe-Saatabago.

All kingdoms and principalities also had internal fragmentation. The feudal lords constantly fought between themselves and the royal power, which weakened the country. In the same period, a layer of free peasant farmers disappeared there, their lands were seized by feudal lords. The serfs were completely dependent on the feudal lords, carried corvee and paid the rent. Feudal oppression was aggravated by obligations in favor of the king and his dignitaries.

At the same time, there was a threat of complete destruction of the Georgian people as a group of related tribes and clans.

Two regional empires fought for the territory of Georgia - Persia and Turkey. In 1555, Turkey and Persia divided Georgia among themselves. In 1590, the Turks took control of the entire Georgian territory. In 1612, the previous Turkish-Persian agreement on the division of spheres of influence in Georgia was restored.

In the XV-XVIII centuries. The South Caucasus, including the Georgian lands, became a battlefield between the Persians and the Turks. The struggle went on with varying success. Hordes of Turks and hordes of Persians alternately devastated and plundered Georgia. Attempts to resist were choking. Youth, girls and children were taken into slavery. They pursued a policy of Islamization and assimilation. They resettled the masses of the population at their own discretion. The remnants of local residents, hoping to survive, fled higher and higher into the mountains.

It should be noted that at the same time, the bulk of the Georgian feudal lords did not live so badly. Compared to the common people, who now experienced not only feudal, but also cultural, national and religious oppression. Georgian feudal lords quickly learned to maneuver between the Turks and Persians, and they used the wars of the great powers to increase their lands and the number of subjects.

In the Persian Empire, the Kartvelian principalities became part of a single state. The Georgian provinces lived according to the same laws and rules as other parts of this empire. Most of the officials appointed by the shah were from local residents. These were the Islamized Georgian princes and nobles. The Shah's army defended Georgia from the raids of the mountain tribes. The taxes collected from the Georgian principalities were no higher than in Persia or Turkey itself.

Georgian nobility on equal terms entered the elite of Persia. Dynastic marriages were common. Representatives of the Georgian elite were brought up from childhood at the court of the shah, then they were appointed officials in the provinces, both Persian and Georgian. Many among them were military leaders who fought for the empire.

The center of the political life of the Georgian elite moved to Tehran and Isfahan. Here were the main intrigues, a struggle was waged for the royal and princely thrones, marriages were made, honorary and lucrative positions were obtained.

If necessary, Georgian feudal lords easily converted to Islam, changed their names to Muslim. When the situation changed, they returned to the fold of the Christian church.

The Persian culture supplanted the Georgian one. The architecture took Iranian forms, the upper and middle classes spoke Persian. They started Persian libraries, Georgian literature moved from Byzantine canons to Persian. Only the monasteries still kept the remains of Georgian icon painting and writing. The secular world in the XNUMXth century had already become Persian.

Georgian feudal lords also found a very profitable product for the Islamic world. At that time, human trafficking (slave trade) was comparable to the oil and gas trade in the XNUMXth century. In Western Georgia, feudal lords assumed the right to sell serfs to the Turkish markets. In exchange, they received oriental luxury goods.

This became one of the leading reasons (along with the devastating wars, strife and raids of the highlanders) of the catastrophic decrease in the population of Georgia. Only in the XVI century the population of the western part of Georgia decreased by half. This is at a very high level of childbearing in the Middle Ages.

In the middle of the XNUMXth century, this disaster took on such horrific forms that the church council, on pain of death, banned the "slaughterhouse". However, the authorities did not have the strength, and often the desire, to restore order. The slave trade continued until the mid-XNUMXth century.

In general, the same can be seen in the modern Caucasian state formations - Georgia, Armenia and Azerbaijan. The policy of maneuvering between the interests of the West, Turkey, Iran and Russia, like the war, brings income only to a small stratum of the current nobility. The common people are dying out, fleeing, living in poverty, and have no future.

Ordinary Georgians at that time lived in constant fear and horror of the invasion of the Turks and Persians (from the west, south and east), the annual raids of the wild mountaineers (from the north). Another horror for them was the local feudal lords, squeezing all the juices out of them, selling their children into slavery.

Therefore, ordinary people hoped only for the help of the Orthodox, Christian state - Russia.

Only the Russian kingdom in time could ensure peace and security in the Caucasus, save local Christians, and soften wild morals.

But for most of the feudal lords, Moscow was only one of the players, and at first not the strongest one that could be used, receive certain privileges and gifts.

Russia is called for help

The Russians were not invaders.

They were called from the very beginning as saviors of the Christian people. Already in 1492, the Tsar of Kakheti, Alexander, sent ambassadors to Moscow, asked for patronage and called himself a "slave" of the Russian Tsar Ivan III (recognition of vassal dependence).

That is, from the very beginning, the South Caucasus understood that only Orthodox Moscow could save them.

Now, at a time of complete degradation of the Christian world, unbelief and the domination of materialism ("golden calf") it is difficult to understand. But then these were not empty words. Faith was fiery, earnest, they fought for it and accepted death.

Almost a century later, the Kakhetian king Alexander II, who was threatened by both Turks and Persians,

"Beat his forehead with all the people that the only Orthodox sovereign" accepted them into citizenship, "saved their life and soul."
The Russian tsar Fyodor Ivanovich then took Kakheti into citizenship, took the title of sovereign of the Iverian land, Georgian kings and Kabardian land, Cherkassk and mountain princes.

In 1594, Moscow sent a detachment of the voivode, Prince Andrei Khvorostinin, to the Caucasus. He defeated the ruler of the Tarkov region - Shevkala, took his capital Tarki, forced him to flee to the mountains and went through all of Dagestan. But Khvorostinin could not keep his positions, his resources were limited (Russia could not yet firmly establish itself in the region), and the Kakhetian king pursued a flexible policy, refused military and material assistance.

Under pressure from the mountaineers and due to a lack of provisions, Prince Khvorostinin was forced to leave Tarki (the fortress was destroyed) and retreat.

At the same time, Alexander gave a new oath to Tsar Boris Godunov.

After the Russians left, Tsar Alexander tried to appease the Persian Shah Abbas and allowed his son Constantine (he was at the court of the lord of Persia) to convert to Islam. But it did not help.

Abbas wished for complete obedience to Georgia. He gave Constantine an army and ordered to kill his father and brother.

In 1605, Constantine killed Tsar Alexander, Tsarevich George and the nobles supporting them. Constantine took the throne, but was soon killed by the rebels.

Meanwhile, Russian troops under the command of governors Buturlin and Pleshcheyev again tried to gain a foothold in Dagestan, but to no avail.

The successes of the Persian Empire in the fight against Turkey somewhat reassured the Georgian rulers. They began to forget about Russia and again lean towards Persia.

True, at the same time, Tsar George of Kartlin gave an oath for himself and his son to the Russian Tsar Boris Fedorovich. Boris demanded that the Georgian princess Elena be sent to Moscow to marry his son Fyodor. And the nephew of the Georgian king was to become the husband of the Russian princess Ksenia Godunova.

However, soon the Godunov family died, and Troubles began in the Russian kingdom. Russia has no time for the Caucasus. And the Kartlian king George was poisoned by the Persians.