When quality plays a cruel joke 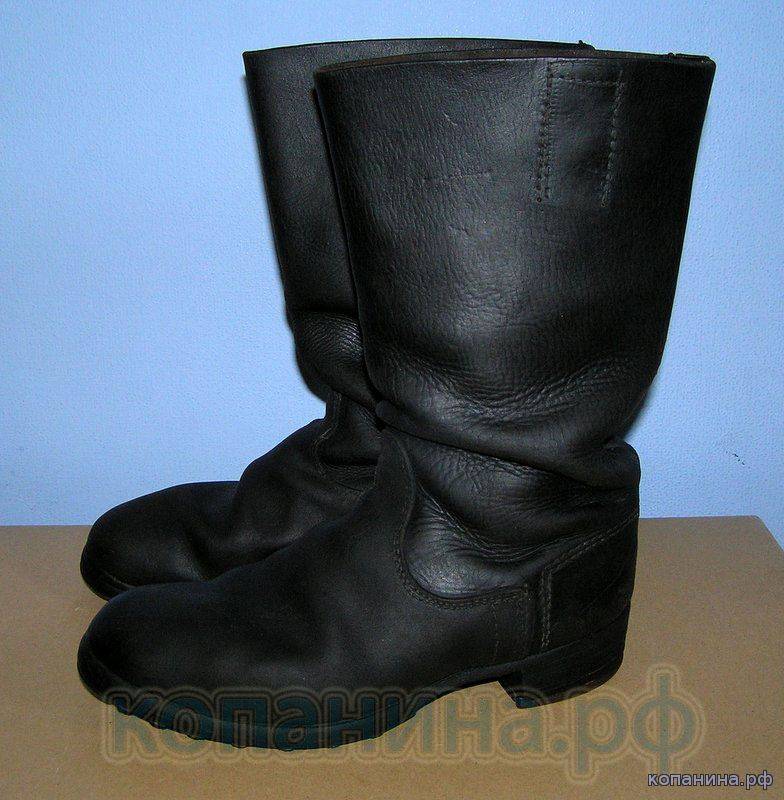 Much has been said about German order and discipline. About their pedantry in everything. In technique and in behavior. About punctuality. Veterans who reached Berlin and Konigsberg recalled this, tourists are surprised at this even now, getting to Germany.

With the same thoughtfulness, the leaders of the Wehrmacht approached the creation of army shoes.

In fact, there was more than one type of support back then. But I propose to consider today the most common - marschtiefel marching boots. They were issued to the rank and file and junior command personnel. Therefore, it could well seem that all the Nazis were shod with absurd (by our, Soviet standards) all the Nazis.

Well, so about the boots.

They were made from very quality cow leather. I repeat - from a very good one. There is information that the "black diggers" are still finding preserved samples in the ground.

The shafts can be called the hallmark of German boots. They were wide. Marked on the outside with a number of numbers indicating size, batch and factory.

The height before the beginning of the Second World War was from 35 to 41 cm.But since November 1939, for the sake of economy, the height of the bootlegs was reduced to 29 cm.

The width of the bootlegs is a moot point.

By our standards, it is excessive, it will be lousy when walking.

But Hitler's soldiers shoved grenades - "mallets" and spare magazines "Schmeiser" into the bootlegs.

Was it convenient or a tribute to fashion?

I do not know. AND история he is silent about it.

But the fact that it was faster and more comfortable to put on such boots due to anxiety is a recognized fact.

The next is the outsole.

She was double. Reinforced with two types of metal nails and several rows of wooden ones. What kind of nails!

Initially, stud nails were made of hardened metal individually and had six edges. And later, for the sake of the same economy, they already began to be produced by hot stamping. And the number of faces was reduced to five. 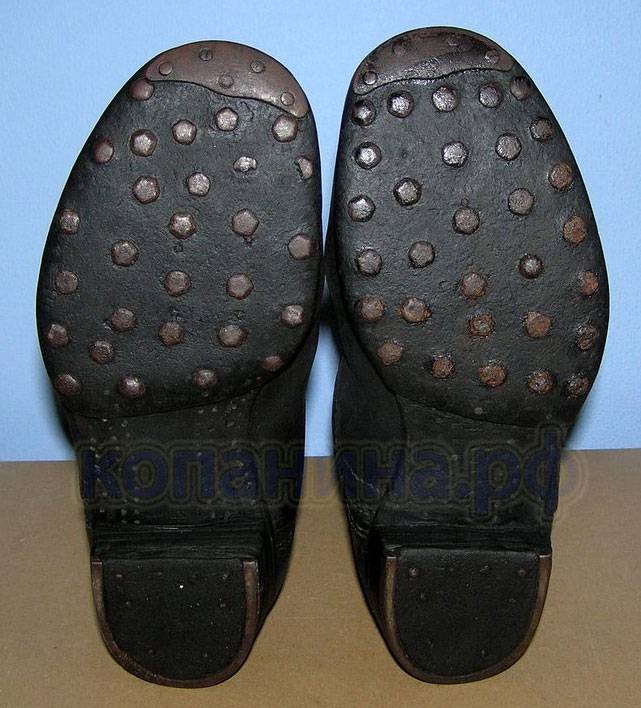 In this photo, you can clearly see the location of the fittings - the rows between the foot and the heel are stitched with wooden studs.

Here, by the way, are the images of the old and new type of thorn nails.

Probably, each of those who served in the Soviet army had to change worn out heels. The matter is simple: tore off an old heel, a boot - on a "paw", take a pair of new rubber heels from the foreman (while, of course, you listen to what a rogue you are), nod and go to the closet to nail. But this, of course, if everything is at hand: you are in the barracks, and the foreman is thrifty.

The Wehrmacht soldier was freed from such manipulations.

Because each of his heels around the perimeter covered hardened metal horseshoe!

Moreover, the left and right horseshoes were different. What could be learned by looking at the stamped letters R and L.

The front of the sole is also printed. So that you can knock loudly on the paving stones of Paris, Warsaw and Prague.

According to the norms, these marching boots were issued for a year and a half.

But with the right care, they could easily last longer. The quality allowed.

By the way, a shoe factory that belonged to brothers Adolf and Rudolf Dassler and produced sports shoes back in the 20s, and later grew into the giants Adidas and Puma, could not produce a sample of marching boots for the Wehrmacht. The quality claims were so strict then.

But they could not foresee everything, even in the general staff and the quartermaster services. Marschtiefel, who marched victorious parades through the capitals of European states, "stumbled" in Russia. And later they helped their owners to carry their feet to the walls of Berlin!

Designed for multi-day marches on the roads of Europe, in the winter of 1941 German boots with metal spikes and heels "pulled" the last warmth from the feet of their owners.

"General Frost", coupled with German pedantry, played a cruel joke with the Nazis.

Boots were given to the Germans strictly to size. And it was precisely this that deprived the Nazis of the opportunity to pull on a second pair of socks, or at least wind, for example, some kind of rag on their feet.

That is why the Wehrmacht will no longer have as many frostbitten feet as in the cold months of 1941-1942.

But the realization of this mistake (as well as the one that fighting the Soviet Union is disastrous) will come too late ...