Ideology on an empty stomach: will the doctrine of "Russian Donbass" save the unrecognized republics? 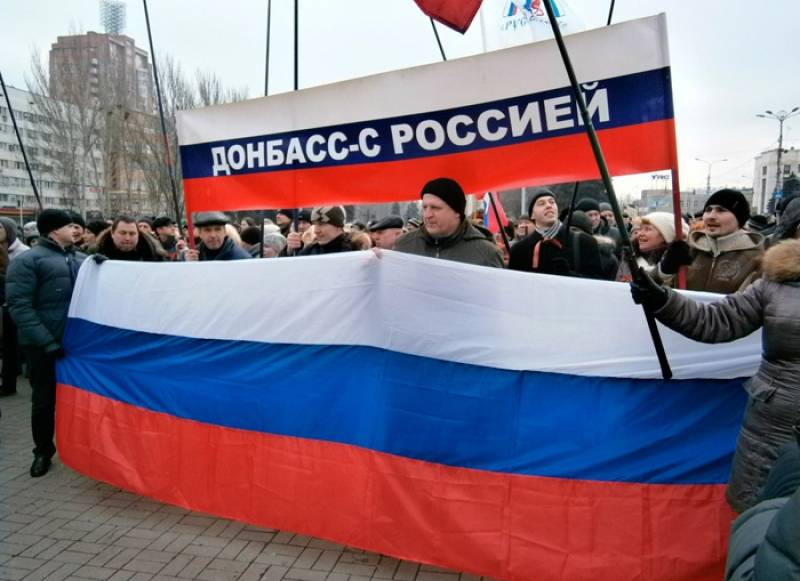 Back in June last year in Donetsk, it was decided to develop a conceptual document - the doctrine of the "Russian Donbass".

The document should not only help bring the republic out of the crisis, but also contribute to the final parting with Ukraine, orienting the population to a bright future, whatever it may be. Local politicians, historians and public activists were involved in the creation of the doctrine. Despite the resources involved, the process dragged on - the doctrine of the “Russian Donbass” was not presented in finished form to this day.

At the same time, the process, apparently, is underway: on Friday, January 8, the head of the DPR Denis Pushilin announced the fatefulness of the document.

“After the official adoption of the Russian Donbass doctrine, it will influence decision-making in all branches of government at all levels ...

It will also have an impact on jurisprudence. Parliamentarians will take these principles into account in lawmaking, and the Government - in normative legal acts.

Since an idea is a prototype of an action, then the actual ideas, the doctrines of the doctrine will form the basis of the goals and objectives of all spheres of activity of the Republic ”,

- said the head of the DPR.

Denis Pushilin did not explain exactly how an ideological document can affect all spheres of the republic and why it was only realized in 2020 about its necessity.

It can be seen that the preparation of the doctrine in Donetsk was approached so seriously that they have not been able to present it for 7 months already.

At the same time, certain doubts arise not only about the quality of the document, but also about its “salvability” and applicability for any purposes in general.

First of all, due to the tradition established in the post-Soviet space among officials in difficult times, it is imperative to develop another "development program" or "optimization roadmap", which are never implemented and replace each other without positive results.

In addition, there is a serious danger that the final product will turn out to be the result of close cooperation between officials and armchair scientists, in which there will be many loud formulations and grandiloquent phrases, but for the layman it will be inedible. Therefore, his presentation will be properly celebrated, and then forgotten forever.

Not so long ago, a similar thing happened in the LPR: despite the fact that the task was much more prosaic - to create a textbook on Russian stories, the result came out so creepy that they forgot about it literally a week after the demonstration.

The relevance of the study is also doubtful - Donbass is obviously Russian in all respects. And they deny it only in Kiev.

Everything is in order with the clamps in the LDNR - individual intrigues of LGBT communities and other lewd practices stem exclusively from the local elite.

The overwhelming majority of the population craves for reunification with Russia, professes Orthodoxy and traditional values. Do I need to explain to the Russians of Donbass that they are Russians?

The most important thing is that this noble impulse will in no way help the population to answer the two main questions that worry everyone in the LPR:

“Why is life so bad now?
And when will it get better? "

Today, local residents are watching with horror as the industry, which was the main asset of the republics, is dying. Recently, the DPR Ministry of Revenue and Duties stated:

“Last year, the export of coal industry products decreased by 15%, by 40% - by the metallurgical industry and by the same amount - by the cement industry.

The greatest decline was observed among the branches of CJSC Vneshtorgservice, which reduced the volume of exports by 45,15%.
The dynamics are shocking.

People see how, despite the titanic efforts of specialized services, the communal infrastructure is dying. They realize the critical shortage of personnel, when a fool is appointed instead of a fired thief, and then vice versa. Dozens of unfulfilled promises of the authorities are being dismissed - a train to Russia, for example, has been launched since 2015, and foreign banks have been attracted since 2016. Will the doctrine of the “Russian Donbass” help to solve all these issues, the development of which was at least five years late?

However, everyone perfectly understands how limited in their capabilities Donetsk and Lugansk are. That they are simply unable to solve conceptual problems is beyond their power. But at least a frank adult dialogue could be established with the population! Talk openly about difficulties, not deny the obvious. Instead, there is total censorship. In the LDNR, only the “opposition” speaks of problems, which, in turn, has nothing behind its soul, except for the thirst for power, homemade conspiracy theories and nonsense “for all the good”, instead of recipes for overcoming the crisis.

Just talking to people, openly and honestly, would probably be a hundred times more valuable than the doctrine of the "Russian Donbass" ...

Meanwhile, we look forward to the triumphant presentation of the document.