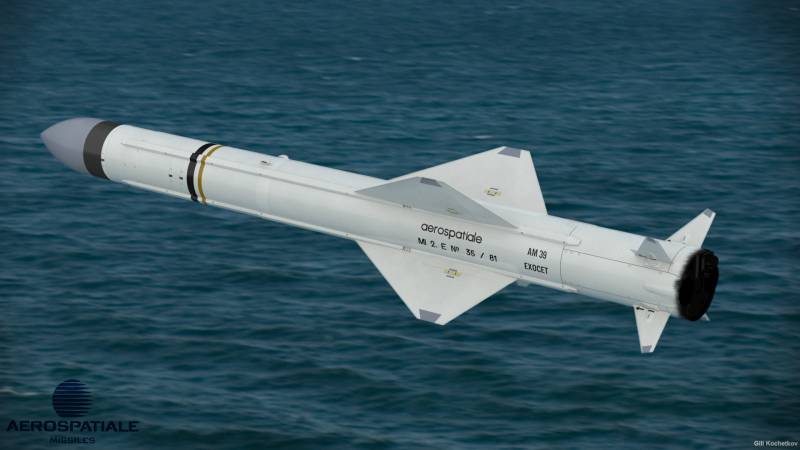 Exoset AM-39 - the main threat to the British fleet in the Falklands in 1982. Source: artstation.com

The Armed Forces of Argentina for the British Navy were quite a serious force, for a meeting with which they had to prepare. The enemy was armed with both anti-aircraft missile systems and quite modern French-made AM-39 Exoset anti-ship missiles. British helicopters Boeing CH-47 Chinook, Sikorsky S-61 Sea King, Sud-Aviation Gazelle, Westland Wessex, Scout and Lynx were equipped with dipole radio reflectors, infrared emitters and disposable jammers before the battle.

Sikorsky S-61 Sea King. One of six helicopter models used by the British in the war with Argentina. Source: war-book.ru
In a hurry, the shock and reconnaissance aviation the group, which included Phantom FGR.2, Sea Harrier, Harrier GR.3 and Nimrod MR.1 / 2 air reconnaissance. The Vulcan B2 bombers were retrofitted with the American AN / ALQ-101 radio jammers, which were removed from the Blackburn Buccaneer attack aircraft.

The British took radio camouflage seriously in the area of ​​the operation. The communications on the air were reduced to a minimum and the radiation modes of radars, guidance and suppression systems were strictly regulated. It is noteworthy that one of the reasons for such silence was the invisible presence of third forces.

According to a number of authors, in particular, Mario de Archangelis in the book "Electronic Warfare: From Tsushima to Lebanon and the Falklands War," the Soviet Union actively monitored the state of affairs during the conflict. The Tu-95RT sea reconnaissance plane was regularly dispatched to the South Atlantic, and the British were accompanied by harmless fishing trawlers along the route of the Royal Navy squadrons. The latter were Soviet spy ships in disguise.

The jump airfield for naval reconnaissance aircraft was located in Angola (at that time controlled by the Cubans). A group of Soviet reconnaissance satellites of the "Cosmos" type continuously worked over the South Atlantic. They intercepted radiation from British radars, encrypted radio messages and took photographs of the Falkland Islands.

There is even an assumption that the General Staff of the Ministry of Defense of the Soviet Union, receiving data on the development of events in the other hemisphere almost live, shared this information with Buenos Aires. Moreover, the USSR, specially for the Falklands conflict, put many satellites into orbit for several years, the flight interval of which over the conflict zone was less than 20 minutes.

The Soviet system of naval space reconnaissance and target designation "Legend", consisting mainly of devices of the "Kosmos" series, even made it possible to predict the time of the landing of the British landing on the islands occupied by Argentina. 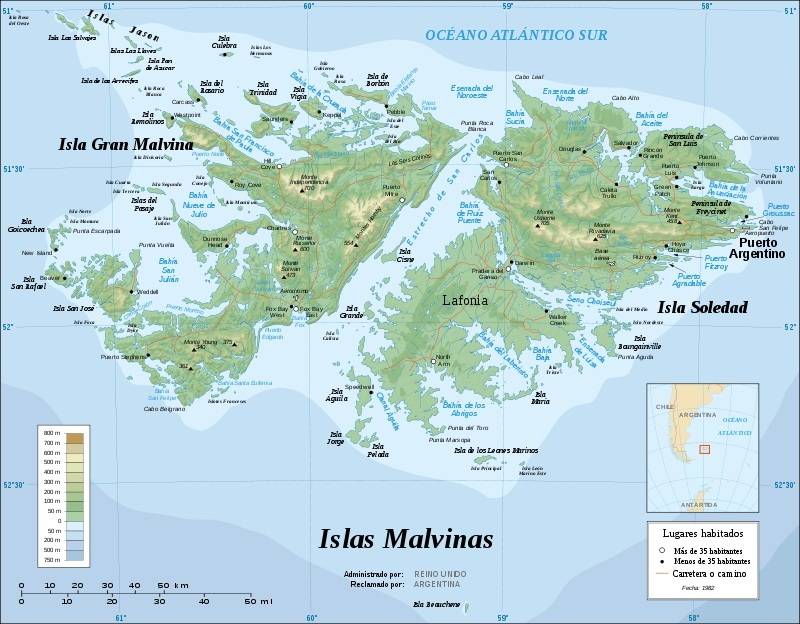 Argentina still considers the Falklands as its own and even calls the Malvinas archipelago. Source: en.wikipedia.org
Moscow's interest in the war on the other side of the world was not accidental.

A local skirmish involving a large grouping of ships of a potential enemy could not pass by the Soviet leadership. Moreover, the British were not going to fight with the banana republic at all, but with the strongest army in South America.

The British were informed about the close observation of the Soviet space group by their American partners. The United States operated the KH-9 Hexagon and KH-11 satellites in the South Atlantic with the latest digital data transmission system. In particular, during the passage of the Soviet satellite over the British squadron, the British tried to minimize the work in the radio range.

The Argentine forces blatantly neglected electronic warfare and camouflage techniques. Largely because of not the most advanced technical equipment, but mainly because of their own carelessness. In particular, the tragically lost cruiser General Belgrano did not limit the operation of its radar and radio communication systems in any way, thereby greatly simplifying its own detection and tracking.

The British were much more careful and sophisticated. 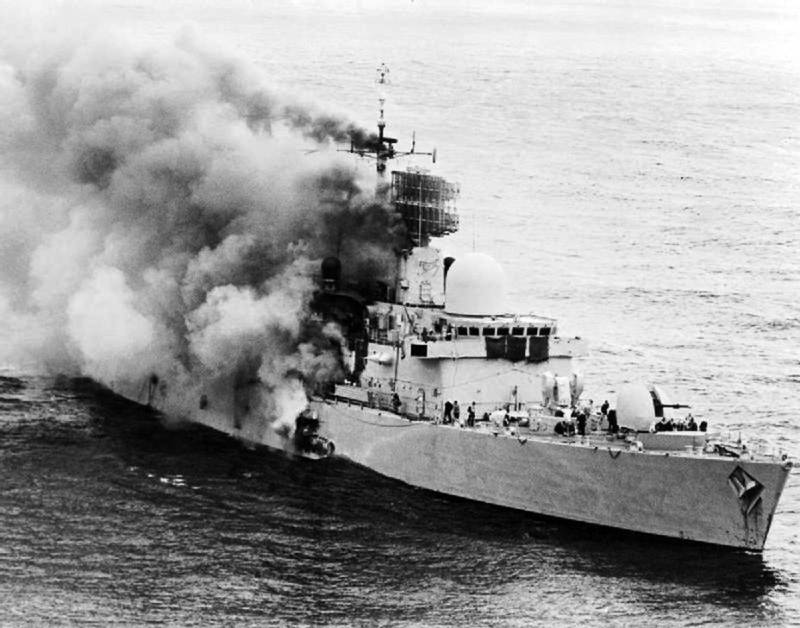 Sheffield is doomed. Source: warspot.ru
First of all, the ships created masking passive interference for the homing heads of AM-39 Exoset missiles. As soon as the locators detected approaching anti-ship missiles, onboard launchers fired unguided rockets stuffed with radio reflectors.

Usually, at a distance of 1-2 kilometers from the attacked vessel, up to four false targets were formed from reflectors, the life of which did not exceed 6 minutes. The main thing is that there is no storm at this time.

Various materials were used for the manufacture of reflectors - aluminum foil strips, fiberglass threads in aluminum, as well as nylon threads coated with silver. The British were so afraid of homing missile attacks that they even got used to throwing reflectors with exhaust gases through the ship's pipes just in case.

Panic in the Royal Navy came after the Argentines fatally damaged a Type 4 Sheffield destroyer with a displacement of 1982 tons on 42 May 4100 by a French anti-ship missile. Plessey Aerospace, a manufacturer of Doppler radio reflectors, was forced to fulfill defense orders around the clock.

The British passive electronic trap was first effective in the midst of the conflict on 25 May, when the flagship of the Centauro Hermes R-12-class anti-submarine aircraft carrier was hit. It was approached by Argentine Super Etendards (French production) from the 2nd Fighter-Assault Squadron and fired three AM-45 Exosets from a distance of 39 km.

The destroyer Exeter D-89 was the first to detect the short-term activation of on-board radars of enemy aircraft. They raised the alarm - it was not more than 6 minutes before the missiles hit.

As a result, one missile pecked at the bait, deviated from the target and was destroyed by the Sea Wolf anti-aircraft gun of one of the ships. Stories about the fate of the remaining rockets differ.

According to one version, both of them were re-targeted at the Atlantic Conveyor, which had been requisitioned from the civilian container ship, converted into an air transport.

Burning out Atlantic Conveyor. Source: thinkdefence.co.uk
The ship had no chance in this fleeting electronic warfare - as soon as Exoset lost sight of the main targets, they found themselves the largest.

A hulking container ship with Chinook, Wessex and Lynx helicopters tried to stand astern to the direction of attack, but did not have time and received two missiles at once.

The explosion and subsequent fire killed 12 crew members, including the ship's commander. 130 people managed to evacuate from the burning vehicle, as well as one Chinook and Wessex.

The Atlantic Conveyor burned and exploded for two more days before sinking to the bottom with a huge number of MTOs and ten helicopters on board.

According to another version, the air transport received only one anti-ship missile, and the last of the three deviated so much that it fell into the sea after running out of fuel. Bitter experience for the British in confronting modern arms showed that even a missile deviated from the course is still a very serious danger.

In the final part of the conflict, the British more and more improved methods of dealing with the main threat to themselves - the anti-ship Exoset.

There is still no exact data on the number of missiles used by the Argentines, but there were hardly more than 10-15 launches. In fact, the British were lucky - the enemy had a little of this expensive weapon, as well as the means of delivery. Super Etendard aircraft were able to carry out only six missile launches, of which only three or four hit their targets.

The second missile countermeasure was the disruption of the target's auto-tracking by the Exoset homing head after the object was captured. The attacked ship within 2-4 minutes created a cloud of dipole reflectors at a distance of 2 km directly along the course of the rocket's flight. As a result, the cloud, together with the ship, appeared within the homing head strobe, the rocket was aimed at the snag, and the ship exited it with an anti-missile maneuver.

The destroyer Glamorgan D-19, which was hit by four Exoset missiles on June 12, 1982, was relatively successful in this way. It was in the coastal area of ​​Port Stanley, the destroyer fired at the Argentines entrenched in the port and missiles in response were fired from ground installations. Three missiles were deceived by the indicated maneuver, and the fourth pierced the left side of the vessel, ricocheted into the hangar, destroyed the Wessex helicopter and caused a massive fire. For great English luck, Exoset didn't explode. Nevertheless, 13 members of the destroyer's crew were killed. 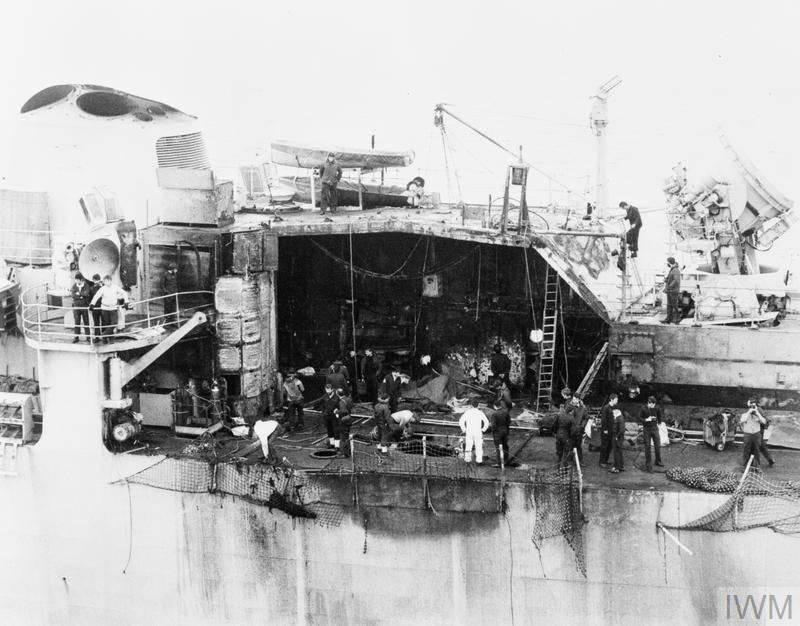 Consequences of the Exoset missile hitting the destroyer Glamorgan D-19. Source: reddit.com
And, finally, the third means of electronic warfare against anti-ship missiles was the joint use of passive and active jamming along the flight path.

Simultaneously with the exposure of the dipole reflectors, the ship turned on active radio interference in the Exoset withdrawal mode to the reflector clouds.

However, such support was only possible in the event of a single missile attack.

How effective this technique was, history is silent.