"Washington is the hottest point on the planet": the world press comments on the events in the USA 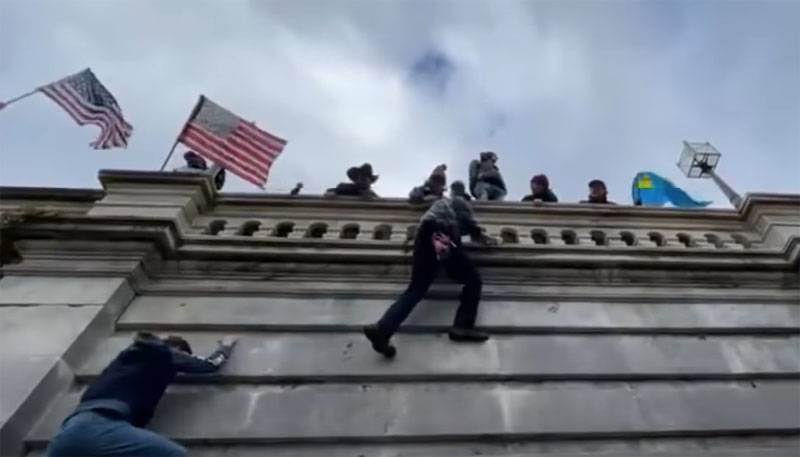 Events in Washington are becoming the main topic for the world press coverage. We are talking about a breakthrough into the Capitol building by supporters of the current US President Donald Trump. The breakthrough, we recall, took place at a time when the House of Representatives and the Senate began a joint meeting, following which Joe Biden was to be proclaimed president by implementing a multi-year constitutional procedure.


But in the end, the proclamation did not take place. A curfew was imposed in the US capital. Four people were killed in the clashes. Up to 20 were injured, including gunshot wounds.

The American press calls the situation "terrible" and "unprecedented".

Information resource The Drive writes that Trump nevertheless decided to take action and actually violated the American constitution. The readiness for the deployment of the National Guard is reported, as announced by the relevant minister Ryan McCarthy.

The Daily Beast writes that Trump tried to persuade government officials (primarily from his administration) not to leave their posts after a meeting of Congress with an attempt to proclaim Biden the 46th president of the United States.

The crowd burst into Congress with exclamations: "The people are coming!"

The materials indicate that the congressmen began to call the White House to "get information about the cohesion in the American political elite." In particular, they talked about a call from Senator Mitch McConnell, who, having called the White House, asked National Security Advisor Robert O'Brien, Deputy National Security Adviser Matt Pottinger and Deputy Chief of Staff Chris Liddell not to leave their posts yet and stay at work at least until January 8. It came to a "bargaining" over seats in the future administration, which also became an unprecedented event for the United States in all recent decades.

This is how it ends when they begin to despise the law. Fear, chaos, violence and death comes.
The Canadian press writes about the actual attempted coup in the United States. It is indicated that all persons who broke into the Capitol building may eventually become involved in high-profile criminal cases and receive life sentences.

Will we see again Tanksshooting at the White House?
Evgeny Popov:

America is a giant robot with a limited set of programs. This is good and bad at the same time. The main thing is that the constitutional procedure for summing up the election results has been disrupted. Biden was not formally announced the winner today. The world is bursting at the seams. Thank God, not our world. Merry Christmas!
Representatives of the press, loyal to the US Democratic Party, called Trump's supporters who broke into Congress terrorists.

Without any debate, the senators voted (92 to 7) to end the GOP attempt to reverse President-elect Joe Biden's victory in Pennsylvania. It was the second state for which a group of Republicans tried, but failed, to change the will of the voters.
In turn, Trump supporters said they did not recognize this vote.

The Chinese press called today's Washington "the hottest spot on the planet." Chinese journalists note that in the United States there is an "incredible power struggle".

Thanks everyone for the messages and love.

Will tweet some pics and videos of what went down. pic.twitter.com/1wFAsWnyAQ

Ctrl Enter
Noticed oshЫbku Highlight text and press. Ctrl + Enter
We are
Reports from the militia of New Russia for 27-28 September 2014 of the yearYuri Drozdov: Russia prepared the role of the sacrificial calf
Military Reviewin Yandex News
Military Reviewin Google News
169 comments
Information
Dear reader, to leave comments on the publication, you must sign in.