This is a very interesting car. In fact, only the Dutch Fokker G.1, which was discussed at the very end of last year, could compare with it in originality and versatility. And, if France did not implement all the plans for the construction of aircraft, but only the best, oh, how difficult it would have been for the Luftwaffe in 1940 ...

The middle of the thirties of the last century was marked by a simply frantic interest in twin-engine aircraft of a universal nature, from which, with minimal alterations, one could get a bomber, an attack aircraft, a heavy fighter, and a reconnaissance aircraft.

In general, the idea was quite imaginative, the question was only in execution. Some have succeeded, some have not. The Bf.110 from Messerschmitt was no match for the G.1 from Fokker, and the British Beaufighter from Bristol was just beginning to learn to fly.

Well, an interesting attempt in France could be called a competition for a three-seat fighter with a fixed forward-facing cannon armament, designed to intercept, escort, and also use single-engine fighters as a leader.

The competition brought together as many as eight wishing to win. And as a result, very promising machines appeared: Potet P.630, Anriot 220, Loire-Nieuport LN.20, Romano Ro.HO.

The Pote fighter even went into production and proved to be quite a combat vehicle.

However, none of them could compare with the product of the work of the Breguet team under the leadership of the chief designer Georges Ricard.

The aircraft turned out to be very decent, many experts spoke of it as a kind of lighter predecessor of the Beaufighter, which was generally true.

The design was more than modern: a cantilever mid-wing monoplane. There is a lot of metal in the structure, which provides excellent strength. The fuselage, wings, tail - everything was made of metal.

The fuselage, which was made by a monocoque, accommodated three crew members: pilot, navigator and gunner-radio operator. Attacking weapons, consisting of two 20-mm Hispano-Suiza cannons, were placed on both sides of the pilot. The radio operator was armed with a 7,5-mm MAC 1934 machine gun. 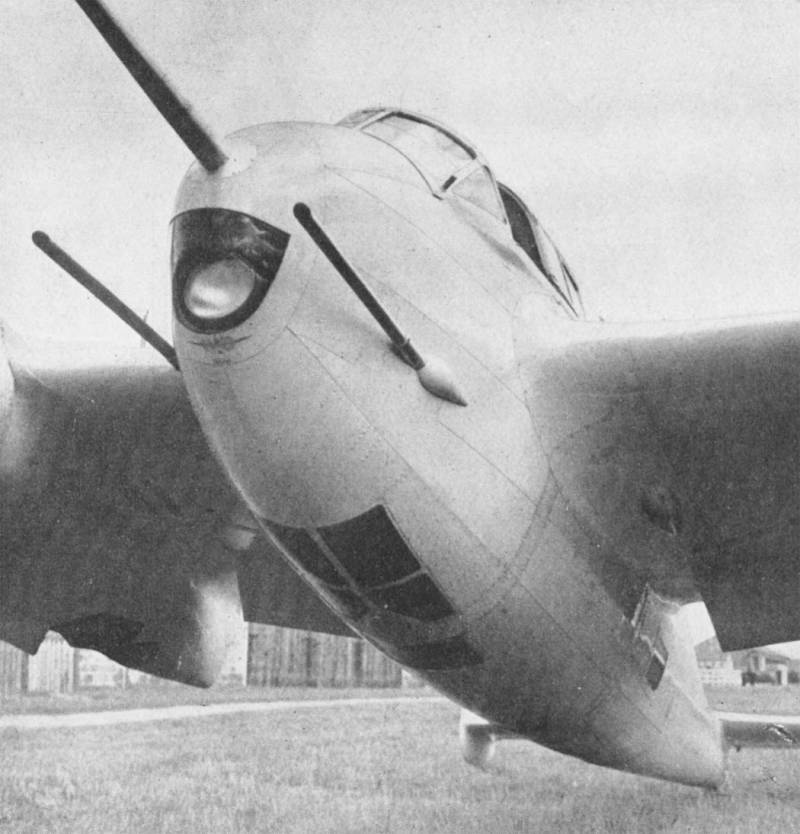 Each of them developed a power of 680 hp. at 3500 m and 650 hp on takeoff. The motors very progressively rotated the propellers in opposite directions, which had a very positive effect on the control of the aircraft during takeoff and taxiing. The wheel struts were retracted into the engine nacelles.

The process of building the prototype went so slowly, but, however, the customer did not strain the designers too much. The construction of the prototype Vg.690 began in 1935, and the official order for the aircraft came in early 1937, when the prototype was already waiting for the engines with might and main.

But maybe it happened for the best. 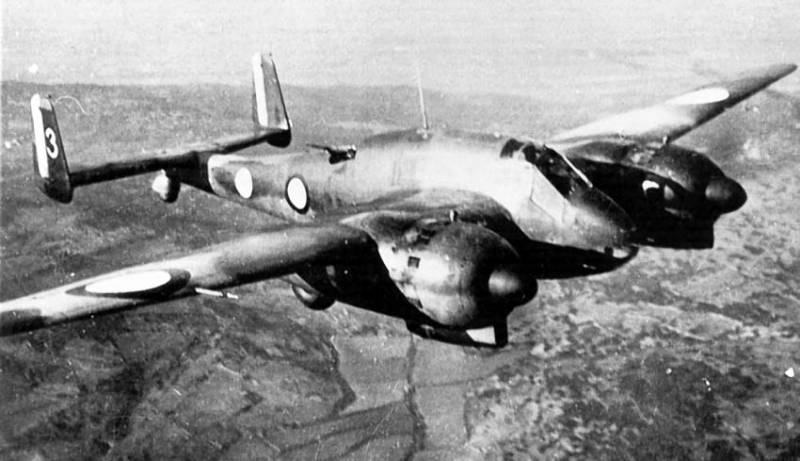 But simultaneously with orders for test vehicles, gentlemen from the military department drew up and began to ask all the participants in the competition questions about whether a fighter could magically turn into a bomber or attack aircraft?

Some designers said that “if you asked for a fighter, you will get it,” but Breguet was ready for this turn of events. And the option of a two-seater attack aircraft, if not worked out, then at least considered.

However, too much time has passed since the start of the work for everything to be played back. Therefore, they decided to leave the variant of the heavy fighter unchanged, calling it Vg.690-01, and to start the construction of the two-seat attack aircraft Vg.690-02 from scratch.

However, the trouble came from where they did not expect. The military liked the brainchild of the Pote company, the P.630, so much that the entire available stock of Hispano-Suiza engines was donated to the production of a series of these aircraft. 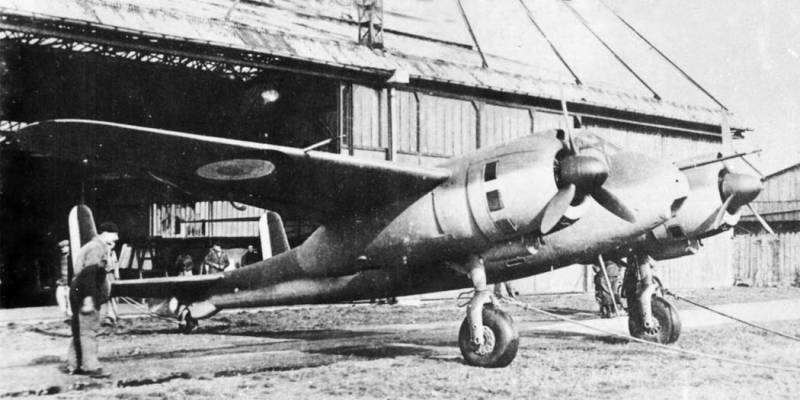 But when it took off, it immediately became clear that Breguet was beating Potet "by a clear advantage." Flight performance, controllability, maneuverability - everything was better with the Breguet. It is not surprising that on June 14, 1938, Breguet received an order for 100 aircraft in the variant of a two-seater attack aircraft-bomber, designated Bg.691AV2. And later this number was increased to 204 pieces.

The disputes were serious, not everyone in the Air Force leadership believed that France needed so many attack aircraft. Nevertheless, production went on. The alteration itself was not difficult, the main alteration was the installation of a bomb compartment for 8 bombs of 50 kg instead of the navigator's cabin.

One cannon, however, had to be removed. So the pilot was left with one 20 mm HS404 cannon on the starboard side in front of the fuselage. Instead of the second cannon, two MAS 1934 machine guns of 7,5 mm caliber were installed. And they added another 7,5 mm machine gun that fired obliquely down and back. Well, and a standard 7,5-mm machine gun for the defense of the rear hemisphere at the radio operator.

For the normal placement of bombs, it was necessary to slightly increase the nose of the aircraft, by 0,3 m. The bombs were placed, moreover, it became possible to increase the fuel supply from 705 to 986 liters thanks to the installation of two tanks in the engine nacelles. 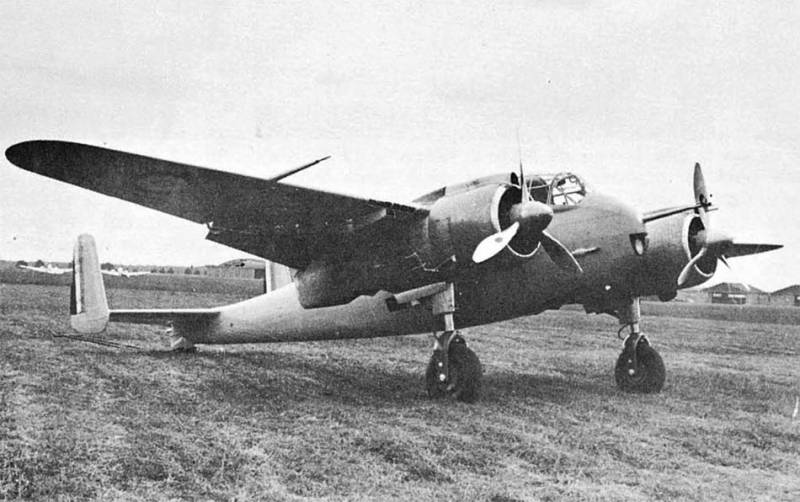 True, there were problems with the engines. The Hispano-Suiza 14AB motor had the required power and, moreover, had a small diameter. However, the resource of this motor turned out to be significantly lower than what was stated by the company. Plus, the reliability was quite below average.

The manufacturer "Hispano-Suiza" itself, having worn out with this engine, decided to switch to water-cooled engines. This greatly undermined the prospect of mass production of Vg.691, since the conversion for a water-cooled motor took a lot of time. Therefore, it was decided to replace "Hispano-Suizu" with "Gnome-Ron" air-cooled 14M. 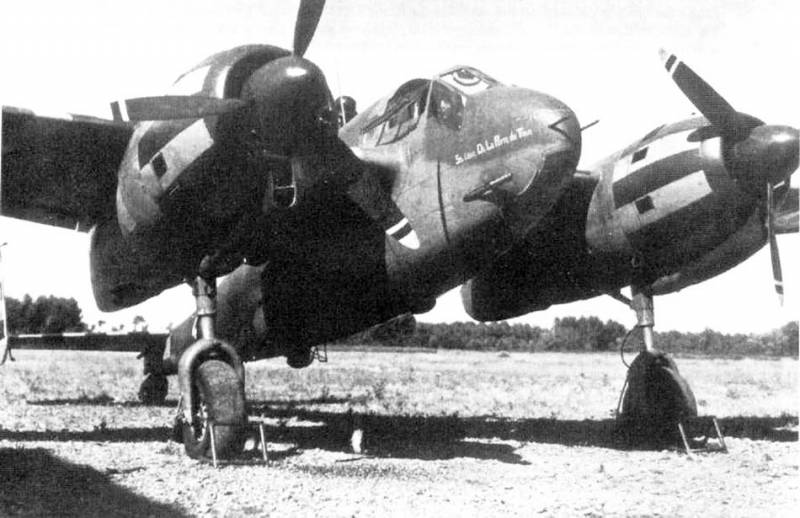 So the aircraft with "Hispano-Suiz" received the marking Bg.691, and with engines from "Gnome-Ron" - Bg.693. Otherwise, apart from the engines, the planes were identical. The only difference in the later Vg.693 series was the installation of two stationary machine guns firing backwards in the engine nacelles.

At the same time, a tactical reconnaissance aircraft Vg.693 was developed on the basis of Vg.694. The scout retained the possibility of using it as an attack aircraft, however, for this it had to be seriously re-equipped. The scout's crew consisted of three people, an observer with an aerial camera was placed in the navigator's place, and the armament was reduced to one fixed course machine gun and a mobile machine gun by the radio operator.

In the troops of "Breguet" Bg.691 and 693 began to enter the troops in October 1939. In the flight units, the attitude was ambiguous, the pilots liked the plane, but the technical staff was clearly not happy. Mainly due to the low reliability of the Hispano-Suiza motors, although the chassis has also been criticized.

The first combat use of Vg.693 was made on May 12, 1940, on the German columns near Tongeren. 11 Bg.693 attacked the orders of the mechanized division. The Germans met the French attack aircraft more than harshly, shooting down 7 cars out of 11, and damaging the rest so that one fell a little later, the second crashed during a forced landing, and one of the two landed at their airfield could not be restored, since it was literally riddled.

The second group of seven aircraft carrying out a mission in the same area, it must be said, lost only one aircraft.

In general, the success of the Breguet attack aircraft mainly depended on how sudden the attack was. If it was possible to approach the enemy unnoticed, then the losses were small. If the enemy's anti-aircraft gunners managed to notice the planes and organize a rebuff, the French suffered losses.

Very quickly, the following regulations were developed: they approached the target on low level flight, then climbed to 900-1000 meters, dived, dropped bombs at 300-400 meters and moved away from the target again at low level.

For two weeks of combat use, attack aircraft "Breguet" Vg.693 performed more than 500 sorties in which 47 aircraft were lost. In general, the aircraft design proved to be more than durable and made it possible to withstand multiple hits of bullets and shells, despite the fact that the design was not burdened with armor.

The attack aircraft returned to their airfields, being badly damaged by anti-aircraft fire. The simple and maintainable design of the machine, which made it possible to quickly put the aircraft in order, was very helpful. For example, replacing the engine took only 1 hour and 20 minutes.

By the way, about engines. As mentioned above, "Gnome-Ron" 14M developed its maximum power at an altitude of 4000 meters. And the plane was used at altitudes from 200 to 1000 meters. In fact, it was worth using a lower-altitude version of the engines in attack aircraft, but the approach of the French military department was such that Vg.693 fought with engines that were not quite suitable for this throughout his short career.

The production of the Breguet 690 series was discontinued when German troops approached directly to Villacoublay and Bourget, where the aircraft were being assembled. Up to this point, Villacoublay had produced 274 Breguet aircraft of series 693 and 695, and at Bourges 30 copies of Bg.693 were assembled.

When France surrendered, the fate of the stormtroopers was sad. Three planes were hijacked by their crews to North Africa and their tracks were lost there. Most likely, having not received proper repair, the planes remained at some kind of airfield.

All other "Breguet" Vg.693 and 695 were transferred to the Vichy troops. But when the unoccupied part of France was occupied by Germany, the planes were captured by the Germans. 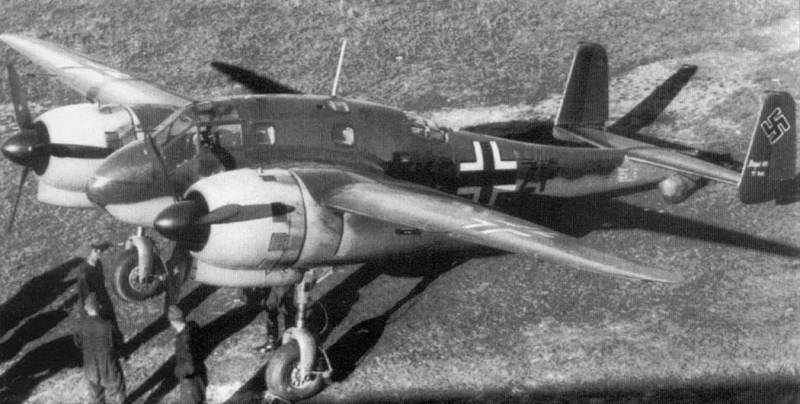 After testing, the German specialists did not show interest in the attack aircraft and handed them over to the Italian allies.

26 aircraft were used by the Italians as training vehicles. So, in fact, the fate of this very interesting aircraft ended, which became the first real attack aircraft of the French Air Force.