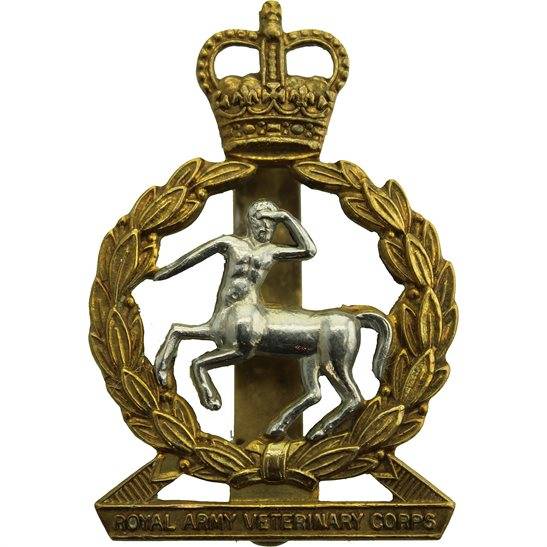 Until the end of the XNUMXth century, there was no veterinary service in the British army at all.


Blacksmiths employed by the British government were in charge of shoeing the army horses and providing them with medicines and general care.

However, the constant heavy loss of horses during military campaigns in the late 1796th century led to the decision in XNUMX that veterinary surgeons for the army should be recruited from the newly formed London Veterinary College.

John Shipp was the first veterinary surgeon in the British Army.

The corps emblem depicts Chiron - a centaur from Greek mythology in a wreath with a crown at the top. The centaur (man with the body of a horse) symbolizes the role of the corps in providing the army with horses under the leadership of a man.
For the first 82 years of its existence, the veterinary service in the army was organized exclusively on a regimental basis. Initially, veterinary surgeons were recruited directly into individual cavalry regiments and were part of them. Instead of forming your own department or corps.

There was no provision for the care of sick or lame horses when the troops were on the march. And sick animals were either thrown or killed.

By the mid-1850s, there were sixty-four veterinarians in the British army, forty-three of whom went with their units to the Crimea war.

Like the medical care of the soldiers, the veterinary care of horses during the Crimean War was imperfect. Lack of coordination between departments and adequate equipment seriously hampered the work of veterinarians.

Many horses died as a result of poor maintenance during shipping by sea.

The harsh winters of 1854 and 1855 killed many of the horses. Another reason for this was also the fact that veterinary equipment and medicines did not meet the requirements at that time (even by the standards of that time).

Under the leadership of Chief Veterinarian James Collins, the regimental veterinary recruitment system was finally abolished between 1876 and 1883.

In 1880, the Army Veterinary School was formed at Camp Aldershot, where military officers were trained in caring for army animals and providing first aid.

The huge animal losses during the Boer War revealed problems that veterinarians already knew about.

Despite the advice of veterinarians, in 1898 the supply department for treating sick and wounded animals was removed from the Army Remount Service, which was responsible for supplying the army with horses and mules. And the British army left for South Africa without any effective veterinary equipment.

Contrary to the recommendations of specialists, supply depots and veterinary hospitals were merged. This inevitably led to the rapid spread of diseases such as glanders, epizootic lymphangitis and scabies. This seriously undermined the operational effectiveness of the army.

Non-combat losses amounted to 326 horses and 000 mules. And only a small number of animals were lost as a result of enemy actions.

Formation of the Army Veterinary Corps

After the mistakes made during the Boer War, enormous pressure was exerted on the reform of the army veterinary service. From all quarters, including the Royal College of Veterinary Surgeons, as well as politicians and the general public.

The veterinary department of the army consisted only of officers.

In 1903, the Army Veterinary Corps (AVC) was created by royal decree. There were sergeants and soldiers who were involved in performing veterinary duties.

In 1906 he merged with the Army Veterinary Department.

By the time the First World War broke out, there were 364 officers in the Army Veterinary Corps. And by the end of the war - already 1 people.

In addition to officers, the number of other ranks increased from 934 to 41 people.

Mobile veterinary departments were created to evacuate sick and wounded animals, where they could be treated.

A typical veterinary hospital in France could accommodate 2 animals.

Most of the animals suffered from combat wounds, weakness, exhaustion, scabies and, for the first time, from gas attacks.

The level of veterinary action was high.

Two and a half million horses have been hospitalized in France. Of these, 80% returned to service after treatment. The rest were sold locally or slaughtered for human consumption. 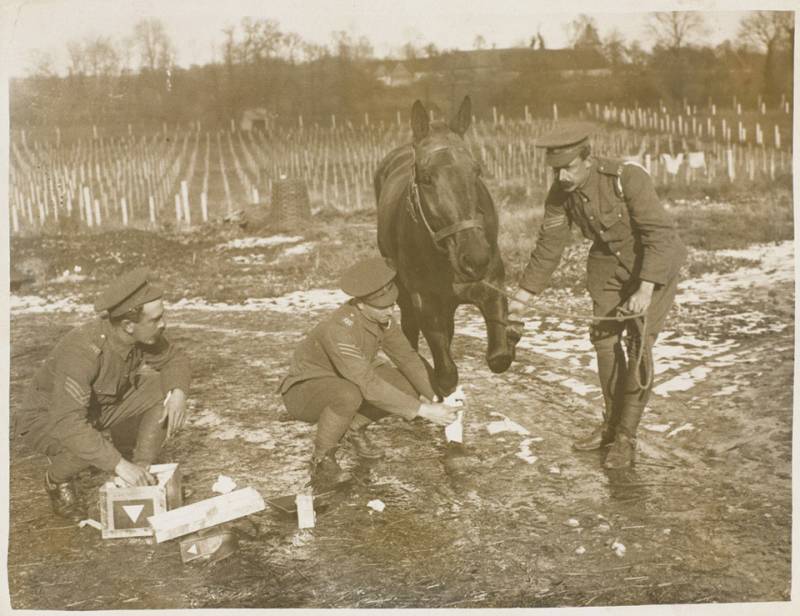 In recognition of the work of military veterinarians, on November 27, 1918, King George V conferred the Royal Army Veterinary Corps (RAVC) title on the corps.

“The Corps, with its initiative and scientific methods, has raised the military veterinary service to a higher level.

The high standard he maintains at home and in all military theaters has resulted in fewer animal losses, increased horse mobility and less animal suffering. ”

After World War I, as mechanization developed, the size of the Royal Army Veterinary Corps declined.

In 1938, the Army Veterinary School at Aldershot closed.

At the outbreak of World War II, the corps numbered 85 officers (59 of whom were in India) and 105 soldiers.

During the war, the staff was increased to 519 officers and 3 soldiers and sergeants.

Even with the increase in mechanization during World War II, horses and mules were still essential. Especially in Palestine and during the Italian campaign, where the terrain was difficult for vehicles. 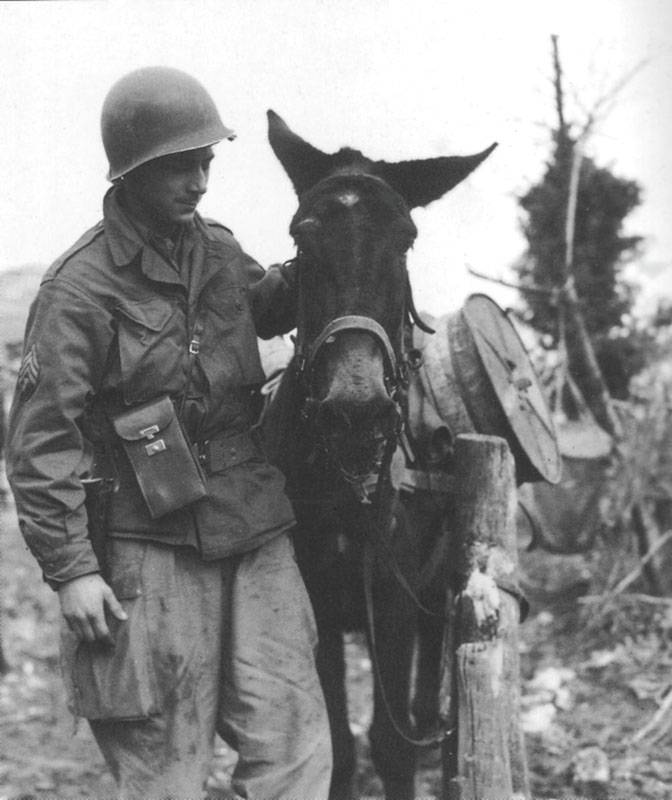 The Royal Army Veterinary Corps also had missions in Greece, Eritrea and Syria. In addition to transporting packs, he was in charge of preventive, antiepizootic and medical and evacuation services for horse personnel, as well as veterinary and sanitary supervision over the good quality of meat and other animal products entering the troops.

In addition to mules brought in from North Africa and the Middle East, nearly 11 mules were purchased in Sicily and southern Italy. Mule losses in the battles for Italy were higher than expected. At the same time, losses from infections and infectious diseases were low.

In Burma, in addition to horses and mules, General Wingate also used oxen, which were attracted not only as beasts of burden, but also as

"Meat on the hooves."
Elephants were also used there as transport. Due to the nature of the campaign, the animals seriously injured in Burma could not receive qualified veterinary care. Therefore, many of them were killed.

In 1943, Great Britain instituted a special award for animals - the Dicken Medal.

Note. The Dickin Medal or the Mary Deakin Medal is Britain's highest military award for animals, established in 1943 by the founder of the animal welfare organization Maria Deakin. The medal is made of bronze and depicts a laurel wreath with the words “For Courage” and “We Serve Too”. The order ribbon consists of three vertical stripes - green, dark brown and pale blue. The award is presented by the Mayor of London. It is awarded to animals that have shown outstanding courage and dedication to duty while serving in any military or civilian rescue service. This medal is often referred to as the Victoria Cross for animals.

As of September 2017, this medal has been awarded 68 times. The latter was awarded posthumously to the Belgian Shepherd Dog Diesel, who died while on duty during a special operation to find and eliminate Islamic terrorists who staged the terrorist attacks in Paris on November 13, 2015.

After World War II, the Royal Army Veterinary Corps operated in many countries: Germany, Austria, Greece, Burma and Malaysia. Provided there veterinary services for cattle and small ruminants of food herds, military dogs and animals of subsidiary farms. And also animals abandoned by the population evacuated from the areas of hostilities.

In 1946, the Royal Army Veterinary Corps moved to Melton Mowbray, where it is currently based.

The corps staff did not drop to the pre-war level. The Second World War highlighted the role of dogs. In the years since that war, dogs have become the main animal involved in combat. 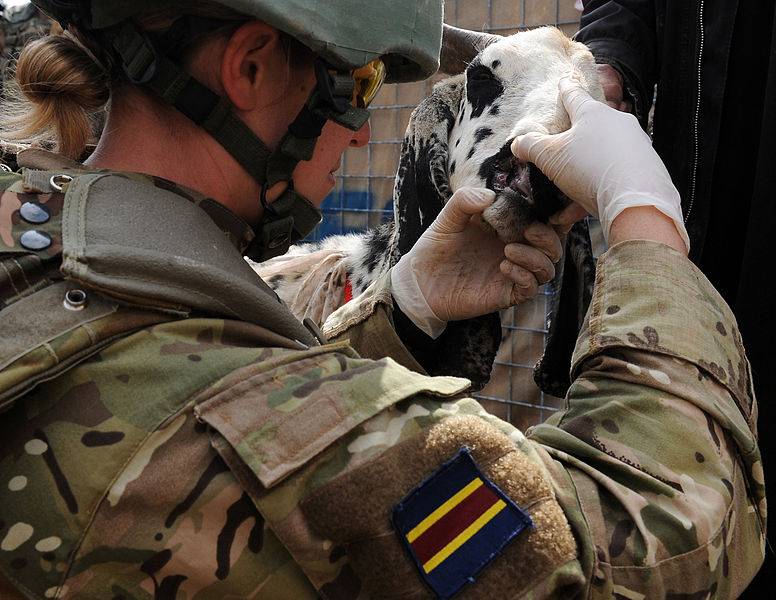