Albania in the first half of the XNUMXth century. Independence and World War II 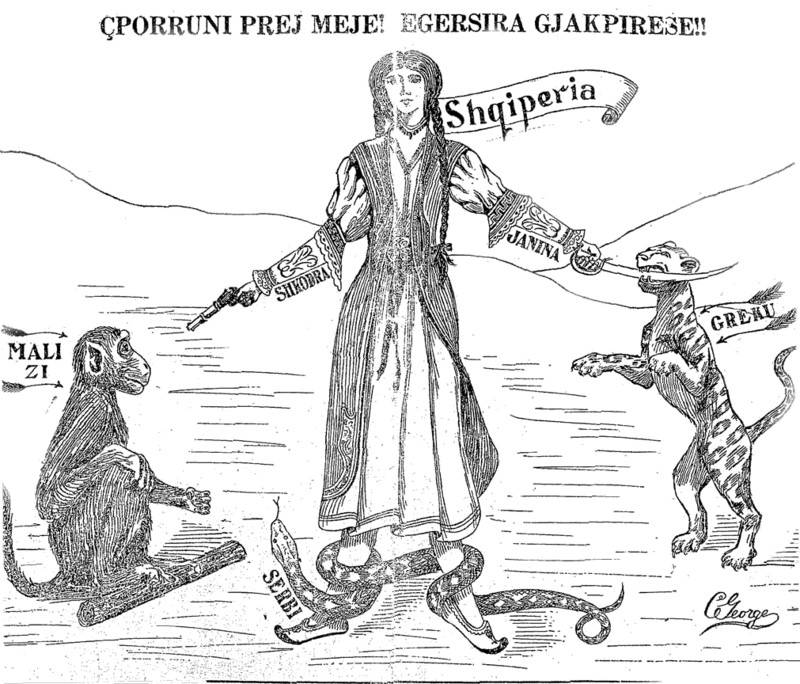 In this Albanian cartoon, a proud girl Albania “puts in place” its bestial neighbors - Montenegro, Serbia and Greece.


In previous articles, it was told about the Albanian warrior and commander Giorgi Kastrioti (Skanderbeg) and the Ottoman period stories Albania. Now we will talk about the history of this country in the first half of the XNUMXth century.

The emergence of independent Albania

The independence of Albania was proclaimed on November 28, 1912 in Vlora: the Albanians then successfully took advantage of the defeats of the Ottoman Empire in the First Balkan War. 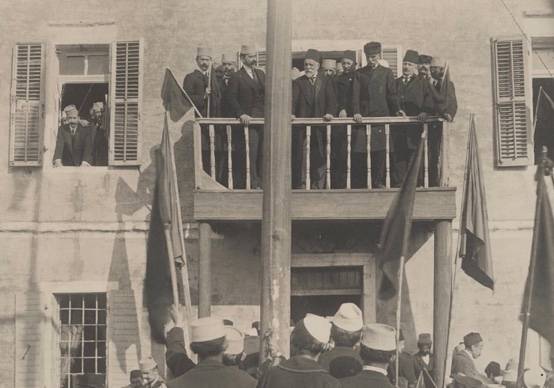 Proclamation of the independence of Albania. Vlora. November 28, 1912

This ran counter to the interests of Serbia and Montenegro, which wanted to divide the Albanian lands among themselves (most of all they were attracted by the port cities on the Adriatic Sea). But Great Britain and France were not then interested in strengthening the positions of Russia's allies.

But the great powers allowed the Greeks to occupy the southern part of Albania in March 1913.

In April 1915, a secret treaty was signed in London, according to which Albania was occupied by the troops of Italy, Greece and Serbia. And then these lands were occupied by the Italians - as payment for participation in the war on the side of the Entente countries.

The occupiers were expelled from Albania in 1920. Then rebel detachments, consisting mainly of peasants, liberated a number of cities.

Tepelena was released on June 10. In August, the occupiers were forced to evacuate their troops from Vlora.

Finally, the Albanian-Italian agreement was concluded, according to which the Italians renounced land on the mainland, but retained the island of Sazani.

It was returned to Albania in 1947. It was here in 1958 that the Soviet base of the submarine brigade was located, which was closed after the break in relations between Albania and the USSR due to the fault of N. Khrushchev. 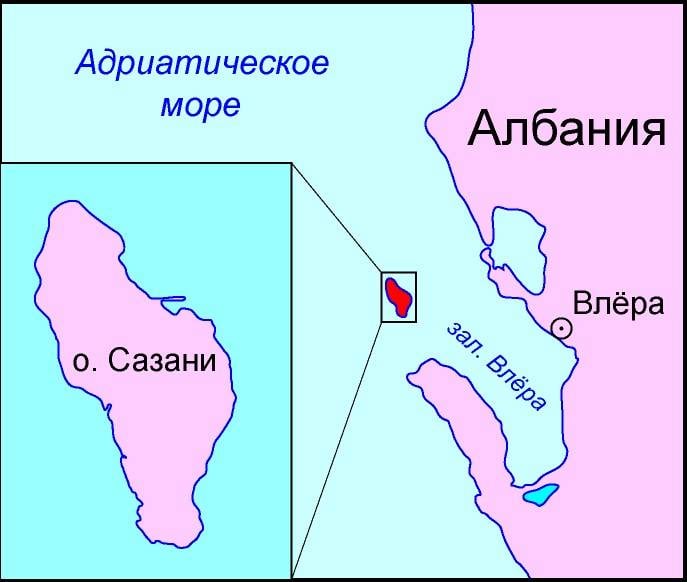 Let's go back to 1913. And we will see that in October, due to border disputes, a war almost broke out between Serbia and Albania.

The Serbs have already sent their troops into the northern regions of this country. But they were forced to retreat after the ultimatum to Austria-Hungary.

The hatred of the Serbs towards the Austrians then reached its limits. Which ultimately led to the assassination of Archduke Franz Ferdinand in Sarajevo. And by the beginning of the First World War.

Independent Albania became a refuge for members of the Sufi Bektash order (whose history is closely connected with the Janissary corps), expelled from Turkey. 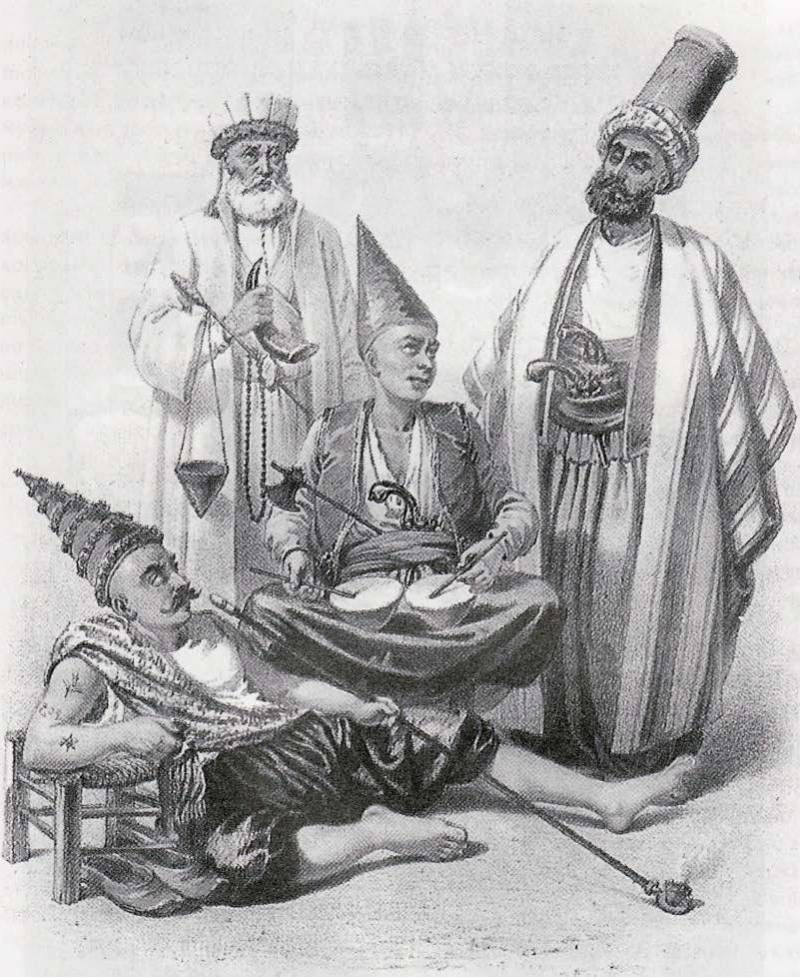 The head of the Bektash order and the commander of the Janissary corps in a medieval drawing.

Mustafa Kemal said after Turkey was proclaimed a republic:

"Turkey should not be a country of sheikhs, dervishes, murids, a country of religious sects."
Since then, the World Bektashi Center has existed in Albania. 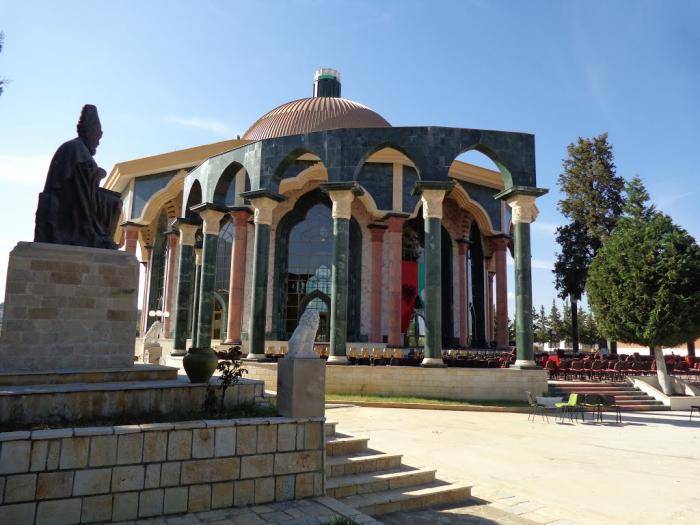 The well-known Enver Hoxha also came from the Bektash family. But he broke with the order, and in 1967 he completely banned it in Albania. In the same year, Enver Hoxha, in general, declared Albania

This had consequences. Some modern Muslim Albanians, for example, still enjoy eating pork.

In 1928, Albania received the first (and last) king, who became the second president of this country, Ahmet Zogu, who took on an additional name - Skanderbeg III.

On April 7, 1939, Italy brought its troops into the territory of Albania. 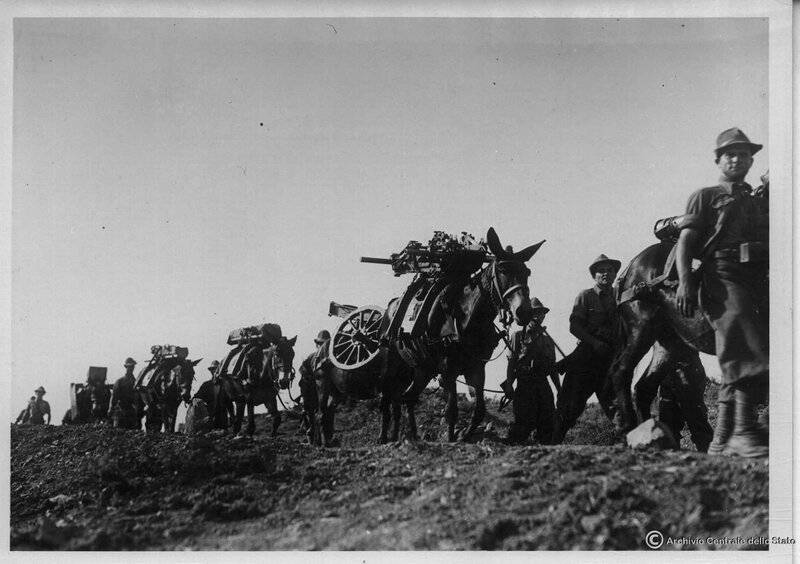 A division of the Italian mountain artillery in Albania.

The only unit of the Albanian army that tried to resist the Italians was the detachment of Major Abaz Kupi, which then retreated into the mountains, laying the foundation for the partisan movement.

The king and his courtiers fled the country.

Albania was annexed to the Kingdom of Italy as part of a personal union (that is, the king of Italy also became the king of a formally independent Albania).

On December 3, 1941, a local native, Mustafa Merlik-Kruy, was appointed the Italian governor in Albania, who served as prime minister.

And on November 7, 1941, the underground Communist Party of Albania was created in Tirana (united for the whole country, until then there were separate communist groups), which in 1948, on Stalin's initiative, was renamed the Albanian Party of Labor (APT).

Among its 13 founders were 8 representatives of the Christian community of this country and 5 of the Muslim. Kochi Dzodze was then elected the first secretary.

His deputy was Enver Hoxha, who in 1938-1939. studied in Moscow. Then he first met I. Stalin and V. Molotov, completely falling under their charm and retaining the deepest respect for them throughout his life.

It was Enver Hoxha who was appointed commander-in-chief of the partisan formations. 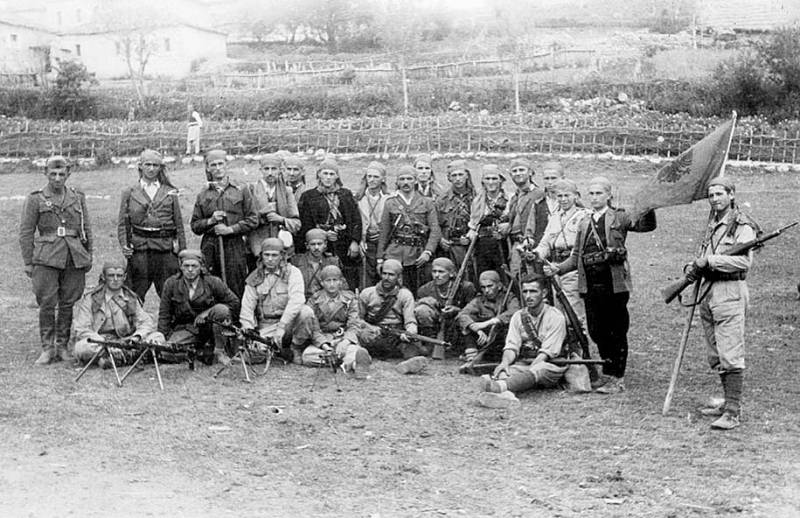 Enver Hoxha conducts a review of the fighters of one of the partisan detachments.

In March 1943, Enver Hoxha was elected General Secretary of the CPA Central Committee. He held this position (since July 1954 - First Secretary) until his death in 1985.

In 1943, he became the commander-in-chief of the partisan detachments controlled by the Communist Party, which were united in the People's Liberation Army of Albania. 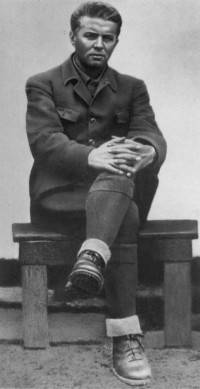 Enver Hoxha during the war.

The Albanian partisans became especially active after the Battle of Stalingrad, in which the Italian army suffered heavy losses.

In early July 1943, 20 partisan battalions and 30 smaller partisan formations were operating in Albania.

At this time, the successor of Enver Hoxha as the first secretary of the APT and the first president of Albania, Ramiz Alia, joined the Communist Party. He was the commissar of the 7th partisan brigade, and then the 2nd and 5th partisan divisions.

On September 8, 1943, the so-called "Brief Conditions for Italy's surrender" were published, signed on September 3.

At this time, on the territory of Dalmatia, Montenegro and Albania there was a 270-strong Italian army, the overwhelming number of soldiers and officers of which surrendered to the German troops. Only a small number of them capitulated to the partisans, and about one and a half thousand Italians went over to the side of the Albanians and fought in the People's Liberation Army of Enver Hoxha, as a battalion named after Antonio Gramsci.

Albania, abandoned by the Italians, was occupied by the Germans, who

And the regency council headed by Mehdi Frageri was put in charge of it. Recep Mitrovica became prime minister.

At the same time, some of the lands of neighboring states were transferred to Albania. About 72 thousand people from northern Albania were then settled in Kosovo - on the land of 10 thousand exiled Serb families. 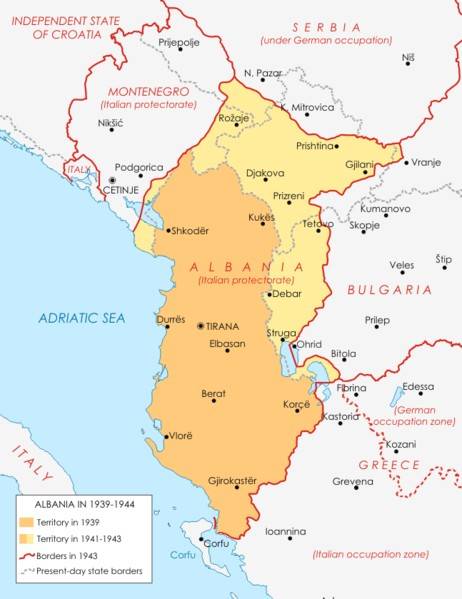 Albania during the Second World War. 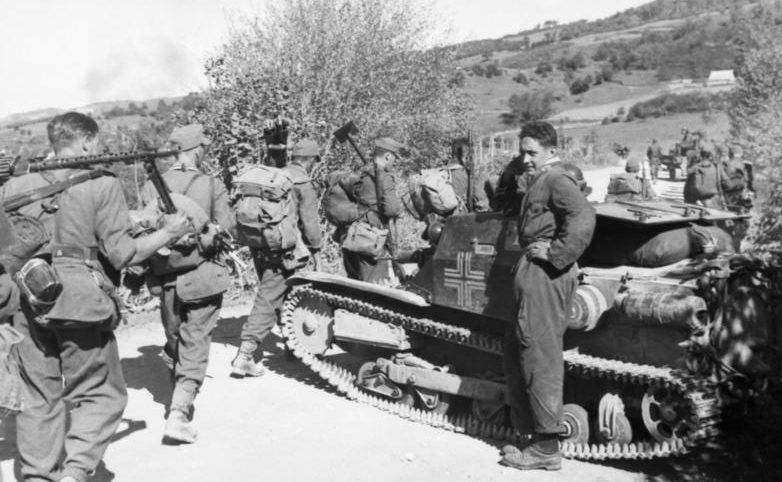 The National Liberation Front, in which the Communists played a prominent role, continued the struggle. The nationalist movement "Balli Kombetar" ended resistance, announcing the former associates

"Traitors", because of whom "the Germans will wipe out our people and our villages from the face of the earth."
One of the Albanian partisan detachments controlled by Enver Hoxha was transferred to the north of Macedonia, where he liberated the city of Debar. What caused an ambiguous reaction in the leadership of the NOAJ.

On the one hand, his actions in areas inhabited by Albanians were beneficial from a military and political point of view. On the other hand, it was considered as

But not all Albanians joined the partisans.

In May 1944, the SS "Skanderbeg" division was formed from the Albanians, the core of which was the Albanian battalion of the 13th SS "Khanjar" division (it was described in the article The accomplices of Hitler and Mussolini and their actions on the territory of Yugoslavia). At first, she was stationed in Kosovo, then transferred to Serbia. And at the end of December 1944 - to Croatia. 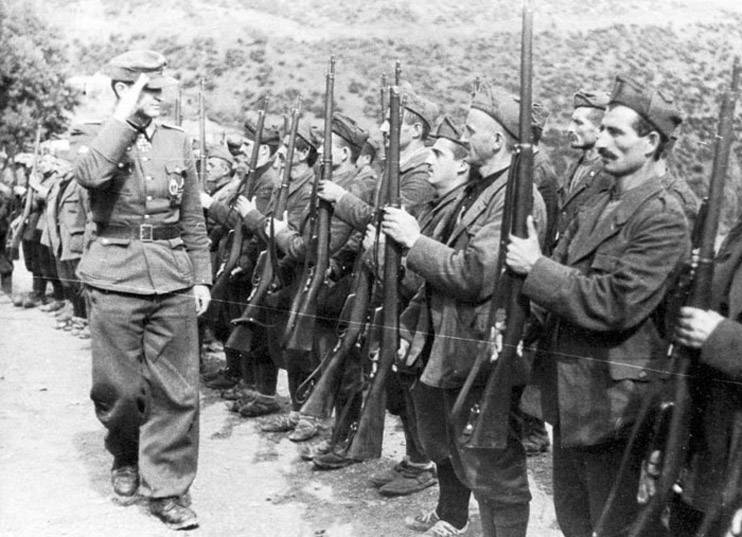 German officer in front of the formation of the Albanians of the SS "Skanderbeg" division.

This division became famous mainly for the massacres of civilians in various regions of Yugoslavia.

German General Fitzhum spoke of her servicemen this way:

"Most of the Albanian army and gendarmerie officers were greedy, useless, undisciplined and incapable of learning."
On September 1, 1944, some units of this division, stationed in Tetovo and Gostivar, rebelled altogether.

And the Albanians killed all the German officers.

As a result, this division (numbering up to 7 thousand people) is considered the worst of all collaborationist formations. None of her military personnel have been awarded the Iron Cross.

But on the other hand, the Albanians of the Skanderbeg division were good at destroying unarmed Serbs and Jews. 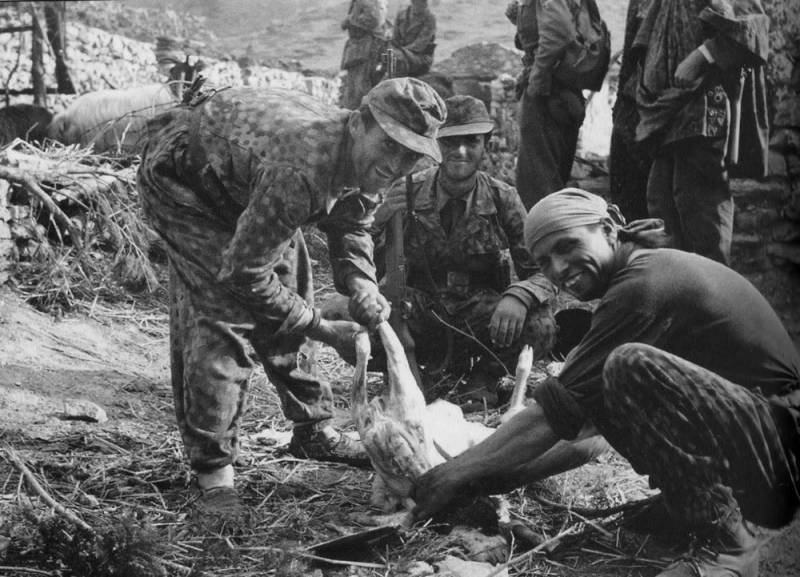 Trophies of the SS division "Skanderbeg".

For example, in the Montenegrin village of Andrievice, Albanians executed 1944 Christians in June 400. And on July 28, they also killed 428 people in the village of Velik.

When it became clear that Germany was doomed, most of this division (about three and a half thousand people) fled.

The rest were transferred to another SS division - "Eugene Savoy" (Prinz Eugen von Savoyen), which fought until May 1945. 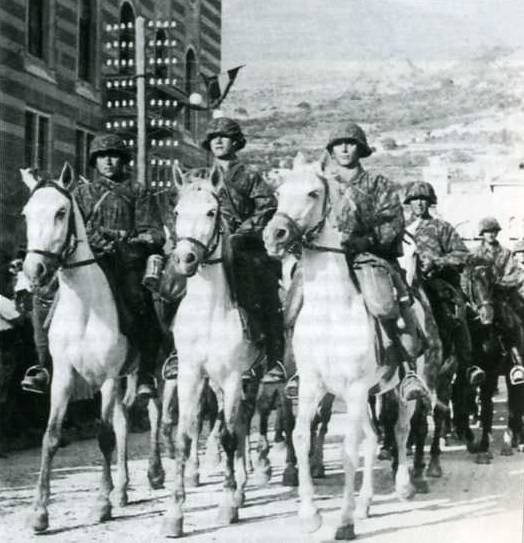 Cavalrymen of the SS Eugene of Savoy division in the Bosnian city of Mostar. 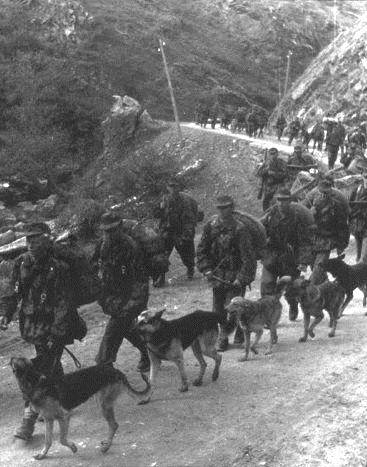 Soldiers of the SS Yevgeny Savoysky division during operations against the Yugoslav partisans.

On May 28, 1944, the Albanian National Liberation Army (24 partisan brigades) launched a general offensive, which ended with the liberation of Albania from German troops at the end of December of the same year. Moreover, practically without the participation of foreign troops (assistance was provided aviation Allies, and the British carried out a limited landing operation in the area of ​​the port city of Saranda).

These actions were facilitated by the fact that (after the withdrawal of Soviet troops to the borders of Romania and Czechoslovakia) the Germans had no time for the Balkans. Many of the units of their army stationed here were sent to the Eastern Front. 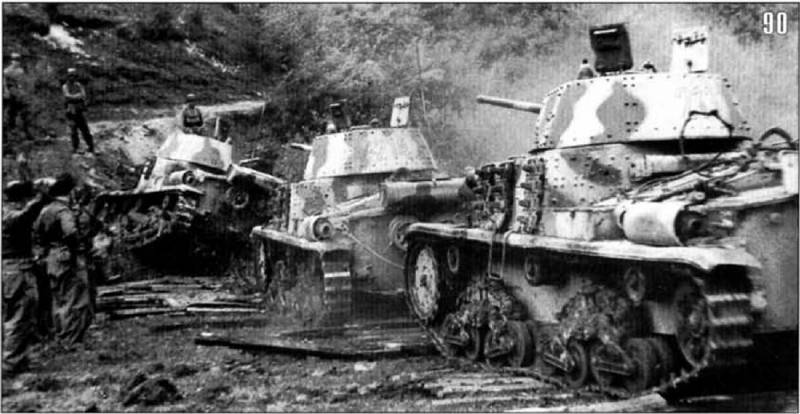 The Cossacks of the 1st Wehrmacht Division under the command of Helmut von Pannwitz continue to fight the partisans in Yugoslavia.

In this photograph, taken in October-November 1944, we see Italian Tanks M-15/42 of the 1st armored company of this division.

About von Pannwitz and the Cossacks subordinate to him was told in the article The accomplices of Hitler and Mussolini and their actions on the territory of Yugoslavia. 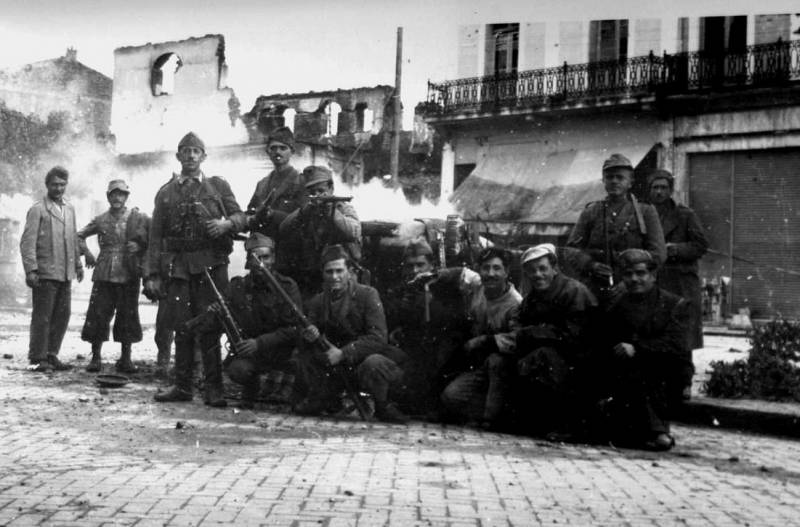 Group portrait of Albanian partisans on the streets of the liberated capital of the country - Tirana.

After that, several partisan brigades of the National Liberation Army of Albania continued to fight in Montenegro, Serbia, Macedonia and even in northern Greece.

In the next article we will talk about the history of Albania after the Second World War: about Enver Hoxha and Hoxhaism, Albania's relations with the USSR, Yugoslavia and China, about "Albanian mushrooms" and social policy, as well as the fall of the communist regime in this country.

Ctrl Enter
Noticed oshЫbku Highlight text and press. Ctrl + Enter
We are
Albanian warrior and commander SkanderbegEnver Hoxha is the last Stalinist in Europe. Part of 2. The leader of a self-sufficient country
Military Reviewin Yandex News
Military Reviewin Google News
86 comments
Information
Dear reader, to leave comments on the publication, you must sign in.