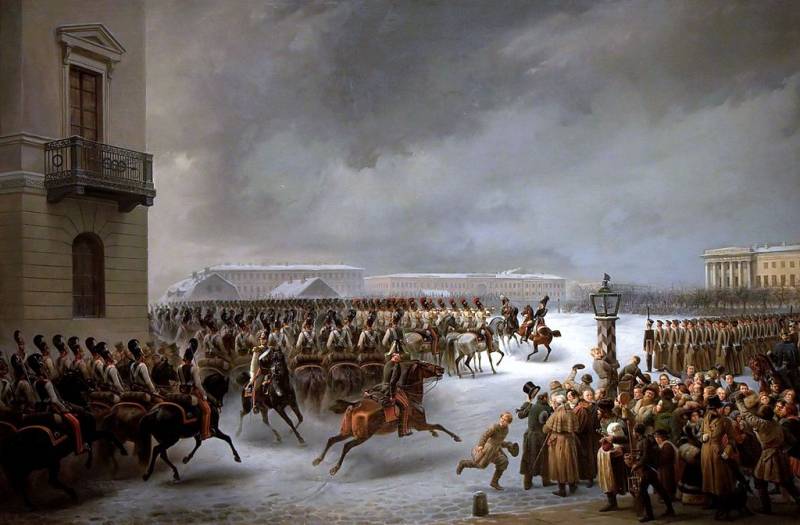 - Then, Lord, erase us from the face of the Earth and create anew more perfect ...
Or better yet, leave us and let us go our own way.
“My heart is full of pity,” said Rumata slowly. - I can not do it.
(It's hard to be god. Strugatsky brothers)
History the first in Russia against the autocracy. There are events of such importance in the past that it was quite possible to fit their description into an article, traditional for Soviet journalism, by the solemn date. But for today they are (how to put it so mildly) a little simple.

And you have to be a very significant figure in the field of historical science in order to give an exhaustive explanation of such an event at the appropriate level of generalization of facts, and even with coined formulations of all the circumstances of time, place and action.

For example, on the website "Voennoye Obozreniye" such an attempt was made in relation to the events of December 25, 1825, known as the Decembrist uprising. And it seems - yes. We were told about them at school. Lenin sealed them with his "far from the people". But ... a lot of time has passed since then. There is plenty of information for today. So to present such an interesting topic in a rather concise presentation, in my opinion, means to a large extent to impoverish it.

And if so, then it makes sense to talk about those dramatic events in more detail. Starting with their premises and ending with ... the consequences. And since I do not have the talent for summarizing complex topics, in this story about the Decembrist uprising, a number of articles will be consistently presented to the attention of VO readers. And how many of them there will be in this cycle - God only knows. This is how the material will go and form into articles ...

Well, today we'll start from the beginning. From what took place in Russia and abroad long before 1825.

And it was that at the end of the XNUMXth century, the Great French Revolution took place in France, with its slogans, as well as with streams of blood, which struck the whole world. And then in Russia the legitimate monarch was once again killed. His place was taken by his eldest son, on whom this villainy (even if he did not know about its possibility at all) simply could not but have a strong moral and psychological impact.

Was Alexander I a decisive sovereign worthy to stand at the head of a great country? In some ways, yes, in others, no.

In the "battle of the peoples" near Leipzig, it was he who achieved the removal from command of the Austrian prince Schwarzenberg. This official (albeit indecisive) commander of the allied armies. And his replacement by Barclay de Tolly. And then he also insisted on the crossing of the coalition armies across the Rhine, although his allies hesitated. And it was he who, in the spring of 1814, convinced them to agree to go to Paris, which led to the fall of Napoleon's empire.

But it was he who at the Congress of Vienna also ensured that Louis XVIII was restored to the throne only after he signed the constitutional charter. 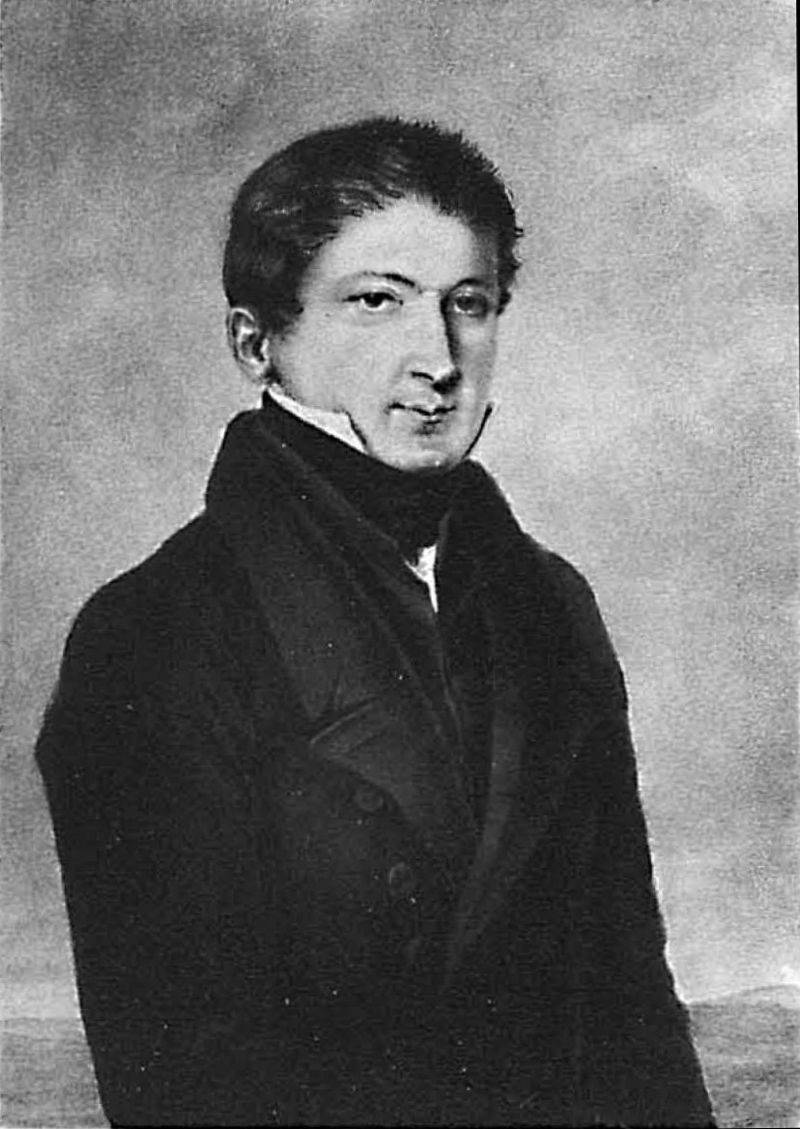 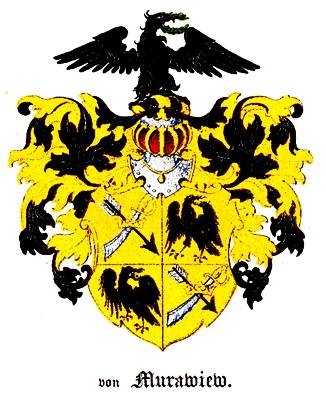 Coat of arms of the Muravyov family
At the same time in Paris, he announced that serfdom would be destroyed during his reign. And at the same time he was heard by many, including his own young officers.

This meant hope in the minds of many that, having won such a victory, the king would rush to even greater accomplishments. Moreover, he himself spoke about them.

And after all he gave in 1808-1809. the constitution in Poland. And in 1816-1819. abolished serfdom in Courland, Livonia and Gotland (Latvia and Estonia). But for some reason he did not cancel it in any way in Russia itself. And this surprised many. And annoying.

The young officers wanted action, not expectation. In addition, they, and even their soldiers, were greatly influenced by what they saw outside Russia during the overseas campaigns of the Russian army. Decembrist A.A. Bestuzhev later recalled that all the troops, from the general to the last soldier, only talked about that: 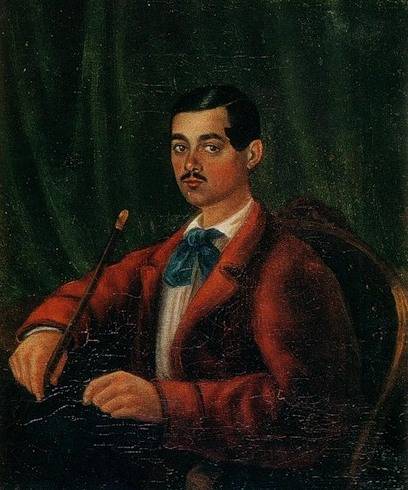 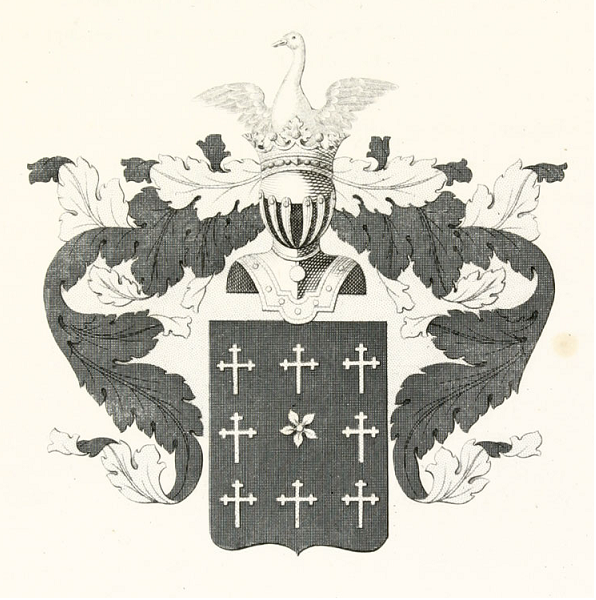 Coat of arms of the Bestuzhev family
And here at the services of educated officers was also the relevant literature: the printed texts of the constitutions of the North American United States and France, the works of I. Kant, G. Hegel, J.J. Rousseau and F. Voltaire, English economists A. Smith and I. Bentham. 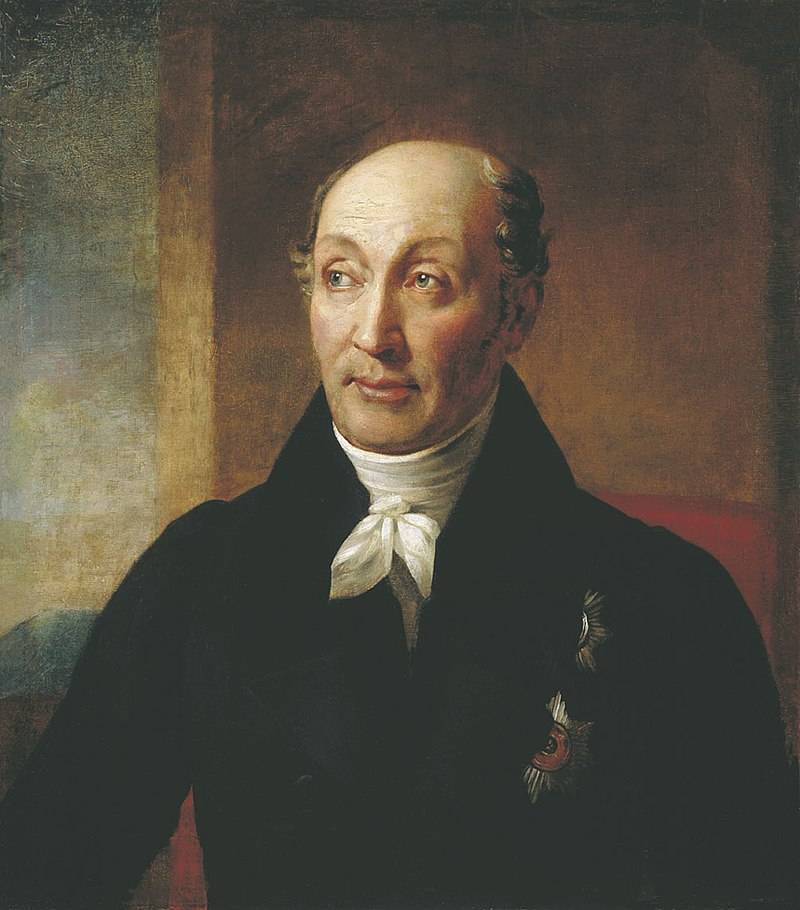 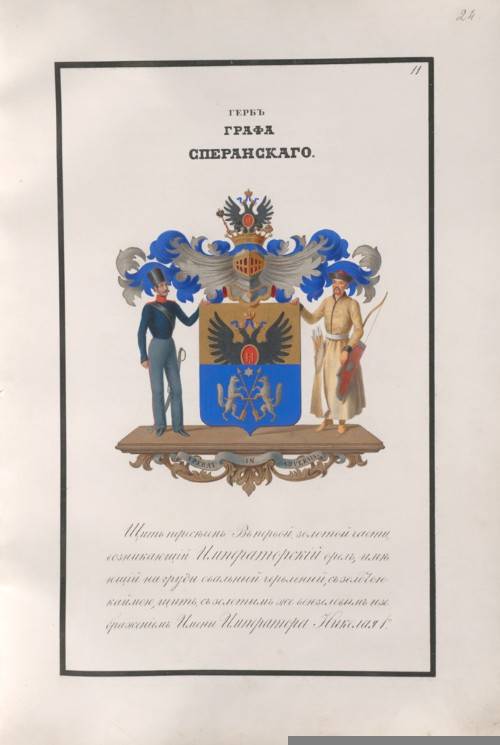 The coat of arms of Count Speransky is included in Part 11 of the General coat of arms of the noble families of the All-Russian Empire. P. eleven
However, knowledge usually prompts action.

And this is how secret societies arose in Russia. In 1816 the Salvation Union was created. And after he self-destructed in 1817, the Union of Welfare was formed (in 1818).

But would these unions have arisen if their members knew that under the tsar there are already two commissions that are fundamentally important for the fate of the state?

The first (NN Novosiltseva) was finalizing the draft constitution: "Charter of the Russian Empire" - the first constitution in the entire history of Russia. And the other (headed by A.A.Arakcheev) was preparing a project for the abolition of serfdom.

The king himself complained that he did not have enough people. But how to believe such a monarch, if the same Arakcheev was his favorite. And what he was doing in his Grudinin was known to all the nobles. And very many condemned him for this. The term "arakcheevshchina" appeared then for a reason. So, even if the future Decembrists knew about this very committee, they would most likely simply not believe in its good beginnings. 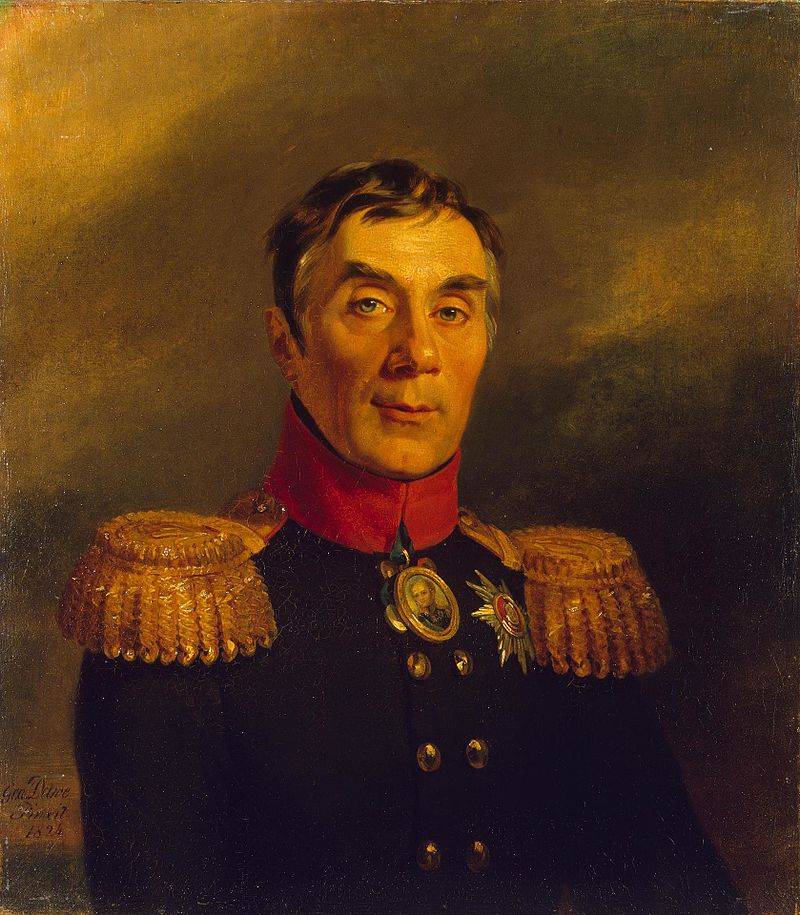 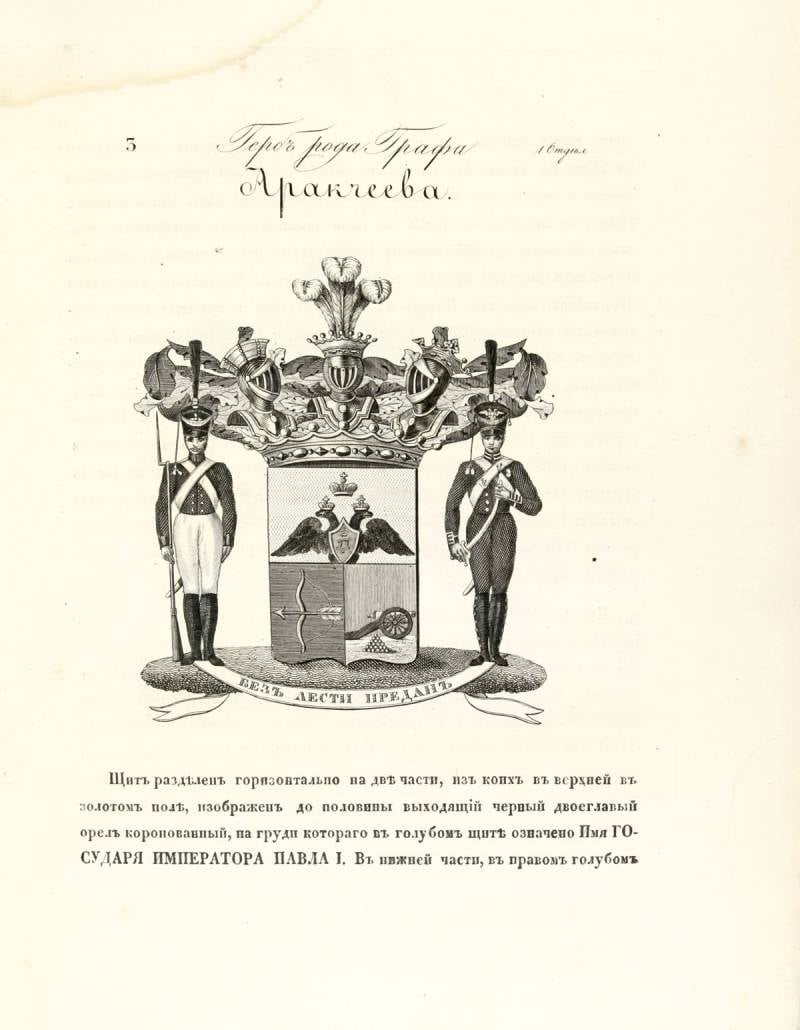 Coat of arms of the family of counts Arakcheev. Included in Part 9 of the General Armorial of Noble families of the All-Russian Empire. P. 36
But let's remember what all this happened in 1820. When a wave of revolutions swept through Europe again. And in Russia itself (and this was completely unheard of) the Semenovsky Guards regiment rebelled, whose soldiers simply could not stand the bullying from their regimental commander.

In 1821, the same N.N. Novosiltsev (already together with M.S. Vorontsov and A.S. Menshikov) developed and presented to Alexander I a draft of the abolition of serfdom. But the king left him without consequences. But he said that he would cancel it precisely during his reign ... 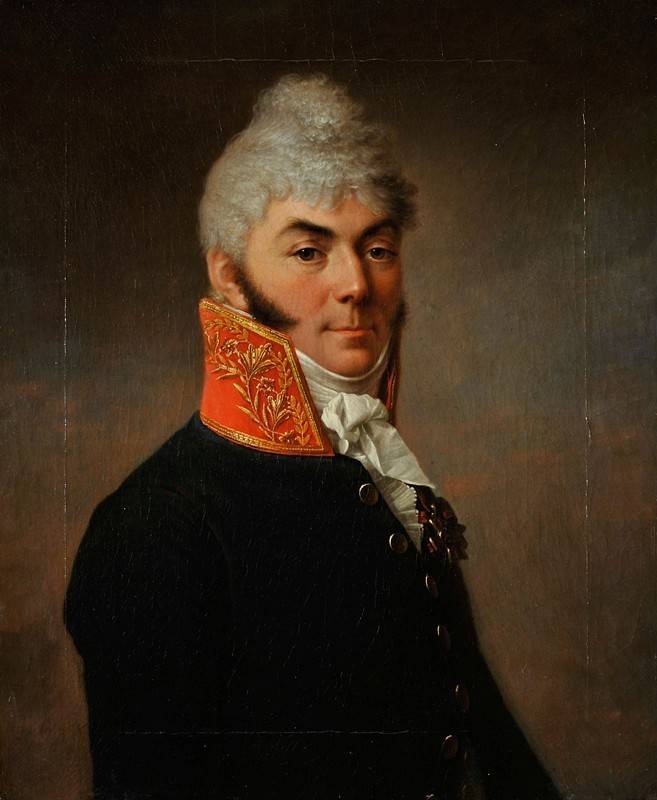 Portrait of N.N. Novosiltsev. The works of S.I. Shchukin. Not later than September 1, 1808 State Russian Museum 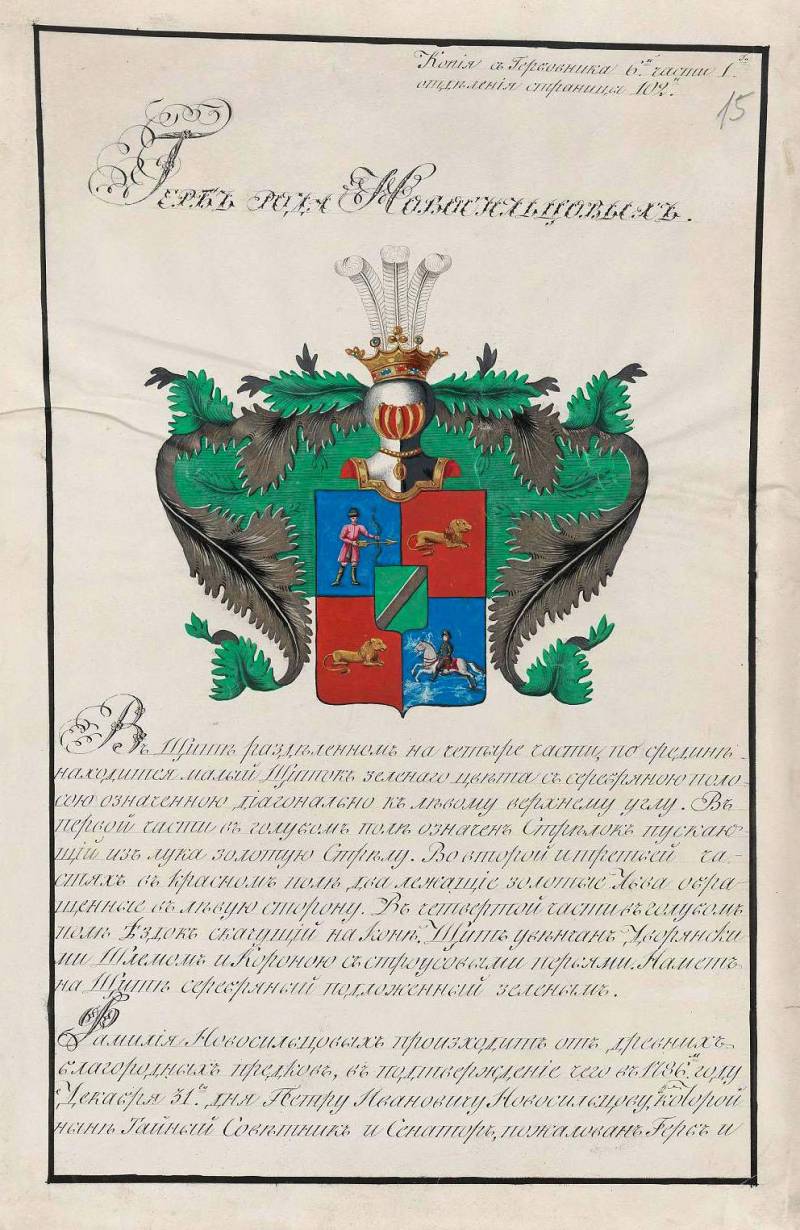 A copy of the coat of arms from the Herbovnik, issued by N.P. Novosiltsev 13.03.1830 Source: Estonian Historical Archives (Eesti Ajalooarhiiv) f. 854, op. 3, d.552
The most interesting thing is that Alexander knew about the existence of secret societies, in which conversations are held on topics up to regicide, and about who is in them. But he did not take any measures against them, stating:

"It's not for me to judge them."
There is a legend that Alexander, broken by the burden of power, did not die in Taganrog, but left his chambers early in the morning and ... left who knows where, hid from the world in Siberia, where he lived and grew old under the name of Fyodor Kuzmich. Grand Duke Alexander Mikhailovich, his grand-nephew, told the story of this tragic and mysterious event in his memoirs. However, it is impossible to confirm or deny his story. Although the sovereign's fatigue from life is perhaps best spoken of by the lines he underlined from the prophet Ecclesiastes in his personal Bible:

"I have seen all the deeds that are done under the sun: and behold, all is vanity."
Well, what kind of unions were they? And what were their goals? 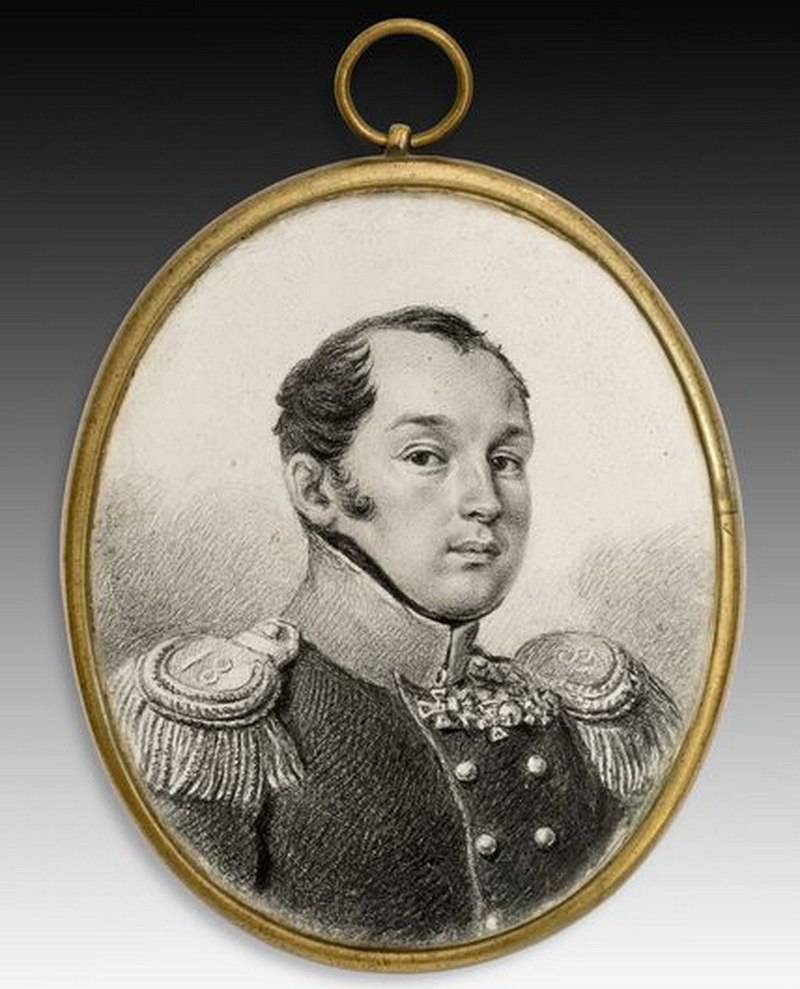 The alleged portrait of P.I. Pestel 1824

The image of the original coat of arms of Pestel on the seal of Boris Vladimirovich Pestel. Source: Troinitsky S.N., ed. "The coat of arms of Anisim Titovich Knyazev in 1785", p. 116, print. 39. SPb, 1912
First of all, we note the small number of the first union. It consisted of about 30 members in total. It was created by the brothers Alexander and Nikita Muravyovs, Matvey and Sergey Muravyovs-Apostles, Sergey Trubetskoy and Ivan Yakushkin.

P.I. Pestel also took an active part in it and created its charter. True, although he was accepted for lack of a better, most of the conspirators did not like it. There was a lot of Freemasonry in him. And all sorts of secret rituals only made it difficult for him to work.

Whatever it was, but one very serious question was discussed there: what to do with the sovereign? And then A.D. Yakushkin directly offered himself to be a regicide. That is, the solution to the issue of reforms in Russia began to be linked to the physical liquidation of the Russian autocrat. And immediately there were people who were ready to carry out this murder! 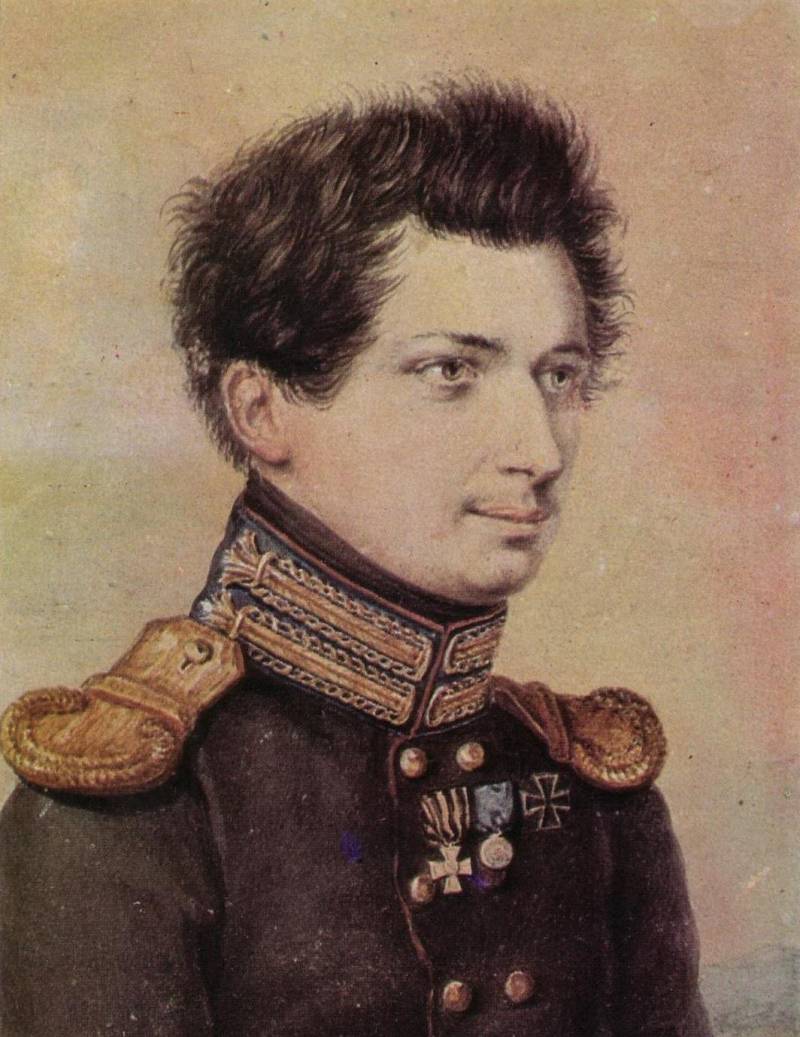 I. D. Yakushkin. Portrait of P. Sokolov
The second was the Union of Prosperity, which was joined by all the participants in the self-dissolved previous union and many others: in total, it had up to 200 people.

His charter - "Green Book" (in color of the cover) was more moderate. It was supposed to carry out the preparation of public opinion within 20 years. After which a revolution was planned - peaceful and painless. In 1820, at one of the meetings, the members of the society unanimously spoke in favor of establishing a republican form of government in Russia. 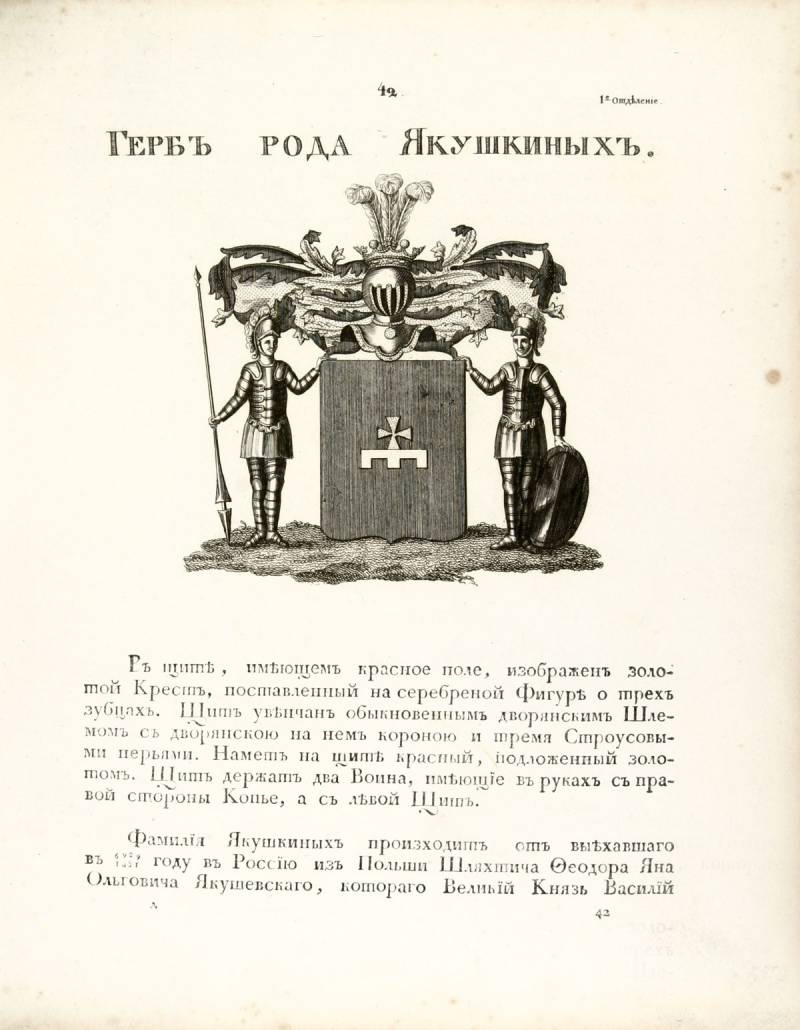 The coat of arms of the Yakushkin family is included in Part 4 of the General coat of arms of the noble families of the All-Russian Empire. P. 42
Soon, however, the future Decembrists learned that the tsar was well aware of the activities of the Union of Welfare. And so they decided to dissolve it.