Descendants of KamAZ-4310: how to keep up with Oshkosh and Volat 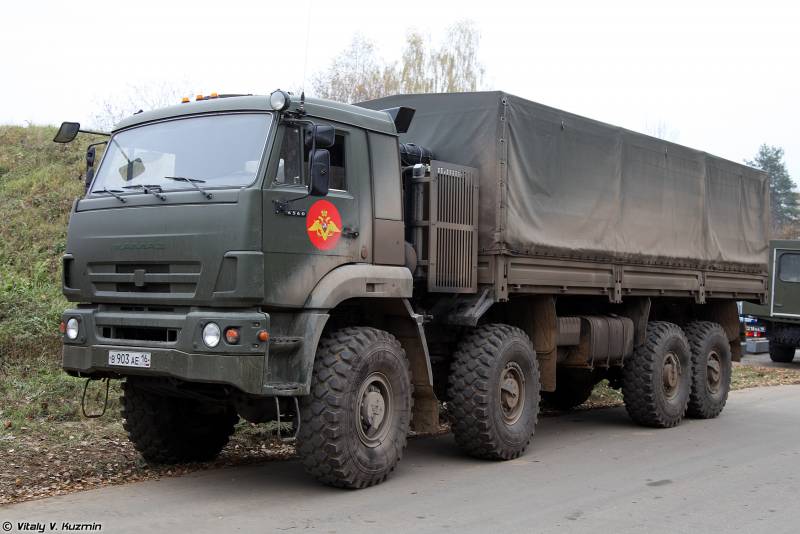 In the previous part stories about the domestic cabover SUV, the discussion was about the development of the Mustang family.

Now the army operates three lines of all-wheel drive vehicles - two-axle KamAZ-4350, three-axle KamAZ-5350 and four-axle KamAZ-6350. Of particular interest is the amphibious modification of KamAZ with the 43501 index, which became a kind of replacement for the retired GAZ-66.

Rumor has it that GAZ Sadko was planned to be the successor. And this is logical - the car is largely assembled on the basis of "Shishiga".

According to one of the versions, during the pile tests (simulation of impact on the ground), the frame of the truck burst. On the other hand, KamAZ provided a much more advanced car. Despite the much larger (than Sadko's) weight of KamAZ, the new landing truck takes on board 3 tons and is equipped with a much more powerful diesel engine.

Initially, the KamAZ-4350 family was planned for the Border Guard Service. And for the landing modification, it was necessary to lower (wheel arches appeared) and slightly shorten the cargo platform. As a result, the rather big KamAZ fit into the P-7M landing platform and in 2007 passed the tests quite successfully. Several hundred landing KamAZ trucks are now in service with the Russian army. 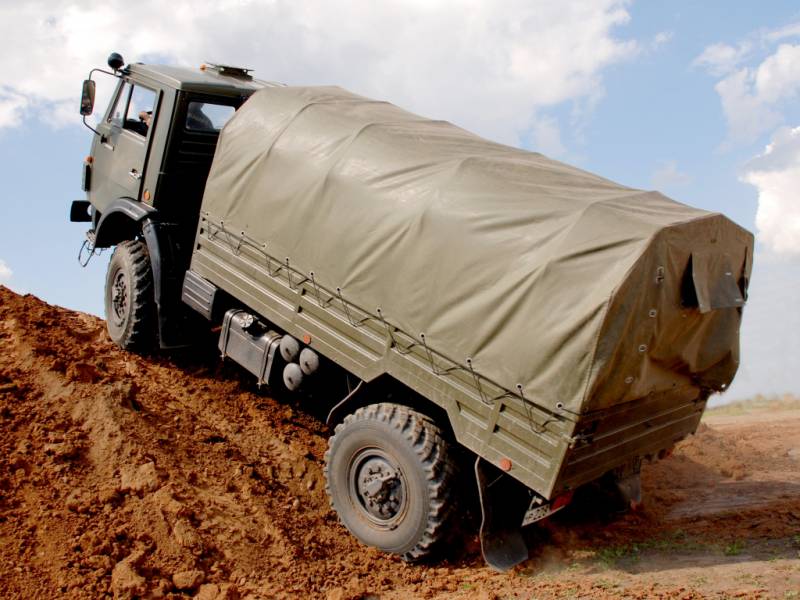 At the top of the line is the KamAZ-7560 with a 400-horsepower diesel engine and an automatic 16-speed gearbox. For the Pantsir-S anti-aircraft systems, a hybrid of these two KamAZ-6560 models with a 740.35-400 diesel engine is used as a wheeled platform.

There is an onboard version of the car equipped with a 16-speed manual transmission. But the heavy KamAZ for "Pantsirey" is simply stuffed with foreign components, in particular, it is equipped with the Bulgarian bridges Madara. 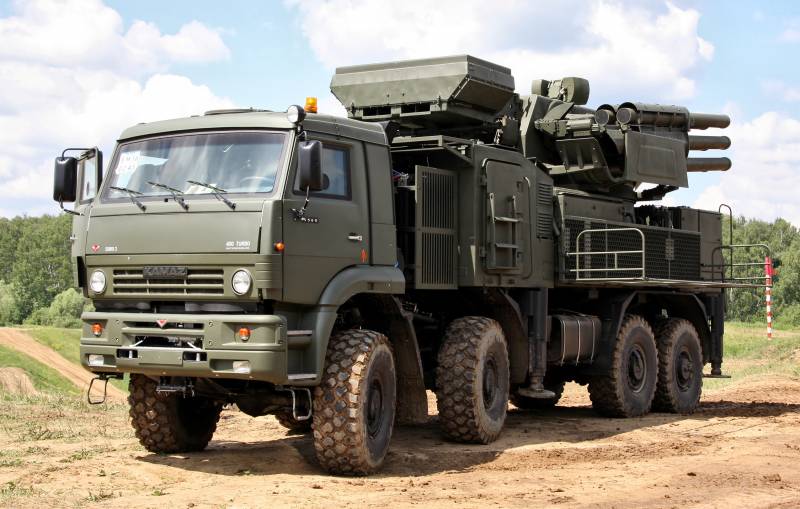 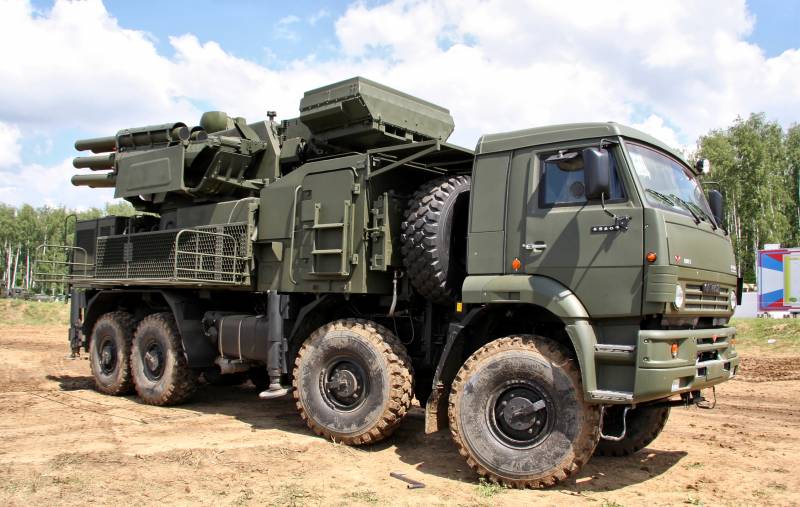 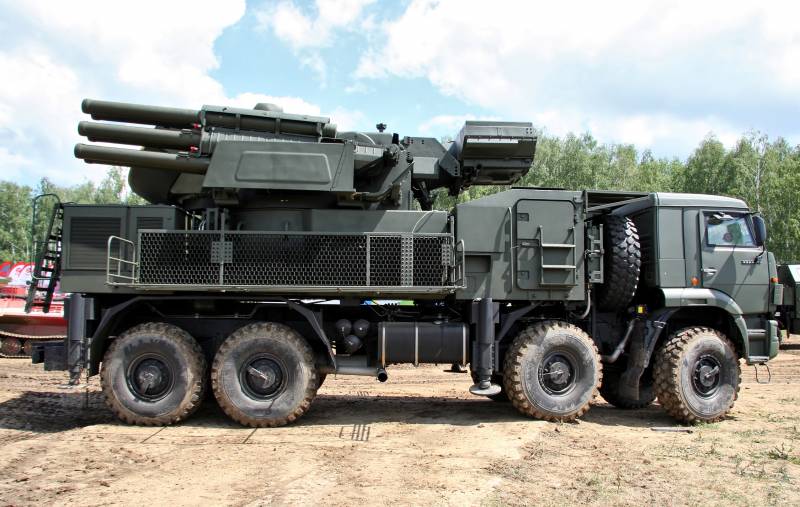 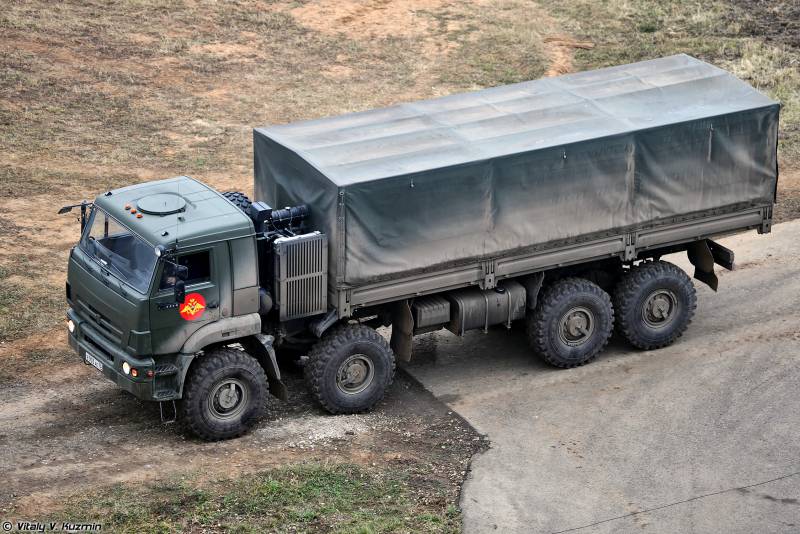 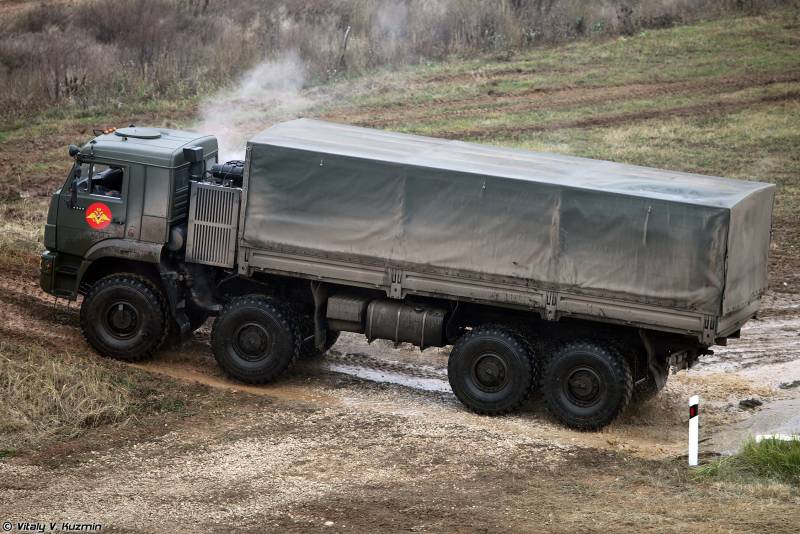 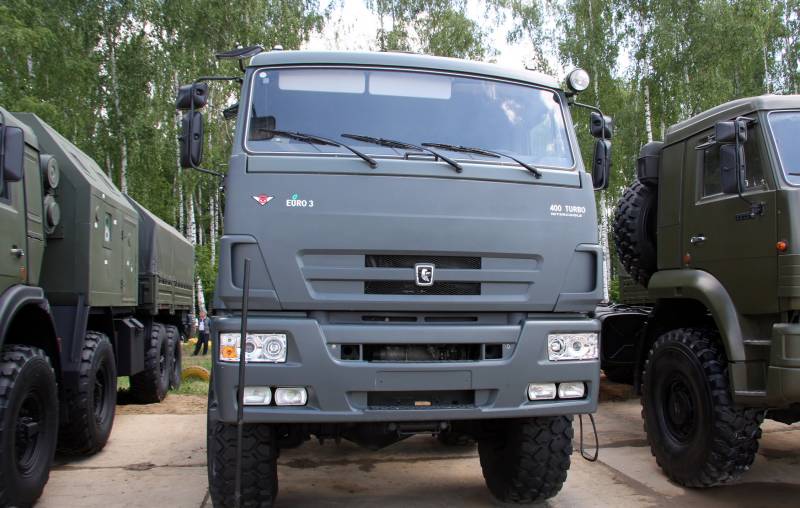 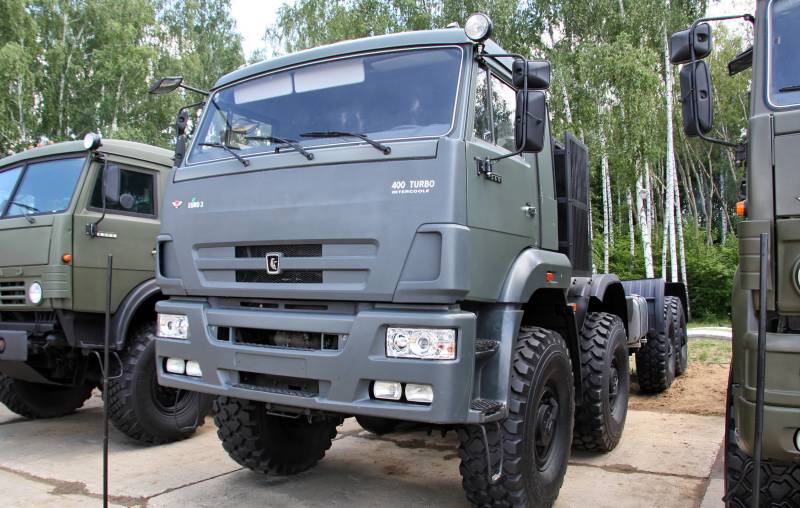 Onboard KamAZ-6560 and as a platform for "Pantsir-S1". Photo: Vitaly Kuzmin, vitalykuzmin.net
Often in the army, you can see KamAZ-6560 with dismantled import units and installed instead of Russian "import-substituted" analogs.

All this testifies to the moral and technical obsolescence of the Mustang family cars. The year is 2021, and in Naberezhnye Chelny they could not create a family of cars that fully meet the requirements of the Soviet army.

Until now, there is no own automatic transmission, a serial torque converter and independent suspension. The fact that engineers from Naberezhnye Chelny are frankly marking time in the niche of multi-purpose army trucks is evidenced by the level of modern foreign analogues. 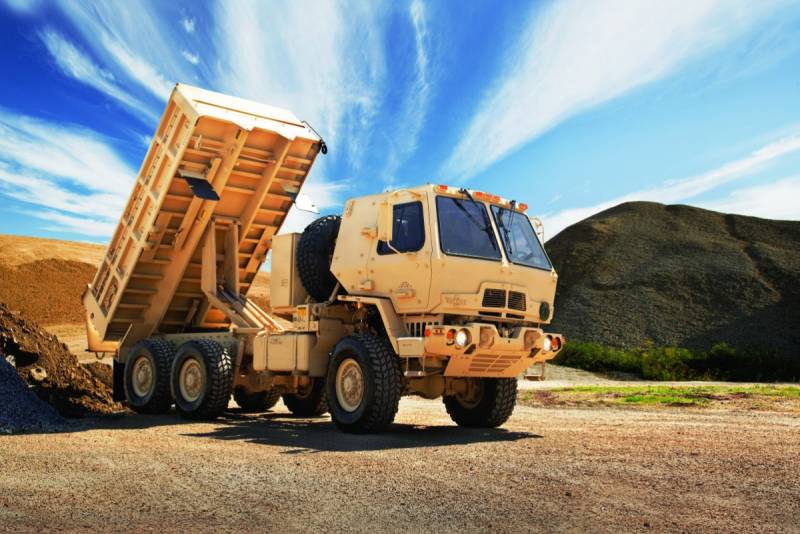 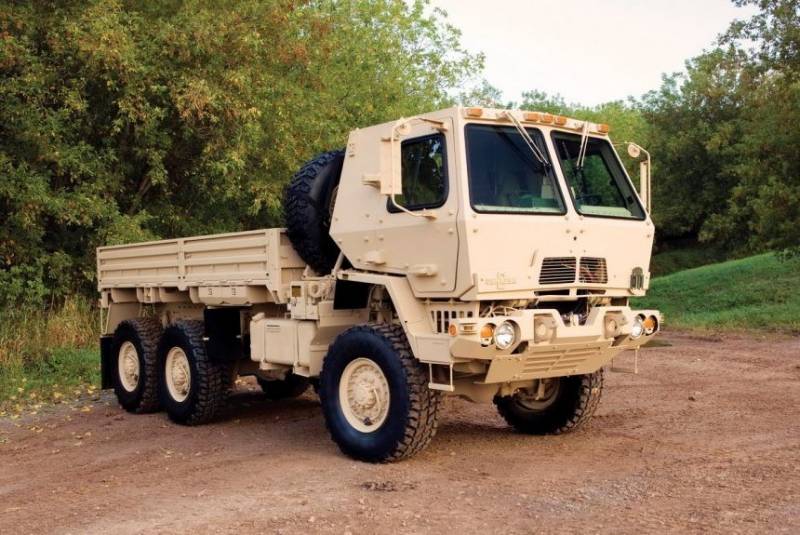 Cabover FMTV from Oshkosh is the overseas analogue of the KamAZ-4310 family. Source: autoreview.ru
Take, for example, the development of the American company Oshkosh, whose products can be conditionally called analogues of domestic KamAZ trucks.

In 1996, the US Army began delivering a cabover truck FMTV (Family of Medium Tactical Vehicles), which was developed on the basis of the Austrian Steyr 12M18. In many ways, this is a car similar to the Mustangs - carrying capacity from 2 to 9 tons, dependent suspension and wheel formulas to choose from: 4x4 and 6x6.

Among the differences are a fully armored frame-panel cabin in the latest series and an automatic transmission. The trucks were originally manufactured by Stewart & Stevenson, and later the entire production was completely moved to Oshkosh. In total, the American army now has more than 110 such vehicles. The experience of local conflicts showed the inferiority of the cabover layout of the car. And a couple of years ago, the first "hoods" Oshkosh FMTV A2 went to the US Army. 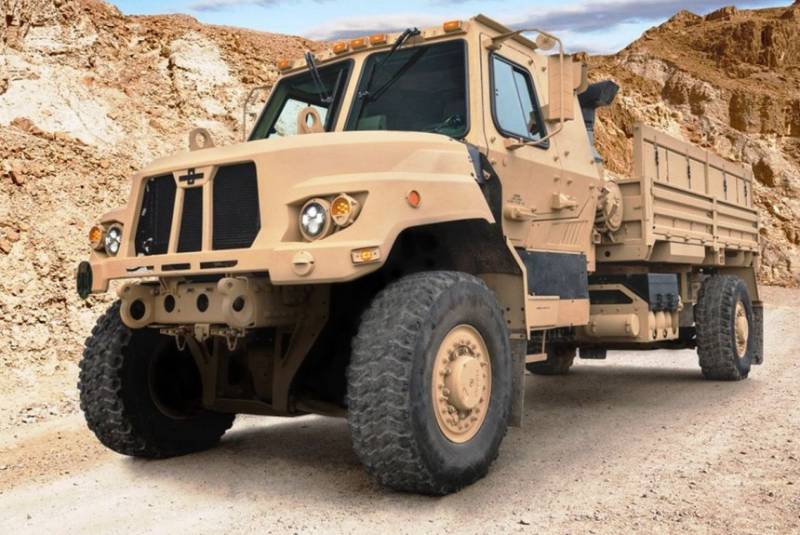 The American army is gradually switching to the Oshkosh FMTV A2 bonded multipurpose trucks with the TAK-4 proprietary independent suspension. Source: autoreview.ru
The recipe for creating a truck is quite simple. The base armored cabin was moved inside the base, and the engine was carried to the front axle, covered with a fiberglass hood.

Something similar was organized in the Soviet Union in the 80s and 90s with the promising Land project. Then in Miass they planned a new generation of bonnet "Urals" based on the KAMAZ cab, but in Naberezhnye Chelny they decided not to share their products with competitors.

Let's return to the new bonneted (or rather, even half-bonded) Oshkosh, the highlight of which is the proprietary independent suspension of all wheels TAK-4. As you know, this seriously increases the tactical mobility and maneuverability of vehicles. Another truck from Oshkosh, known as MTVR, is equipped with a similar suspension. But he is already a competitor to the heavy Miass Urals of the Tornado-U series.

Evil tongues will say that these are Americans - they have more money, and production experience is much richer. Like, it is impossible to compare the capabilities of the domestic automotive industry and the trendsetters of the global technical fashion. This is partly, of course, true.

But let's look in the direction of neighboring Belarus, which has less money than Russia, and its competencies developed in many ways simultaneously.

Several years ago, the Minsk Wheel Tractor Plant rolled out a whole line of new machines of the Volat-6001 family. This is how Russian Mustangs of the XNUMXst century should have looked.

The assortment is presented in three models - 4x4, 6x6 and 8x8. All trucks with independent spring suspensions, and two older models (MZKT-600100 with GVW up to 24,8 tons and MZKT-600200 up to 34,4 tons) with automatic hydromechanical transmissions of local production. Frame-panel cabins, greatly simplifying the booking process.

Export machines are equipped with Caterpillar engines, but they can also switch to the products of the Yaroslavl Motor Plant. By the way, the transmission and independent suspension from Belarus migrated to the Russian Ural-Typhoon armored vehicle practically unchanged. 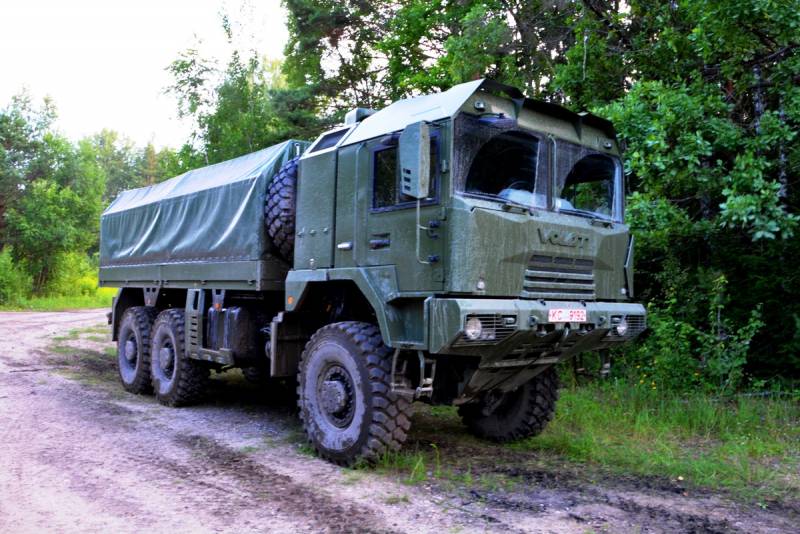 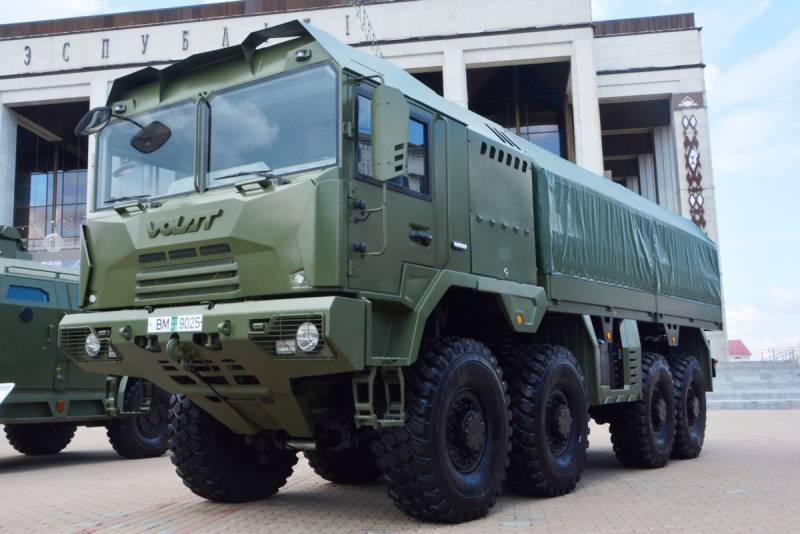 The Belarusian vehicle, which was progressive in all respects, was not put into service, although the older brothers, the missile carriers, serve quite regularly in similar conditions.

Of course, reducing the dependence of the domestic army on foreign equipment is right. But only if there is an adequate replacement. In this situation, it was decided to purchase obsolete "Mustangs" KamAZ-6350.

At the Army-2020 forum, a wide range of 8x8 wheeled vehicles for the Strategic Missile Forces was presented: a missile armament control vehicle (unit 15V380), a guard and defense shift vehicle (unit 15V395) and a mobile technical control center (unit 15V379). A similar platform is also used for the installation of a mechanized set of operational deployment of temporary roads and an experienced heavy mechanized bridge TMM-7.

The most surprising and sad thing in this regard is that KamAZ currently does not have an adequate replacement for the outdated Mustangs. Even in the form of a technology demonstrator or experimental prototypes.

The strategic lag of the Russian army in the multipurpose truck segment is becoming more and more threatening.

By the way, a similar situation has developed in the segment of high cross-country tank vehicles. The only now KamAZ-65226 truck tractor for military needs is very conditional and is designed only for the transportation of semi-trailers on public roads.

The widely advertised program for the creation of special wheeled chassis and tractors "Platform-0" does not show signs of life at all. Although in the spring of 2019, the giant electric ship 16x16 KamAZ-7850 was put into service. 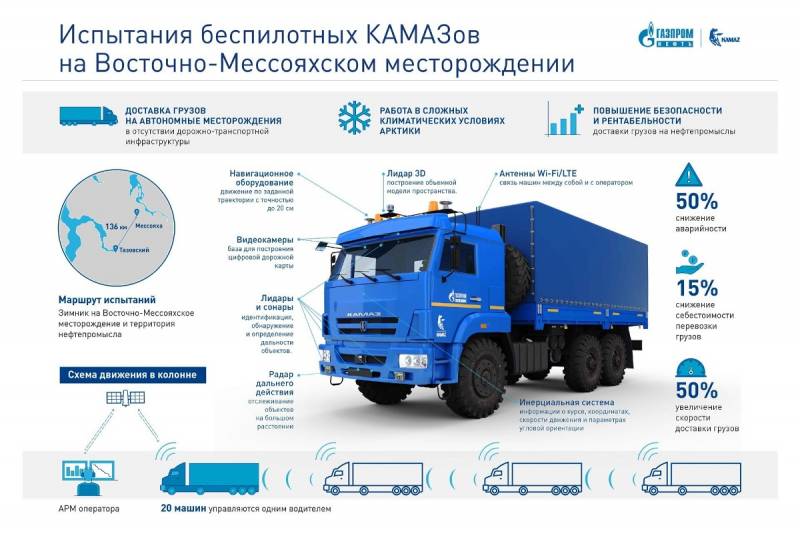 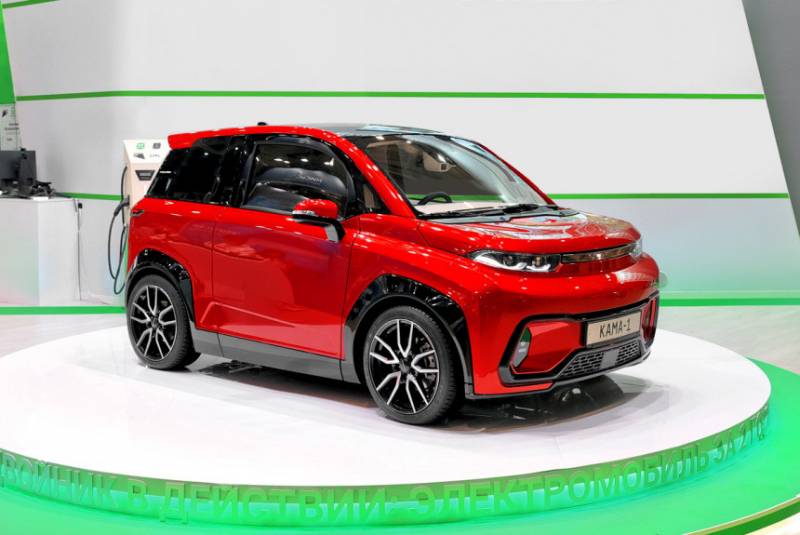 The Ermak all-terrain drone and the Kama-1 electric car are the latest developments from Naberezhnye Chelny. And again on foreign components. Source: autoreview.ru
What is KamAZ doing now?

Of News it is known that engineers have developed the Kama-1 electric car, utopian for Russia. Apparently, the KAMAZ employees are haunted by the dubious fame of the Prokhorov Yo-mobile. And one more fashionable novelty is the robotic four-wheel drive KamAZ-43118 of the Ermak project, capable of autonomously moving in convoys.

Of course, the direction is promising. But the entire hardware base (lidars and radars) is foreign and bought for currency. And the hydromechanical transmission, in general, is Allison, since the domestic one has not been developed, and the robotization of equipment with "mechanics" is, in principle, impossible.

With such a busy schedule of design work, KamAZ engineers obviously do not have the time and energy to deal with projects that are really urgent for the Russian army.

There is also a second explanation for this paradox - Russian military officials are simply in no hurry to renew their army vehicle fleet.

In this scenario, the story is like high treason.