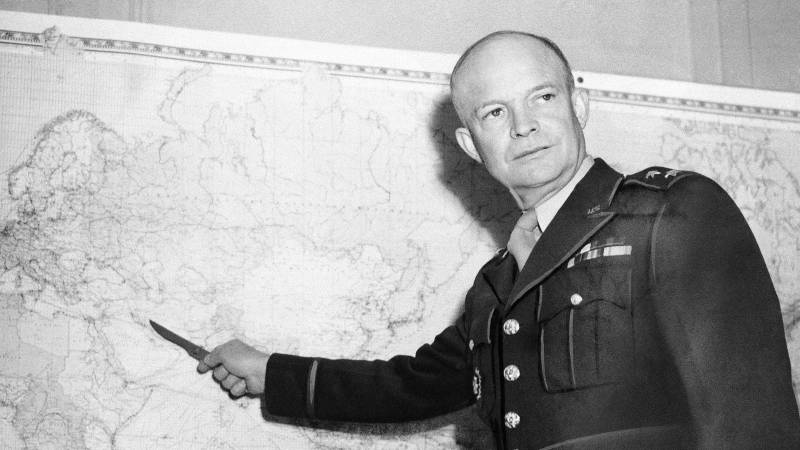 Dwight D. Eisenhower, 34th President of the United States, came to power on promises to strengthen the country's shaken authority in the international arena. The main troublemaker for Washington in late 1952 and early 1953 was the Soviet Union. Moscow had a significant nuclear potential, although not the size of the American one, and a "business idea" of spreading communism across the planet. China, Korea, the countries of Eastern Europe are the key regions in which the ambitions of the United States indirectly or even directly collided with the interests of Moscow. Eisenhower's predecessor Harry Truman in 1952, opponents accused

in the loss of the world so dearly gained during the Second World War. The moral incentives and hopes for a better world that sustained us during World War II were deceived, and this gave communist Russia a military and propaganda initiative that, if not held back, will destroy us. 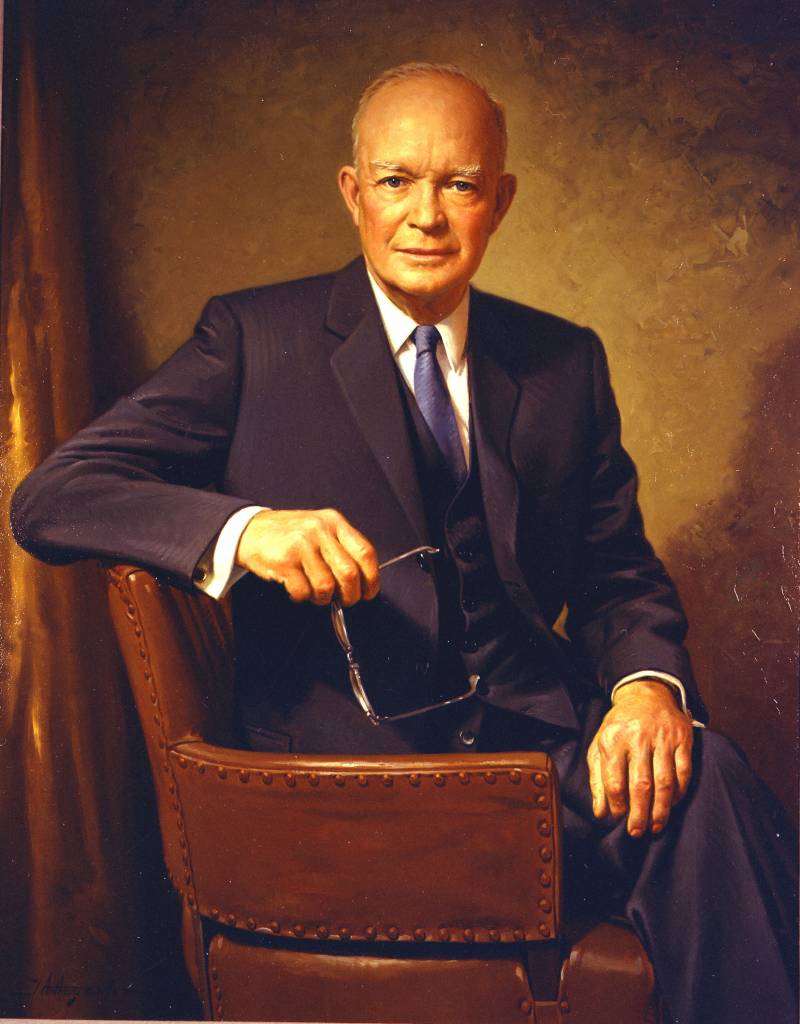 34th US President Dwight D. Eisenhower. Source: dic.academic.ru
Among the steps to counter the threat from the east, Eisenhower, in particular, proposed creating an analogue of the Vlasov army or a foreign legion - the Freedom Volunteer Corps. For this, it was supposed to select defectors dissatisfied with socialism from the countries of Eastern Europe. We must pay tribute to the president, he was very optimistic and expected to recruit no less than a quarter of a million volunteers into the ranks of "freedom volunteers". The fighting unit was to be a lonely young man - Pole, Romanian, Hungarian, Czech, Soviet citizen, or a fugitive German from East Germany. The main requirement for recruits was a keen desire to fight for the liberation of the homeland from the communist regime. Eisenhower also planned to save money on such an army - the salary should have been more modest than in the American army. After three years of impeccable service, the volunteer could count on US citizenship and service in the regular American army. 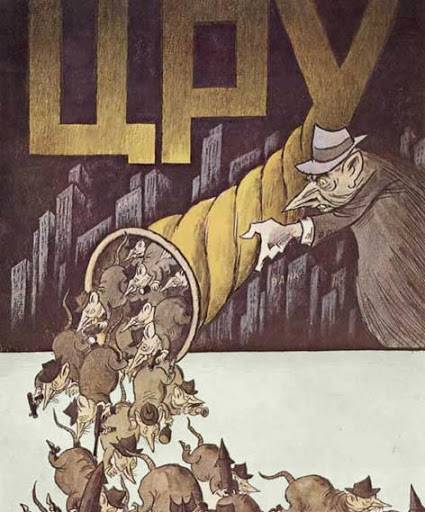 Source: opoccuu.com
The Central Intelligence Agency prepared an appropriate analysis of Moscow's possible opposition to Eisenhower's initiative. Intelligence has suggested that the Kremlin will not go to a serious aggravation of relations and will limit itself only to propaganda actions and tightening border controls. However, Eisenhower's European colleagues in France and the Federal Republic of Germany did not at all share the optimism regarding the deployment of an army of thousands of "combat volunteers" near the borders of the countries of the socialist bloc. Overseas, they rightly judged that in the event of an exacerbation, Soviet nuclear bombs would fall on European capitals and the innovation of the US President was deployed.

Brainstorming at the White House

The Kremlin has been the main headache in American foreign policy, and since the Soviet Union's nuclear weapons this ailment only intensified. Washington was no longer ready to arrange an atomic skirmish. President Dwight Eisenhower and Secretary of State John Dulles agreed that there would be no winners in such a war. At the same time, the search for ways to "contain communism" required non-trivial solutions. The United States would not have had enough resources to simply build up conventional armaments and use force to suppress the spread of socialism so fashionable in those days. Dulles was seriously afraid of provoking Moscow to retaliate and expected in this regard the growth of national liberation currents in the once neutral countries. As a result, they chose the path of building up their nuclear potential and intensifying anti-communist propaganda around the world. In January 1953, the new president organized a "Special Committee on Information Policy", which was engaged only in the analysis of information and psychological work of the United States in the postwar period. The Voice of America radio station, founded in 1942, received an additional impetus in 1953 and became the main mouthpiece of American propaganda in the countries of the socialist camp. Up to 63% of the annual budget of $ 22 million for radio stations was spent on broadcasting for the USSR and the countries of Eastern Europe. 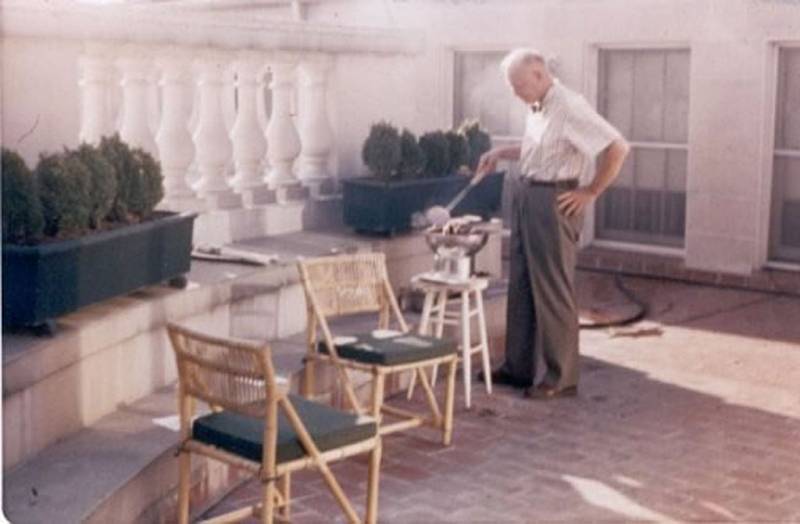 Eisenhower prepares quail. Source: en.wikipedia.org
In short, the US policy towards the Soviet Union was fearful of provoking Stalin and intensifying anti-communist propaganda. The initiative in bilateral relations has so far been on the side of Moscow.

With Stalin's death, Washington decided it was time to act. But how? At a meeting of the National Security Council on March 4, 1953, they could not agree on the first steps of the United States. They attracted specialists from Princeton University and the Massachusetts Institute of Technology, who advised once again to strengthen propaganda work and morally corrupt the top leadership of the countries of the socialist bloc and the USSR. To do this, it was supposed to play on the subtle nationalistic feelings of the party leaders, pushing them to the collapse of the country from within. Among the recommendations were advice to sit down with Moscow at the negotiating table, which Eisenhower rejected, they say, is not the time yet. To fully understand the US strategy of actions in the unfolding arms race, on May 8, 1953, the President gathered his closest devotees from the National Security Council in the White House solarium. The brainstorming idea, which was born then, was named in a non-trivial way by the place of the meeting - Project Solarium.

"We don't need to be loved"

Dwight D. Eisenhower instructed groups of analysts from the National Security Council for six weeks to work out possible scenarios for further relations with the Soviet Union. Moscow was rapidly closing the gap with Washington in nuclear potential, and this prompted some Americans to think badly. Eisenhower was quite specifically offered to inflict a series of preventive disarming nuclear strikes on the territory of the overseas enemy. The motive was simple - to crush the USSR until it was able to respond adequately. The bearers of these ideas were "hawks" - marginalized, to whom the veteran of the Second World War Eisenhower, fortunately, did not listen. Instead, soft and not very options for the development of relations with Moscow were to be developed within the Solarium project.

Solarium of the White House. Source: nps.gov
Divided into three groups. Group A, led by former US ambassador to the USSR, George F. Kennan, was involved in a scenario of peaceful rivalry with Moscow. At the same time, it was important to save budget money - in Washington they seriously believed that the "cold war" would tear the country apart. Group B, led by atomic weapons expert Major General James McCormack, developed a theory of "red lines" for the Soviet Union, breaking over which would inevitably provoke a world war. And finally, Group C, whose chief was Vice Admiral, President of the Naval College Richard Connolly, planned a scenario of decisive opposition to Moscow on all fronts. In the latter scenario, the risks of a nuclear catastrophe were the highest.

Kennan's team on July 16, 1953, at a general meeting of the National Security Council, presented a "containment strategy" for the Soviet Union through expanding contacts with neutral countries. Actually, the goal was simple - to block the further expansion of communist influence on countries through the widespread implantation of the benefits of capitalism. Trade relations were to become the main weapon against the Soviets. They did not forget about propaganda. The Soviet planning and distribution system and the idea of ​​"the inevitable victory of communism throughout the world" were negatively assessed. Kennan and his team did not come up with anything new - the concept repeated the strategy of containing the Soviet Union of the previous President Truman with minor adjustments. Team A's case also involved negotiations with Moscow regarding the fate of Germany. The party leadership of the USSR was asked to agree to the reunification of the two Germany and the creation of a neutral state. The idea for the 50s was downright crazy. Any sane person understood that if the GDR became part of a neutral state, then it would immediately become capitalist.

James McCormack and Group B presented the concept of ultimatum rhetoric with the Soviet Union to the president. According to analysts, the Kremlin should have clearly delineated the lines beyond which the spread of communism was impossible on the globe. Otherwise, the American leadership will not be able to vouch for itself. It is not a fact that nuclear missiles and bombs will be used, but the opposition will be very serious. It will not be easy to rally the US allies around itself under such a scenario (few will have the desire to get hit by a Soviet nuclear strike), so Washington intends to confront Moscow face-to-face. Defense funding for McCormack required adjustments - less for conventional weapons and no longer atomic weapons.

Team C was the most belligerent in its rhetoric. The program was aimed not only at countering and containing the USSR, but also at its collapse from within. The CIA added firewood to the Cold War with its predictions for 1958, in which Moscow is expected to reach nuclear parity with Washington. Until that time, tough steps were required - to overthrow the government in the USSR, China and the countries of the socialist camp. Team C's real slogan is:

In fact, a full-scale and extremely costly war for Americans against Bolshevism around the world was proposed. The head of the team, Vice Admiral Richard Connolly, even allowed a dialogue with the Kremlin, it was only from a position of strength. The belligerent analysts understood perfectly well that the Soviet Union would not leave such attacks unanswered, and indicated the high risks of a nuclear war. But in the presentation, they clarified that

such a strategy, while not designed to provoke war, allows for a substantial risk of war if justified by the successes achieved.

What successes the United States could justify the third world war, the report did not mention.

We must pay tribute to Eisenhower, he did not give a go to the developments of the militant group C. Just as he did not give a go to the ideas of the other teams of analysts. The final document NSC 162/2 contained only elements of the Solarium project, and the overall tone of the new US strategy towards the communists was rather restrained. The President understood that the Kremlin now had the initiative, so the security and stability of the American economy came to the fore for him. Another war, even like the Korean one, was not needed by the presidential administration. Recall that the overly belligerent Harry Truman did not run for a second term because of the bloody war in Korea for American soldiers. Eisenhower brought down the "hawks" in his own administration and rallied moderate politicians around him. The prospect of a retaliatory strike from the Soviet Union was an important sobering factor for the hot heads of the Pentagon and the State Department. Eisenhower's military history should not be written off either. He knew firsthand what a world war was, and this, of course, stopped his rash steps.

Ctrl Enter
Noticed oshЫbku Highlight text and press. Ctrl + Enter
We are
Who and what made Patriotism of General Vlasov? Part twoEisenhower death camps
Military Reviewin Yandex News
Military Reviewin Google News
57 comments
Information
Dear reader, to leave comments on the publication, you must sign in.