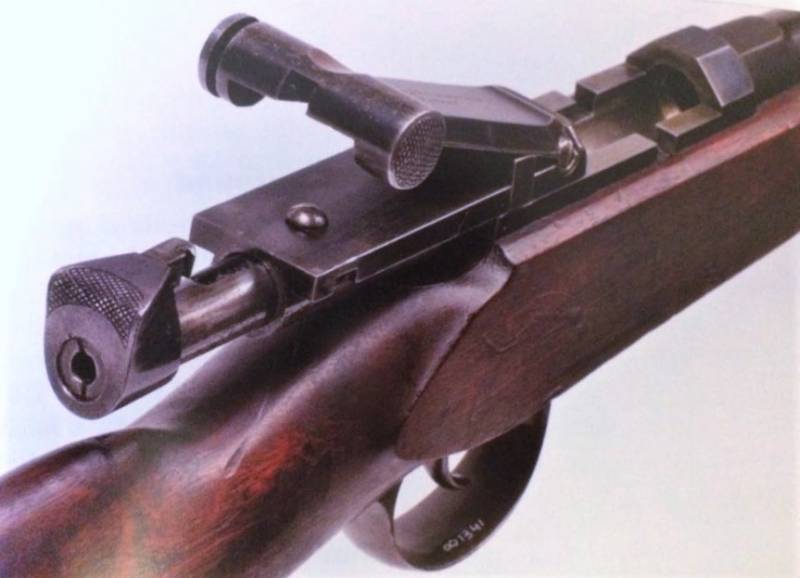 The third design of the Poppenburg slide, patented jointly with John Benson in December 1866 (patent # 3382). The T-shaped lifting lever of the bolt, the grooves for its attachment in the receiver and the corresponding projections on the bolt are clearly visible. Photo by Mathieu Willemsen, curator of the War Museum in the Netherlands from the Armourers bench website

Further development of small arms weapons in Russia, after abandoning the Green rifle, it continued to follow its own, and rather original way. While the rest of the states introduced reworking systems for a metal cartridge, we were still trying to get a reworked needle rifle ...

Soldiers, brava guys,
Where are your wives?
Our wives are loaded with guns
That's where our wives are.
(Russian folk song)
Russian rifle drama. All this is true, of course, and “loaded guns” is good. But in order to load them, you need to have them, moreover, to have guns that would be loaded in a new way. But they have not yet existed in Russia. But they were looked for and very responsibly. So, simultaneously with the Green's rifle, 120 rifles of the Belgian gunsmith Gillet arrived in Russia, and they were also double-bullet. The caliber is 13,21 mm for both the rifle and the pistol of the same design. But ... Green's rifle was unlucky, and Gillet did not succeed in reaching Russia. True, his gun was improved by our master Trummer, so that it even began to be called by a double name - Gillet-Trummer. But his participation did not give anything either. A cross was laid on two-bullet systems in Russia, although the military liked them for the cheapness and availability of the cartridges used in them. 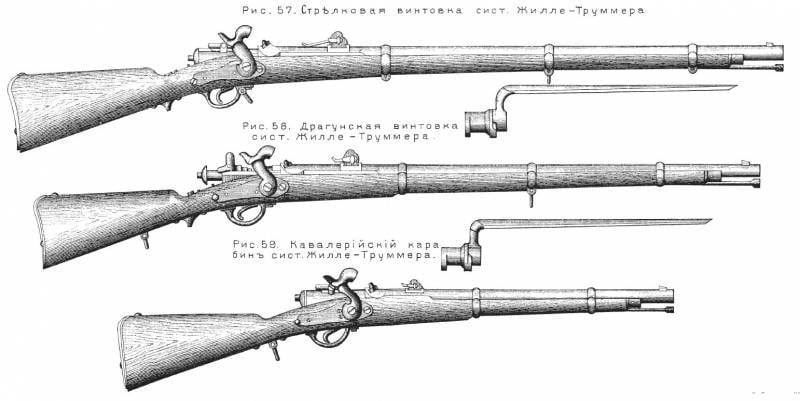 Gillet-Trummer rifle set. Fedorov V.G. Atlas of drawings for "Armament of the Russian Army in the XIX century". 1911 year
Then the Terry rifle arrived in Russia, which the Tula gunsmith Norman undertook to improve and ... improved so much that in 1866, under the double name of Terry-Norman, was approved as a model for converting all our six-line rifles. The cartridge for it was again made of paper, but with a folder tray and a felt wad. Neither the barrel nor the trigger has been changed. Just a cylindrical sleeve with an oval window for inserting a cartridge was screwed onto the barrel, inside which a cylindrical bolt moved, controlled by a handle that was swinging up and to the right. The shutter was pushed back. A cartridge was inserted into the window, which was pushed into the barrel by the shutter. Then the bolt lever was fixed, the barrel was locked, the hammer was cocked, and a capsule was put on the brand tube, and it was possible to shoot. The mechanism turned out to be quite efficient. With him, the rifle gave 5-5 rounds per minute, which was very good. But for 1866 it was already "old". Moreover, the GAU itself admitted that it was worse than the rifles of Dreise, Chasspo and Snyder, but ... nevertheless, it was she who was taken. Moreover, Dreise's rifle by this time was already 25 years old - I just want to say, but where did our intelligence look at then?

Terry-Norman rifle mechanism. Fedorov V.G. Atlas of drawings for "Armament of the Russian Army in the XIX century". 1911 year
And then at the beginning of 1865, after the events of the Danish-Prussian War, in which breech-loading rifles showed their effectiveness, the British Council for Artillery Armaments also began to study ways to modernize the British Enfield muzzle-loading muskets of the 1853 model with the replacement of breech-loading cartridges. Along with this temporary solution, it was decided to start the search for a breech-loading rifle, developed, so to speak, from scratch. Tested dozens of samples from all over the UK, Europe and the USA. One of them came from Johann von der Poppenburg, a Prussian engineer working in Birmingham. The Poppenburg rifle was tested along with 24 others at the initial stage of testing. She did not get to the final tests. However, it (model 1863) ended up in Russia, where it was tested together with the Spangenberg-Saurer rifle (patent of 1865) and the rifle of the English gunsmith Karle. Carle's rifle was taken, and both previous ones were rejected. But at least one of them should be told in more detail to show the level of competition in the tests.

Kalischer and Terry rifle, offered for the British fleet, sample of 1859. The lateral arrangement of the shutter control handle and the window for loading the cartridge is clearly visible. Royal Arsenal in Leeds, UK
Poppenburg patented his first needle valve design in February 1865 (No. 421), and in October followed an American patent (No. 50670). It was made in Birmingham at the enterprise of a certain Benson, with whom Poppenburg worked very closely.

The first sample of the Poppenburg rifle in 1865. Photo from the site Historical firearms
As in most needle rifles, the primer-igniter of the charge in the Poppenburg cartridge was located on the bottom of the bullet, where a socket was provided for it, so the needle in it was long. He patented his design of the cartridge on April 3, 1865 (No. 932), its validity expired after three years and became invalid in April 1868. But the mechanism of the rifle mechanism was quite original. The shutter on it flipped to the right, opening a window for the cartridge. Behind the breech was a retractable hollow breech chamber, inside which was a conical coil spring and a long needle. To make a shot, it was first necessary to push the bolt chamber out of the bolt, then fold the bolt, insert the cartridge, push it into the chamber, close the bolt, move the bolt chamber forward (while the spring with the needle was cocked), and only then press the trigger and shoot. The estimated cost of producing these rifles in the amount of more than 5000 pieces in England was 3 pounds sterling each. Due to the long needle and bolt action both in England and here in Russia rifles, according to the test report, seemed "too complicated and prone to accidents for military weapons." 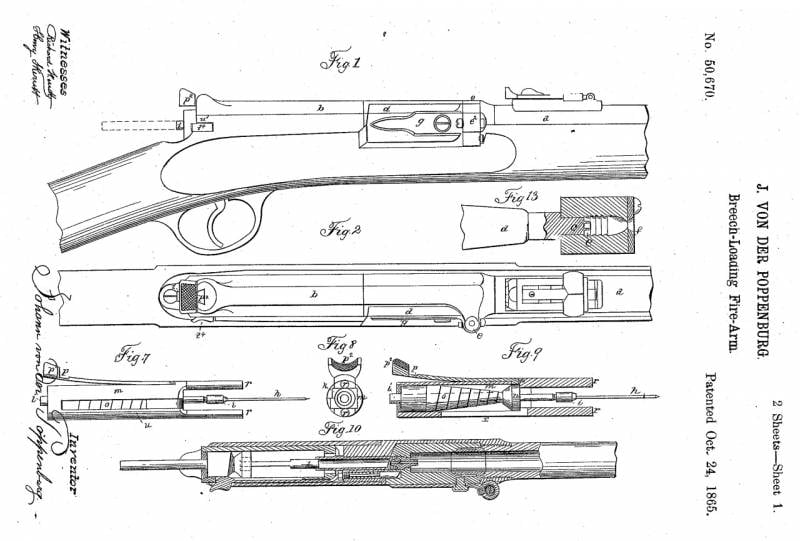 Poppenburg rifle according to patent No. 50670 1865 Appearance and bolt device 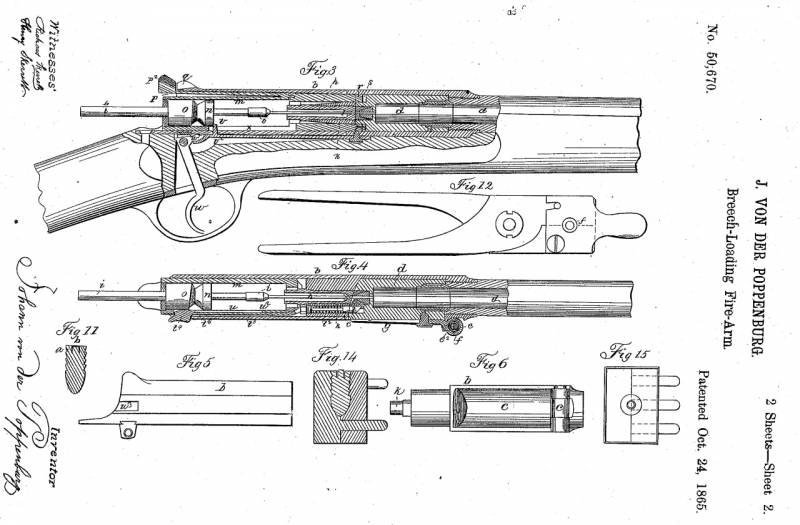 Poppenburg rifle under patent No. 50670 1865. Diagram of the mechanism and device of a bullet and a bullet
The October 1866 patent (no. 2580) appears to be the last Poppenburg patent. Subsequently, patents were issued to Poppenburg and Benson. This could have been due to the costs of filing and maintaining patents, which in the 1860s could have cost more than £ 45 over three years of protection. Today it is the equivalent of over £ 5 or almost $ 000. In the patent application dated December 7, 000 (No. 22), Benson is listed as a merchant and Poppenburg as a mechanical engineer. It is possible that Benson provided him with financial support, which was common practice at all times, and Poppenburg made him his co-author for this.

Rifle "Peppenburg-Benson" model 1866 under US patent No. 3382. Photo from the Armourers bench website 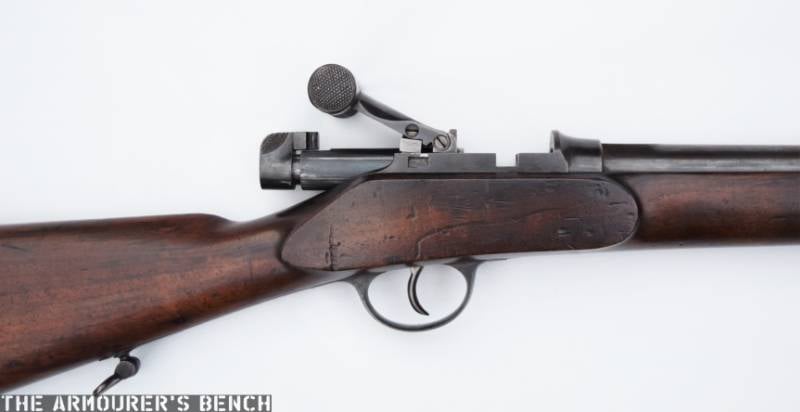 The third design of the Poppenburg slide, patented jointly with John Benson in December 1866 (patent No. 3382), already for cartridges with a metal sleeve, turned out to be the most perfect
Its breech part was opened by a “tubular breech”, which was moved back by a T-shaped articulated lever, which had to be lifted and pulled back. This movement also powered the rifle's T-shaped semi-circular extractor, which made it possible for the shooter to remove the sleeve. Then you could load a new cartridge and close the bolt, and the drummer behind him with his thumb was moved forward to cock it. The closed bolt is locked by a pair of rectangular tabs on the T-shaped lever that fit into two slots on the receiver. 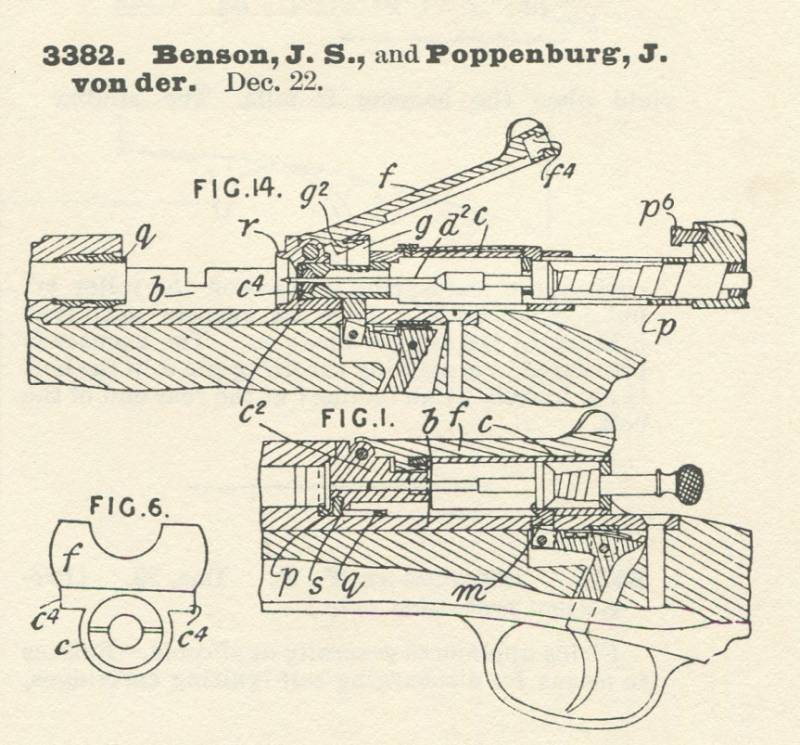 The action of the bolt action of the Poppenburg-Benson rifle. Photo from Armourers bench website
This option seems to be the simplest, very durable and quite perfect, but the rifle with this bolt was still rejected.

Extensive research by the British Army eventually led to the selection of the Jacob Snyder system, adopted in April 1866 for the 1853 rifle conversion, and the selection of the Friedrich von Martini bolt and Alexander Henry barrel, which, when combined into the Martini-Henry system, were previously adopted. into service in March 1871.

As for Russia, here they chose a Karle needle rifle, model 1867, chambered by Colonel Veltischev. The main difference from most cartridges for needle guns was that the capsule in it was located in a cardboard pallet, and not on the bottom of the bullet. Of course, Karle's system was simpler than Poppenburg's, although it had a more expensive and complex cartridge. The bolt in the bolt carrier was cocked by a handle vertically laid on it, which for this was only required to be raised to a vertical position, turned to the left, after which the bolt was already retracted, and the spiral spring together with the needle was cocked. Then, with the handle, the bolt moved forward and pushed the cartridge into the breech. The handle turned to the right and dropped down and back, after which it was already possible to shoot. To protect against the burst of gases back at the end of the bolt, an obturator of several leather circles was provided, which required attention and careful care.

Carle's rifle. Fedorov V.G. Atlas of drawings for "Armament of the Russian Army in the XIX century". 1911 year
Where savings have not been achieved is in the manufacture of cartridges. It turned out that their complexity is such that it is impossible to make them in the troops, even sending components there. Minier's bullet, for example, could have been cast by soldiers, but the iron cup was no longer in it.

Carle's rifle device. Fedorov V.G. Atlas of drawings for "Armament of the Russian Army in the XIX century". 1911 year
True, the gun was quick-firing and gave 10-13 rounds per minute (cartridges were taken from the table) when shooting 200 steps with aiming, and if the shooter took them from the pouch, then eight. This was in any case much higher than the rate of fire of the rifles of Gillet-Trummer, Terry-Norman and Green.

Rifle "Doerch-Baumgarten". At the time, many tried to replicate the success of Nicholas von Dreise and his rifle. So, in 1861, a needle rifle of a similar design, but an improved model, was created by Johannes Doerch and Kramer von Baumgarten. It had a shortened needle mechanism and a conveniently located reloading handle at the rear of the bolt. This rifle was in service with the army of the principality of Schaumburg-Lippe until its entry into the German Empire in 1871. Royal Arsenal in Leeds, UK
Alteration of rifles of the 1856 model according to the Carle system was carried out in Russia at many factories, but it went very slowly, since the price of 10 rubles per gun turned out to be unprofitable for the breeders. Nevertheless, about 215 of them were made. It also turned out that the shortcomings inherent in all needle rifles in the West were inherent in Karla's rifle, and therefore the question arose that it should be replaced, only now with a rifle under the unitary cartridge.

Ctrl Enter
Noticed oshЫbku Highlight text and press. Ctrl + Enter
We are
Green's rifle: the first among the Russian "breech-loading" ...Rifles by countries and continents. Part of 16. "And then push the cartridge with your finger ..."
Military Reviewin Yandex News
Military Reviewin Google News
29 comments
Information
Dear reader, to leave comments on the publication, you must sign in.