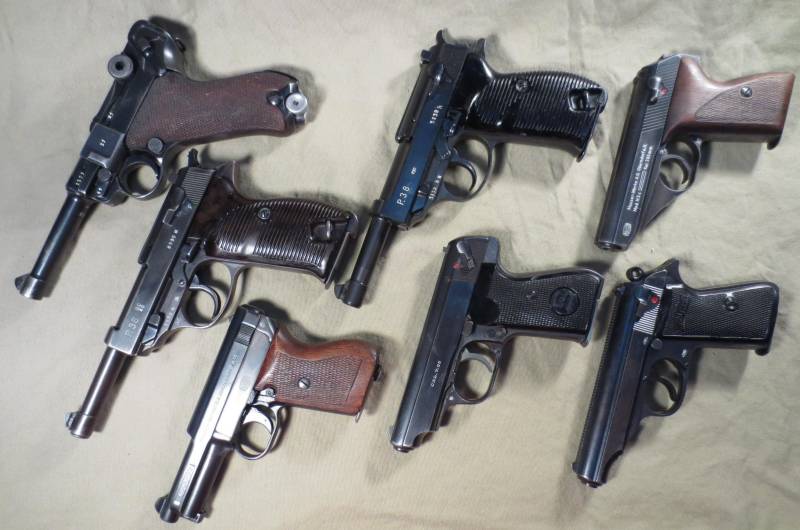 As a rule, such myths are generated by "historians" and other "experts" of the liberal persuasion, who are not fed with bread - let me tell everyone that in that war we won almost "accidentally" and "in spite of", "filled up with corpses", and so on and so forth. Having stumbled across the vast expanses of the Internet on the writings of another similar "clever man", I found, in particular, the following passage:

The "short barrels" that were in service with the Red Army were of such poor quality and had such low performance characteristics that German pistols became the most coveted trophies for the Red Army men of all ranks and ranks.
According to the deep conviction of the author of the quoted text, “the superiority of the same Parabellum as a personal weapons over our TT was absolute ", and it was this" fact "that became the reason that our commanders and soldiers massively picked up the" perfect creations of German gunsmiths "on the battlefields. What is true in this statement? Just a mention of the fact that in the active army (by the way, not only there), many Walters, Parabellums and Mauser, who had military trophies as their origin, went "from hand to hand". Everything else is an absolute lie.

I will not even try to argue with the thesis about the demand for German pistols in the Red Army - it is evidenced by many front-line photographs in which our valiant soldiers are captured precisely with well-recognized short-barreled samples of the German military industry. However, the reasons for this phenomenon were completely different than the low quality of Soviet weapons! Which ones? Now I will name them, reducing them to three main ones.

First of all, the fact was that according to the Charters and all other regulatory documents, private short-barreled weapons (and most junior commanders of the sergeant level) in the Red Army were not supposed to have personal short-barreled weapons at all! If you are not a driver tank, the commander of a machine gun or mortar crew, then here's a Mosin rifle or, if you're lucky, a submachine gun - and into battle. There were a few more exceptions, but only confirming the general rule: a pistol or revolver is a weapon of command personnel.

As a confirmation, I can cite an excerpt from the staffing list of one of the rifle regiments (from 1942), where for 165 command personnel and 59 command personnel with more than 670 junior command personnel and 2270 ordinary pistols and revolvers, 224 were supposed - that is, clearly according to the number " commanders and chiefs ". This is just a document, and not someone's idle inventions. But short-barreled weapons in war are needed, as practice shows, for everyone! Especially its importance increases during street battles, fights in a confined space, where you can't really turn around with a rifle - in houses, on stairs, and in the same trench, by the way, too.

In hand-to-hand combat, a pistol traditionally plays the role of a "last-chance weapon", the presence or absence of which affects the life of a fighter. Imagine for a second that a hefty, one hundred kilograms, Fritz kid fell on you, his weight firmly clamped your "three-ruler" and trying on how to stick a sharp knife or bayonet into your throat. Why, he will strangle him with his hands, a fat fascist! In such a situation, one salvation is a pistol stored in your pocket or in your bosom. This is not to mention the fact that standard weapons may fail, break, or run out of ammunition. A "fallback" is simply irreplaceable here.

It is clear that a soldier or a sergeant could only get hold of such a useful little thing in battle. Moreover, no one would try to pick up the weapons left over by their own commanders, except perhaps a suicide. Prove then to the special officers ... And the immediate superior, seeing the "ownerless" TT on the soldier's side, would not stroke the head - except perhaps. But the German pistols that were not handed over as they should be looked at much easier: if he took it in battle, he had the right. Yes, and the "fathers-commanders" themselves, as a rule, preferred, in addition to TT or Nagan, to have somewhere in the pocket of breeches, tiny in comparison with them officer Walter RRK or Mauser. Just in case.

The second reason is purely moral. The presence of a trophy enemy weapon in a person testified to his valor, daring, in the end, shelling no less weighty and visible than a medal or order, which, especially at the beginning of the war, only a few could boast. Not that they did not deserve it - they were rarely awarded then. Yes, some photographs from the family archives, in which yesterday's boys parabellum parabellum or Waltera, clearly showing off, cause a smile. Just don't forget how they got these things. And at the same time, the fact that these boys who survived in 1945 smashed the "millennial Reich" into small smithereens.

Well, the third reason is purely mercantile and down-to-earth. War has its own laws - both written and unwritten. Relationships arise between people that do not fully fit into the framework of the charter. And the war also has its own "currency": smoke, alcohol, food not from the "common pot". And the weapon, of course, is such that it could become an enviable gift with which you can "resolve the issue" with some staff officer. After all, he also has a trophy for hunting, but where can he get it? And you, for example, need to transfer to another part or urgently go on vacation, or even bother for one of your comrades in arms in some matter. Why not respect the right person? In the end, a trophy pistol could simply be exchanged for something useful or tasty.

By the way, trophy German pistols were considered a particularly valuable "souvenir" among one very specific category of pilots. Specifically - from the pilots who delivered cargo for the front line to our glorious partisans. After all, it seems that a person does the most necessary thing - without the help of the "Big Land", the people's avengers can not. And still not a fighter, not a bomber. So, some kind of "truck" ... I got this detail from the memoirs of some partisan commanders - pilots with the coveted trophies they wholeheartedly presented. And what? Good people are happy, but they themselves have such good - in bulk.

These are, in fact, all the real, not far-fetched reasons for the popularity of German pistols among the soldiers and commanders of the Red Army during the Great Patriotic War. No one thought to replace them with powerful, reliable, long-range service TTs and Nagans. They played the role of nothing more than an additional, spare weapon, or even a front-line "currency". We have defeated the enemy with our Soviet weapons - and there is nothing to write about!