"And liquidate as a class!" 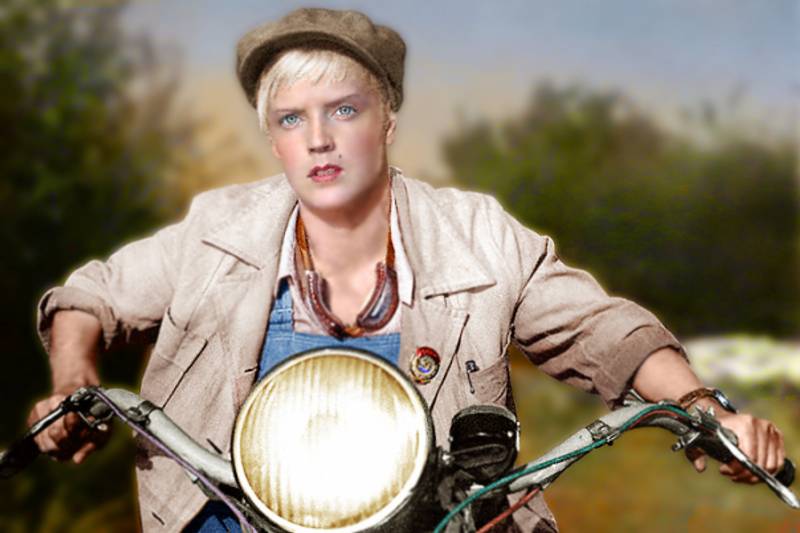 Marina Ladynina is an order-bearer, a tractor driver, a collective farmer, but in reality she is a star of the Soviet cinema screen of the 30s ... A still from the 1939 movie "Tractor Drivers"

The storms of revolutionary bosoms have calmed down.
The Soviet mishmash was covered with mud.
And got out
from behind the RSFSR
mug
tradesman.
From all the immense Russian fields,
from the first day of Soviet birth
they flocked,
hastily changed feathers,
and sat down in all institutions.
(V. Mayakovsky. About rubbish)
The beginning and end of the peasant civilization. Today is the fifth article on the topic of the end of the peasant civilization. I really hope that after reading the previous article, those of you, dear readers of VO, who would like to comment on this material today, found the strength and time to read the report of I. V. Stalin (I. V. Stalin's speech at the conference of agrarian Marxists " On the issues of agrarian policy in the USSR ”, December 27, 1929), because there the role of the Soviet kulaks of the 20s and the reason why it was impossible to touch him at that time is very well explained. But since 1929, the situation both in the country and in the world has changed dramatically. A crisis broke out in the United States, many farmers went bankrupt, and grain production fell sharply. A real possibility of exchanging "grain for factories" appeared, which undoubtedly put an end to the "kulaks" as a social stratum in the Soviet countryside. And this despite the fact that the kulaks of the pre-revolutionary and Soviet kulaks of the 20s were very different. The pre-revolutionary ones are usurers. The Soviets are hard workers, but they make use of the hired labor of the poor. But they were also closer to capitalism, so in a socialist country it was impossible to put up with it further.

A situation arose that was somewhat very similar to that which took place in England during the era of fencing. It needed cloth, and traditional peasant tenants stood in his way. And they were destroyed! Our traditional peasant small-scale commodity system stood in the way of the country's industrialization. And also had to be destroyed. The new machine civilization did not require a peasant to own the land. She didn't even need a user (as in the USSR)! What was needed was a hired worker on the land, who did not reason about what to sow - grain or potatoes, but would do what was ordered for a salary.

And everything began, as in England, only adjusted for the era. Although the methods were not very different. Then they were beaten, branded and hanged. In our country, famine came to the aid of the state, with which no one particularly fought in the early 30s, then the repressions of 1934-1941. If someone thinks that they suffered mainly from the military, the Chekists themselves, "old party members", "sabotage engineers", "poisoning doctors", "fascist spies" and others with them, he is cruelly mistaken. In the RGVA they calculated: 60% of the repressed are peasants who were exiled to the GULAG as a cheap slave force. So, my scientific advisor, Professor Medvedev, who worked in Moldova, back in Soviet times, proved with documents in his hands that after its annexation to the USSR, 10 householders were repressed there after its annexation to the USSR, and in reality there were many more, but just no documents were found. That is, a frank act of arbitrariness was committed against these people. It is difficult to explain from the point of view of the slogans proclaimed in the USSR, but quite understandable from the economic point of view. The peasantry, which had become a brake on the country's economy, was annihilated with any "trump cards", just to eliminate it.

And now let's turn to a very interesting book by N. Voznesensky, Chairman of the USSR State Planning Committee. And let's start not with the text, but with a photocopy of its corner. "Withdrawn" - it says there, and only then my mother somehow managed to get it ... 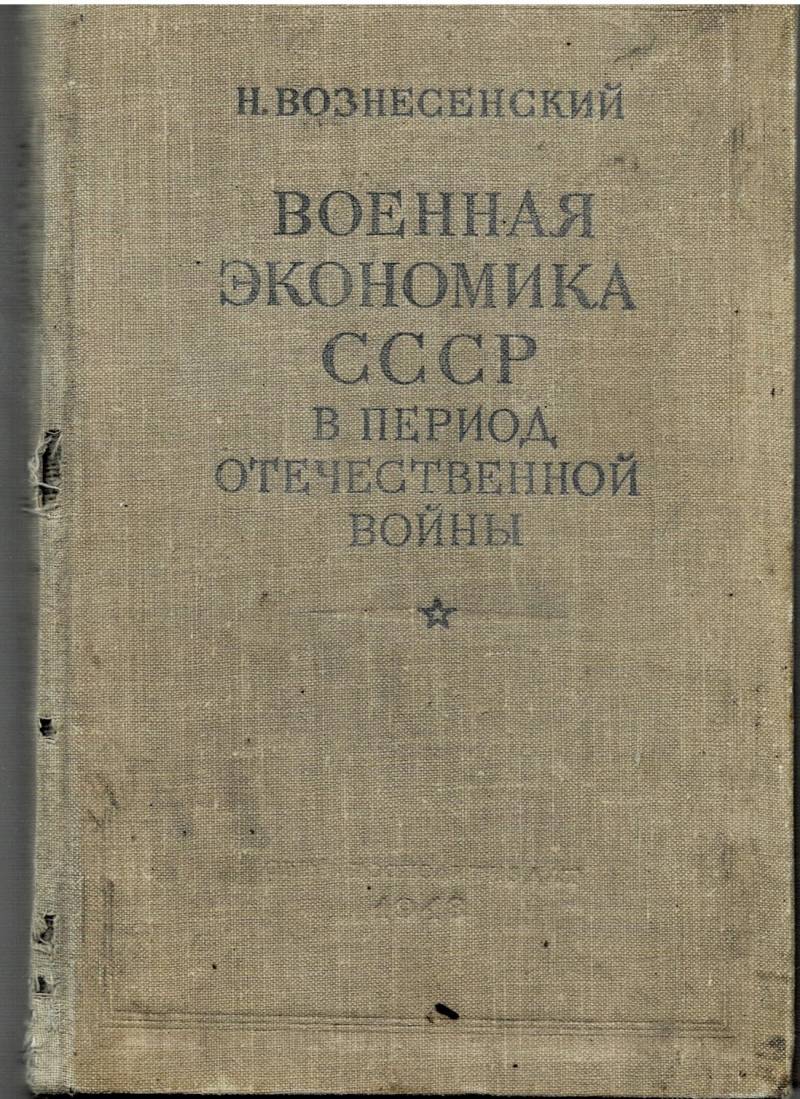 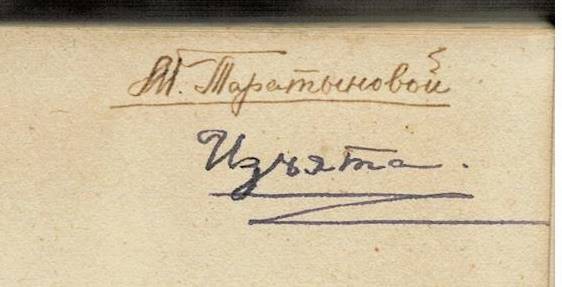 This corner ...
And in it there are numbers, many numbers showing why we defeated Germany, and the numbers are compared with percentages, sometimes with numbers, so it is impossible to find out anything exactly from it. But ... you can still use some data from it. And here we read:

It's about the growth of workers and employees
And now the modern data available to everyone today: the first five-year plan (1928-1932) was associated with an incredible pace of urbanization. The urban workforce increased by 12,5 million, of which 8,5 million were rural migrants. Nevertheless, the USSR reached a share of 50% of the urban population only in the early 1960s. And ... again let us recall Lenin and his words from the past material: "A giant petty-bourgeois wave has risen ..." Well, after all, it did not dissipate anywhere after the revolution and the Civil War, and the mass of peasants in the cities remained! When did Mayakovsky write his poems "On Trash"? In 1920-1921. Here it is ... And now we will continue our epigraph:

“The threads of the philistine revolution have entangled them.
Philistine life is more terrible than Wrangel.
Rather
roll canary heads -
so communism
was not beaten by canaries! "

We go further according to the book of N. Voznesensky ...
You should think about this paragraph carefully ... Look how much the sown area and gross grain production have increased in 22 years. For 37 million hectares and 3 billion poods. And now what is not in these lines, but what was in reality. Before collectivization, up to a THREE of the cultivated land lay ... in the borderlands and was excluded from the crop rotation. And now this third has been plowed with tractors! But at the same time, grain production has grown very insignificantly, not several times, and only on the basis of the extensive growth of collective farm plowing! Which clearly indicates that the collective farmers were not interested in working "for their uncle" and even worked on tractors carelessly. However, here I have already published a number of articles with materials from the Pravda newspaper about how badly the equipment on the collective farms was monitored and how badly it was repaired. And although there were shock tractor drivers, the bulk of the peasants did not work well! 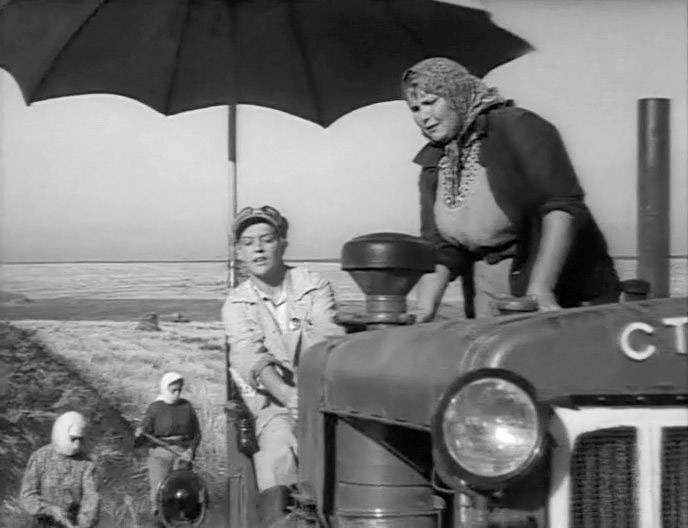 The female tractor drivers in the cinema worked well! Shot from the movie "Tractor Drivers"
And here are the data on the population of the USSR in 1940: 195 people. And how much grain was harvested is known. Well, who's good at math? Let's divide and find out how much grain was produced per capita. I got 392 pounds. And now let's compare: in 000, 37 poods of grain per capita were harvested in Russia. In the USA - 1913 poods, in Argentina - 30,3 poods, in Canada - 64,3 poods. Thus, in terms of grain harvest per capita, the United States was two times ahead of Tsarist Russia, Argentina - three times, and Canada - four times. Well, in the USSR, at the cost of colossal costs, tears and blood (and the fact that it was pouring, we can even learn from Sholokhov's Virgin Soil Upturned, and his letters to Stalin are a very interesting source [87,4]), the yield became only slightly higher, than it was in tsarist times!

Was there a work front where they worked well? Yes, I was! And again we look at the book of N. Voznesensky ...

Livestock indicators. It seems to be growth, isn't it?
However, not all of these figures comrade. Voznesensky said. He did not give the figures that Comrade. Stalin named it at the XVII Congress of the CPSU (b). And he gave the following data in his reporting report: horses (1929 - 34,0 million heads) - in 1933 - 16,6 million; cattle (1929 - 68,1 million heads) - in 1933 - 38,6 million; sheep and goats (1929 - 147,2 million heads) - in 1933 50,6 million; pigs (1929 - 20,9 million heads) - in 1933 - 12,2 million. That is, so many people cut cattle into collectivization that the grave consequences of mass slaughter were felt three years later. Yes, according to the book of Voznesensky, the number of livestock in collective farms was growing, but "my beast" was also bred in peasant farmsteads, where its massive growth was also observed. But for some reason he did not give these figures. Do you know why? So that it would not be seen that on collective farms, animal husbandry, like grain growing, developed "anyhow". But on the other hand, the peasants worked conscientiously on their personal subsidiary plots. They could not grow grain, but they raised cattle both for themselves and for sale for meat in the city! And there the pace was not much higher than the collective farm. That is, they cut it themselves, then by 1940 they raised it! 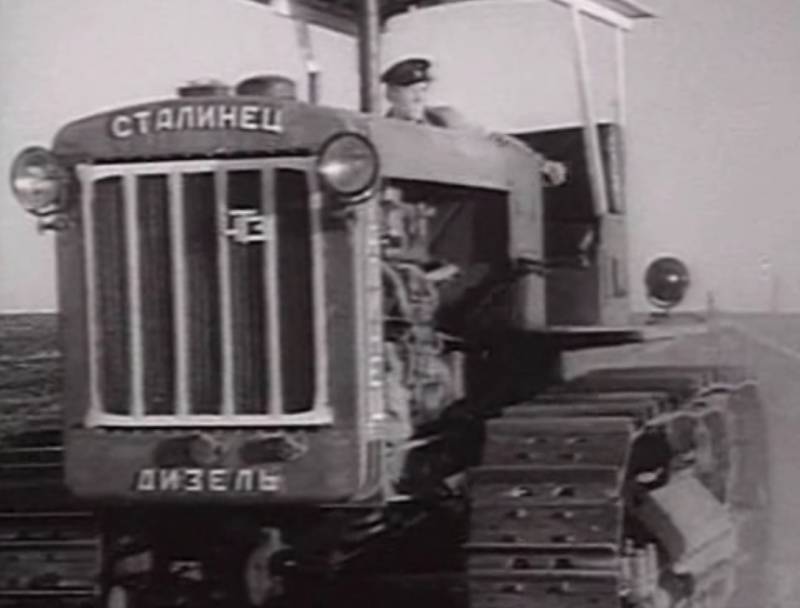 S-65 "Stalinets" (diesel) - the striking force of the revolution in the countryside. Shot from the movie "Tractor Drivers"
That is, the goal of turning the peasants of Russia into hired agricultural workers in the 30s was generally achieved. In England, their number was reduced through "bloody laws", in our country through hunger, "freezing" (see Sholokhov's letters to Stalin) and the GULAG. The mass of peasants from the "immense Russian fields" migrated to the cities, where they brought their peasant morality, petty-bourgeois psychology and traditions of patriarchal culture. There was a petty-bourgeois village - the city became petty-bourgeois. The level of the urban subculture has dropped sharply. And for some reason no one really thought about the consequences of these. They introduced universal primary education in 1930 and ... everything is fine. As a result, before the war, there were only 1000 people per 77 people with a secondary and seven-year education. And six (six in total!) People with the highest. In the Red Army, personnel hunger reverberated in 1941-1942. - on January 1, 1941, only 7% of the commanding staff of the army and fleet had a higher military education, and only half had a secondary education. But education is not everything. It is important to understand that for the development of a certain consciousness and culture, the life of three generations is required, that is, from 60-75 to 90 years (it depends on which of the generational theories you count!), But only “at the top” we have for some reason no one and did not even think ... Although the same Stalin in his reports at the congresses and said, while referring to Lenin, that it takes a lot of time to develop a proletarian consciousness. But I didn't really focus on this topic. Apparently, he believed that gradually we will develop it on its own ... Step by step! 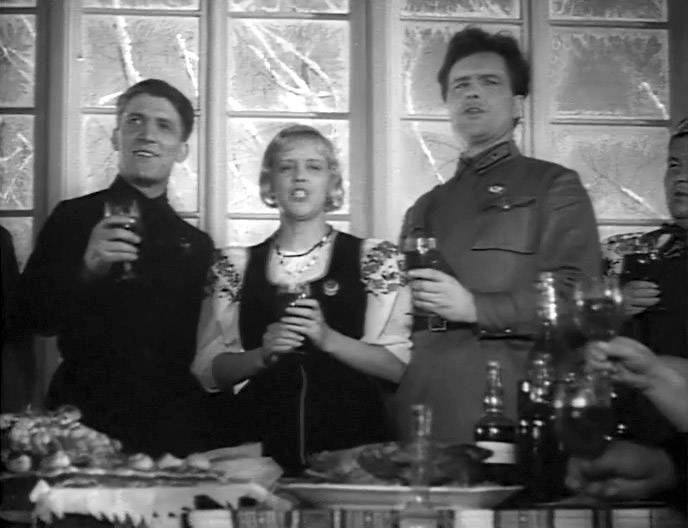 And the film "Tractor Drivers" ended, of course, with a wedding, at which everyone sang in unison: "Thundering fire, sparkling with the brilliance of steel, the machines will go on a furious campaign, when Comrade Stalin sends us into battle, and the First Marshal will lead us into battle!" (Music by the Pokrass brothers, lyrics by Boris Laskin) 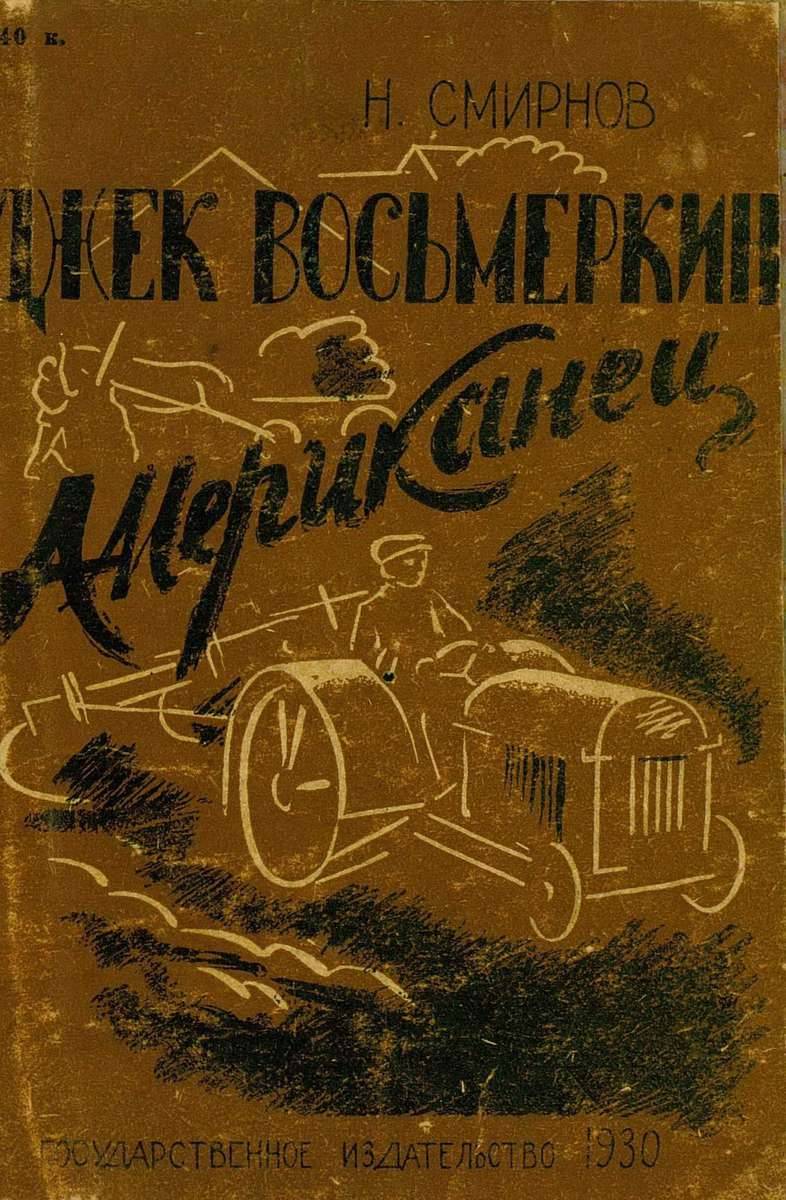 To be continued ...
Ctrl Enter
Noticed oshЫbku Highlight text and press. Ctrl + Enter
We are
Chernobyl notebook. Part of 3Pol Pot. The Khmer Route. Part of 2. Victory in the Civil War
Military Reviewin Yandex News
Military Reviewin Google News
583 comments
Information
Dear reader, to leave comments on the publication, you must to register.