The first aircraft carriers: how, where and when it was 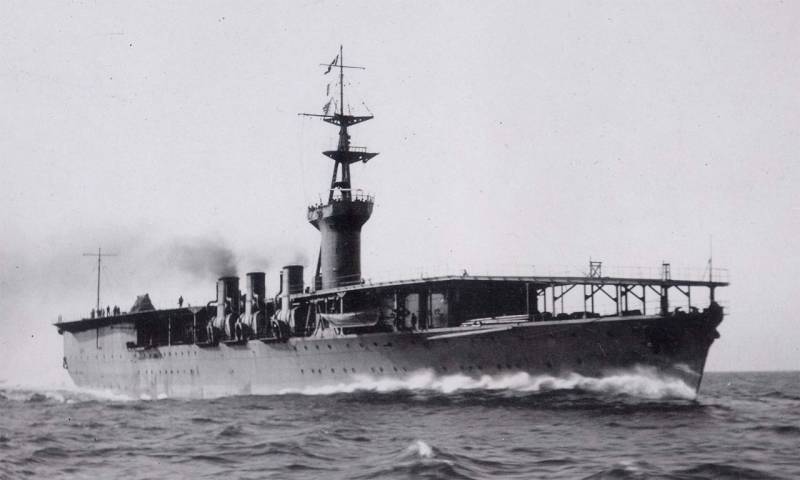 Some historians are inclined to consider the first experience of joint use of air and sea vessels carried out in 1904 by raising a balloon over the Russian battleship Sinop. Prior to that, sailors flatly refused from flying objects in terms of their use together with ships - they can at least get confused in gear.

On the first aircraft carriers: how, where and when it was.

As a matter of fact, the first ships carrying aircraft that were quite suitable for performing combat missions were, in fact, combat units converted for this need, which initially had a completely different purpose. The French "Foudre" or the British "Hermes" were built and operated first as a mobile base for torpedo boats, and the second as a cruiser. And, by the way, even after "re-profiling" and a fair amount of re-equipment, they did not become aircraft carriers in our usual sense. They were even called differently - "aircrafts".

The thing is that these ships were used as floating hangars for seaplanes - that is, machines that, having floats instead of a landing gear, took off from the water surface and landed on it. Raised by cranes to the deck, the seaplanes were simply placed in hangars located on board the ship and could not take off without the help of the same crane operators. As a rule, these were torpedo bombers intended for strikes against naval targets, or reconnaissance aircraft.

By the time of the collision of world powers in the First World War, or in its process, almost all the participants in the conflict had acquired such ships - it is worth mentioning the British "Engadine" and "Ben-my-Chree" "Ark-Royal", the German "Answald" and "Santa Elena" ", As well as the Russian ship" Orlitsa ". Perhaps the Italians did not bother with this issue. Nevertheless, all these were not aircraft carriers in the usual sense of the word, but, in fact, air transport ships.

At the same time, the first air attack against a "land" target using sea-based aircraft was carried out - seven aircraft that took off from a British ship successfully attacked a German airbase. Thus, a new direction of action was opened for aircraft carriers.

The combat use of seaplanes in real theaters of military operations from 1914 to 1918 has shown very convincingly that vehicles with a wheeled chassis have a huge advantage over their "waterfowl" counterparts. Deprived of bulky floats, they were more maneuverable and faster. In the end, they were suitable for performing combat missions not only at sea, but also on land. Everything went to the fact that the winged machine had to "learn" to land on the ship's deck and take off from it.

Tellingly, experiments of this kind were conducted by that time for a long time, primarily in the United States and Great Britain. I must say, they passed with varying success - a strong pitching was enough, and the flight, or rather an attempt to complete it on board the ship, ended in tragedy. Nevertheless, the stubborn enthusiastic pilots did not give up, and the world saw the first "classic" aircraft carrier "- the British" Argus "(HMS Argus). It was a ship that had no superstructures and its only deck was, in fact, a runway for two dozen airplanes.

After World War I

In 1920, aircraft carriers take on their final, "classic" appearance - an "island" type superstructure appears on them - on the starboard side. This arrangement is due to the fact that, according to observations, the pilot who failed to land the plane on the deck in 9 cases out of 10 turns it certainly to the left. But there were aircraft carriers with a superstructure on the other side.

From about the same time - the end of the 20s - the beginning of the 30s of the twentieth century - aircraft carriers finally stand out as an independent class of warships. The first ships designed specifically as aircraft carriers were the British Hermes and the Japanese Hosho (Hosho). No matter how many "floating airfields" had plowed the sea before, they were all converted for new needs by tankers, bulk carriers, cruisers or battleships. There were even cruise ships in this “family”.

After the end of World War II, the era of American aircraft carriers began. And in 1991, it seemed, came the time of their absolutely undivided domination at all latitudes. However, according to many military experts, it has already ended - with the emergence of new means of destruction of sea targets.