Zamvolt vs. Peter the Great: Who Has More Chances to Survive?

January 6 2021
70
Overrated. Here's how it is - over-praised. In a couple of previous materials, I spoke so flattering about the work of Kyle Mizokami that now I am sitting here, and I cannot understand. Kyle, buddy, how could that be?

"In connection with the deteriorating relations between Russia and the West, the issue of confrontation between large surface ships has become urgent again."

Okay, so in general we can agree before the Third World War. That it will begin somewhere in the Pacific Ocean with a skirmish ... No, but in fact, this can happen. 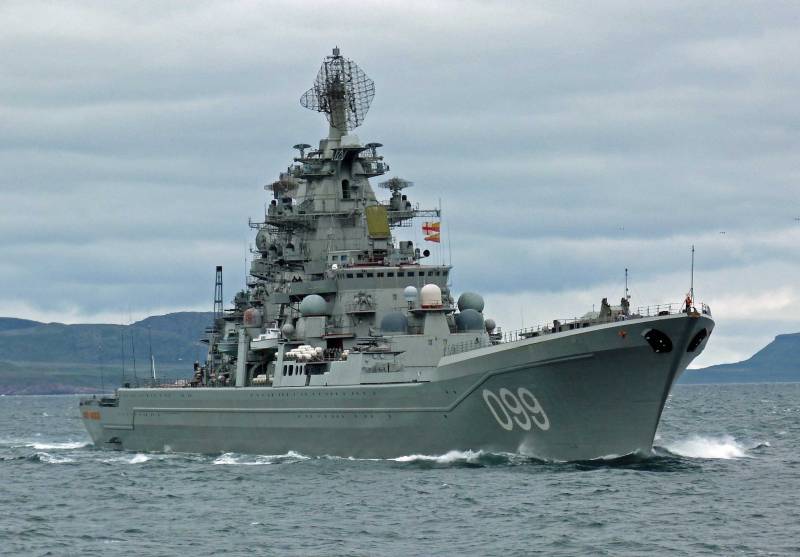 In general, with regards to the Third World War in general and the beginning of it at sea in particular, I can tell you the following: it seems to me that the Third World War will most likely begin after the ships of Mongolia or Uzbekistan begin to sink the ships of Moldova or Belarus. I somehow do not observe any more weighty prerequisites for unleashing total annihilation.

By the way, who already has a good laugh? Nearly 500 ships roam around the world under the Moldovan flag ... So there is no need to giggle. Laugh at Belarusian shrimp if you want to.

Well, or Mizokami predicts for us the meeting of large ships of Russia and the West somewhere in a dark corner of the World Ocean in order to arrange some kind of local disgrace with far-reaching consequences.

In general, the picture that Mizokami paints is quite futuristic like that. Somewhere over the horizon, "Zamvolt" and ... "Peter the Great" met face to face. 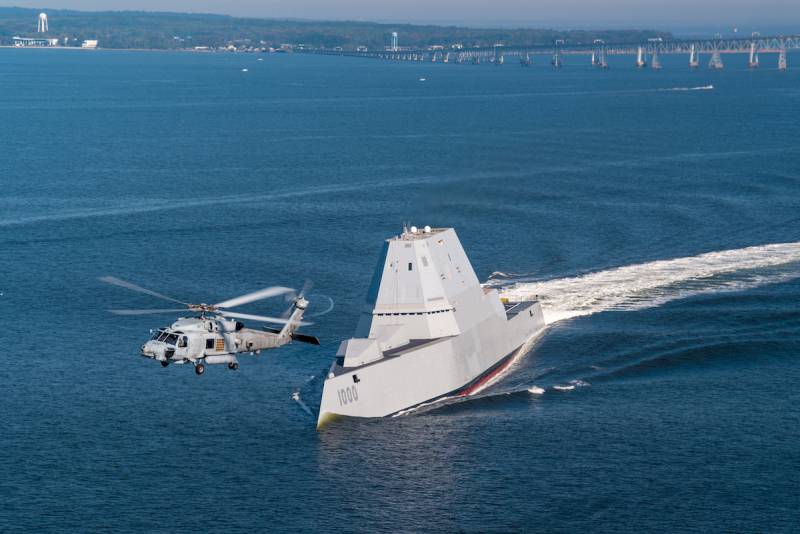 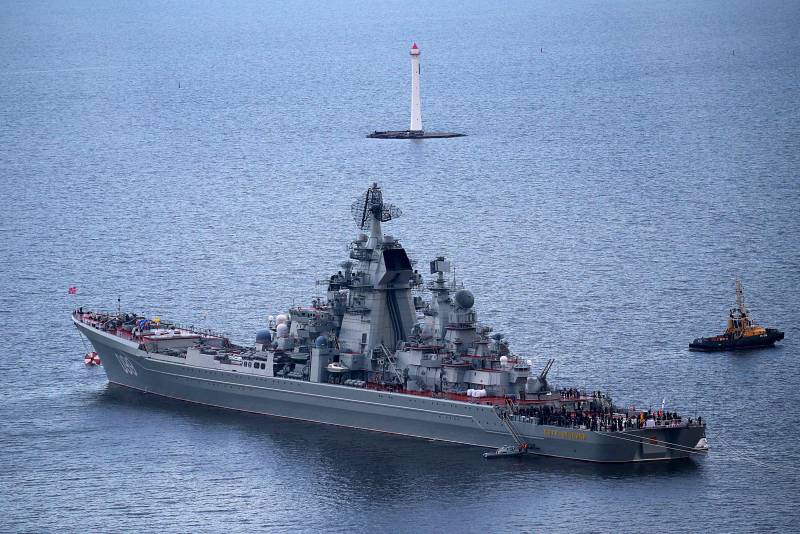 Moreover, Mizokami himself writes that Zamvolt is a missile destroyer to support ground operations. That he had forgotten in one peakless cap in a remote area of ​​the ocean, where "Peter the Great" staggers like a lonely elephant is a question, as it were.

"What will happen if these two ships meet in battle one on one?"

You know, it's like hand-to-hand combat with a paratrooper from the Airborne Forces. I mean, you have to lose a machine gun, a shovel, a knife and find a second equally gifted one. And to meet the lonely "Zamvolt" with the no less lonely "Peter the Great".

In general, I fundamentally disagree with the Mizoks, and if we compare the Zamvolt, then with a ship of a similar class, and not with a heavy cruiser.

Yes, the Zamvolt is the newest class of ships in the United States, truly stealthy ships with quite impressive firepower. Plus the latest electronic equipment. 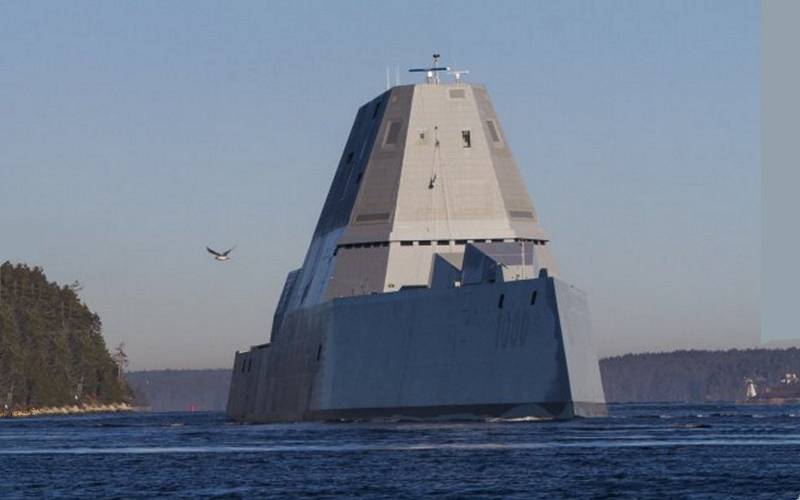 In general, "stealth" today is a very conditional thing. It is applicable, shall we say, in the face of opposition from an adversary who does not have modern means of tracking. And when a group of satellites hangs in orbit, AWACS planes fly over the sea, and enemy ships have their own "eyes" in the form of helicopters - all this is very conditional.

Since we are talking about the visibility of "Peter the Great" and "Zamvolt", I think there will be parity. The Americans claim that the signatures of the Zamvolt are comparable to a fishing seiner of 3-4 thousand tons, but the presence of reconnaissance helicopters from the Peter the Great and the Legend orbital reconnaissance system makes it possible to question the secrecy of the Zamvolt.

We are not talking about the stealth of "Peter the Great" at all, of course. It is clear that 25 tons of a cruiser and 000 tons of a destroyer are slightly different things.

The armament of the ships is also completely different. And let's put it this way, from a destroyer, even one as thick as Zamvolt, it is difficult to expect such capabilities as a cruiser has. 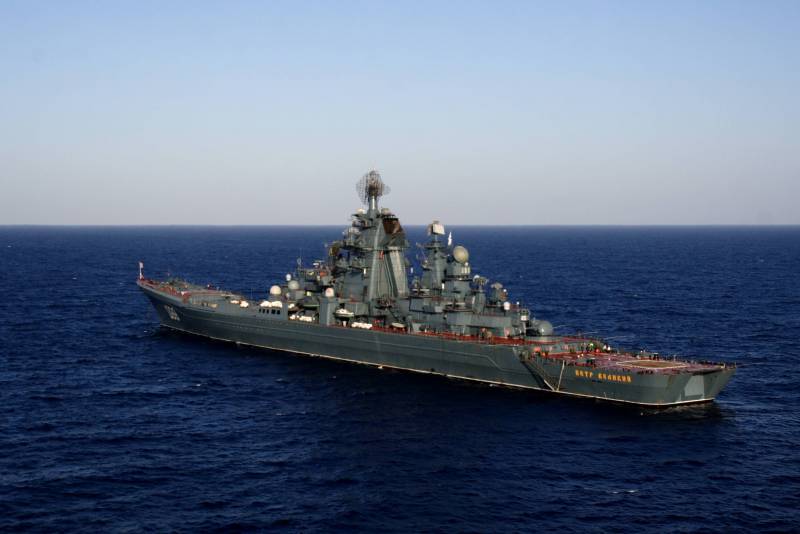 In general, a complete set.

And if you really want to use the Zamvolt as an air defense ship, you can load 4 Sea Sparrow missiles of shorter range into each cell, and then the ammunition load will be "only" 320 missiles. That is, if something happens, Zamvolt has something to fend off enemy missiles. Plus two 30mm cannons. The destroyer seems to be able to protect itself. 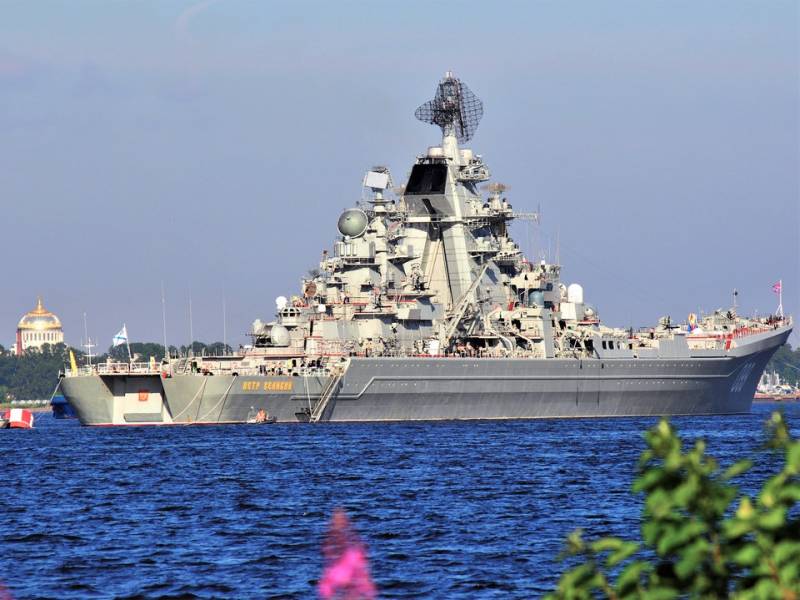 With regard to the air defense of the cruiser, then everything is more interesting. SAM "Fort-M" (aka S-300FM) with 12 launchers and 96 missiles. The S-300 is more than enough for both a modern aircraft and a Tomahawk.

At an average distance, "Peter the Great" has 16 "Dagger" launchers and 128 missiles. And at the closest distance - 6 Kortika launchers, 144 missiles and two more 30-mm six-barreled anti-aircraft guns AO-18K.

In general, it is much more serious than that of a destroyer. Yes, we can say that the RIM-162 ESSM is newer than the Daggers, but who tested it in battle?

And now a few words about how these ships could pick each other.

Everything is sad at "Zamvolt". Anti-ship agents are the weak link. "Harpoons" will not fit into the mines, they can be placed, but on the deck, in special PU. The Tomahawk, you know, is a so-so anti-ship missile for many reasons. But the main thing is that modern air defense systems can make a chop out of an "Ax" flying at a speed of 800 km / h.

"Peter the Great" prepared 20 "Granit" anti-ship missiles for "Zamvolt". Seven-ton monsters flying at a speed of 1,5 to 2,5M and each of them is capable of opening such a hole in the destroyer's hull that it is even unpleasant to imagine.

Can SM-2 stop the Granites? Well, in theory, yes. And how in practice - who checked again? On the other hand, if at least one such monster sneaks through the destroyer's defenses, it will not seem a little to him. 700 kg in a warhead is 700 kg of explosives. A modern ship, in which, unlike colleagues from the Second World War, there is simply no armor, it will deploy such a rocket like a rose.

Mizokami talks about artillery. Well, yes, there are guns on both ships. On Zamvolta it even looks more impressive, because two 155-mm guns with a rate of fire of up to 10 rounds per minute are quite.

However, the weapons are completely different. American - the newest, from which they shoot exclusively special LRLAP shells "weighing" $ 800 apiece at a distance of 000 km. The Russian gun is more modest, and works at a range of up to 81 km. But the combat rate of fire for two barrels is 23 rounds per minute. Against 90 American guns - it looks weighty.

But today it is not even worth considering artillery as a means of fighting ships. Not seriously. A 155-mm projectile that flies according to GPS and hits very accurately is, of course, beautiful. But how many such shells will have to be driven into the "Peter" to make the cruiser unpleasant?

Considering that "Granite" starts from a distance of almost 500 km ... 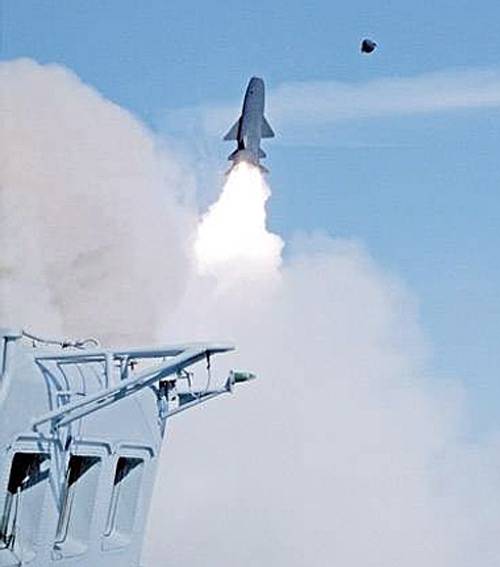 In general, the artillery of "Zamvolta" was initially focused on suppressing targets on the coast. Fighting with such guns against a cruiser is, well, perhaps as a gesture of despair, nothing more. To inflict damage, the shells, of course, will do, this is indisputable. But Granite alone will turn the destroyer into a trough of bloody mince, and there's nothing to be done about it.

Considering that "Granites" can be guided not only with the help of their "brains", but also with the use of ship helicopters, patrolmen Tu-142 and even Tu-95RTs. And there is also "Liana", a system designed specifically for the guidance of such gifts with the help of satellites "Lotos-S".

So, what can happen if these two ships meet on a "narrow path" 400 kilometers long?

Here Mizokami gives out just a masterpiece of thought, and it gave me great pleasure to model this chain of events in my brain.

“Both ships are intensely looking for each other, and helicopters help them with this from the air. In such a situation, the American stealth destroyer has a clear advantage over the majestic, but not stealthy Russian cruiser. The Zamvolta's helicopters will be the first to detect Peter the Great and transmit its exact coordinates to their ship. "Peter the Great" will detect the helicopters, but will not be able to quickly determine the exact coordinates of the destroyer. "

Come on, of course, our destroyers will be found. Moreover, there is no sense in the fact that "Zamvolt" will be the first to spot "Peter", there is no profit from this. There is nothing special to shoot with anyway.

“In theory, the stealth of an American destroyer could allow it to approach a Russian cruiser within the range of its guns. On the other hand, the Russian cruiser will want to stay as far away from the American as possible and strike from a long distance. "
Well, so-so alignment. Approach the distance that Peter's missiles will cover in a matter of minutes and try to pick it open with artillery ... It's funny. It is just as frivolous as relying on the small signatures of the destroyer and that it will not be found from Peter the Great.

“If the Granit missiles manage to detect the Zamwalt, the American destroyer has air defense equipment to deal with them. With at least 18 SM-2 medium-range missiles and several dozen modified Sea Sparrow short-range missiles, the destroyer is likely to be able to shoot down most of the Granite missiles. 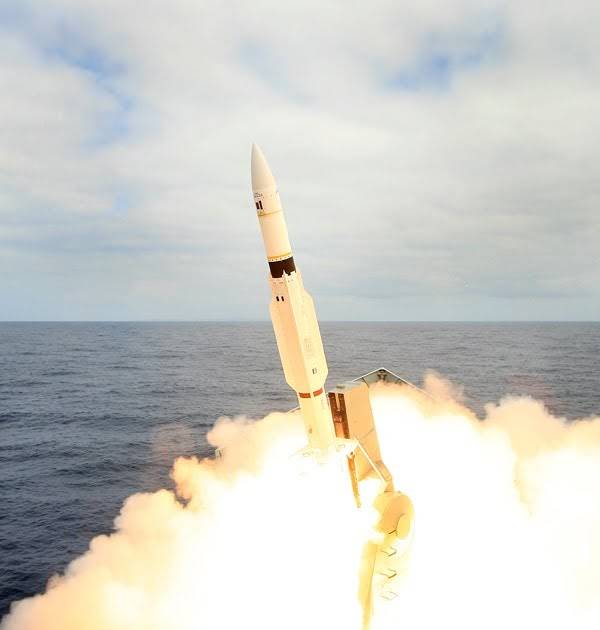 That's well said. The Zamvolt will probably be able to shoot down most of the Granites. Quite rightly so. Another question is, what will the missiles that cannot be shot down do to the destroyer?

Trust in guns? Well, after all, this is not the 20th century, and it is hardly worth expecting such effectiveness from shells, compared to missiles.

“The result of this scenario is a draw. Neither ship will be able to accurately aim at the enemy. In the future, new weapons, such as long-range anti-ship missiles, will provide Zamvolt with a significant advantage. In addition, 155-mm projectiles that can be aimed at a target from an unmanned vehicle will also be useful. "

Here I fundamentally disagree with Mizokami. There will be no draws. Kyle himself admits that the destroyer's air defense may not reflect all the attacks of the Russian cruiser. This means that in the event of a military clash, "Zamvolt" will definitely run into Russian "Granites". And here, forgive me, how the cards will fall.

The fact that Mizokami so relies on the long-range guns of the destroyer and the fact that Peter the Great's radars will not be able to detect the Zamvolt, that it seems frivolous. They can. And detect, and provide guidance to him. Still, a ship of 14 tons is a rather large structure, and all these invisibility effects are often very arbitrary.

And if we also take into account the fact that the speed of the "Peter" is higher than that of the "Zamvolt", and in general it turns out that the destroyer cannot catch up or escape.

So even taking into account that "Peter the Great" is very outdated in some places, nevertheless, its narrow specialization as a raider-killer leaves no chance for "Zamvolt". 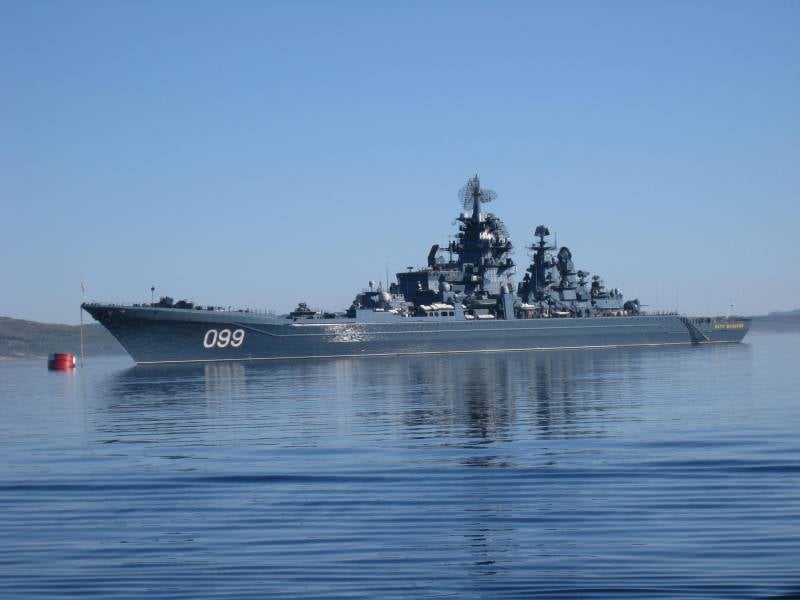 But the main oddity in Mizokami's plot is why exactly a destroyer against a cruiser? I wanted to flatter my ship, they say, is it so inconspicuous that it will not be found? They will find him, he will not go anywhere.

But I would compare with classmates. It's more honest, and if you really want to show how cool Zamvolt is, you can compare it with something else. And so - even the oldish "Orlan" can easily peck this destroyer. Considering the complete absence of anti-ship weapons at Zamvolt, this will be easy.

So Kyle Mizokami went a little too far in comparison, relying on invisibility.

Ctrl Enter
Noticed oshЫbku Highlight text and press. Ctrl + Enter
We are
Why did the battleships really disappear?Light forces of the Navy. Their significance, tasks and ship composition
Military Reviewin Yandex News
Military Reviewin Google News
70 comments
Information
Dear reader, to leave comments on the publication, you must sign in.