Yeltsin against Gorbachev - the struggle of the country's destroyers 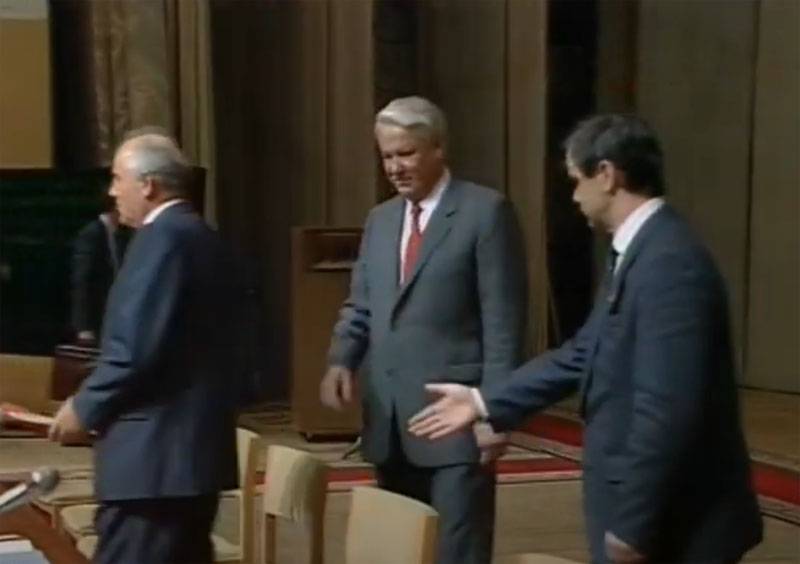 For what purpose are certain forces making more and more "stuffing" about "perestroika" and its "leaders"? To overcome once again the mental wounds of millions of people who became victims of the monstrous betrayal of the country by its leaders and the nightmarish experiments that these figures subsequently carried out on them? Or to whitewash the reputation of those who first destroyed the most powerful world power - the USSR, and then nearly ditched Russia too? Honestly, we are considered either too naive, or completely devoid of memory.


It is clear that in stories of our country, written by Messrs. Liberals, Yeltsin acts as a kind of "messiah" who managed to go beyond the "prophet" of "perestroika" Gorbachev, who still did not find the strength to officially declare that he was taking a course for the collapse of the USSR and the complete dismantling of socialism. A younger, more radical, and more determined leader has succeeded in completing what his forerunner began. It made the process irreversible, which, to the horror of the West that was waiting for the end of the Soviet Union, could still be slowed down, or even stopped altogether.

Boris Nikolaevich is trying to set out approximately this version in his memoirs, an excerpt from which has now become the reason for discussing his relationship with Mikhail Sergeevich. He de "became disillusioned with the General Secretary" because he wanted to lead the country along the "wrong path of changed socialism", and "chattered" the true reforms. Yeltsin, in his foresight, even then dreamed of leading our people to the shining heights of "true democracy" and "market society". Thus, which, as we remember, almost ended in complete destruction of Russia.

Even more fantastic are Yeltsin's assertions that he was "cautious" because he was "afraid of a civil war." It was he, the lamb and the dove of peace, who gave the order to hit the White House from tank guns, afraid of bloodshed? Yeltsin is trying his best to present himself as a "guardian of Russia" who opposed the union state in any form solely because "taxes would again begin to go to the center, and Russia would have no idea what." Let me assume that in reality everything was somewhat different. Even quite differently.

In Yeltsin, who was torn from a certain moment to the supreme power literally at any cost, the classic type of the appanage feudal lord was embodied. A kind of boyar who absolutely does not want to share with anyone his own “holy” right to “reign and rule” over “his” little people. And, by the way, rip them off like sticky - first of all. It is precisely because of this that he became that very destructive leader, on whom from a certain moment he began to rely on the West, "orchestrating" first "perestroika" and then the collapse of the USSR. And Boris Nikolayevich spared no effort to ensure that this stake was placed on him.

In the real history of his confrontation with Gorbachev and the allied party leadership, there is no "nobility" or breathtaking daring, which some adherents attribute to him to this day. Continuous wagging, a series of giveaways and outright deceptions.

Let us briefly recall this chronicle, which is far from coloring Boris Yeltsin. Ascended to the very top of the party career by the same forces that promoted Gorbachev, already at the November 1987 Central Committee Plenum, Yeltsin (at that time the first secretary of the Moscow City Committee of the CPSU) attacks Yegor Ligachev, who more than others has moved him up the career ladder. He is broadcasting about "too slow the pace of perestroika." He loses this round with a bang - "flies out" from a high position, and at the same time from candidates for members of the Politburo.

What happens next? Yeltsin tearfully repent of his "mistakes." He writes pleading letters to Gorbachev personally, begging him to "understand and forgive." The main thing is to restore the first secretaries in the capital. Either he is trying to commit suicide, or he is very skillfully staging such an attempt (which is most likely), he is ill at heart ... Mikhail Sergeevich shows unforgivable gullibility - and in the summer of 1988 Yeltsin finds himself on the rostrum of the XNUMXth All-Union Party Conference, with which ... in spite of all oaths and promises, he repeats his "seditious" performance, and even in a more harsh version. The same Ligachev, he demands to immediately withdraw from the Politburo. Sounds offended and surprised: "Boris, you're wrong!"

This phrase, speaking in modern terms, becomes a popular meme for years. And Yeltsin, meanwhile, feeling a taste for struggle without rules, is shifting his struggle for power from the party plane, where he has not the slightest chance, to the area of ​​"democratic bodies." By truth and, for the most part, by crook, he becomes a deputy of the Supreme Soviet of the USSR. Using the opportunities that have opened up, he continues a natural information and propaganda war against Gorbachev. He hits him with just that weaponswhich Mikhail Sergeevich gave into the hands of the “perestroika” - he does not hesitate to use the so-called “glasnost” opportunity to mix with impunity anyone and anything.

What happened later - we all remember very well. August 1991, GKChP, deposition of Gorbachev, dissolution and ban of the CPSU ... December 1991, collusion in Belovezhskaya Pushcha, collapse of the Soviet Union. Yeltsin's "historic" call to George W. Bush: "We did it!" Yeltsin fought Gorbachev not for "democracy", "freedom" or, even more so, "the future of the country." He pulled out with his teeth the right to become the new governor of the West on the territory of the largest wreck of a great power. In this he succeeded. The destroyers of the country did their job, simultaneously engaging in elements of struggle with each other. The people had to disentangle it - in many ways they still have to.

Ctrl Enter
Noticed oshЫbku Highlight text and press. Ctrl + Enter
We are
About Stalin and KhrushchevWhat you didn't want to know about England
Military Reviewin Yandex News
Military Reviewin Google News
111 comments
Information
Dear reader, to leave comments on the publication, you must sign in.