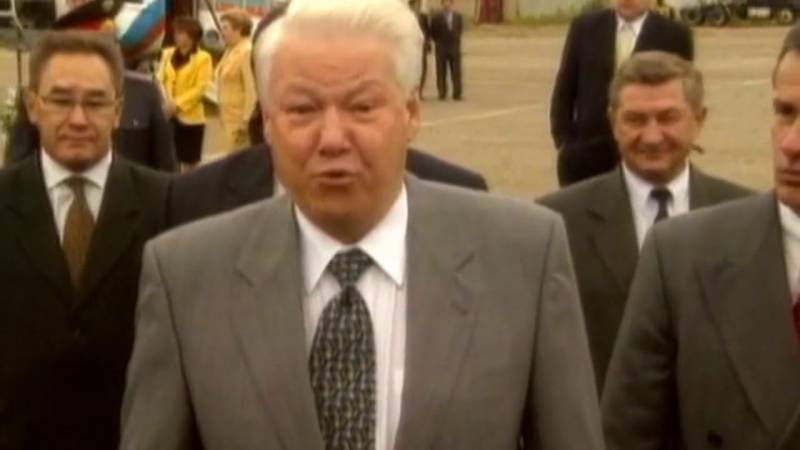 The start of the destructive processes in the domestic economy was given by all those "gains of perestroika", which its adherents called "the transition to market relations", hiding behind these words the destruction of the powerful national economy inherited from the USSR and the robbery of the country's population. Collapsed industry and agriculture, trade, which was ruled by outright speculators - all these industries, of course, could not fill the budget. The money was needed, but there was nowhere to take it.

Inflation beat all conceivable and inconceivable records already in 1993, it came close to the level of 1000%! By 1994, the Kremlin understood that it was impossible to continue filling the treasury by continuing to print empty pieces of paper instead of rubles. It was necessary to find another way out. And they found him ...

Wholly and completely following the lead of the newly acquired "friends" and "partners" from the West, the "reformers" at the head of Russia did not think of anything better than to follow the path of more and more large-scale borrowings. The country was driven into debt, while telling the Russians about

“Ways to overcome the crisis”.
Indeed, the economic situation in the following short-term period has somewhat normalized. Inflation in 1997 was only 14%, and the budget deficit more than halved. Another question is what “levers” were used to achieve this.

The ruble was artificially overvalued. And its official ratio to world currencies had nothing to do with reality.

The money supply was catastrophically lacking. And the result was a multitude of problems - from months of non-payment of wages, benefits and pensions to the transition of the economy to barter relations. The state itself constantly found itself in the role of "scammers", not fulfilling its obligations to enterprises.

The financial lifesaver of that time was the government short-term bonds, which appeared in 1993, which had an incredible (for securities of this kind) yield of 60% per annum, while the world practice was 4–5% per annum.

By 1997, this process took on even more distinct features of a natural financial pyramid - with quite predictable consequences.

Russia, no matter how much it issued new GKOs, could no longer pay off the old obligations. These were the first signs of an impending global collapse.

Many experts consider the last straw to be the decision taken at the end of 1997 to remove from January 1, 1998 any restrictions and prohibitions on the export of capital from Russia.

Currency poured out of the country like Niagara Falls, the GKO market simply collapsed. But if Russia only played this game ...

By the time the default was declared, we owed the World Bank and the International Monetary Fund, “kindly supported” our country, as well as other foreign creditors over $ 36 billion. This is with the Central Bank's cash reserves of $ 24 billion. The collapse has come.

Among other things, it was accompanied by the “disappearance” of about $ 5 billion from a targeted loan allocated by the IMF to save the Russian financial system.

Disputes about whether this money was stolen even before it was transferred to our country or whether it "dissolved" already in its vast expanses is still going on. However, the fact remains that there was nothing more to pay the debts with.

Additional negative factors that finally finished off our economy were the financial crisis that broke out in Southeast Asia and another sharp drop in energy prices.

There will be no devaluation - but you hold on

Many Russians to this day remember the words of the then president of the country, Boris Yeltsin, exactly three days before the complete collapse of the domestic financial system "clearly and firmly" declared to citizens who were beginning to lose their heads from what was happening:

"There will be no devaluation!"

Everything is calculated, yeah ...

This was said on August 14, and on the 17th, the government and the Central Bank officially declared a technical default and finally “let go of the ruble”.

The country had to go through some of the hardest in its stories years old...

Everyone who lived in those days remembers the chaos and despair that reigned, the hopeless queues at the doors (which refused to give out even a penny from your own hard-earned savings) banks, the shock of the numbers on the signboards of exchangers and on the price tags of stores.

The feeling of complete hopelessness and the crumbling world around them seized many. People have lost not only all or almost all of their savings, but also some perspective for the near future. Sometimes it seemed like the end had come.

Be that as it may, Russia, contrary to the expectations of many, did not collapse.

Yes, GDP has decreased threefold, reaching a meager value. External debt increased to $ 220 billion, bringing the country to the very top of the list of states whose loan obligations were many times higher than their revenues. Devaluation and inflation, again broke into unrestrained growth, ruthlessly devaluing all the earnings and savings of Russians, and at the same time eating up new holes in the budget.

Nevertheless, that crisis became a fulcrum for the new growth of our Fatherland.

The forced abandonment of imports that became insanely expensive at once spurred the development of Russian industry, created real prerequisites and conditions for it.

“Black Monday” on August 17, 1998 ultimately benefited Russia, which by that time was finally turning into a raw material appendage of the West.

It emerged from this crisis refreshed, more competitive, wealthy and strong.

But those who that day stood above the wreckage of their own broken hopes and destinies, of course, could not foresee this.

Author:
Alexander Kharaluzhny
Photos used:
screenshot of the video of B. Yeltsin's speech: "There will be no devaluation!"