Bordyuzha: Belarus’s partners in the CSTO will support Minsk in confrontation with the EU 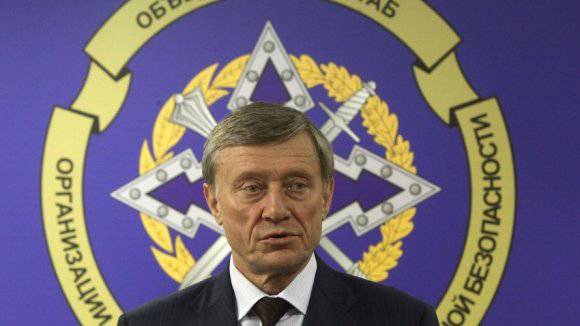 The EU’s application of sanctions against the official Minsk is unacceptable, unjustified, a sign of anachronism and violation of the fundamental principles of the OSCE. 16 of August was announced in Minsk by the CSTO Secretary General Nikolai Bordyuzha.

“There are a lot of statements that were signed by the presidents of our states, by the foreign ministers who clearly expressed the opinion that sanctions against Belarus are, firstly, unjustified, and secondly, they will not bring any results,” Bordyuzha said. “Most importantly: this is a violation of the fundamental principles that are laid down in the organization for security and cooperation in Europe, the CSTO Secretary General added. “Especially restrictions on entry into countries — I think this is generally an anachronism."

The CSTO Secretary General also informed journalists that an “information war” is being waged against Belarus, and the republic’s partners in the organization will support the official Minsk in confrontation with the European Union.

Bordyuzha takes part in events in Minsk dedicated to the improvement of the work of state structures of the CSTO member countries and the organization itself. In particular, the organization’s secretary general is participating in the CSTO emergency coordination committee (CSES) meeting held in the 5th meeting. Following the meeting, it is planned to develop a set of solutions for creating a single information and software space and organizing the humanitarian response of the CSTO countries, to consider the plan of exercises and other joint activities of the KSChS for 2013.

According to Bordyuzha, emergency response and the prevention of such should be a priority of the CSTO. The organization's secretary general also reported on the agreement reached to hold regular joint exercises on emergencies at test sites in Russia, Belarus and Kazakhstan.

As REGNUM news agency reported, 15 of August in Minsk Russian Foreign Minister Sergey Lavrov said that Russia and Belarus should not respond with sanctions on EU sanctions. Lavrov called the “anti-Belarusian” resolution of the UN Human Rights Council A / HRC / 20 / L7 of July 5 and noted that the EU had become “infected” by the United States with the use of unilateral sanctions, which are unprofitable in Brussels.

Recall that in respect of representatives of the official Minsk (243 of natural persons and 32 enterprises) there are sanctions of the European Union and the United States, to which their closest allies also joined. The EU’s “black list” includes Alexander Lukashenko, his elder sons Viktor and Dmitry, as well as the head of the Central Election Commission of Belarus, police officers, judges, state media officers, and others.

We also recall that in March 2012, the heads of government of Belarus, Kazakhstan and Russia made a joint statement in which they condemned the EU and US sanctions against the official Minsk. "Acting in the spirit of a common approach, agreed upon by the heads of state of the Republic of Belarus, the Republic of Kazakhstan and the Russian Federation, and also taking into account the repeated statements by the US and the European Union about the possibility of applying economic restrictions to one of the member states of the Customs Union / Common Economic Space of the Government of the Republic of Belarus, Republic of Kazakhstan and the Russian Federation confirm the inadmissibility of the use of measures of economic pressure or coercion ", - said in a joint statement nii premiers of the CU and SES.